"Britain's Dragonflies: A Field Guide to the Damselflies and Dragonflies of Britain and Ireland (Third Edition)", by Dave Smallshire and Andy Swash, was published in 2014.  It's 224 pages, a paperback but comes in a clear plastic sheath for protection, and costs $25.95.

Once again, I feel rather sheepish for reviewing a book that covers things I'm so clueless about.  Although I've been increasingly interested in dragonflies and damselflies for the last 5 years, I've never even been to Britain... or anywhere in Europe for that matter.  So why review this book?  Because I honestly enjoy scanning through the many species I've never heard of before, learning how other authors organize their books, and... well... because I'm a low-level field guide hoarder!

Because I already find myself so fascinated with bird and butterfly identification, rarely does someone ask why I'm into dragonflies.  When they do, however, I'll totally flip to this page: 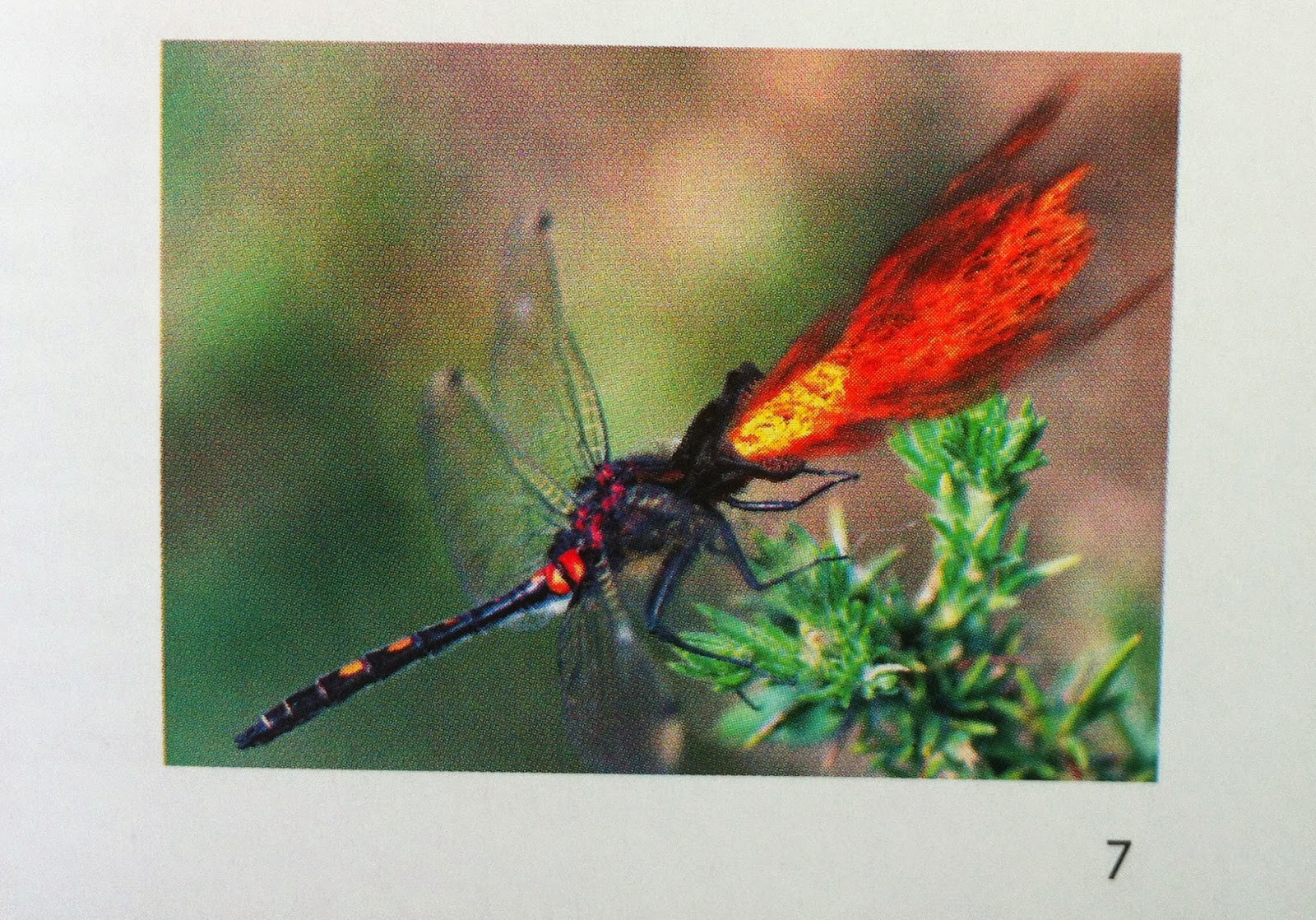 Unfortunately this was just an add-on image during an introduction piece BUT I like where they were going with it.

I mentioned the introduction though; I was more impressed with this introduction than any other I've seen in a dragonfly field guide.  For starters, the book covers many of the standard items such as this plate of key features of damselflies: 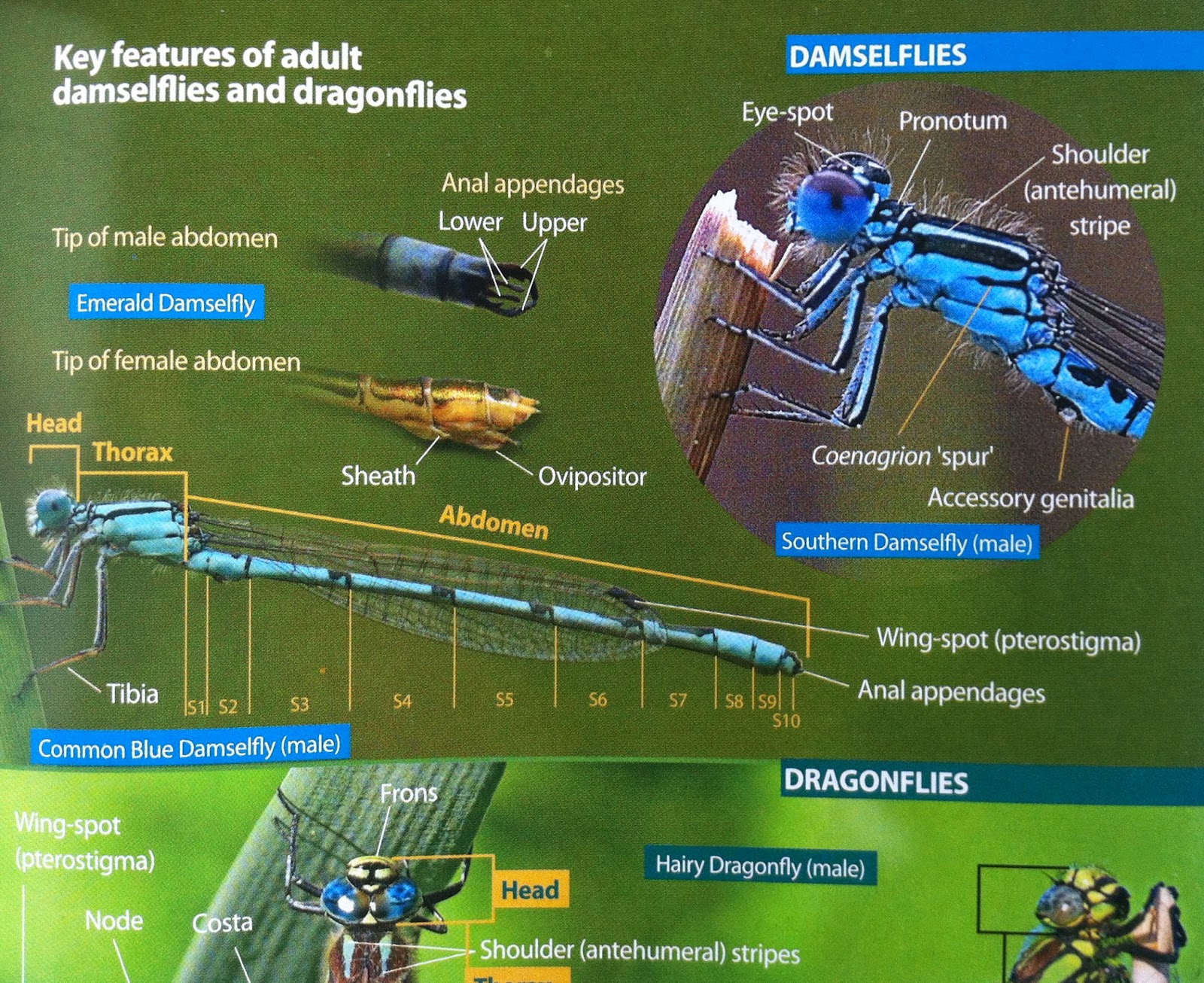 It's a bit obvious to put into words but one really should try to learn these parts so that when the guide mentions S7-S8, you won't be completely lost as to what they're talking about.

This introduction also has some plates focusing on identifying dragonflies in flight which is another item I rarely, if ever, see in a dragonfly field guide.  Here are two sample plates: 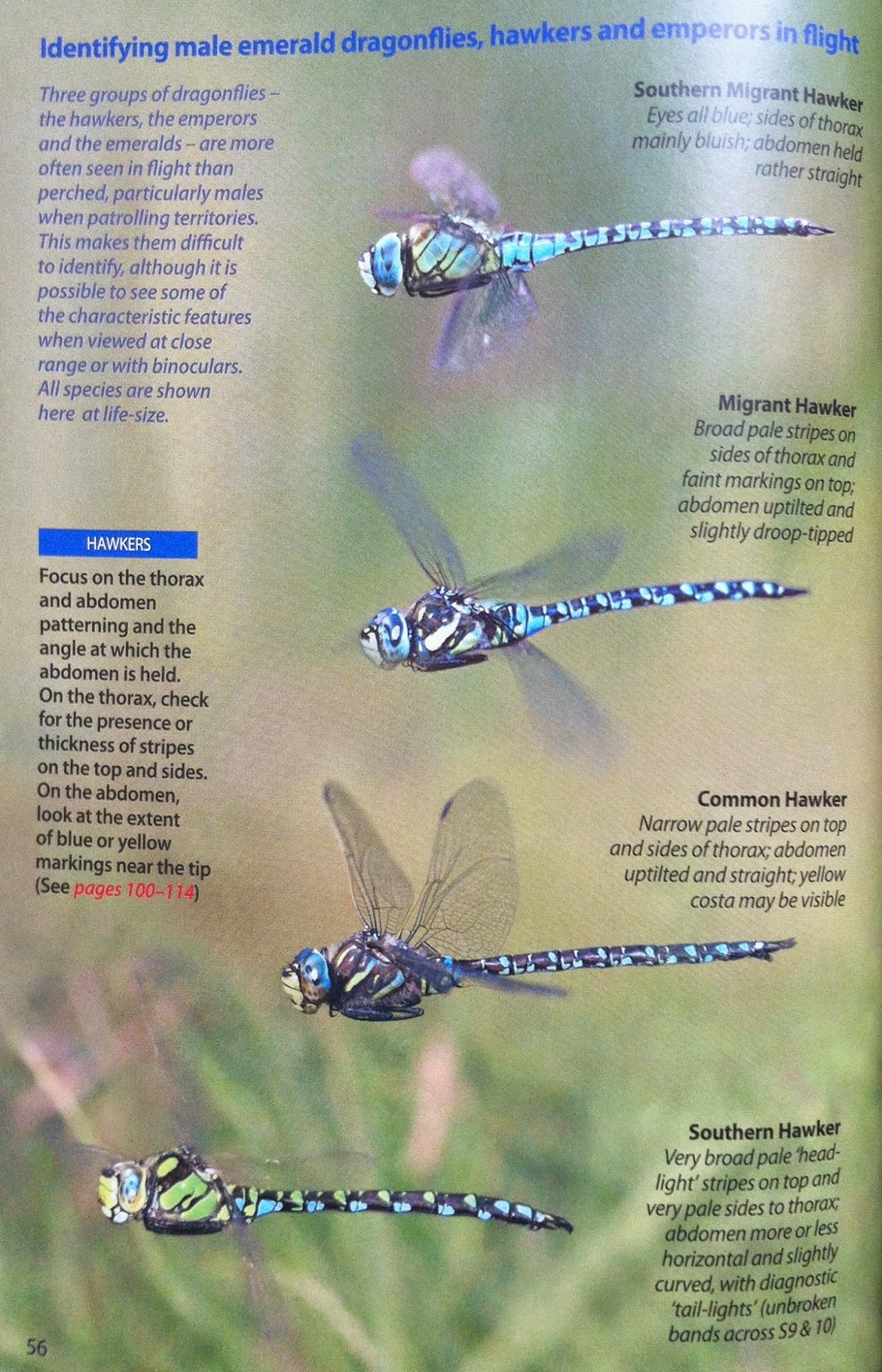 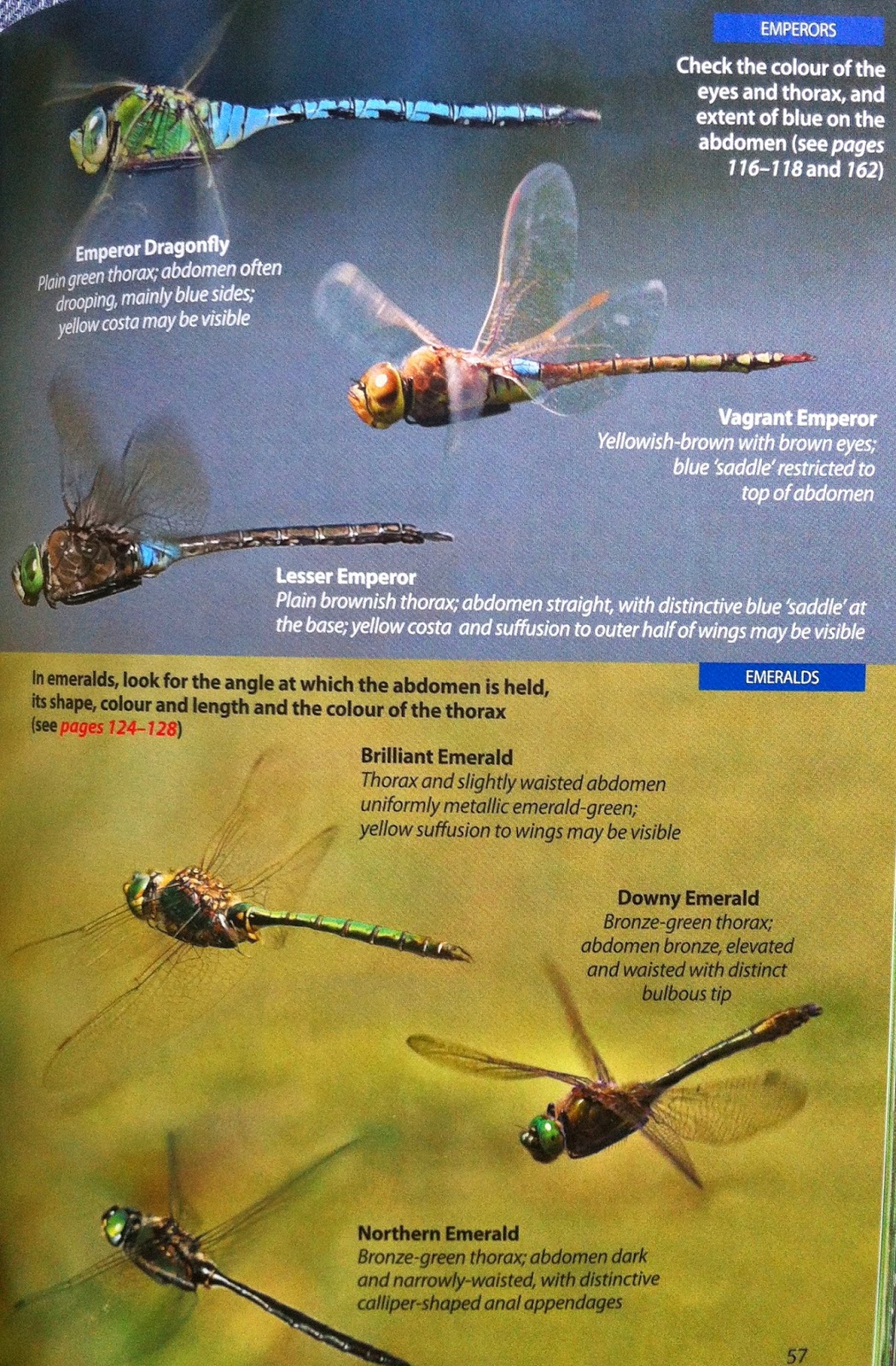 In an another attempt to help the reader identify what they're looking at, the authors include this "type guide"; match what you're seeing to the general type of bug and you're theoretically off and running: 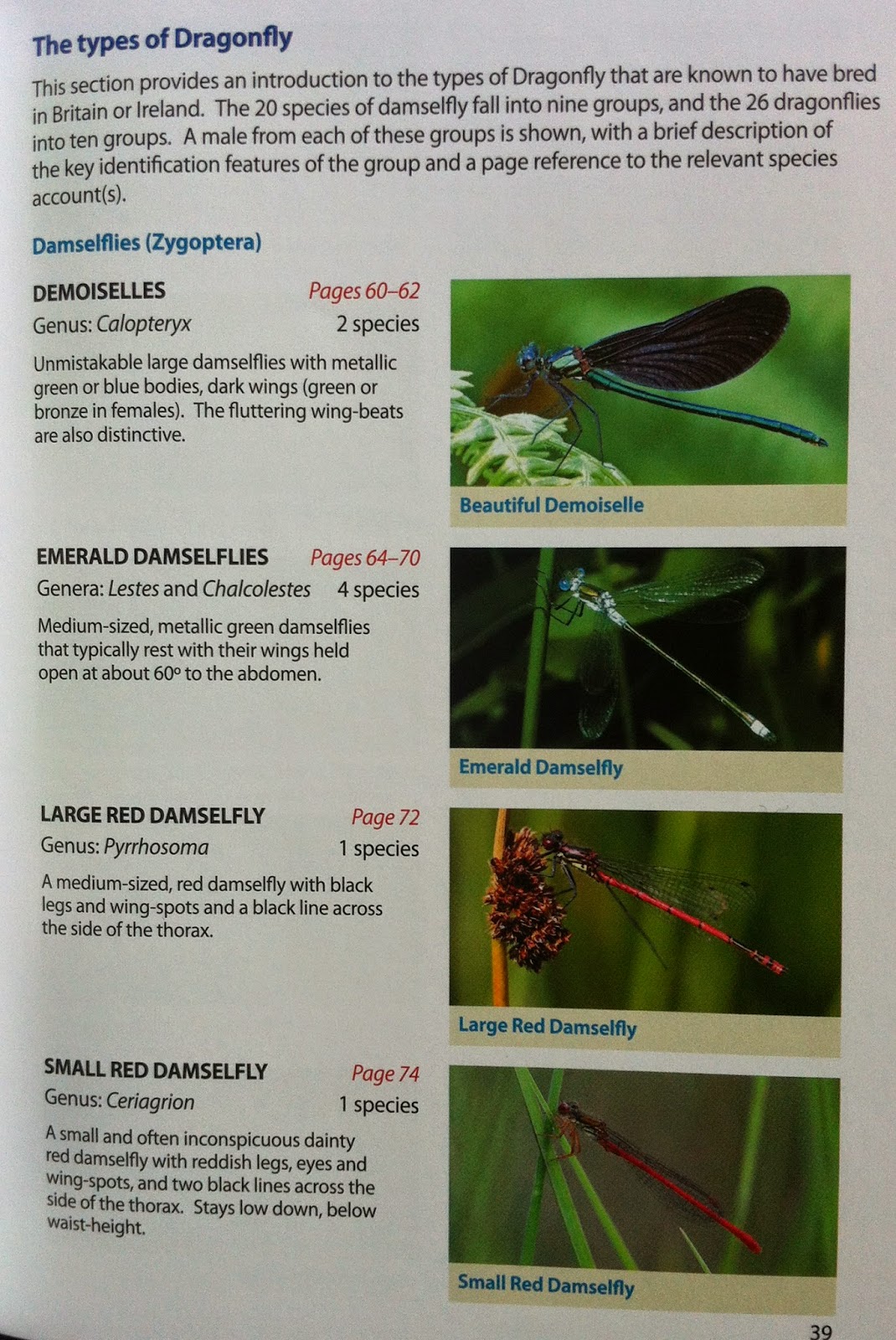 One area where this book really does go beyond the minimum requirements is the many pages of charts that help simplify the identification process.  For example, here's a chart that shows life-size abdomen and thorax illustrations as well as notes on head and wings (males on the left, females on the right): 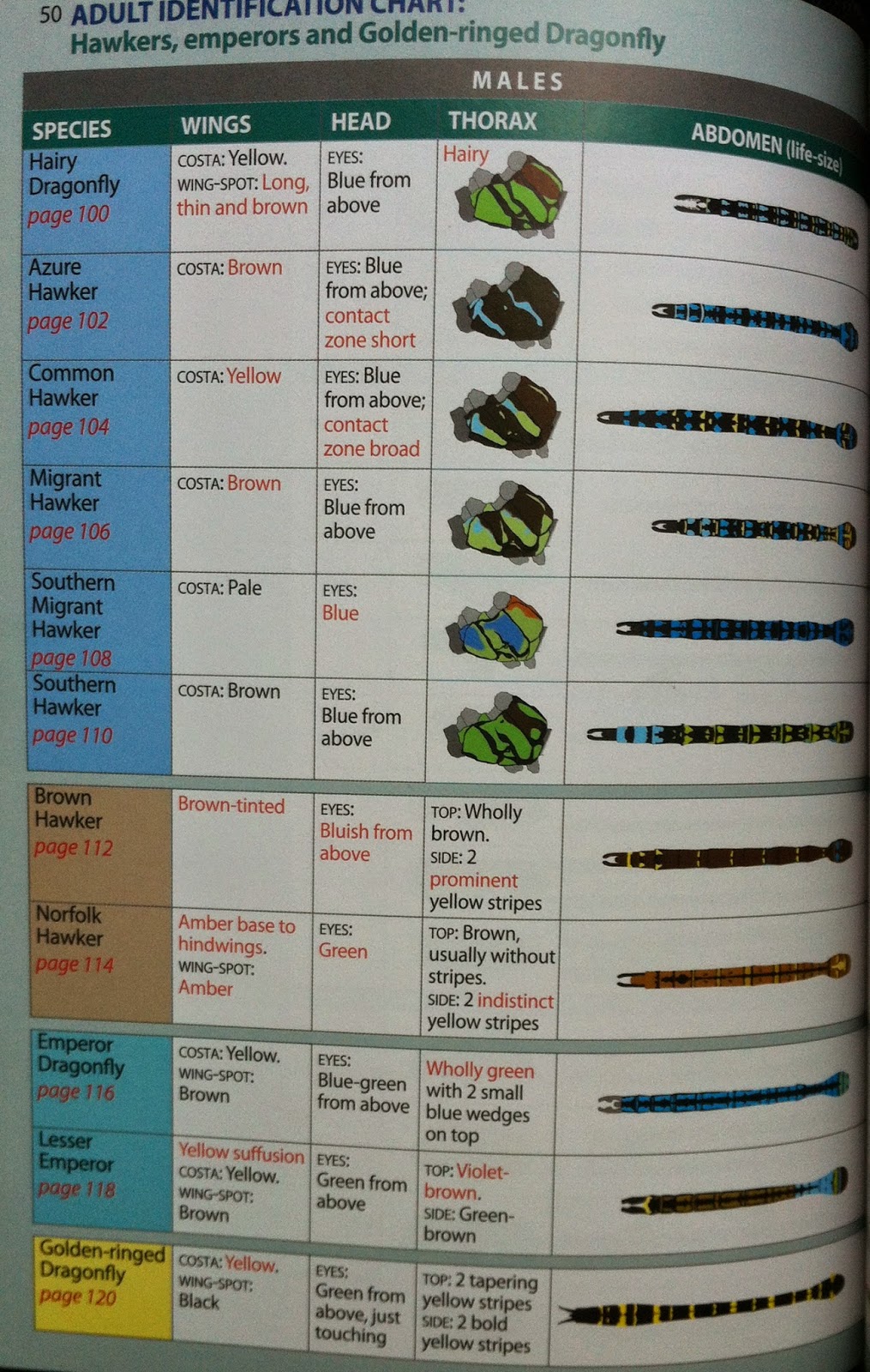 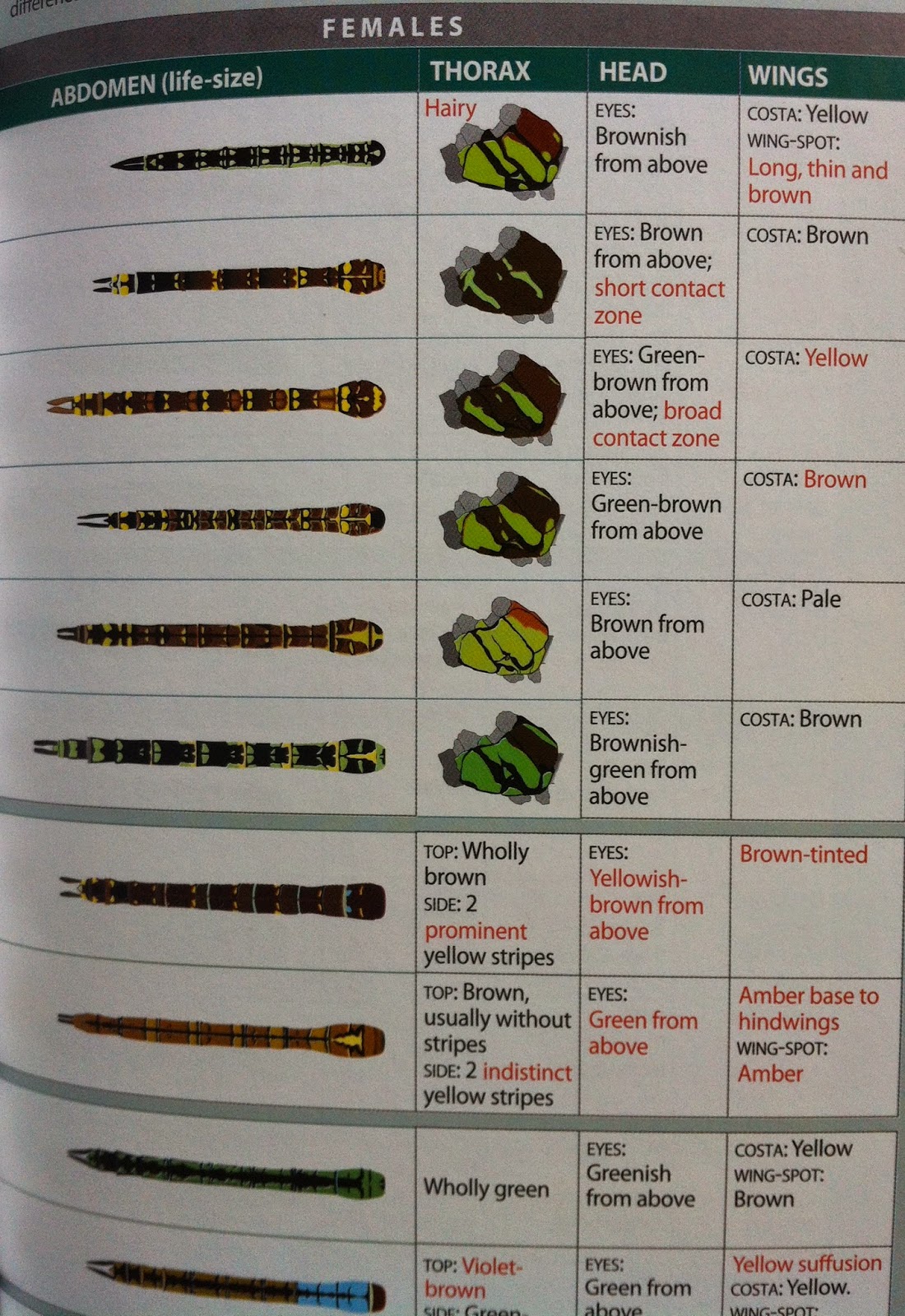 Now, why haven't any guides here in the US figured this out?


Once you get down to the actual species accounts, you'll see a spread like this: 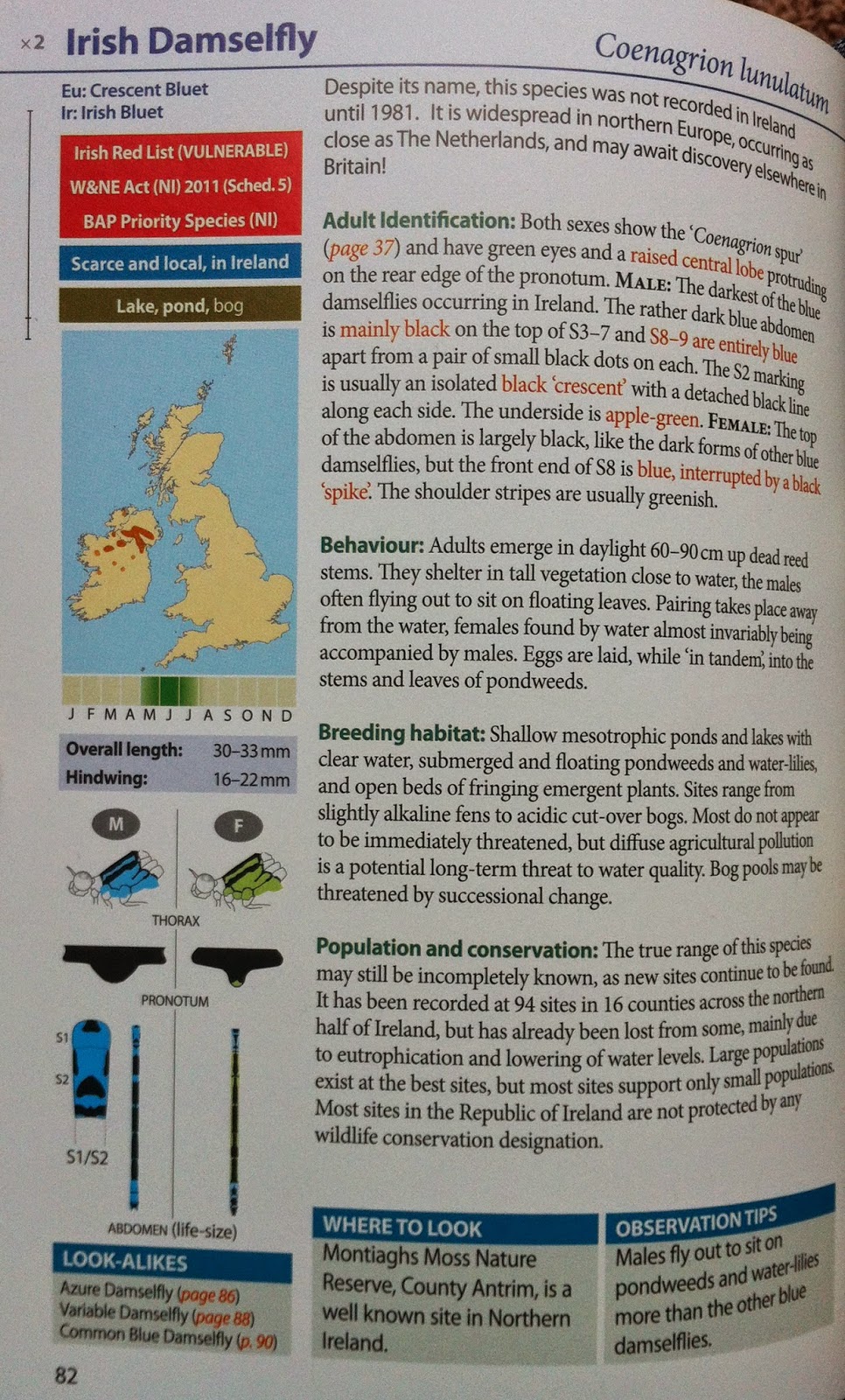 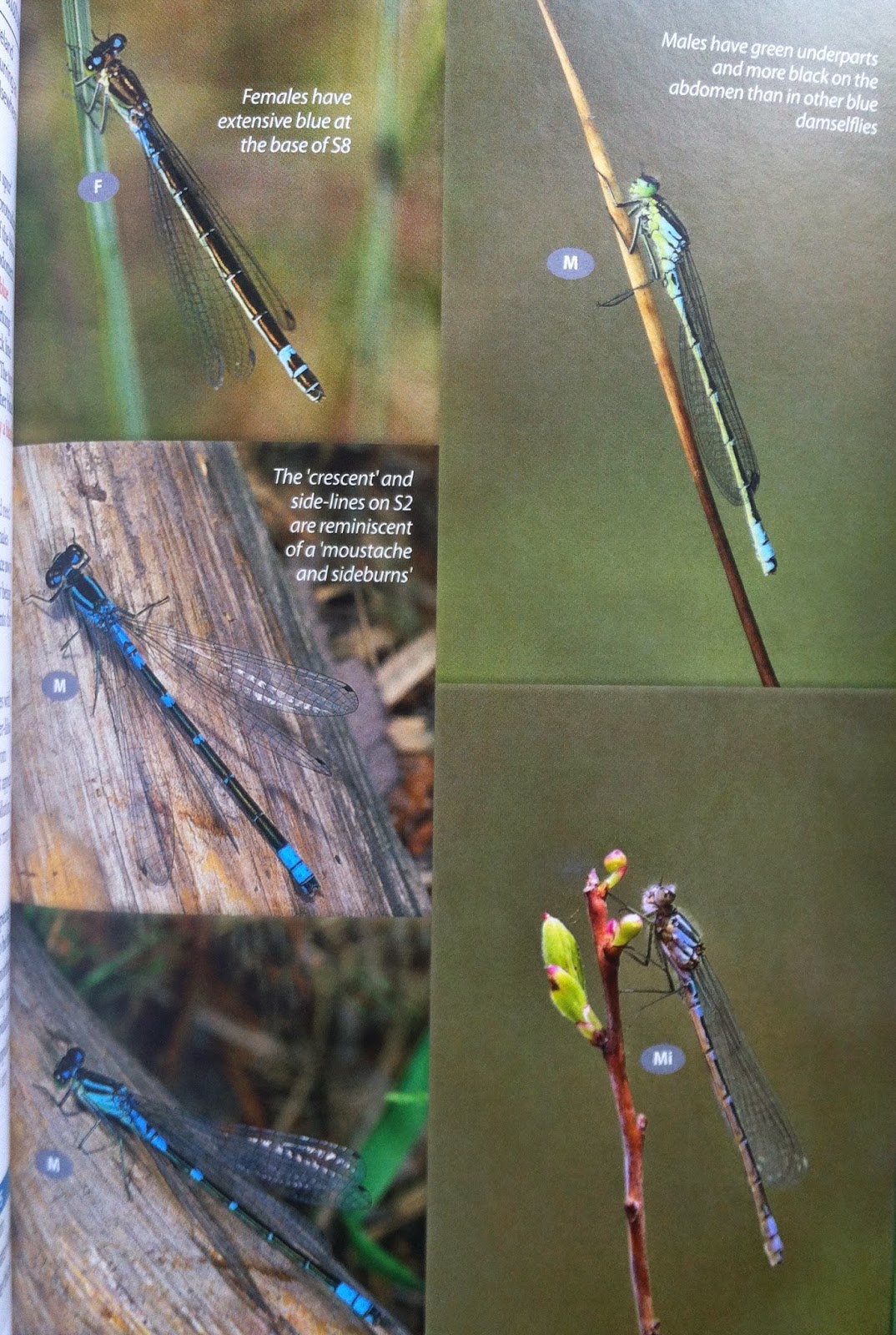 Taking a closer look at the Small Spreadwing species account, I'll point out a few things: 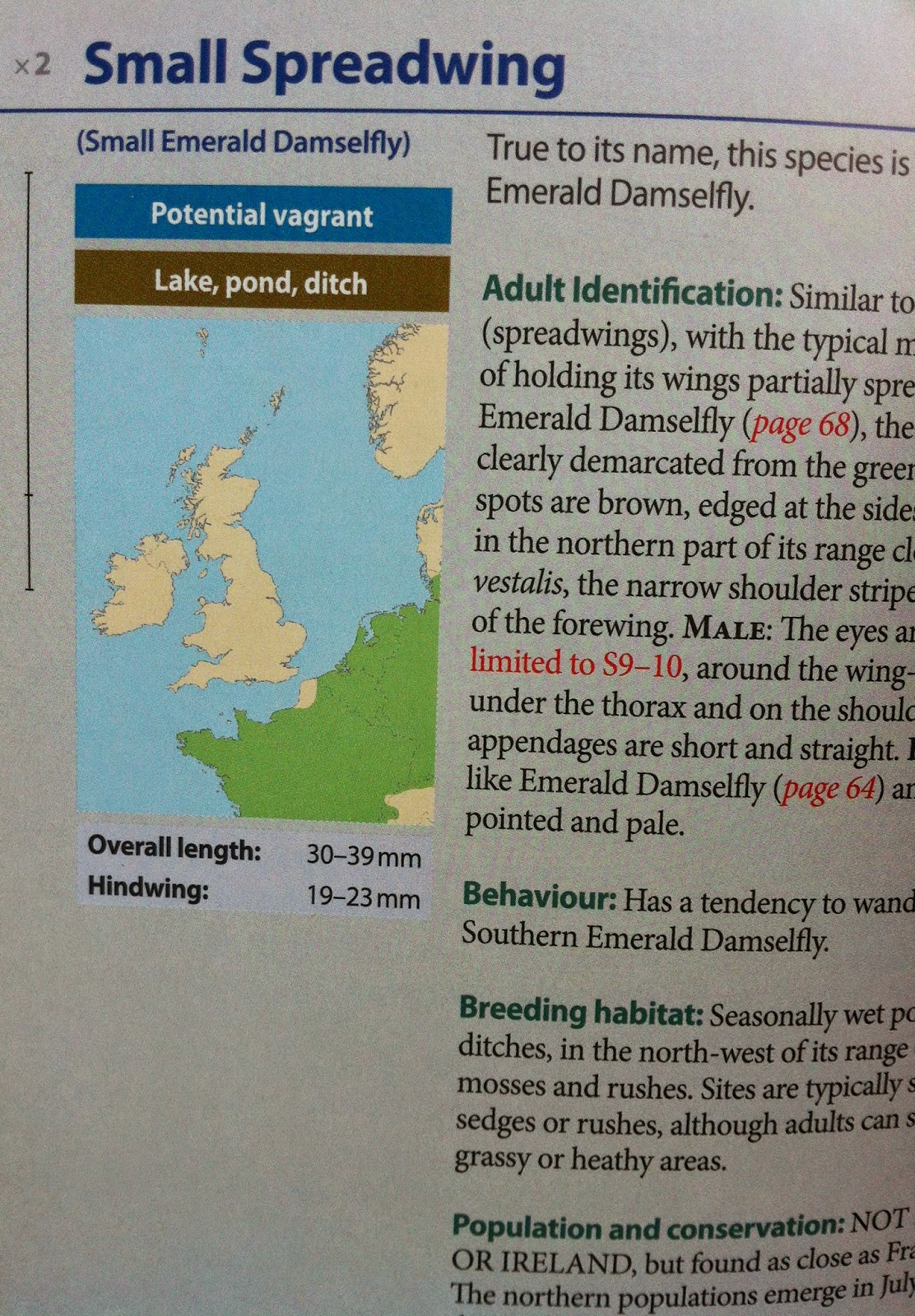 First up, you'll see they cover alternate names below the common name.  This is always a good idea to keep aggravated novices from chucking their guide into a pond.

Secondly, you'll see a little "x2" next to the name.  That indicates that the photos on the opposite spread are twice the life size of the actual species.

Also, you might have missed it but look at the far left part of the page; you'll see a vertical line.  This shows the life-size length of the species.  You'll see a hash mark 2/3 down that line; that indicates the minimum length whereas the bottom mark indicates the maximum length.

Here's another species to look over: 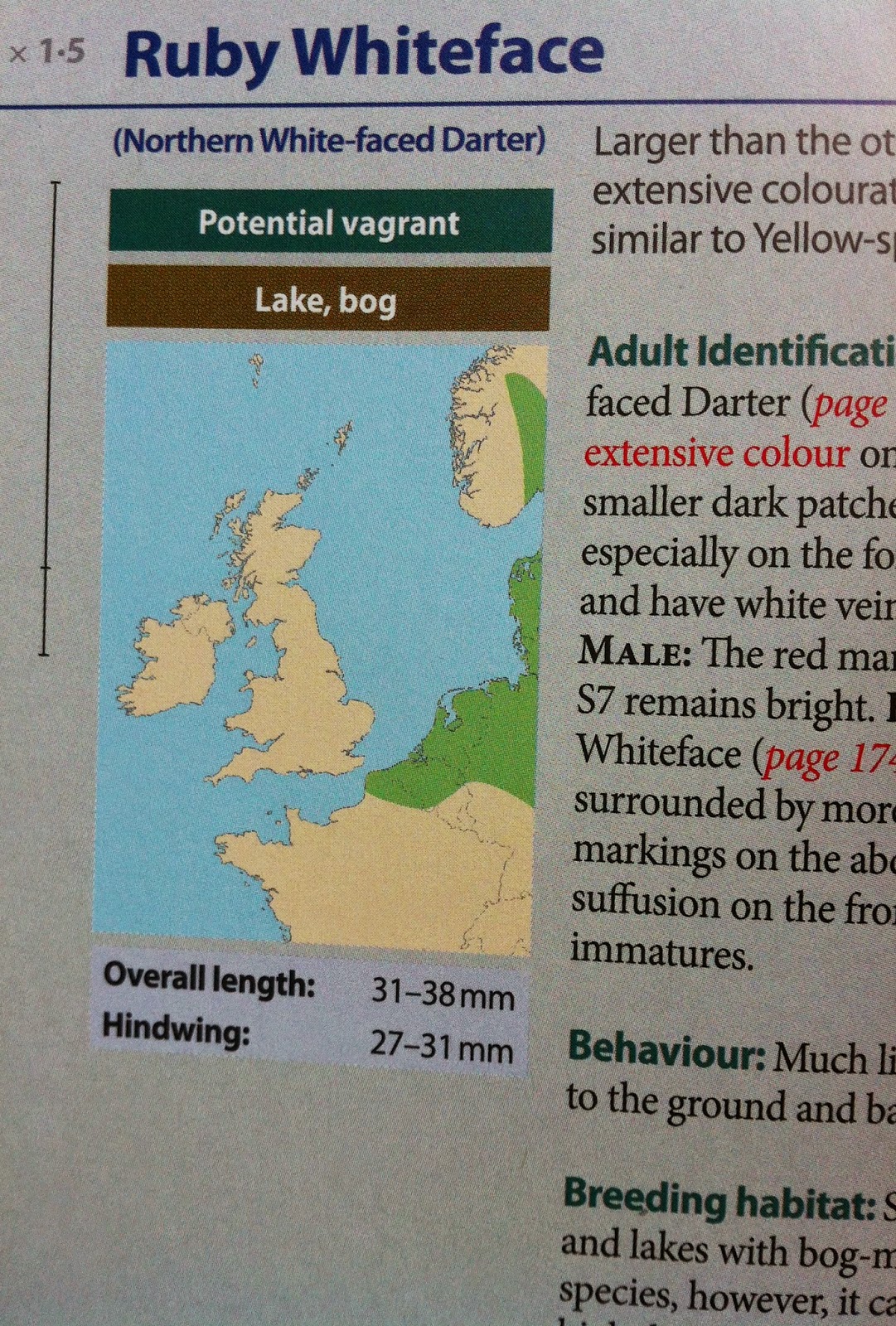 Farther down the page they include this nice life-size illustration of male/female abdomens: 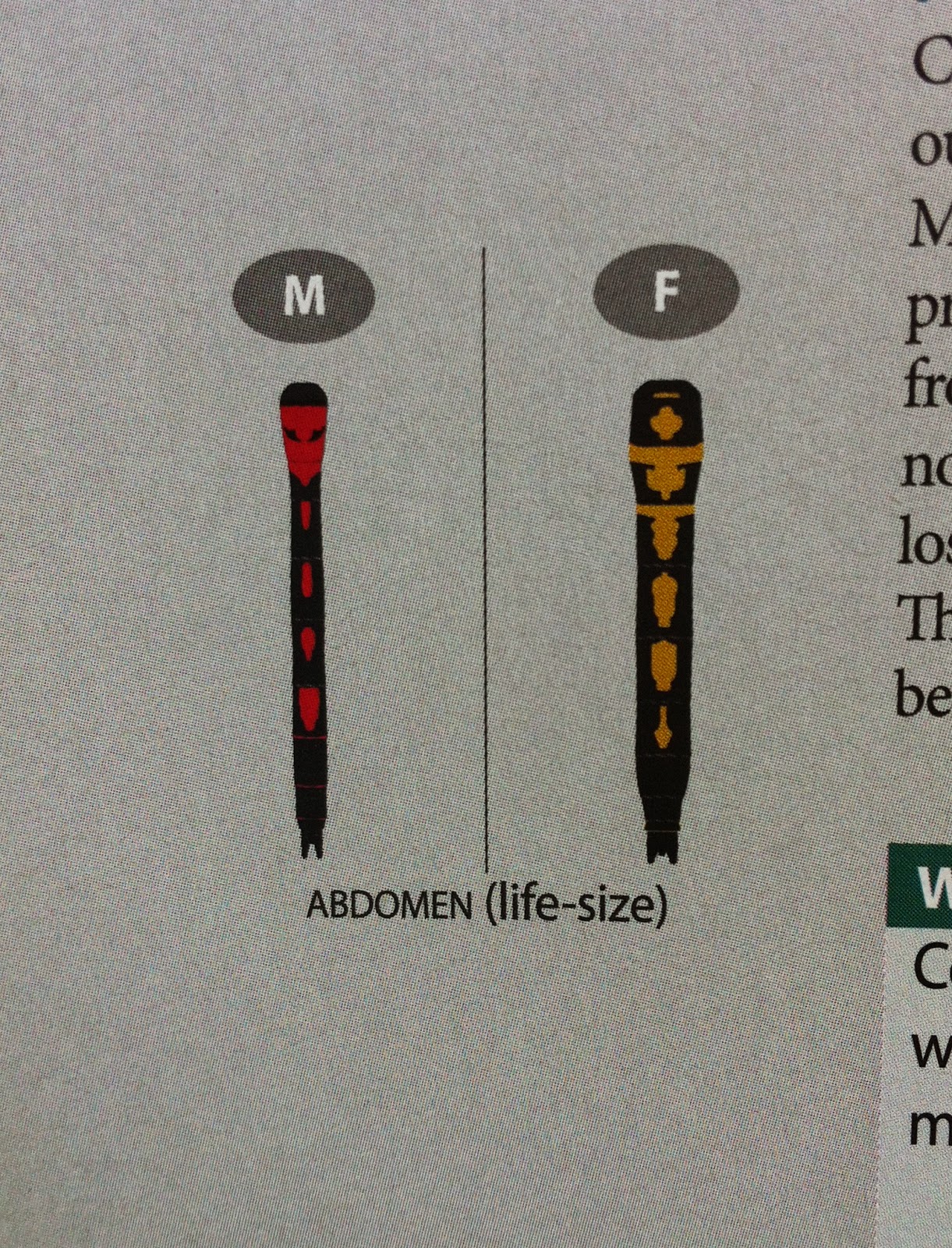 And of course, they include some photos on the opposite spread to even things out: 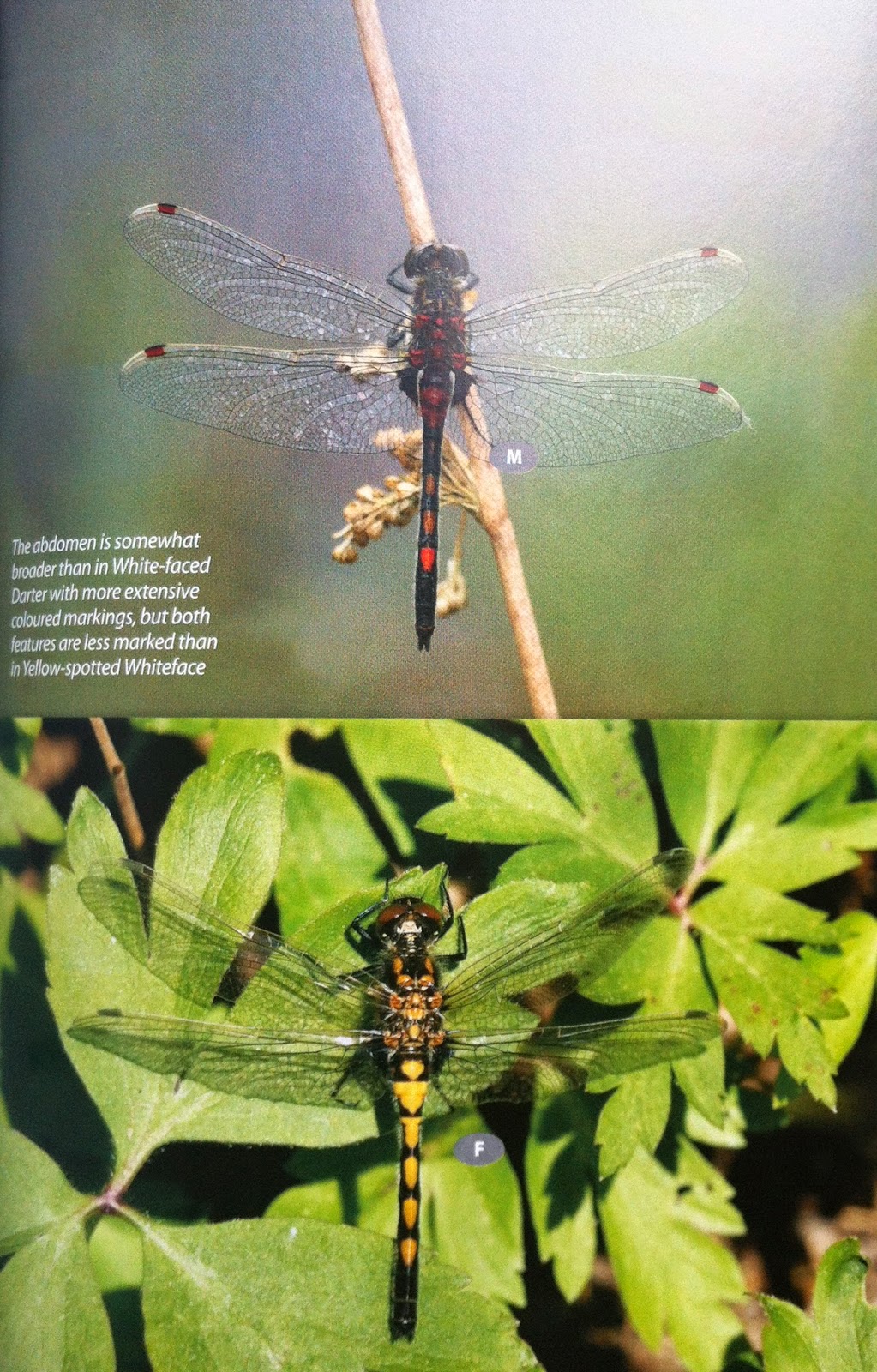 Here's another spread to glance at, this one for the Scarce Emerald Damselfly: 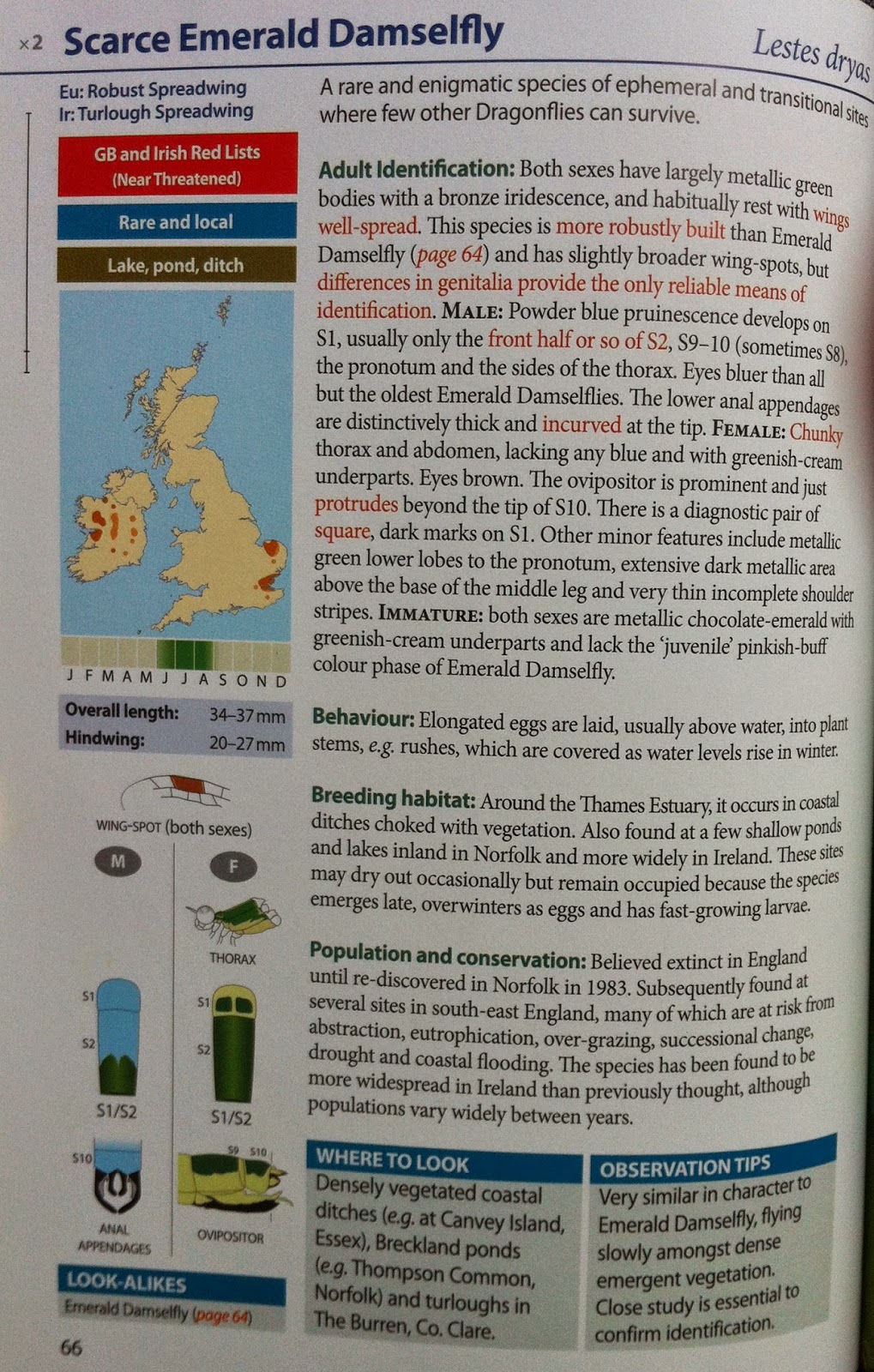 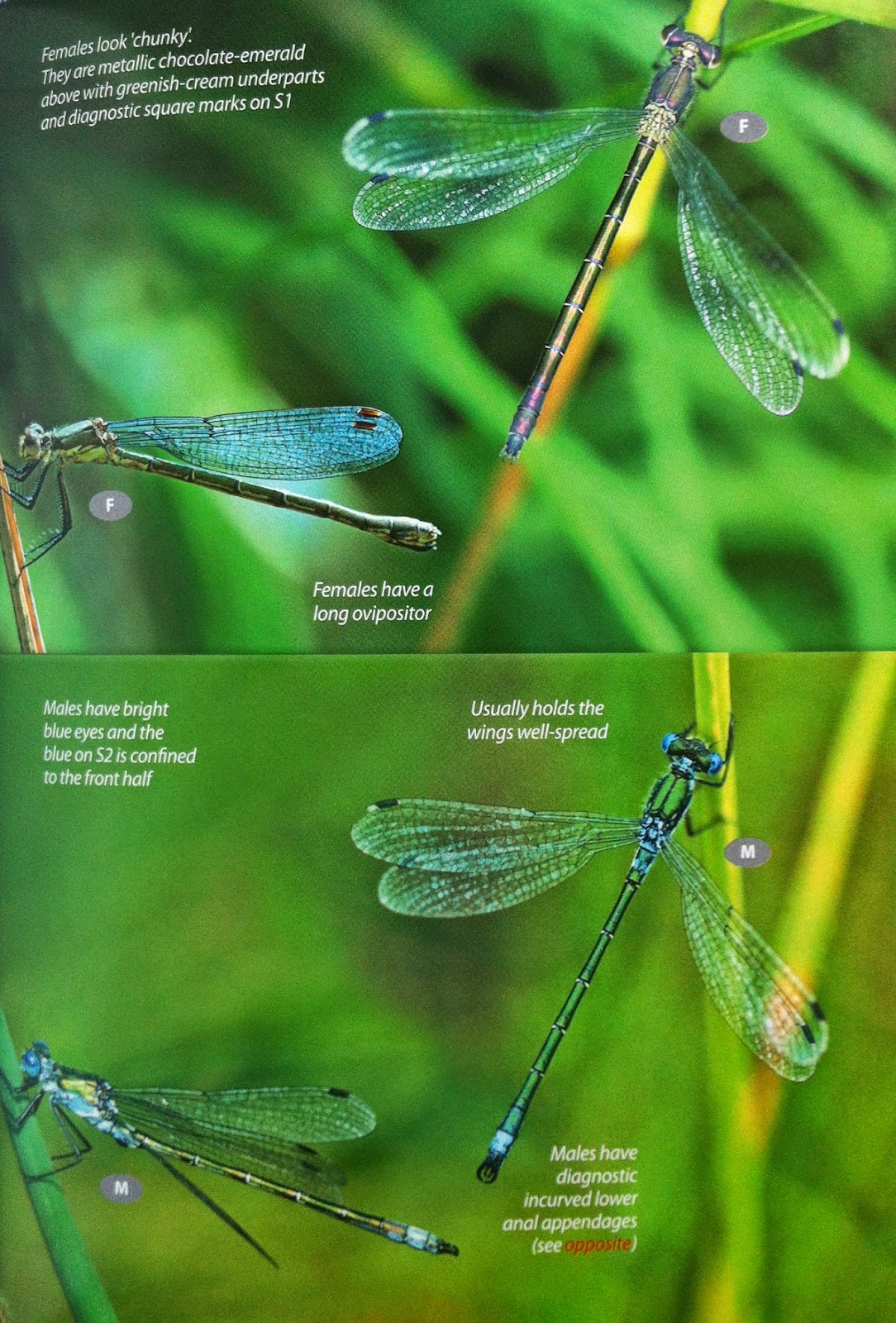 Under the distribution map, you'll notice a temporal seasonality chart.  For example, this species is most-likely to be encountered starting in June, then peaks in July, and then they start to dwindle by the end of August.

A lot of field guides that cover dragonflies and damselflies would just end there.  Of course, it's the colorful and flying insects that captures the attention of the most casual observer.  However, there is a whole other side to identifying these creatures and this field guide is the first one I've seen tackle this daunting task.

THE EGGS AND LARVAE

Seriously, I've never seen such a collection of data on identifying dragonfly eggs and larvae; it's really refreshing to see for once!  At the start of this section, which is at the back of the book, you'll see a table covering hatching time, larval micro-habitat, adult emergence, peak season, etc.  Take a look: 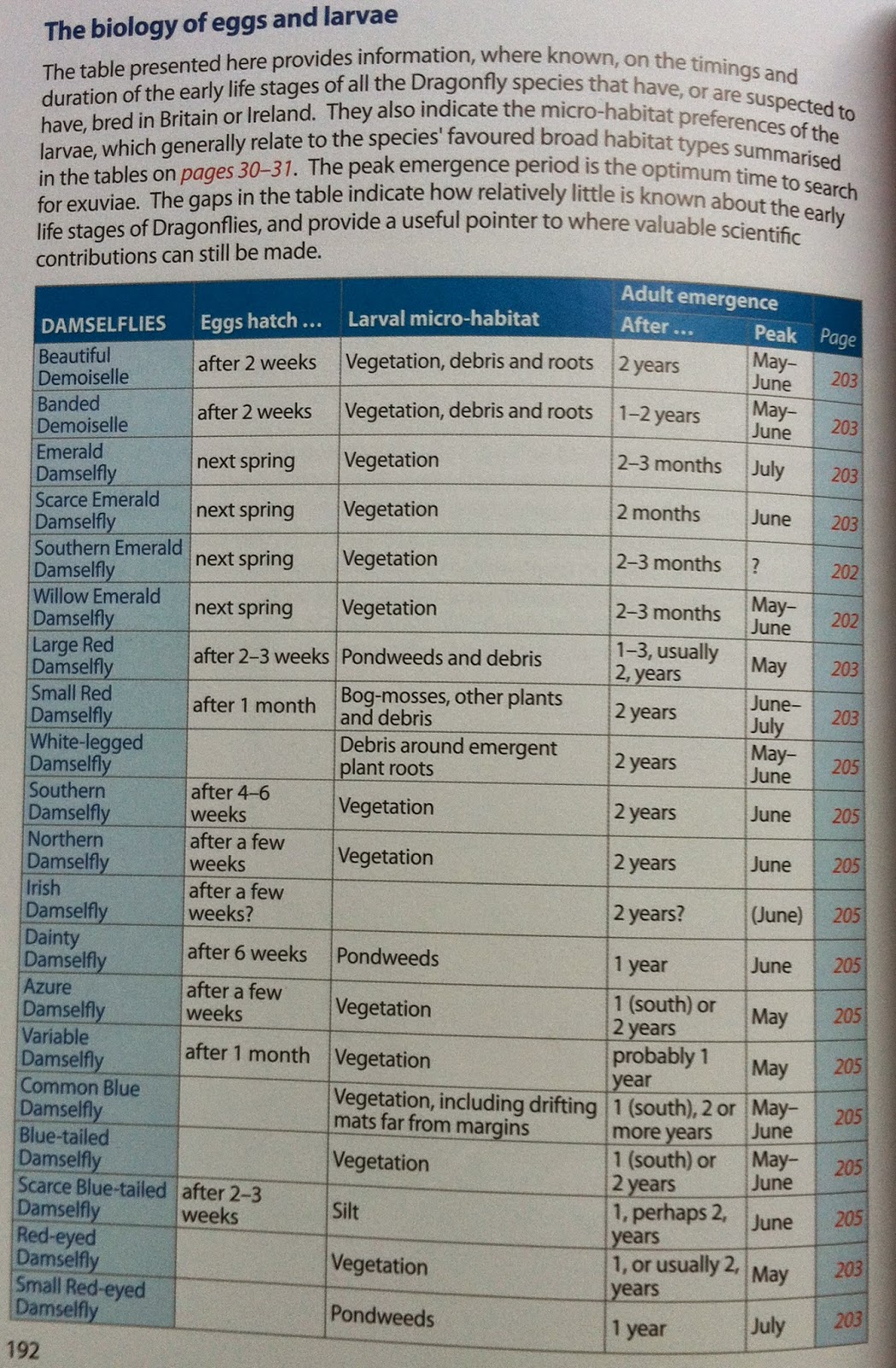 If that chart wasn't enough to get you nodding your head in agreement that you don't know the first thing about larvae, they have full illustrations, photographs, and close-ups on how to ID these aquatic denizens.  Here's an example page: 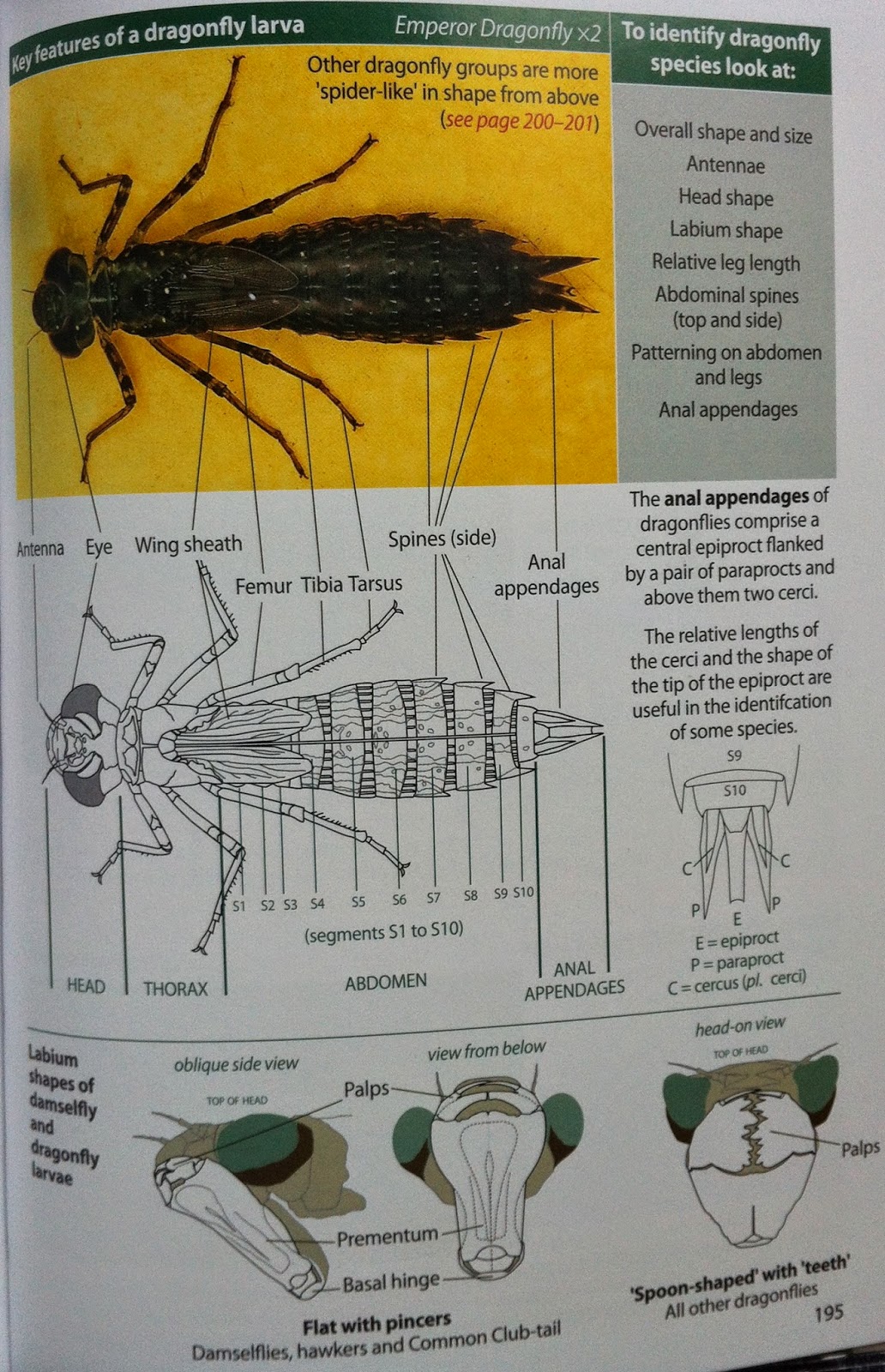 They also do this by family too; here you see some general examples of emeralds, chasers and skimmers, and darters: 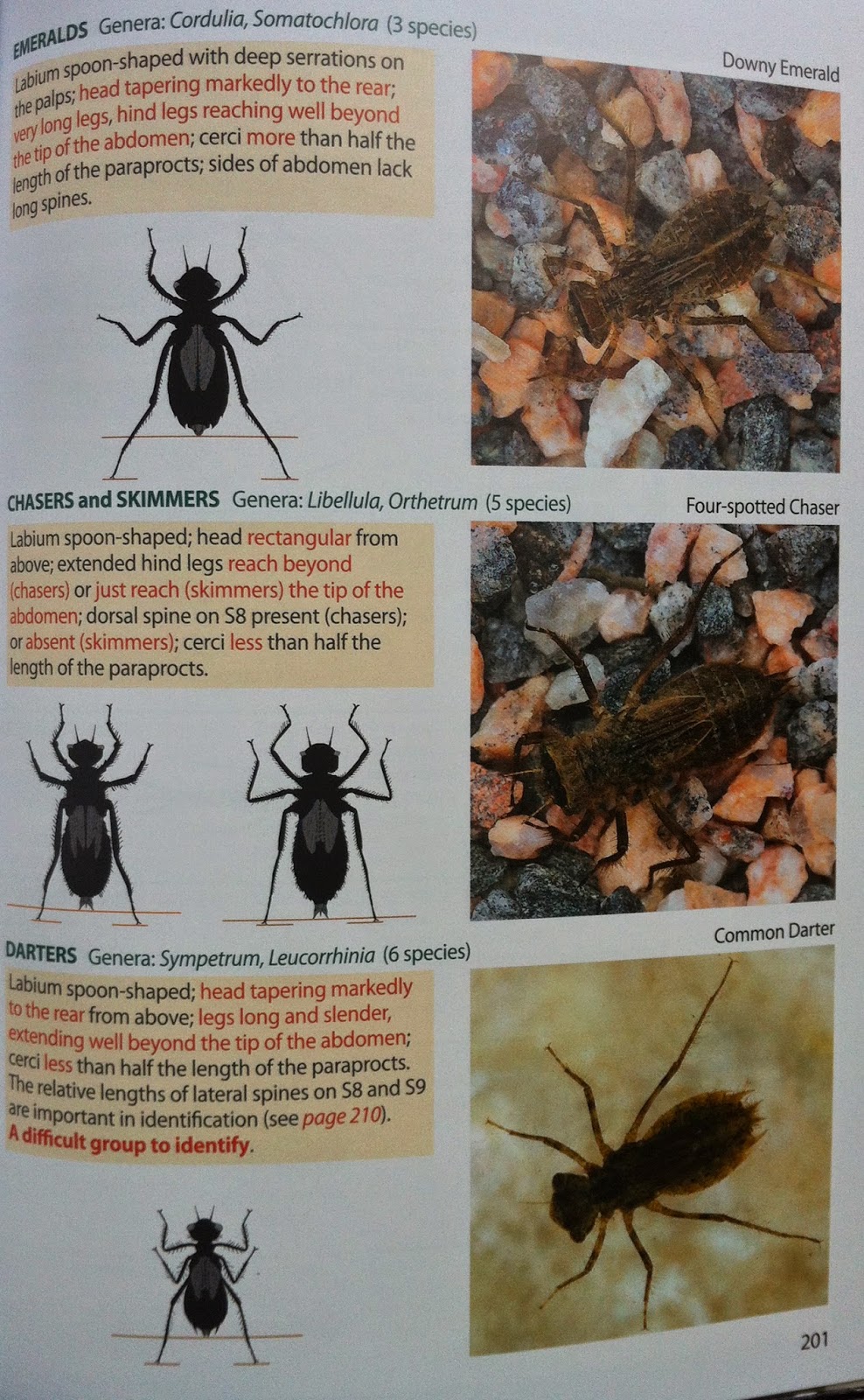 I'll leave you with... this intensely detailed plate on larvae ID: 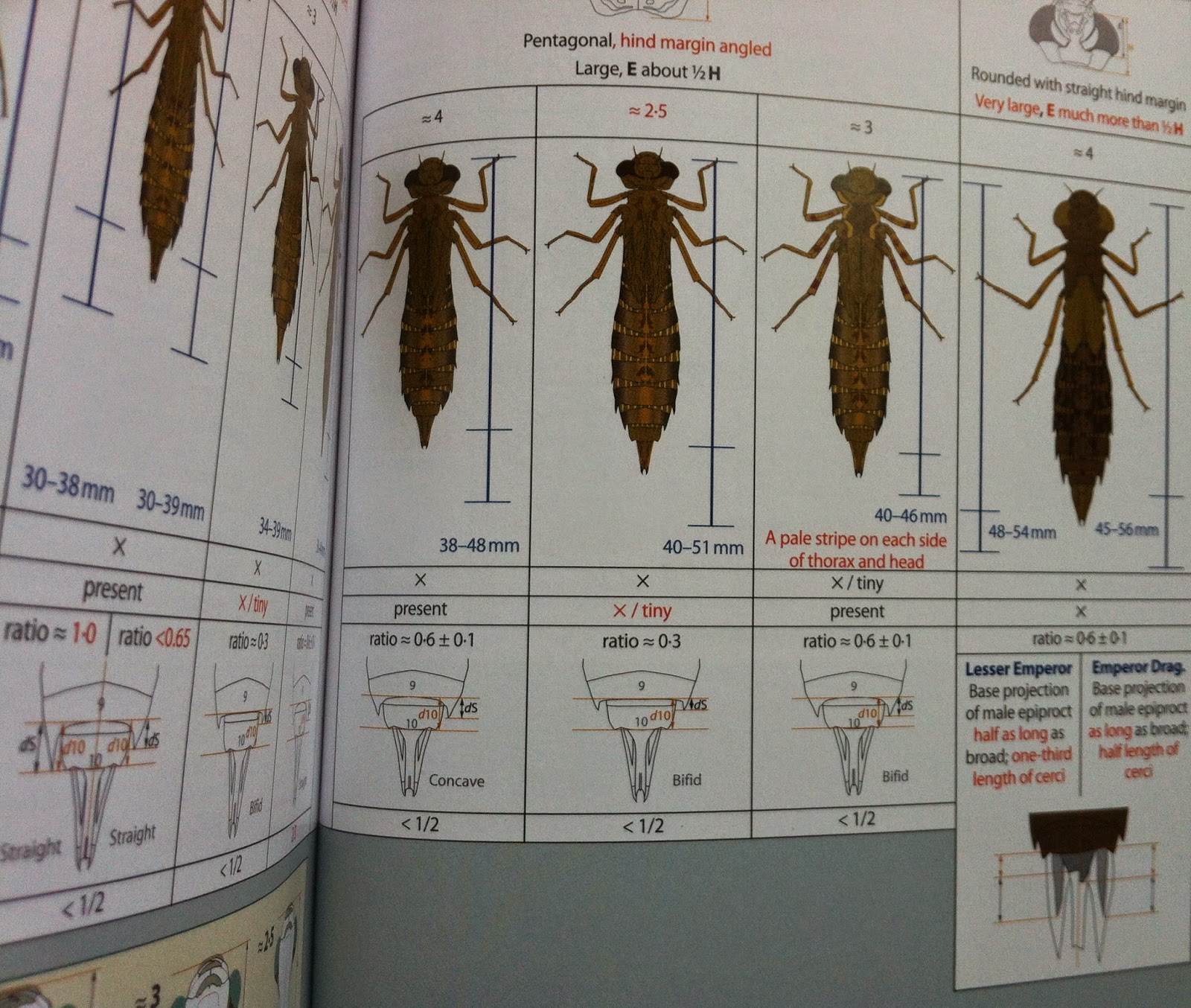 So overall, the authors probably have the luxury of not being pressed on space for this book.  Consider that the size of Britain and Ireland is only a fraction of the size of the US.  In fact, the state of Texas is more than 3x the area of Britain.  Anyway, my point is that they can afford to use more space covering new aspects of field ID.  Although I wish more of the field guides here in the US had this kind of material, I also see how enormous of a book that'd end up being.

In truth, I don't have much that's critical of this book; it's hard when I know so little about the dragonflies of Britain.  However, I really do like the layout as well as the amount of info that's packed into it.  I'd probably have skipped the clear plastic sheath that fits the book and instead just give it a thicker cover.  Then again, I hear it rains there.

I've never been to Britain but I can guarantee that when I do, I'll be using this book to ID odes.

Disclaimer:
I received a complementary copy from the publisher for review purposes,
but the viewpoint expressed in this article is entirely my own.
Posted by Cory J. Gregory at 5/08/2014 06:45:00 PM