It wasn't long ago that Ashley and I decided to drive back to the Sunshine State to try our hand at some of the long-staying rarities that have been in Florida.  After all, some warmth, beaches, and camping sounded like fun.

The drive to Florida was going to put up a fight first though!  Here, in Tennessee, we were a little leery driving into this wall cloud.  Pretty nasty looking, eh? 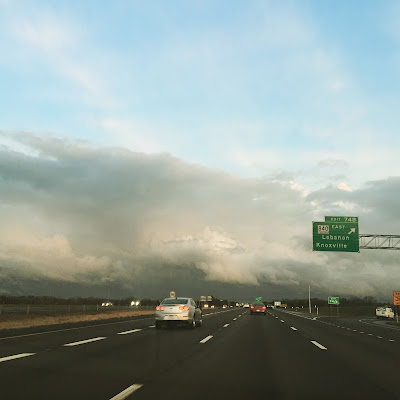 Our first birding stop in Florida was at Loxahatchee NWR.  Ashley and I have gotten to know this refuge well after missing the Smooth-billed Anis here on many occasions!  In fact, I had missed this rare denizen of tropical savannas for YEARS in south Florida.  So much so that it was #1 on my very-real "nemesis list".  With that ugly history that we shared, I wasn't sure how confident I was feeling!

We geared up and walked south from the end of Lee Road.  It was roasting out there (yes, I'm reminded of this by our sunburns that still are visible).  About 0.75 miles down the trail, we arrived at the ani spot and.... no birds.  Hmm.  We started wandering, as hopeful birders would, to see if maybe we were missing the anis somewhere?

At one point, I caught sight of a big skipper (yeah, we're going to talk about butterflies here for a second so GET USED TO IT!).  I honestly didn't know what it was but I'm no expert of Floridian butterflies.  I took some photos though including this one: 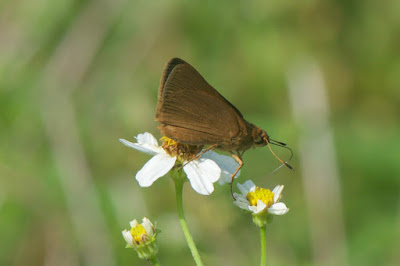 Later I was able to determine that it was indeed a lifer for me, a Palatka Skipper.  So now you know!

Anyway, Ash and I eventually decided to split up to maximize coverage.  Time passed... and my confidence was quickly slipping.  We were wandering... and my mind was wandering too.  "Hmm, I suppose we could stay around here tonight and try again later?"  Sigh.

I glanced back at Ashley and she was frantically taking photos of something and typing on her phone.  Thinking that was a bit suspicious, I started making my way back towards her.  THEN I got a text from her saying something like "RUN, I HAVE IT".  So I did... and she was right, she DID have the anis!  We watched as the pair of black, long-tailed birds slowly worked their way down the canal, giving their little high-pitched squeals along the way.  Wow!  We breathed a major sigh of relief.  We just axed our #1 nemesis!

Photos, you ask?  Ashley completely nailed the anis when she first found them: 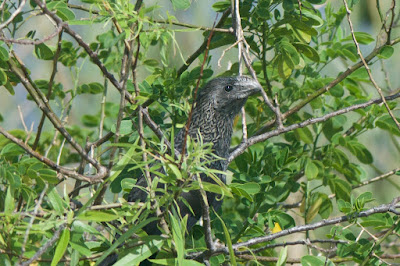 However, most of the time they were shrouded by veg: 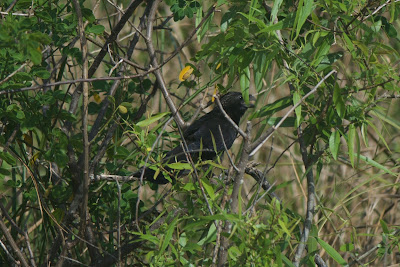 They didn't stick around long though.  They tucked into some veg behind a tree and we never saw them again in the 20 minutes we waited around.  So yeah, it was hot... we skedaddled.  The drinks sitting in the ice-cooler in the car sounded MIGHTY nice around then.

As we neared the car, I heard a crow that sounded like it was choking on corn or something.  Of course, this was the sound of a FISH CROW: 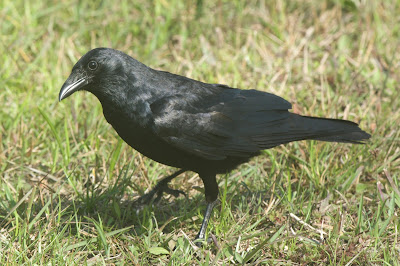 Most folks aren't aware that there are two species of crows through much of the southeast.  To be fair, the Fish Crow is very similar to American Crow but its nasal calls are a dead giveaway.

We left Lox and moved south where we camped in the Everglades that night.  As the sun was setting, we took a stroll down the then-deserted Anhinga Trail (I guess the crowds do in fact leave after dark?).  It was a special place to be considering the distant KING RAIL that called and the cattail forest that was alive and chuckling at us.  Yes indeed, multiple LEAST BITTERNS, although hidden, were giving their soft grunts to each other through the still air.  The CHUCK-WILL'S-WIDOWS were out in full force at the campground too.  Ahh, the sounds of the southeast...

The next day we were on a very distinct mission.  We left the campground at 5 am and raced down the Florida Keys.  We arrived at Long Key State Park early but as soon as the gates opened at 8:00 AM, we were in!  There were two rarities there that we were targeting:  the Code 5 Zenaida Dove that had been present for some time... and the Code 4 Black-faced Grassquit that also had been at the same park.

Unfortunately, we struck out on the grassquit straight-away (oh, we had no idea how much despair this bird would eventually put us through!).  We needed a morale boost and so we switched targets and headed for the Zenaida Dove spot instead.

The Zenaida Dove is essentially the Caribbean version of our Mourning Dove... except that it's a touch bigger, darker brown, has a shorter tail, and white trailing edges of the wings.  It's a Code 5 rarity though and has only been seen in the ABA area 9 times before.  This particular one was found on February 20 and has been seen somewhat reliably ever since.

Thankfully, it only took us a few minutes of looking before, ta-da!, right in the path in front of us was the ZENAIDA DOVE! 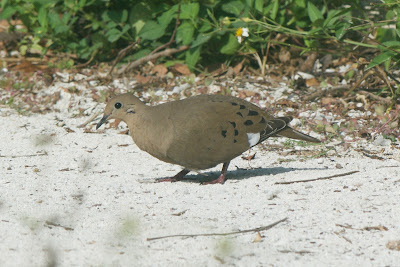 As you can see, the white patch in the wings really stood out!  (Mourning Doves don't show that fieldmark).

The bird pecked around on the path for a while doing what doves do well.  Here's a slightly blurry shot showing the sand and rocks in the air after a quick flick of its bill: 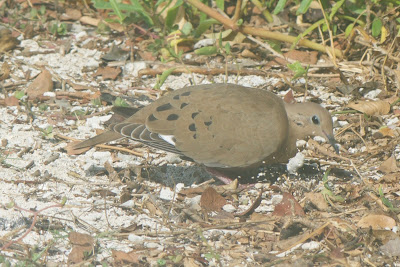 The ZEND (yes, the 4-letter code is ZEND and not ZEDO) hung out until a jogger came huffin-and-puffin down the trail.  Fairly startled, the dove picked up and started hopping down the trail towards us! 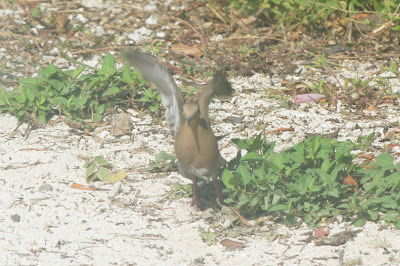 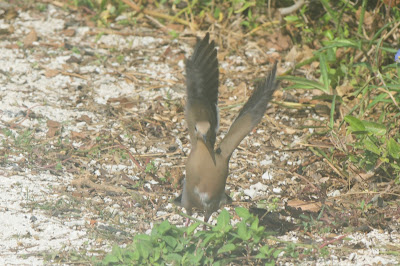 It eventually ducked off the trail and disappeared in a hurry.  But in looking at the photos I took of it coming head-on, it looks like the bird has a brood patch.  Take a look: 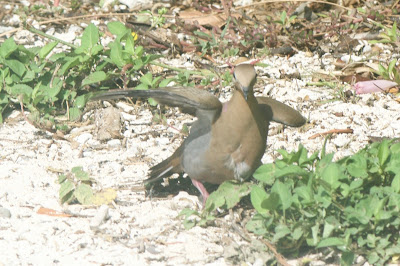 This is fairly interesting considering people have already seen Mourning Dove mate with it (whoops, wrong species!).  Perhaps it's on eggs some of the time?  Interesting scenario.

So with the rarest of our Florida targets seen well, we departed the ZEND zen spot and headed back.  We paused for this BLACK-AND-WHITE WARBLER that was more focused on snacking than skulking: 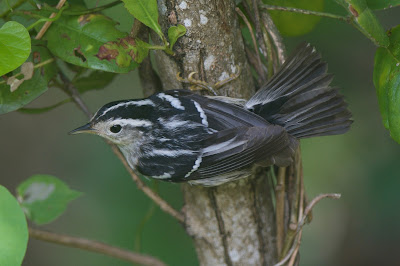 So we returned to the campground to look for the dreaded grassquit.  Another couple of hours but still no luck.  :-(  Thankfully, we snagged one of the non-reservable campsites and set up camp.  Yes, we were here for the long haul... or so we thought.  We fell asleep to the sea breeze drifting through our tent.  We had just spent 9 hours looking for the grassquit that day; would we have better luck tomorrow?  Turns out, no... but there's a wrinkle in the story.  Stay tuned!
Posted by Cory J. Gregory at 4/04/2016 09:09:00 PM