By this point on our trip we were quite thankful that we had at least found the anis at Lox and the continuing Zenaida Dove.  It was looking like we might miss our other targets which, as we all know, sometimes happens when you bird.  It just does.

Our last day at Long Key State Park started like the previous one.  We rolled out of the tent, stood up, and were greeted by this sunrise: 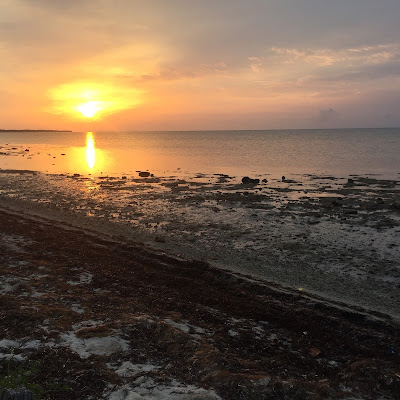 We begrudgingly started birding the row of campsites yet again, our third morning in a row.  Because we were actual campers there, we were allowed to walk around inside the park before 8:00 which is when the park opens to the public.  However, 8:00 AM came and went and we saw no sign of any other birders.  No matter, no matter, we continued to wander the campground and made plans for packing up and leaving.

But then... I heard a call note.  We tracked it down annnnnd..... waterthrush, of course.  Stupid birds.  For the past 2-3 days we had been reacting to every little chip, tssp, and lisssp hoping that it was the grassquit.  At this point we had become rather desensitized; I mean, we even heard cardinals doing weird call notes that we had never heard before.  Depressing.

We found a little pocket of avian activity down around campsite 8 and 9 and we both went on alert when we saw a differently-shaped bird pop up.  Was THIS the grassquit?  No, not even close: 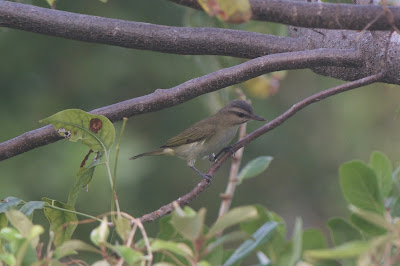 This gray-capped, greenish guy was sporting nice black malars... it was a BLACK-WHISKERED VIREO.  Although they breed in the mangroves of the keys and south Florida every summer, this was a species we had seen only twice before (the reason for that, very simply, is that we rarely visit Florida during the summer months).  So we enjoyed that sighting quite a lot!

We also bumped into this COMMON GROUND-DOVE in the area.  Not really rare but it was the first one we had seen at the campground: 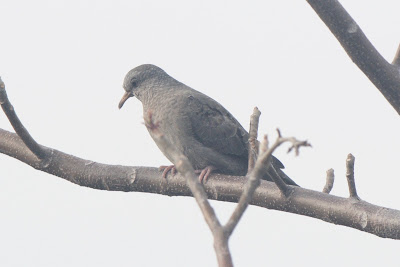 A few campsites down the row I heard another call note.  Again, I REALLY thought it sounded good but judging from our past experience, it probably wasn't the grassquit.  But up popped a bird back in the veg.  Even naked eye, we knew exactly what it was... it WAS the BLACK-FACED GRASSQUIT!  In some crazy way, we had just stumbled into this tiny, drab rarity that we had completely given up on.  Ash reminded me pretty quickly "TAKE A PHOTO".  I did.  It isn't great but it's all the proof we needed to be on cloud nine: 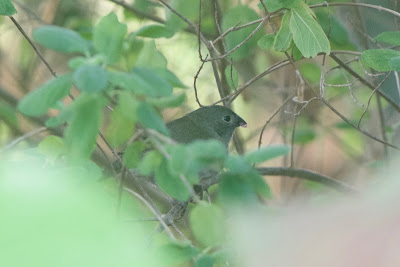 The bird didn't put on a great show, to be honest; it never came out into the open and it was in view for maybe 15 seconds in total.  But still, you would find NO complaining from us!

This female grassquit belongs in the West Indies.  Although they're quite rare in the ABA area and is considered a Code 4 rarity, there have been 3 ABA records in the last 4 years.  Together, with the Yellow-faced Grassquit Ashley and I snagged in Texas 5 years ago, I suppose we have the ABA grassquit sweep now?

Anyway, with that Hail Mary snag of the grassquit, our work in the keys was definitely done and we went back to the campsite to pack up.  Before we could make much progress, I heard a WHIMBREL calling from somewhere.  Ash, who had the camera, managed to snag a photo of it as it passed by.  I love me some curlews! 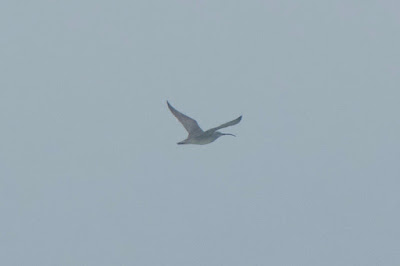 The anoles were everywhere.  Look on any stump or post and you'd probably find one or two.  I truly had never seen so many!  Here's one fanning its red/orange dewlap from the post in our campsite: 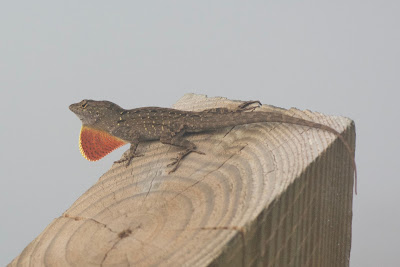 Last but not least, we were packing up when this young YELLOW-CROWNED NIGHT-HERON decided to, oh, you know, walk down the beach right next to us!  Silly thing.  Night-herons are often a bit more secretive than this: 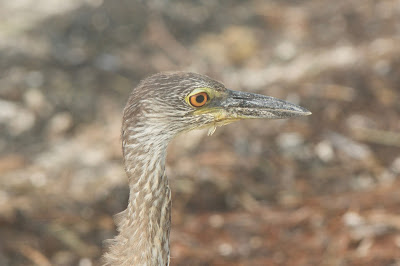 Now that we had left the campground, we were officially homeless for the night.  What to do?  Where to go?  Thankfully, those questions had been answered by what we saw on our phones... the eBird rarity email had come through and there was a report of a Code 3 AMERICAN FLAMINGO at a state park south of Fort Myers.  Really?!  We had given up on this target because the reports of this bird had really dried up.  But hey, we were only 3-4 hours from this potential ABA bird... so we headed that way.

Fast forward several hours (and incidental county ticks!), we pulled into Lovers Key State Park to find it inundated with hundreds of beach-goers.  Ugg!  Surely there would be no flamingo on the beach with all those humans scampering about, right?

We walked out to the beach where it was said to be hanging out and saw, naked-eye, a scope and tripod set up on the beach (turns out that would be Casey.  Hi Casey!).  Behind the tripod though?  It appeared that there was an enormous pink bird standing on the sand beach near the gull/tern flock!  No way.  It WAS the AMERICAN FLAMINGO!  We hurried that way and Casey mentioned in passing there was no need for the scope we were hauling.  She was right... this flamingo has grown so accustomed to people passing by (and snapping selfies with it) that it allowed pretty close approach: 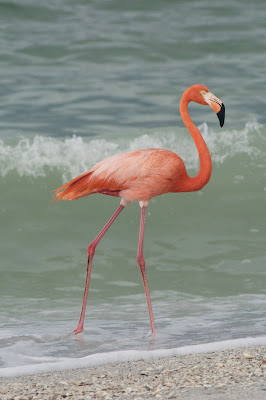 Crop in a little bit on photos and you're looking face-to-face with a very impressive bird! 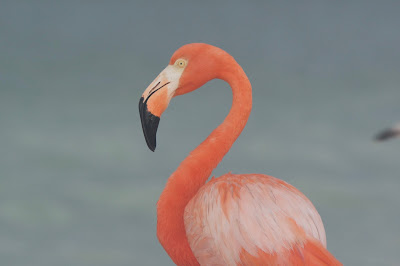 This American Flamingo has been floating around the Fort Myers area for some time now, spanning into previous years even.  Although many flamingos seen in Florida are pets or released birds, it's thought that this bird, like many that wander south Florida, is wild.

If you stepped back and took a photo of the tern/gull flock, pay attention to the shoreline behind them: 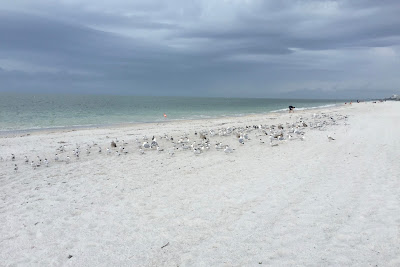 Another thing you might notice with that photo is the incoming storm.  The rumbles of thunder made me curious enough to check the doppler on my phone and... holy crap, some massive t-storms were headed right for us!  That kinda put us in hyper drive.  Instead of gawking at the flamingo for another hour, we had to get moving.  Cloud-to-ground lightning wasn't far off... and here I am on the beach with a 6 foot metal Bogen tripod on my shoulder!

I quickly snapped a few pictures of some birds nearby.  First up, a ROYAL TERN sporting the "balding" look of its nonbreeding plumage: 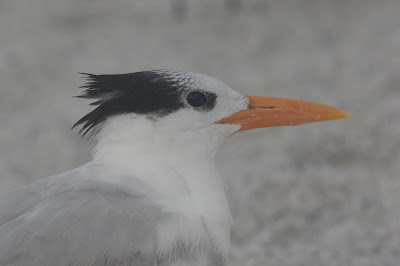 Some of the ROYTs had more black coming in though.  See the difference? 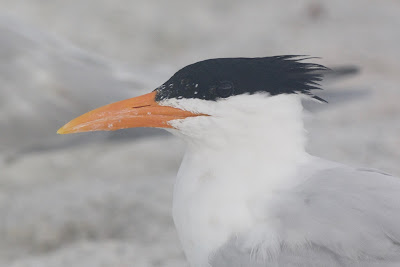 A couple of smaller terns were also loafing there, sandwiched between others... the sharply-marked SANDWICH TERN: 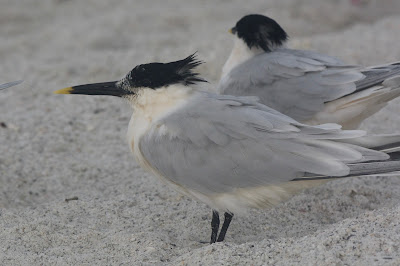 Mixed in with the tern flock were a few shorebirds as well.  Given the conditions and the rush I was in, I was happy with how this WILLET shot turned out: 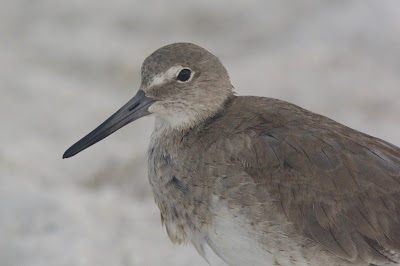 After that though, we started a beeline back towards the parking area.

... but then heard a soft note of a plover somewhere.  Ash spotted them, a pair of WILSON'S PLOVERS running, stopping, running, stopping.... typical plover behavior.  She snapped a nice photo of one of them: 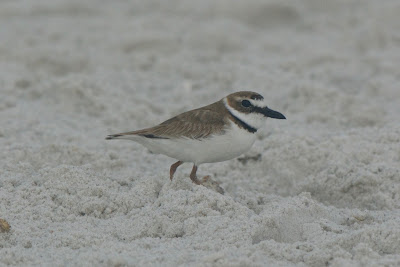 But after that, we really did boogie out of there.  Thankfully we made it to the car before most of the rain hit.  We sat there, relieved.  We were both surprised and pleased that somehow, against all odds, we came to Florida and nailed 4 out of 4 targets.  It was a good reminder that we don't miss EVERY rarity that we chase (remember earlier this winter when we missed everything?).

Our time in south Florida was at an end.  We ventured up to an area north of Orlando to hang out with my grandparents for a few days.  Just out back of their place, however, we spied this little gator sunning itself: 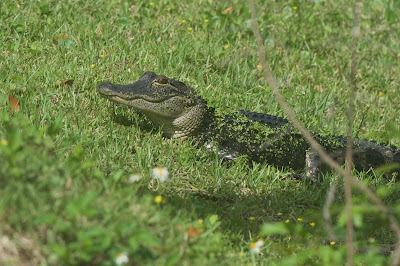 I looked around for big momma but we didn't see any others.  We decided we wouldn't jump into the canal (actually, that was never on the docket anyway, we're not idiots).

We took advantage of the nice weather though and visited a nearby eBird hotspot in Lake County.  A park in Mt. Dora (near Gilbert Park) had a nice boardwalk next to a lake and so we took a stroll.  At one point we spied this Southern Black Racer: 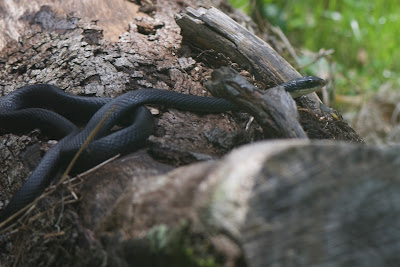 The dragonflies were pretty active too.  This PRINCE BASKETTAIL was notable for me only because it was the first time I had photographed one actually perched: 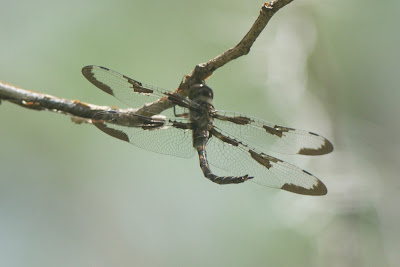 Of course the birds were interesting too.  For example, this PILEATED WOODPECKER was foraging above our heads so closely, it must have been the closest I've ever been to a Pileated: 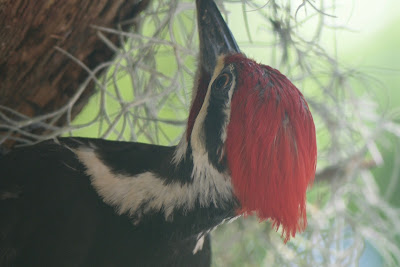 It was going to town on some rotting wood right above us which would then rain down on us.  I held up my hands and managed to catch a few chunks of wood personally removed by this giant woodpecker.

I also managed to get a nice shot of some feathers from a nearby bird... but can you name the species? 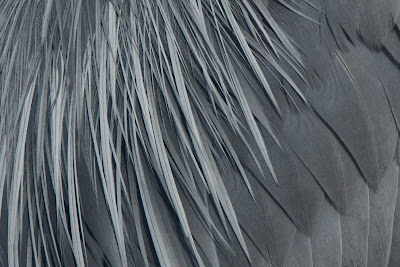 It belongs to our most familiar heron, the GREAT BLUE HERON.  I took this next photo of the same bird while it was preening and despite the horrid look with its eye, I promise it's not dying!  I suppose it's just enjoying some sun and scratches? 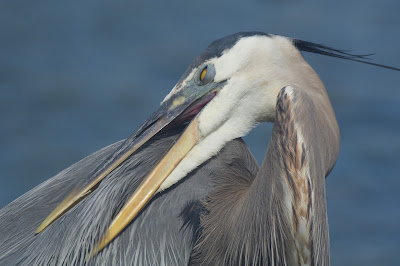 Anyway, we ended with 30-40 species for our 90 minute walk (checklist can be seen here).

But then it really was time to say goodbye to the Sunshine State altogether.  With our sand-filled tent packed in the trunk, a laptop loaded with photos of new and exciting birds, and sunburns on our feet... we drove north.  When will be back?  It's hard to say.  For now, though, adios.
Posted by Cory J. Gregory at 4/09/2016 11:16:00 AM