We recently up and moved out of California.  We're headed to St. Paul Island in the Bering Sea in a few weeks but wanted to drive east first.  This post, in essence, is 2000+ miles of driving boiled down to a couple of photos.

Our first real target was HIMALAYAN SNOWCOCK which is only found in the Ruby Mountains of Nevada.  I had only seen this species once before (and that was in August or something) so we didn't really know what we were doing.  There are surprisingly-few April eBird records of this year-round resident but we ventured up anyway.  The scenery is still spectacular in April: 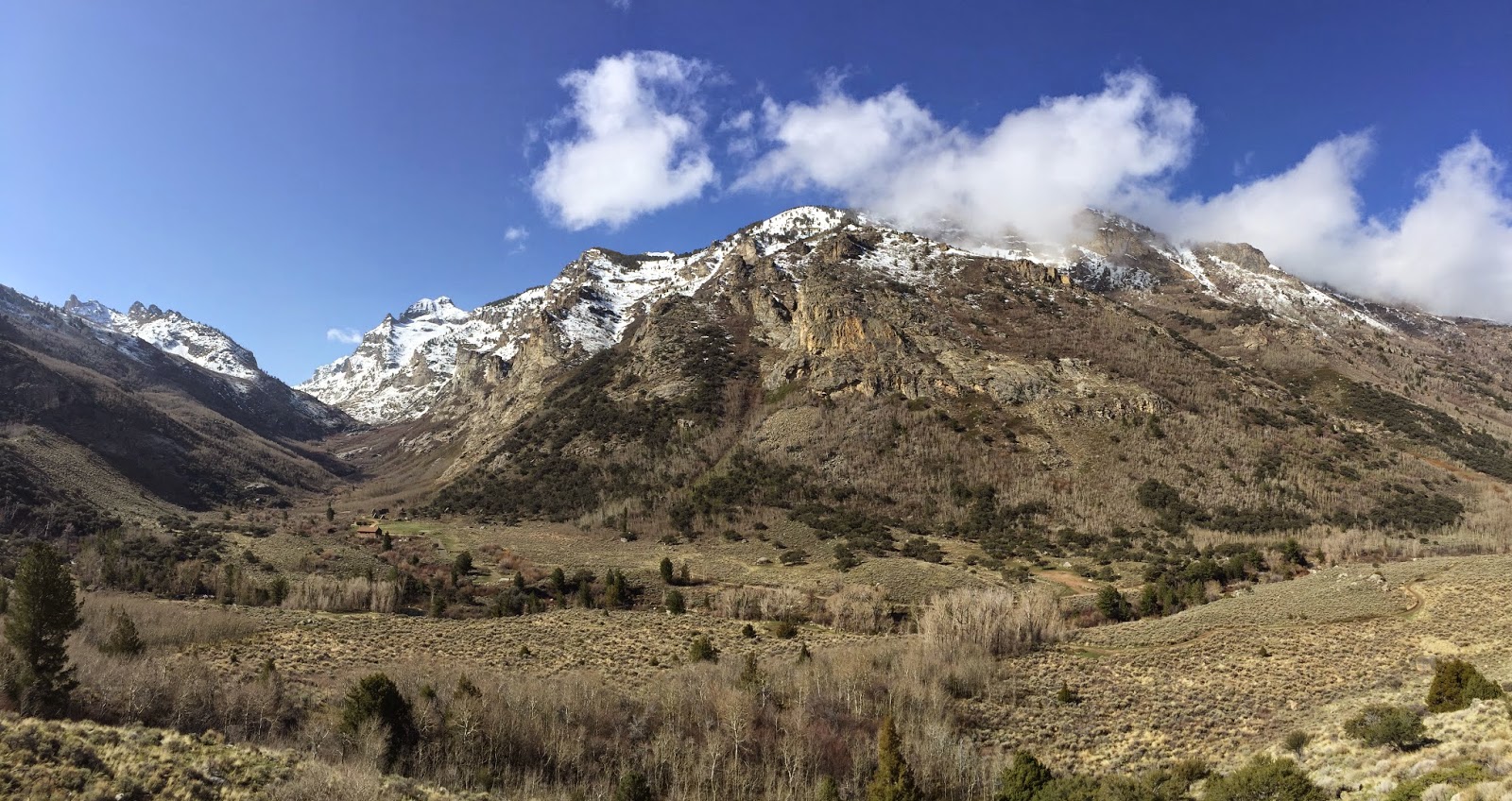 Another thing that became evident was that Ashley was having a good day spotting things!  Look at the above photo and imagine a lone chicken sitting on one of those mountain tops.   Then look below at what Ashley spotted while scoping for snowcocks from that very spot: 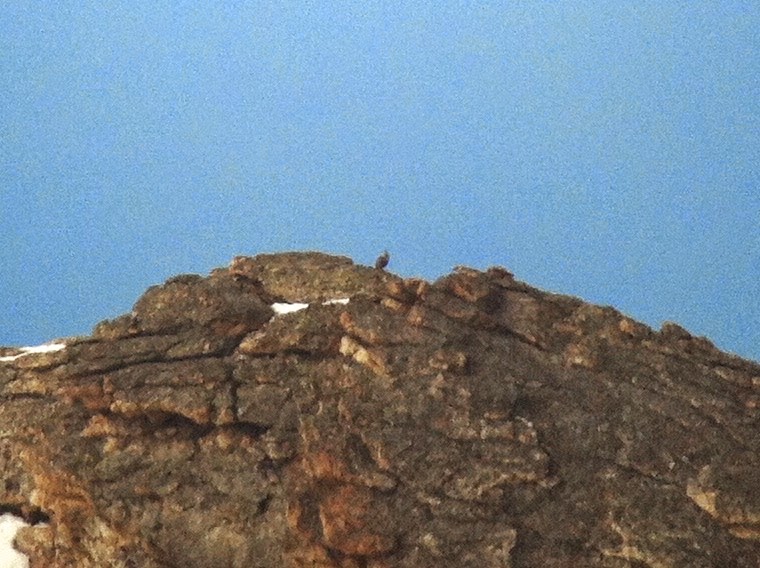 Yes indeed, she found her lifer snowcock from like a mile or two away!  It was also fun to hear this species calling repeatedly (which we were able to do from the Glacier Overlook).

We poked around a few other spots in Lamoille Canyon and enjoyed things like SAGE THRASHERS, BREWER'S SPARROWS, BLACK ROSY-FINCHES, CANYON WRENS, and this adult GREAT HORNED OWL sitting guard over one of its youngsters (evidenced here by a ball of down): Driving farther down the canyon, Ash suddenly told me to back up.  I did.  She had spotted two CHUKARS.  Like the snowcocks, this is an introduced species to North America.  However, it's been established in rocky habitats of the West for some time.  Here's one of the two that Ashley spotted: 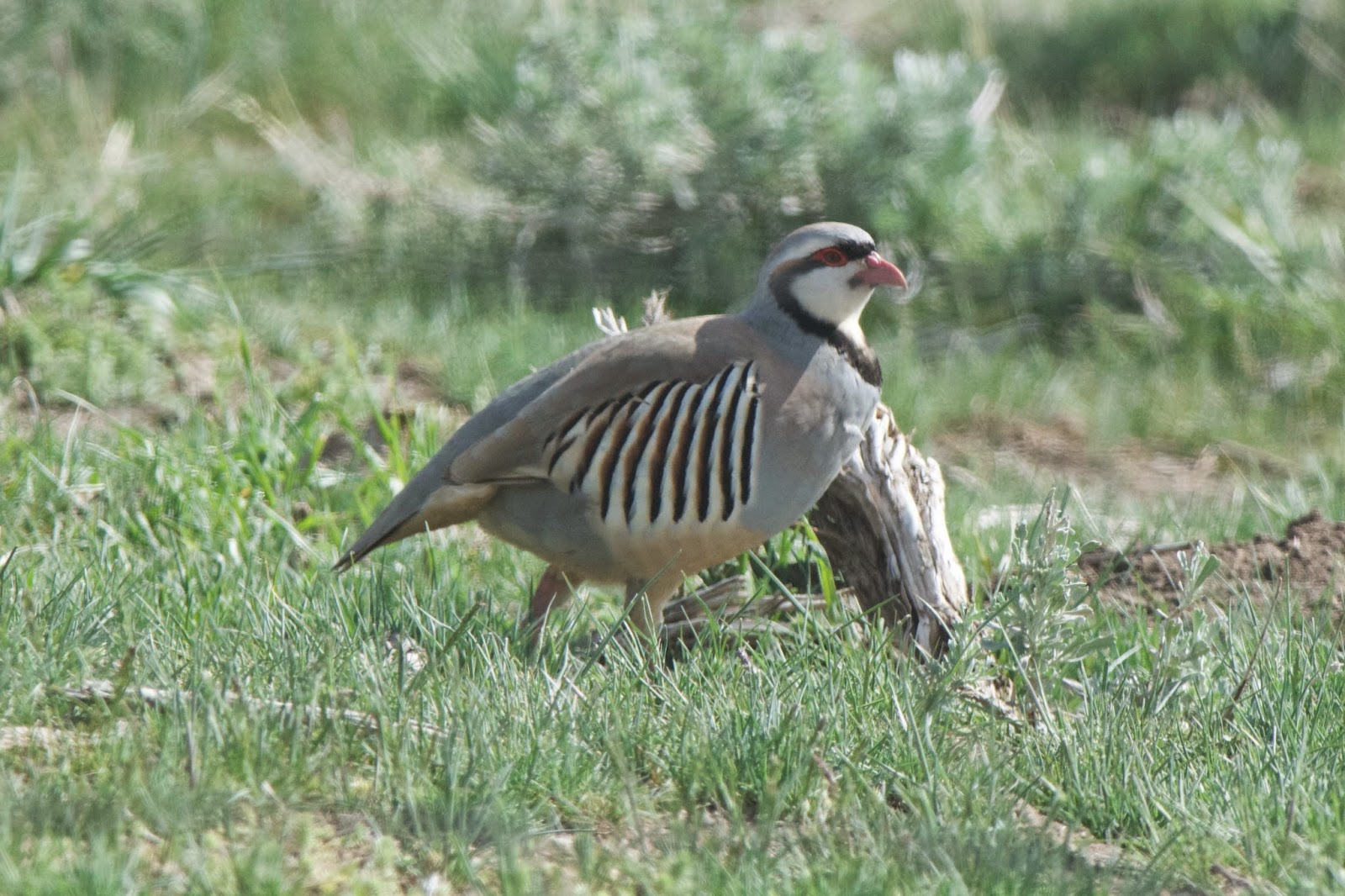 Fast forward a day or two to when we drove through Colorado.  We took a slight detour (in lat/long as well as elevation) and stopped by Loveland Pass.  The goal was simple; we wanted ptarmigan.  The first thing to greet us though was some premier scenery (as one would expect at 12,000 feet in Colorado): 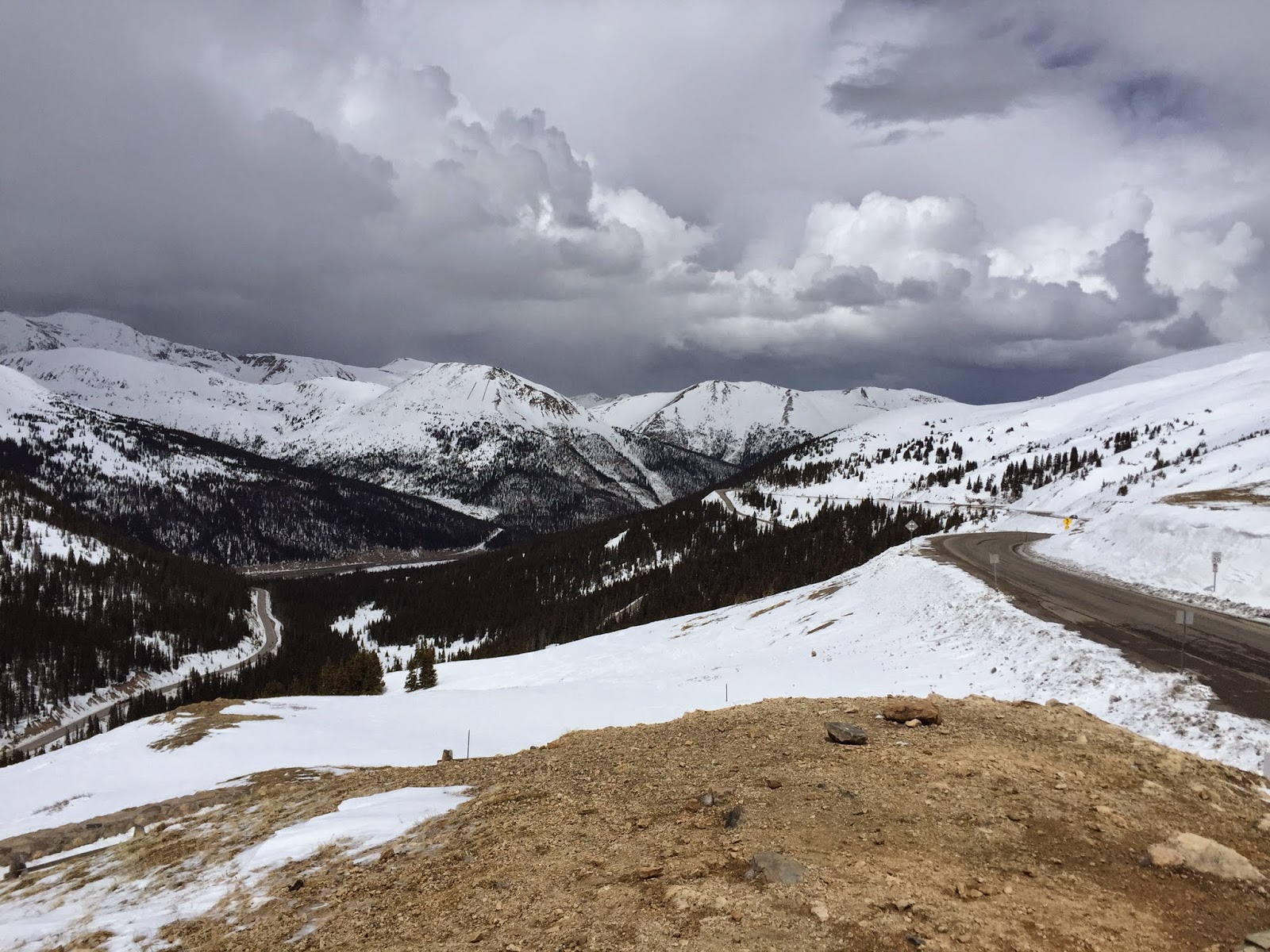 It didn't take long before Ashley continued her sharp-eyes exhibit and spotted a distant WHITE-TAILED PTARMIGAN foraging next to some skiers.  We investigated further.  It's a mostly white bird in a mostly white landscape but when you see it properly, it's a really freaking cool species: 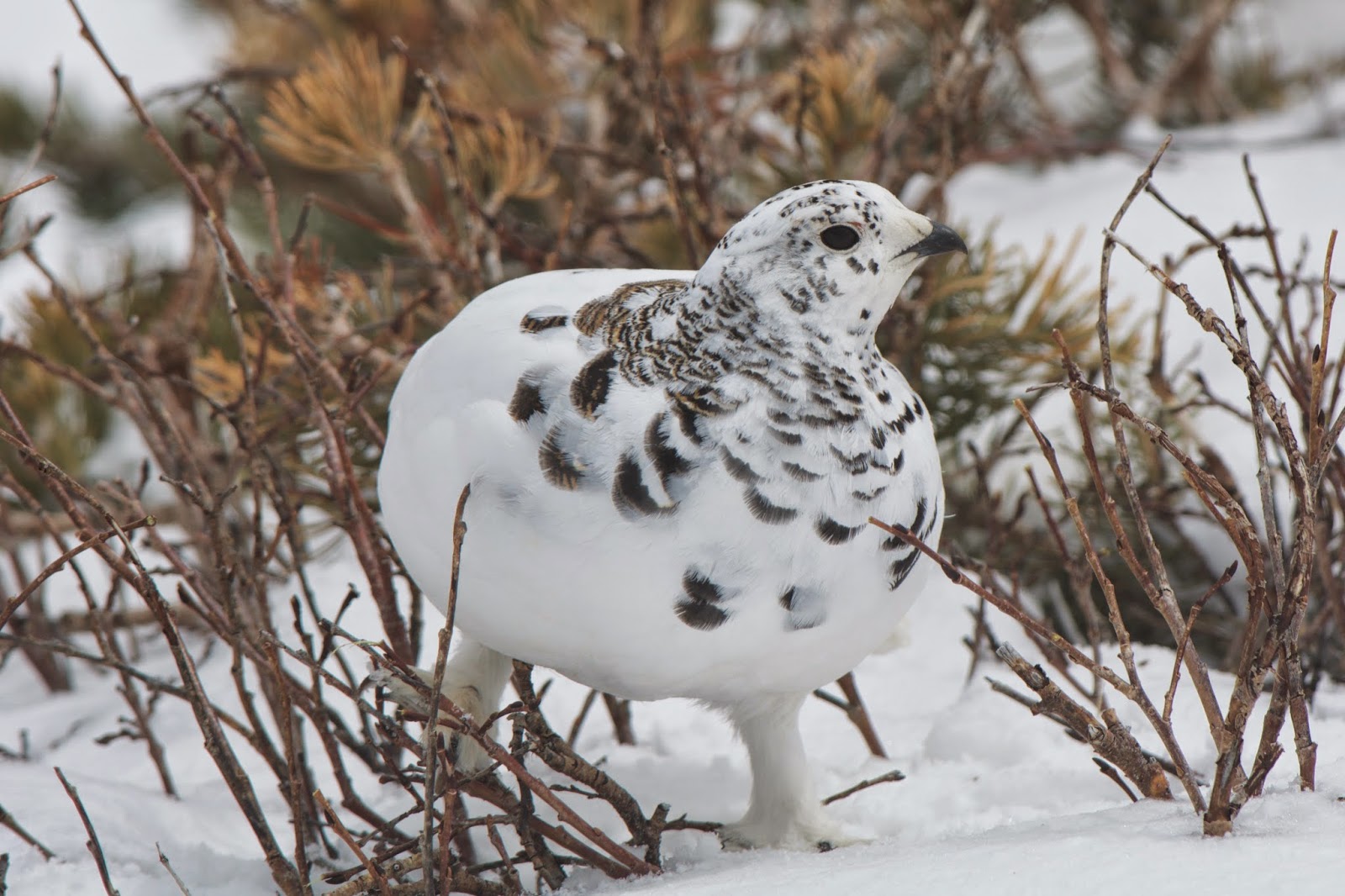 This bird was pretty clearly habituated to people; it actually approached us and got within ~10 feet! 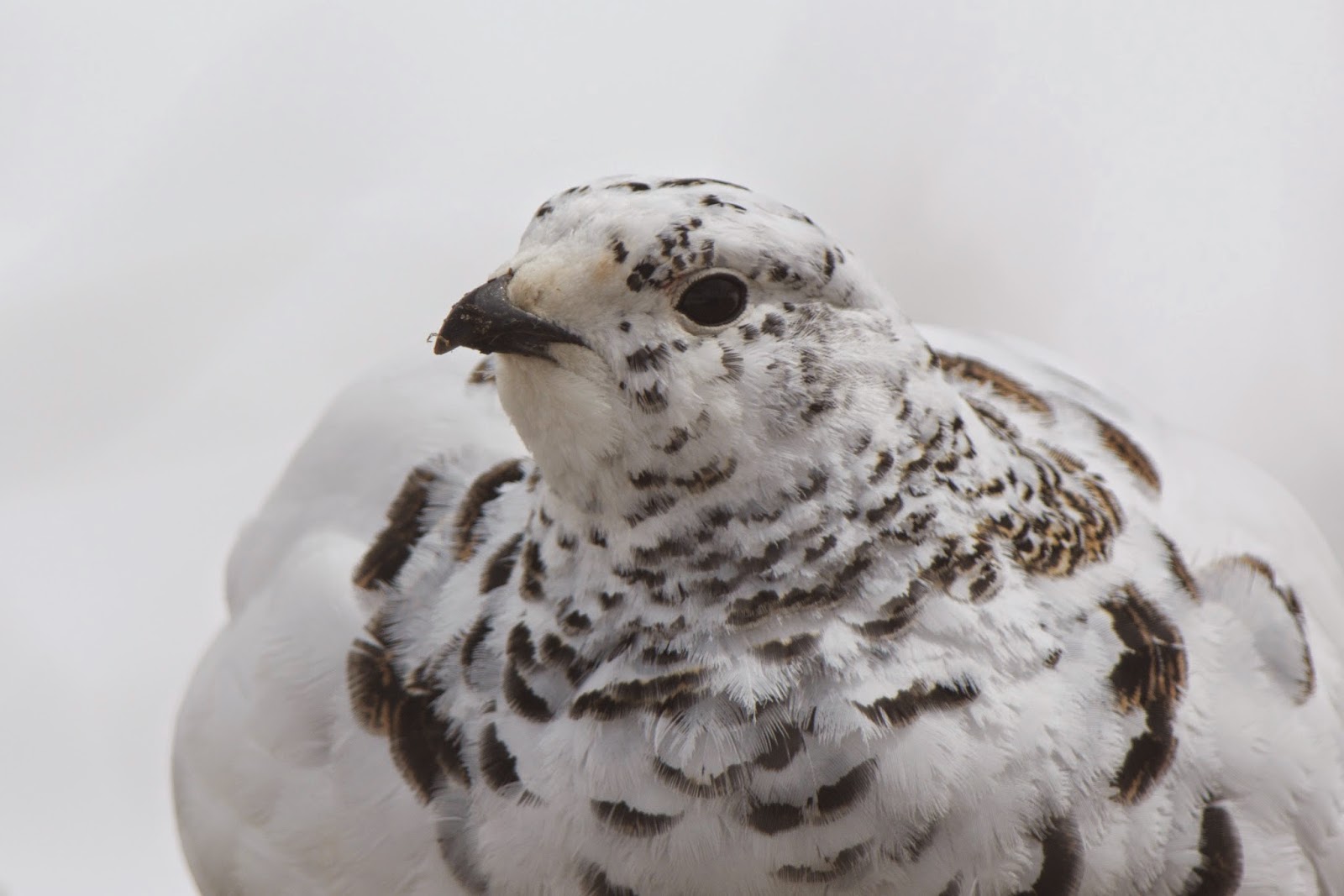 If you haven't looked at the fully-feathered feet of ptarmigan before, here's your chance.  This adaptation is perfect for their high-altitude haunts: 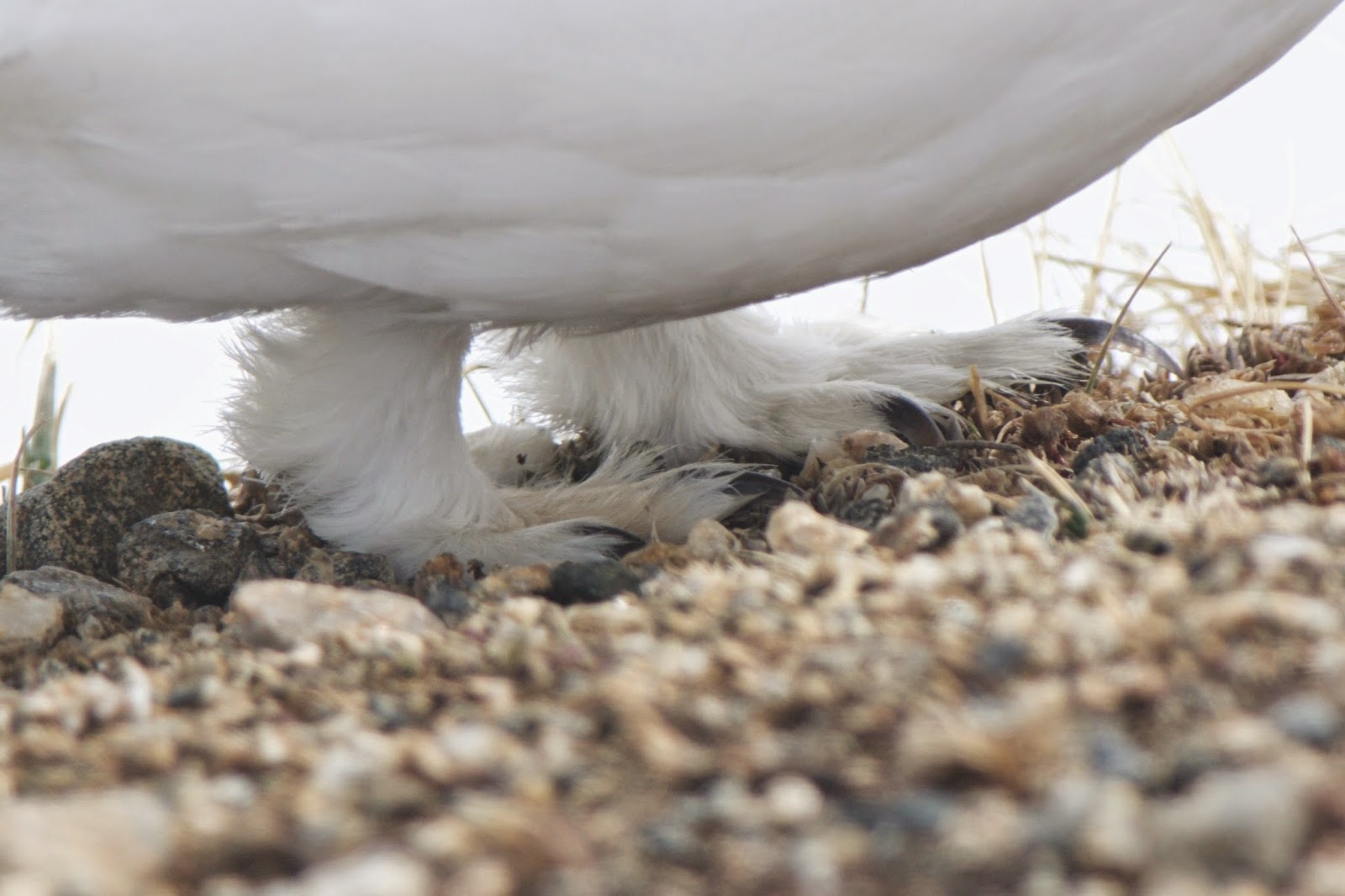 We were in the Salina area of Kansas one night and decided to give a nearby eBird hotspot a try.  For being only a few miles from where we were staying, we were happy to surround ourselves with some eastern species again.  We visited it on a windy afternoon (checklist here) but we were glad we did; we saw things like UPLAND SANDPIPER and a nice variety of other shorbs.  We had enough fun that we returned the next morning (checklist here) and saw some species we missed the evening before.  We left Saline County with a new county list of 58.

One of our last stops was in eastern Kansas.  To be more exact, we briefly spun through Manhattan where both Ashley and I lived.  It was fantastic to see the Flint Hills once again (although it was a cold and blustery day):

Rest assured, by the time we arrived at our destination in NE Missouri, I had accrued a long list of new counties!  I'm sure I'll post my updated county map at some point.
Posted by Cory J. Gregory at 4/28/2015 09:16:00 PM