This is going to get hairy

The story begins yesterday morning.  I ventured north into town before the morning rush hour reared its ugly head and I arrived at the Young Wo access to Lake Natoma around 7:30.  My goal for this outing was pretty simple: I wanted to see one of the HAIRY WOODPECKERS that had been reported recently.

I should add some context about the target species.  Mainly, HAWOs are actually super rare here in Sacramento County.  So if you grew up in a part of the country, like I did, where all you had to do was to locate your nearest suet block to see them dripping off, you first have to wrap your head around that aspect.  How rare are they?  In eBird, they've only been seen in this county 3x in 2013, 1x in 2014, and then this February.

So, shortly after arriving on the shores of Lake Natoma, I heard geese overhead and when I saw them, I grabbed my camera.  They were indeed "Aleutian" CACKLING GEESE.  No biggie, right?  Well, if you check eBird, you'll notice they're actually quite rare along the American River.  I certainly had never seen them there and I'm not sure anyone has ever had them where I was.  Anyway, so I took a photo because I figured they were uncommon enough (and yeah, I think getting proof of EVERY uncommon bird you report is really important).  You can see the white collars on the necks: 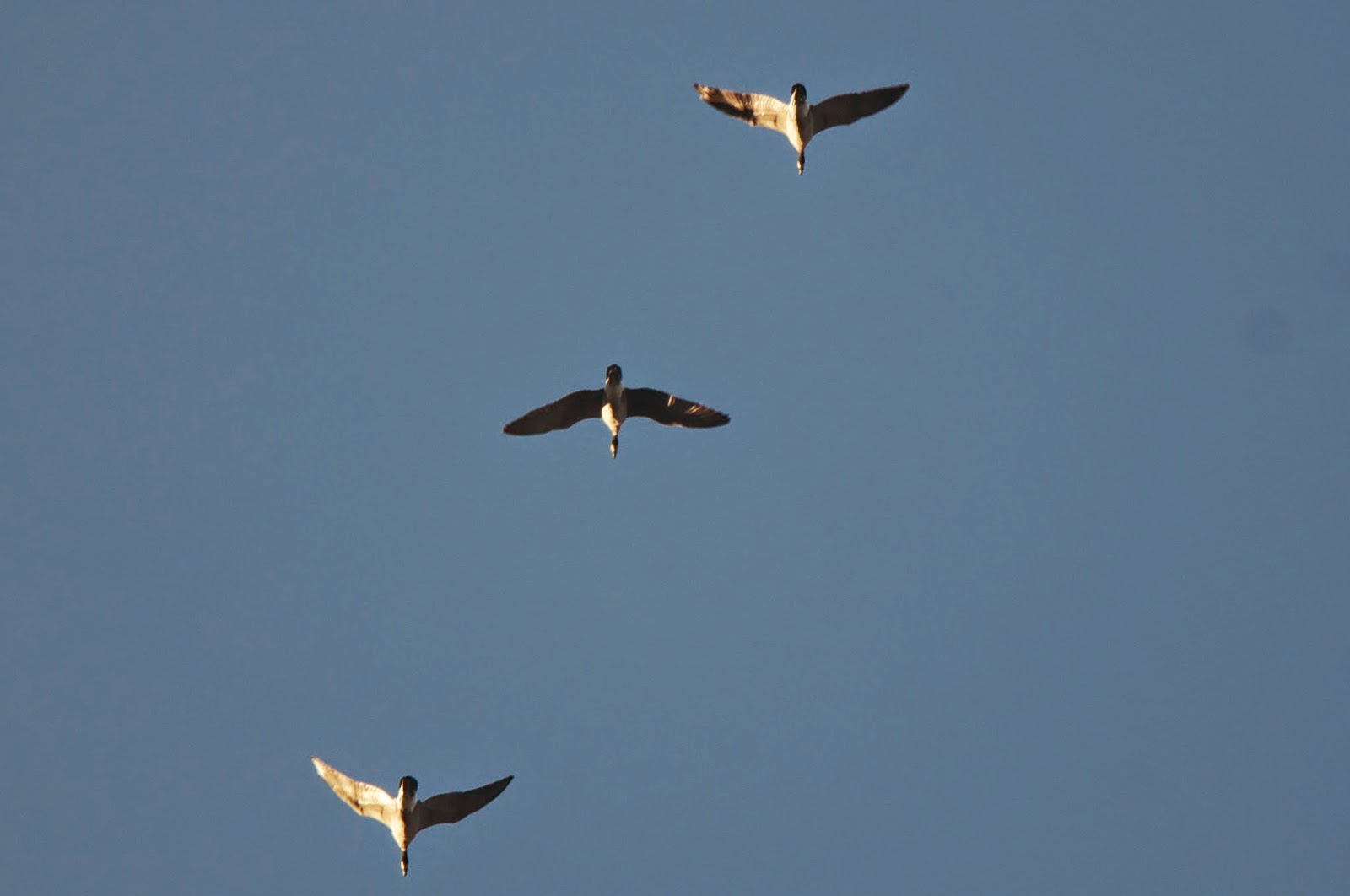 After turning left on the bike path, it wasn't far down that I heard a male HAIRY WOODPECKER in the forest of Gray Pines to my left.  I got a quick glimpse but it was too distant for photos.  Then it vanished.  Mildly bothered by this, I decided I'd return and put more effort into this bird in a few minutes.  I wanted to continue down to the power pole with "26" on it, written in yellow stickers, because that's where folks had been seeing a female HAIRY lately.  Before I even got there, I heard a bright and jumbled song coming from an open, rocky area to the left.  It sang again.  Shoot, it sounded familiar, like a really fast House Wren.  Then it clicked... it was a RUFOUS-CROWNED SPARROW.  I tracked it down and watched two RCSPs forage in front of me at close range: 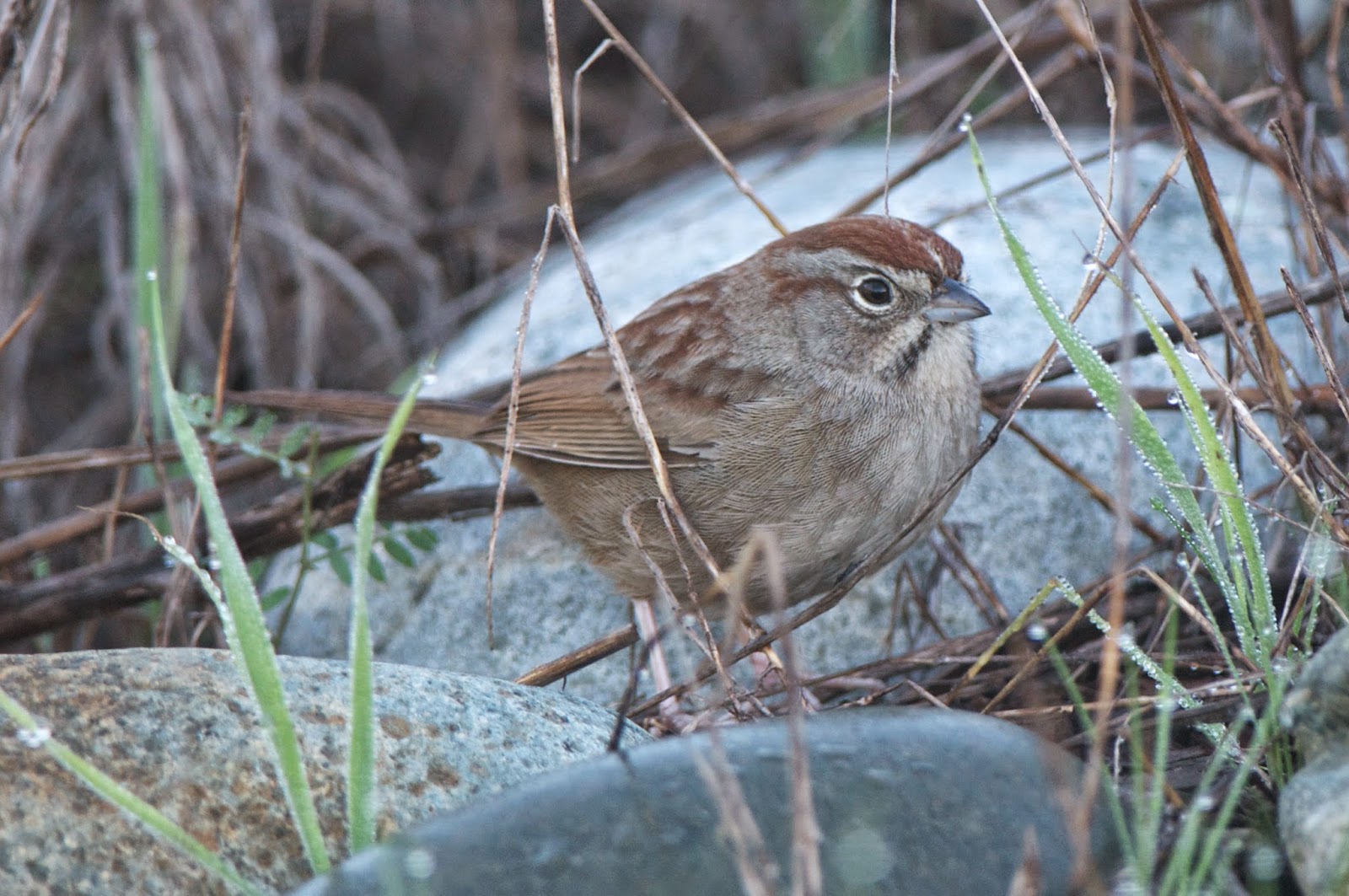 After leaving the sparrows in peace, I continued on.  Problem is, I really couldn't find any HAWOs near #26.  Oh well.  I gave it about an hour of poking around before I decided I'd head back to where I had the male.  But first, my path crossed with a big ol' herd of turkeys.  Maybe "herd" isn't technically correct but they rummaged around and looked at me so blankly that I thought "herd" was fair.  One particular male was going bonkers and displaying to anything that moved: 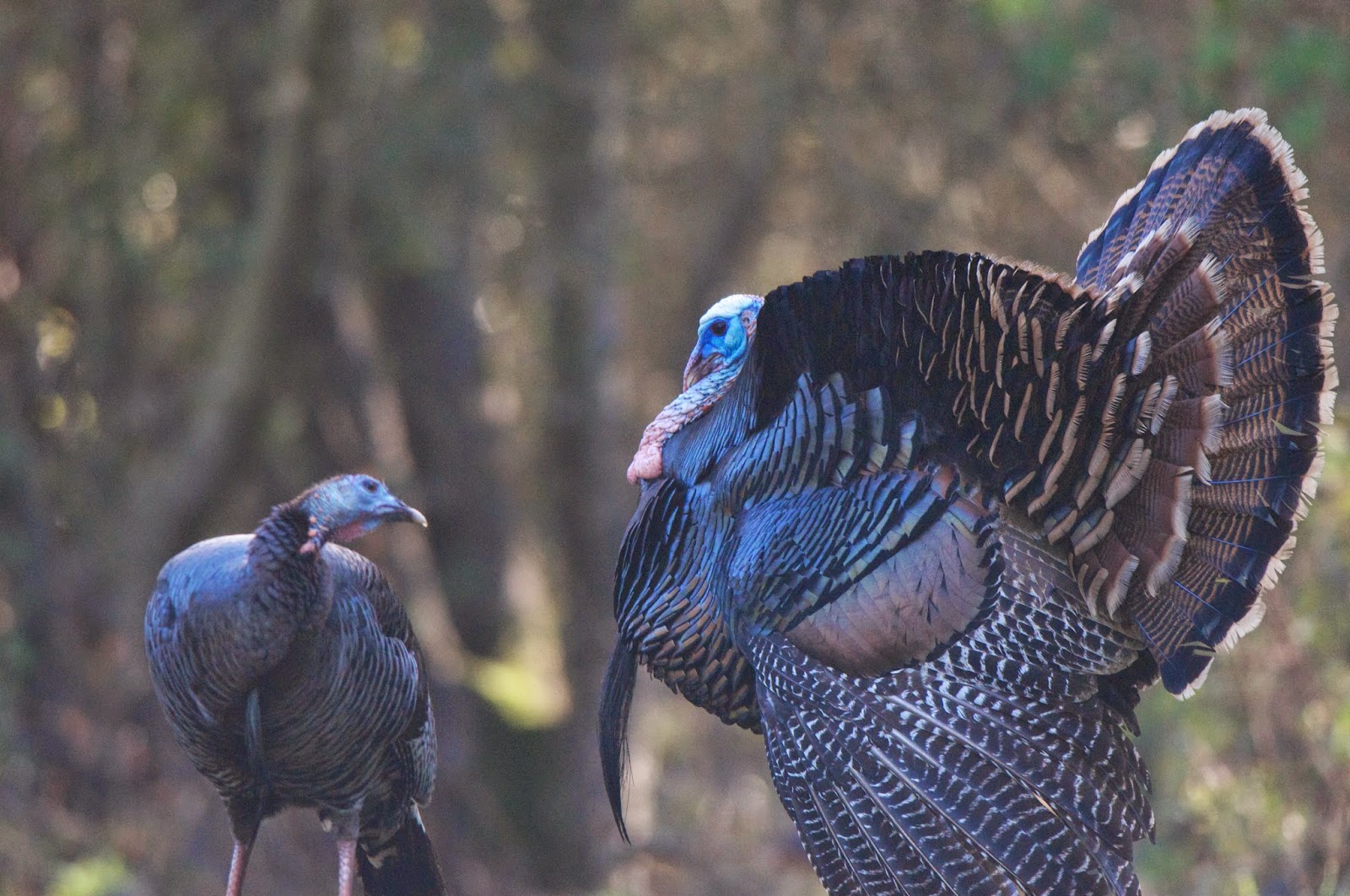 But seriously, look at this thing: 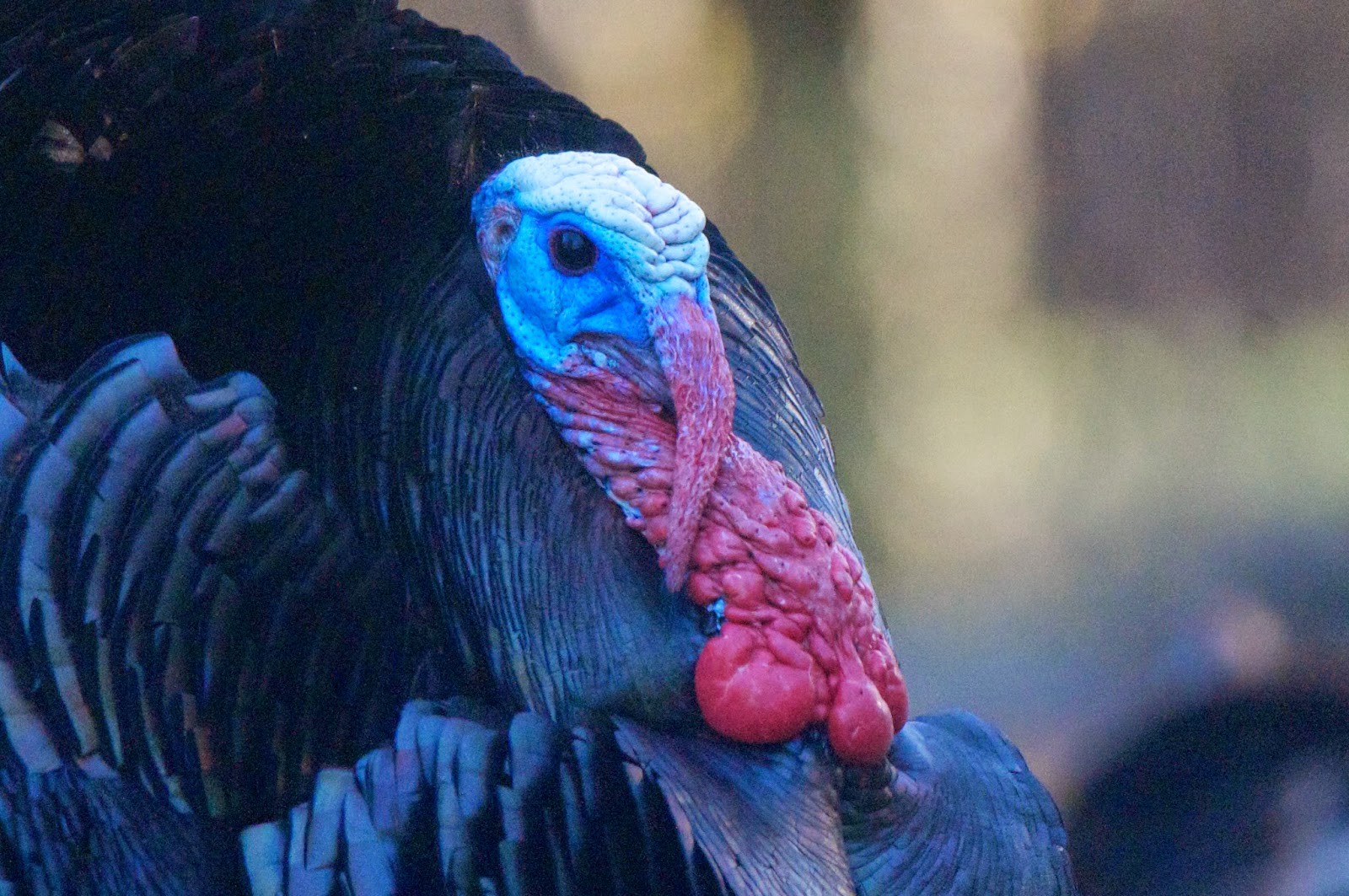 I'm kinda disgusted too.  I might have to put this cherry poptart down for a few minutes.

I returned to the Gray Pine forest (near power pole #31) and slowly meandered in and around the big rock piles back in the trees.  At one point I jumped, a big white bird of prey was flying through the woods.  I had just accidentally scared a BARN OWL out of its daytime roosting spot (sorry buddy... but you WERE a year bird).  Anyway, the male HAIRY WOODPECKER was super active again and calling frequently.  I honed in and found him working one of the pines; here's proof: 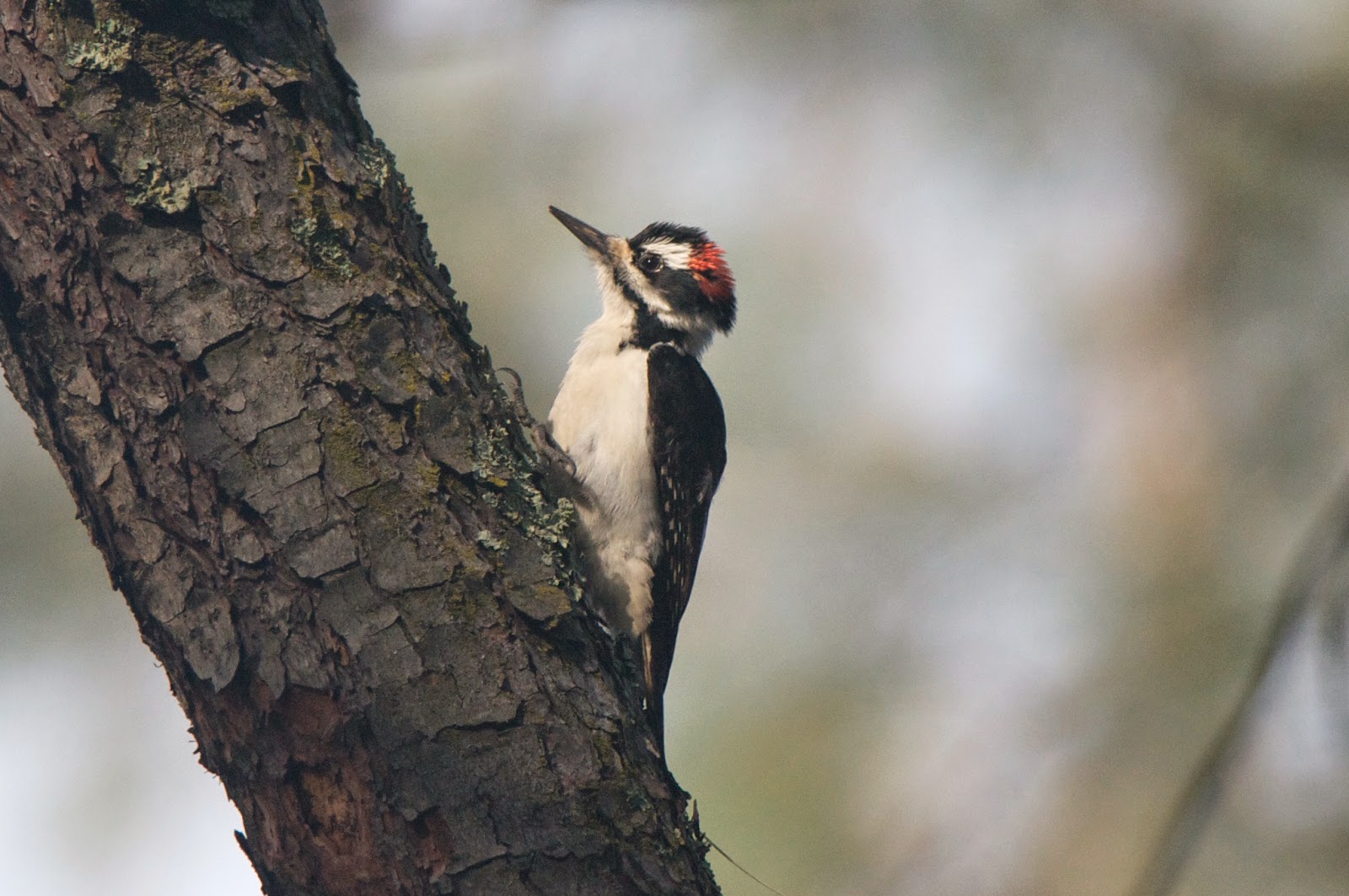 It was neat being able to watch such a rare species for Sacramento County for so long.  While I was standing there though, some odd screeches filtered through the woods.  I turned to see a STELLER'S JAY zoom by and land to my right.  Super rare in Sacramento County during MOST winters, it's been fun seeing them this winter after many invaded farther downhill than normal and into Sacramento.  I had to do a double-take though when I saw 4 more flying by!  Five STJAs at once?  This was way more than I had seen in the county (and it turns out five tied the county high-count for this species): 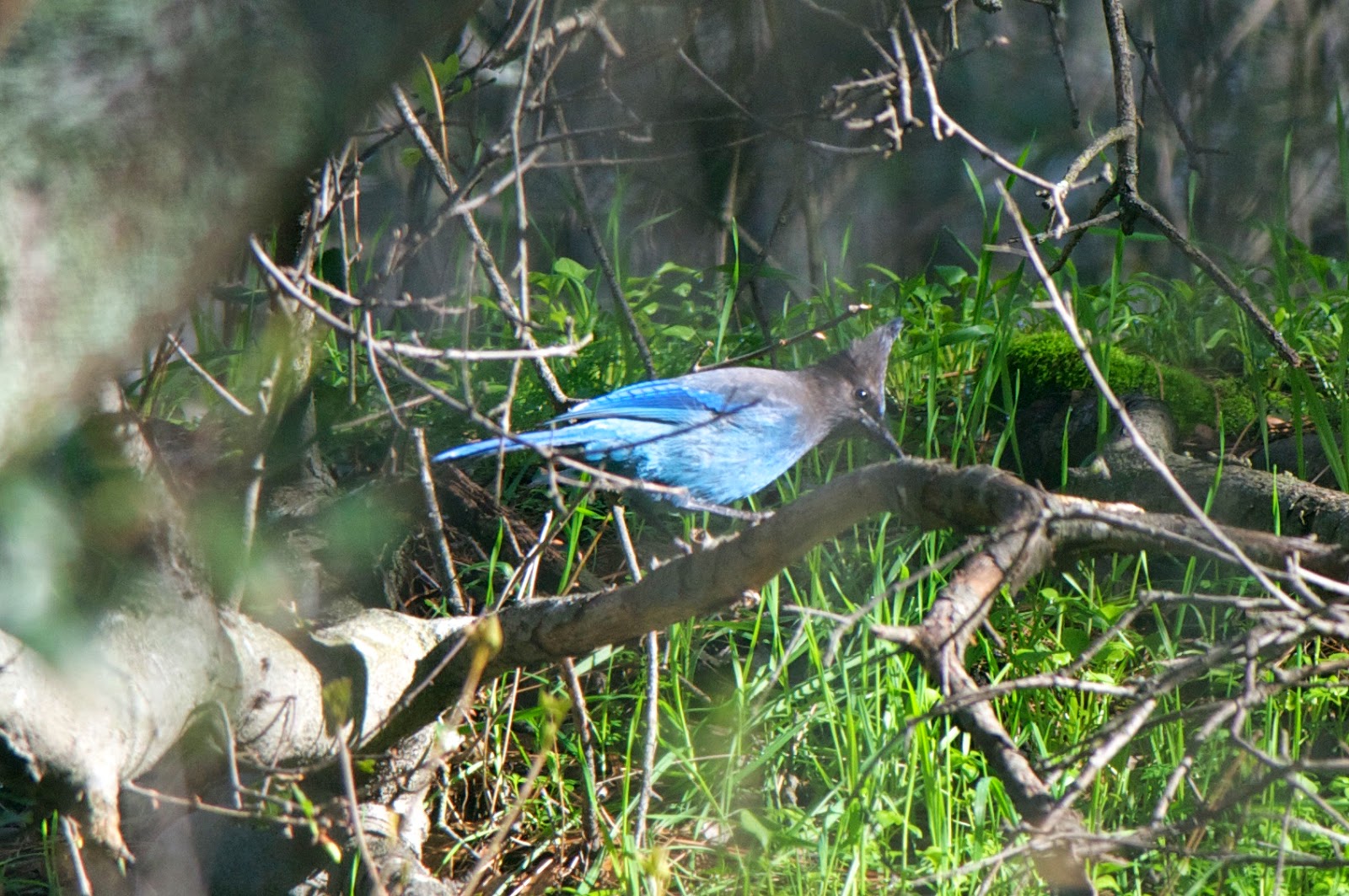