Two weekends ago we ventured up to Alpine County to look around and to start our county list.  This past weekend we ventured to somewhere a little warmer, much more cloudy, and a lot more rainy.  Although I had made the round-trip to go see the COMMON SCOTER in Crescent City earlier in the week, that was only half of the household.

Yep, I drove back to Crescent City, this time with my more attractive half, to see this first ABA record yet again.  However, I certainly didn't spend much time trying to better my photos from last time, I left that to the crowd of 15-20 birders.  Here's one of the few photos I did take: 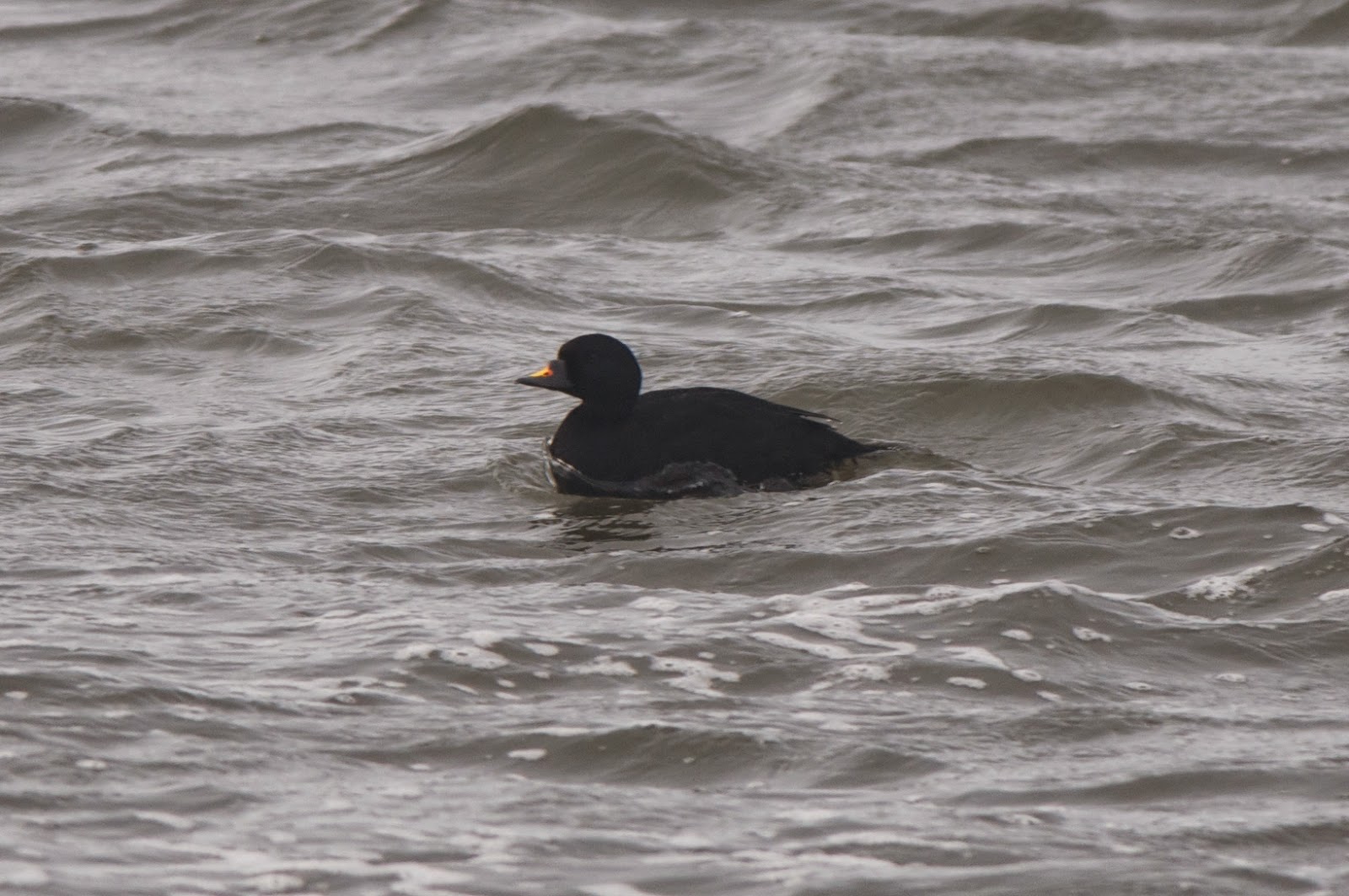 It was fun seeing it mixing with other birds though (something it didn't do on my first trip).  Also in the area:

Here's one of the COMMON LOONS loafing about: 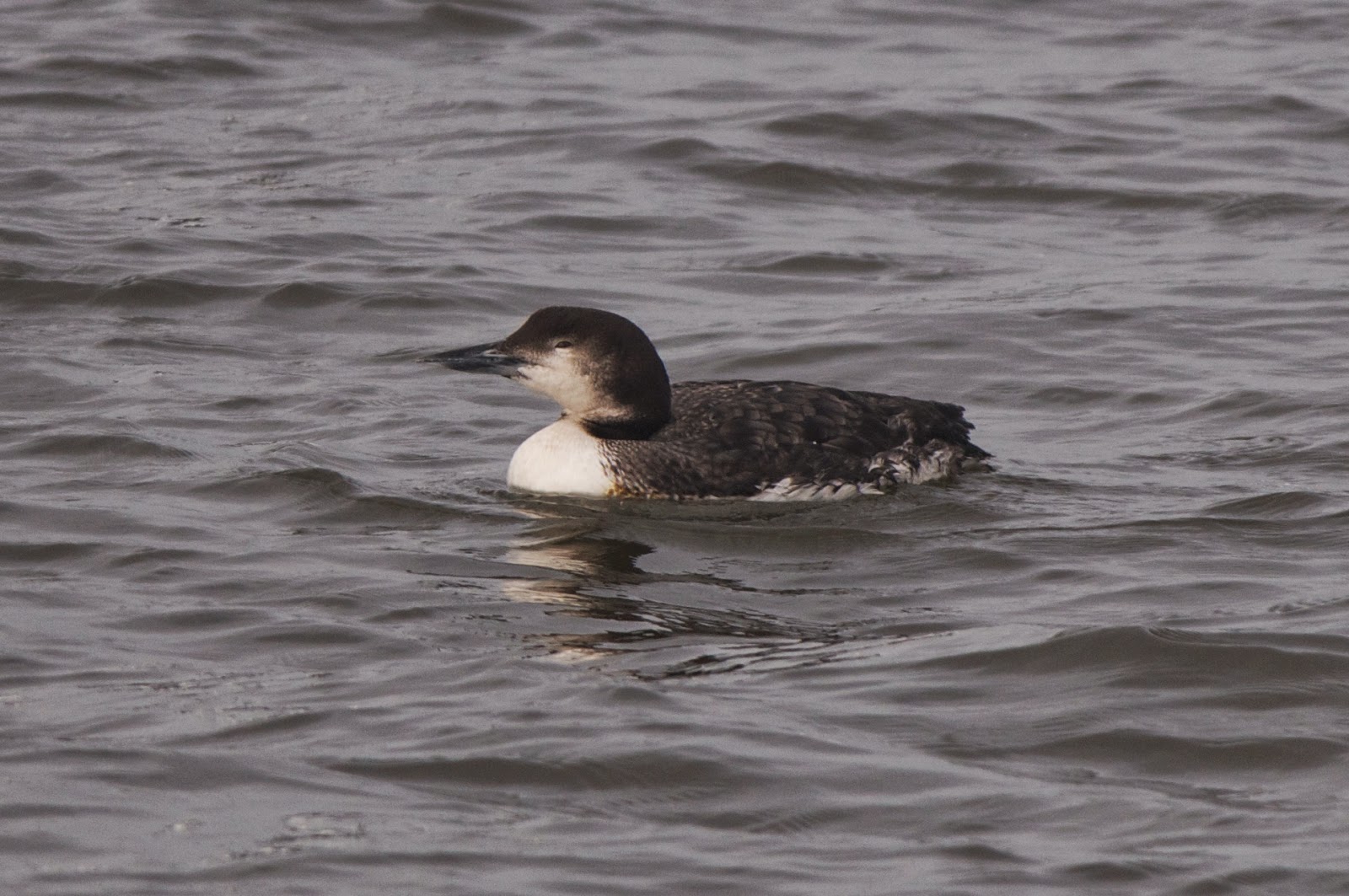 While everyone was watching the scoter, I was being more entertained by the gulls roosting on the docks.  For example, here's a handy comparison; a GLAUCOUS-WINGED GULL sandwiched between two WESTERN GULLS: 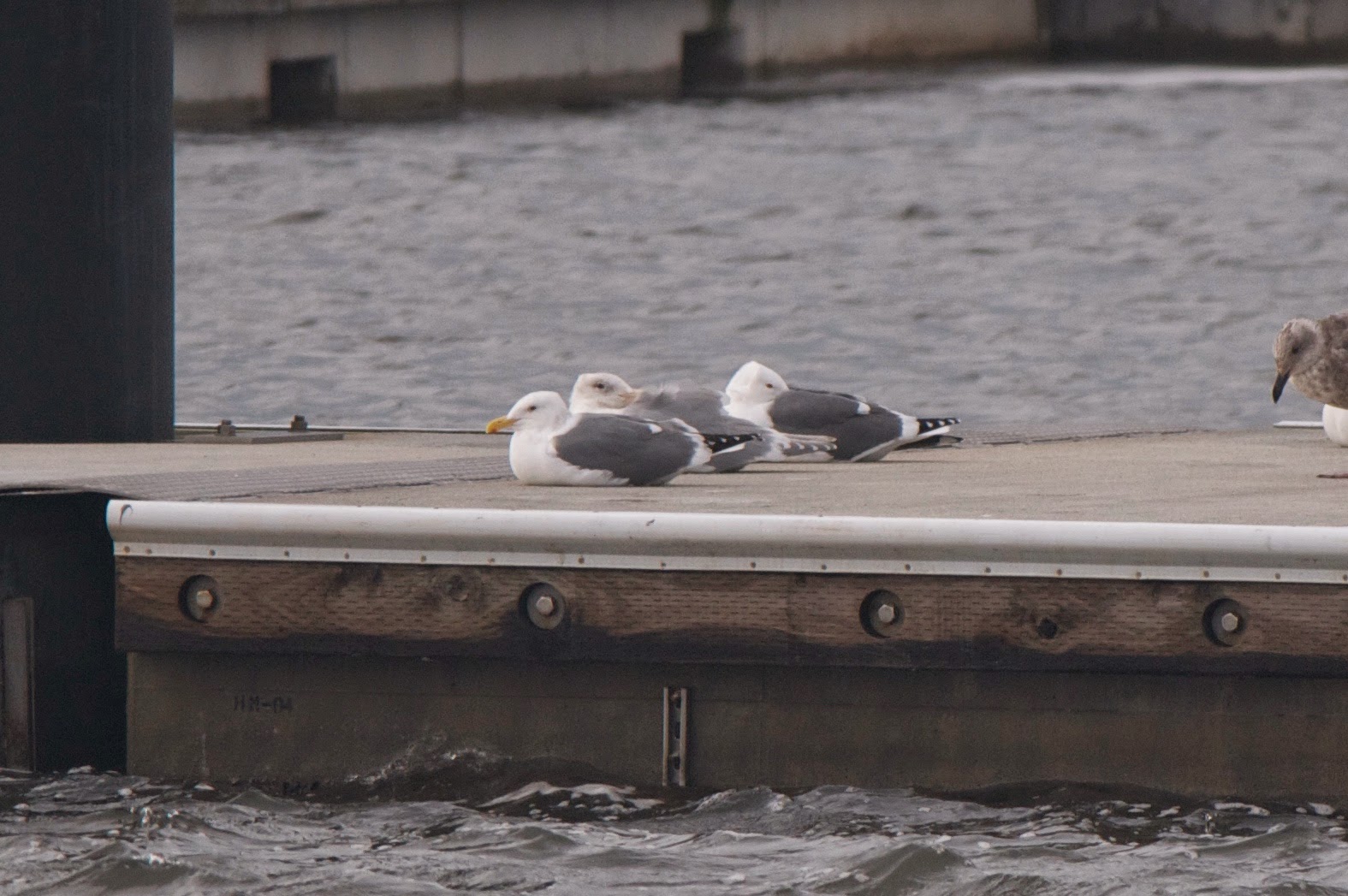 On the GWGU, you can see the paler mantle, the dirtier head, and the gray primary tips that match the shade of the mantle.

Most birders knows that the darkness of a gull mantle can change drastically based on the angle at which you're viewing it from.  Here's a likely example; the standing bird is probably at a slightly different angle than the sitting birds: 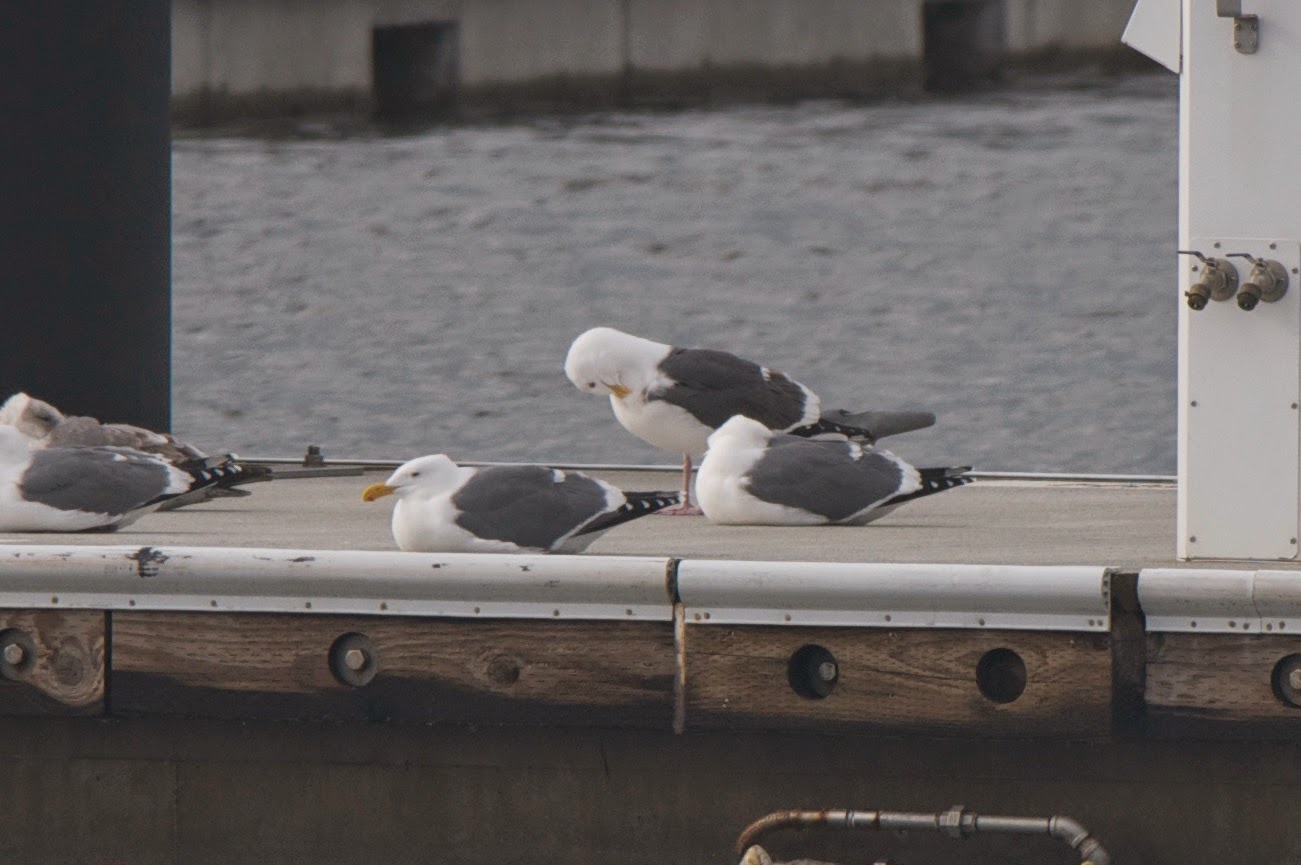 Anyway, you can see our quick checklist from that stop here.

The next morning on our way back we stopped at the College of the Redwoods with only one thing in mind, trying to relocate the RED-NAPED SAPSUCKER that has been present since early January.  Everyone said it was very reliable and easy but having never tried, I couldn't speak from experience.  Ashley and I found the college, walked the mowed trail between the two ponds, turned left, and Ashley stopped dead in her tracks... the bird was right where it was supposed to be.  We watched it for a few seconds before it flew north into the woods and out of sight.  We waited a minute or two and soon it came zooming back to its favorite tree.  This time, however, it had a cherry-like fruit that it had brought from the woods.  We snuck around the tree and found that the bird had jammed the fruit into a column of sap wells and was chowing down on it: 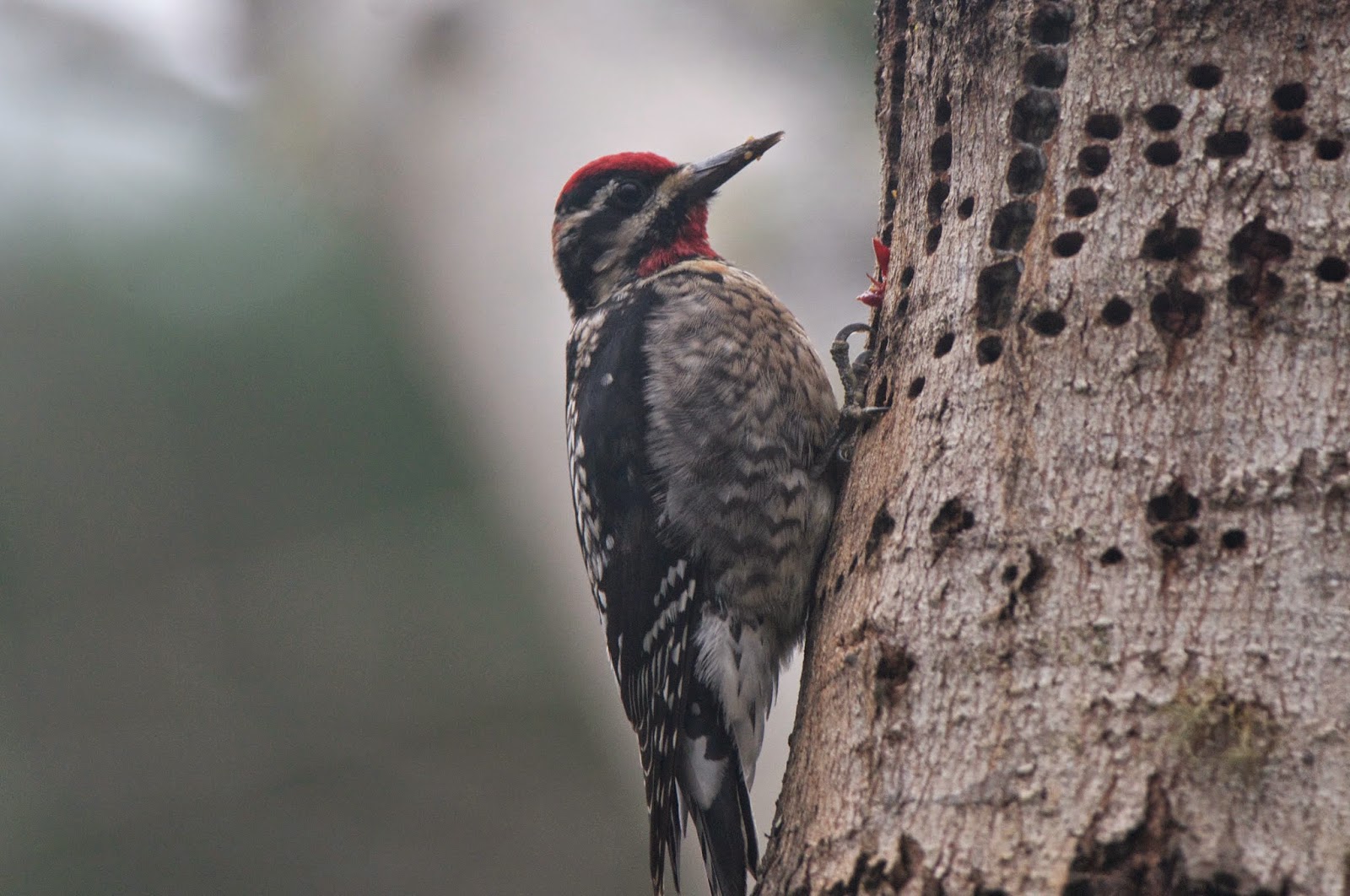 It deftly removed the pit too before proceeding: 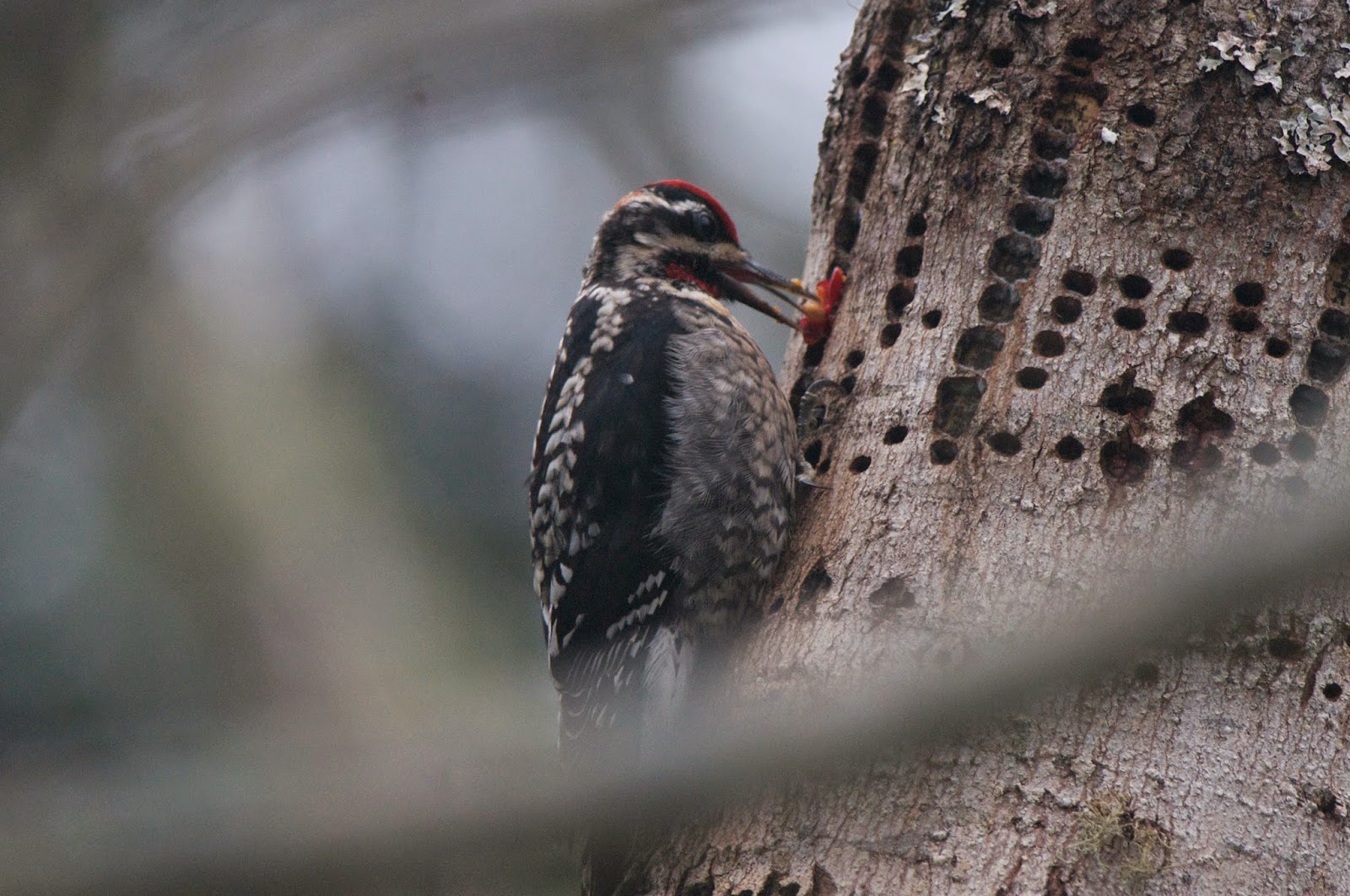 Anyway, it was a pretty sharp-looking bird: 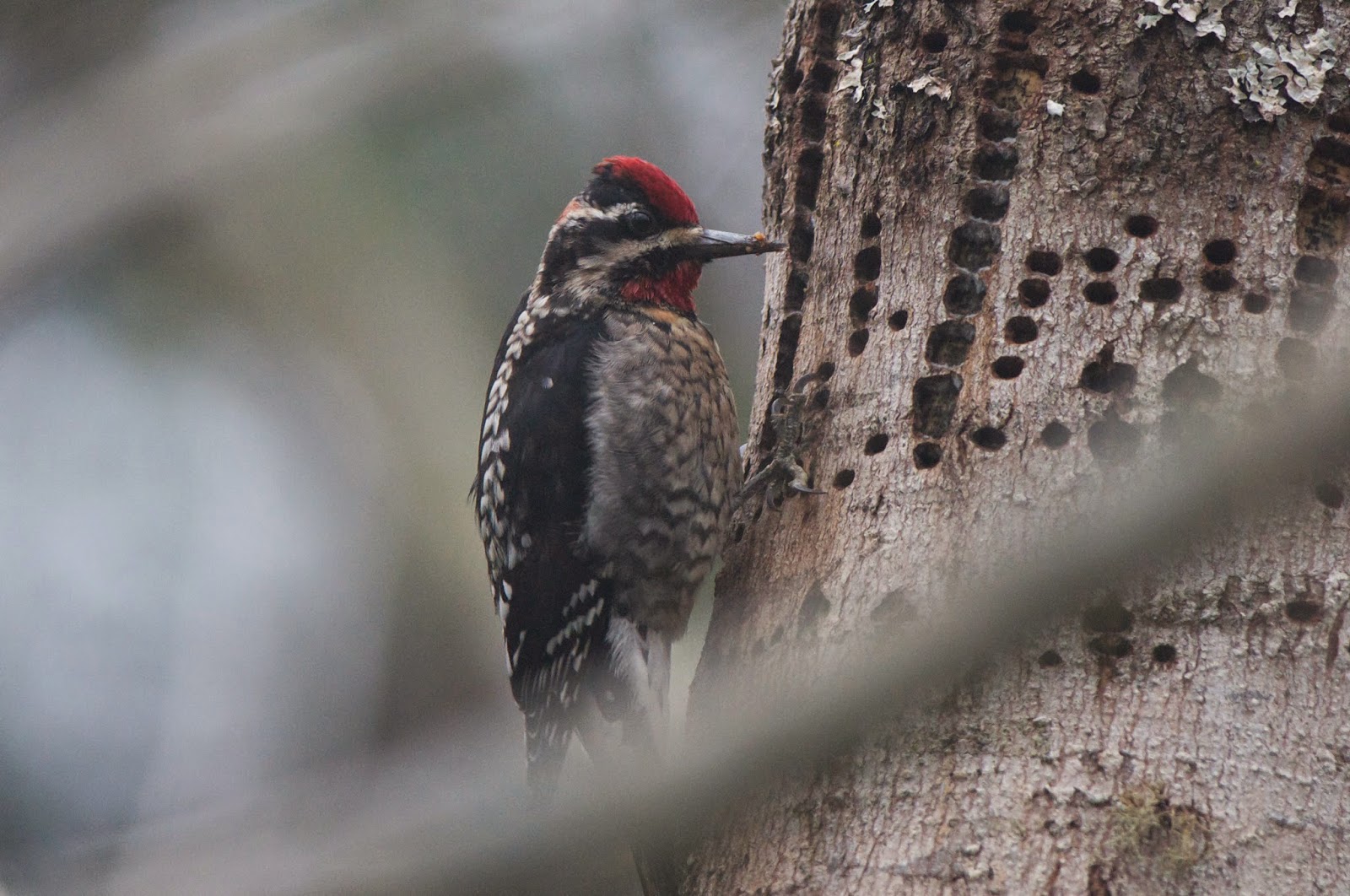 So that worked well.  It was our first pure RNSA for California (they're more of an Interior West species).  Here's our checklist; we were only there for 18 minutes in total before the rain really set in and we hauled our satisfied selves back to the car and continued towards home.
Posted by Cory J. Gregory at 2/09/2015 10:11:00 AM