February is already winding down and, at least here in the Central Valley, you can definitely tell spring is on the way.  It's getting light earlier and staying light later, more species are in full song, and many of the trees are in bloom.  Where I grew up, this weather is more befitting of April.  But considering my summers as of late have been chilly and drizzly, I won't complain about the warmth and the oddity of an early spring.

Although it's gotten warmer, that doesn't necessarily mean that the species composition has changed a whole lot.  Because of that, I haven't done that much birding in the past week or so.  However, one species has drawn me in a couple of times; the HAIRY WOODPECKER that continues to be seen along the shore of Lake Natoma.  Although I had already seen and gotten documentation pictures of this very rare Sacramento County woodpecker, I returned recently to see if it still was around.  It didn't take long and I soon traced the call notes down to the bird: 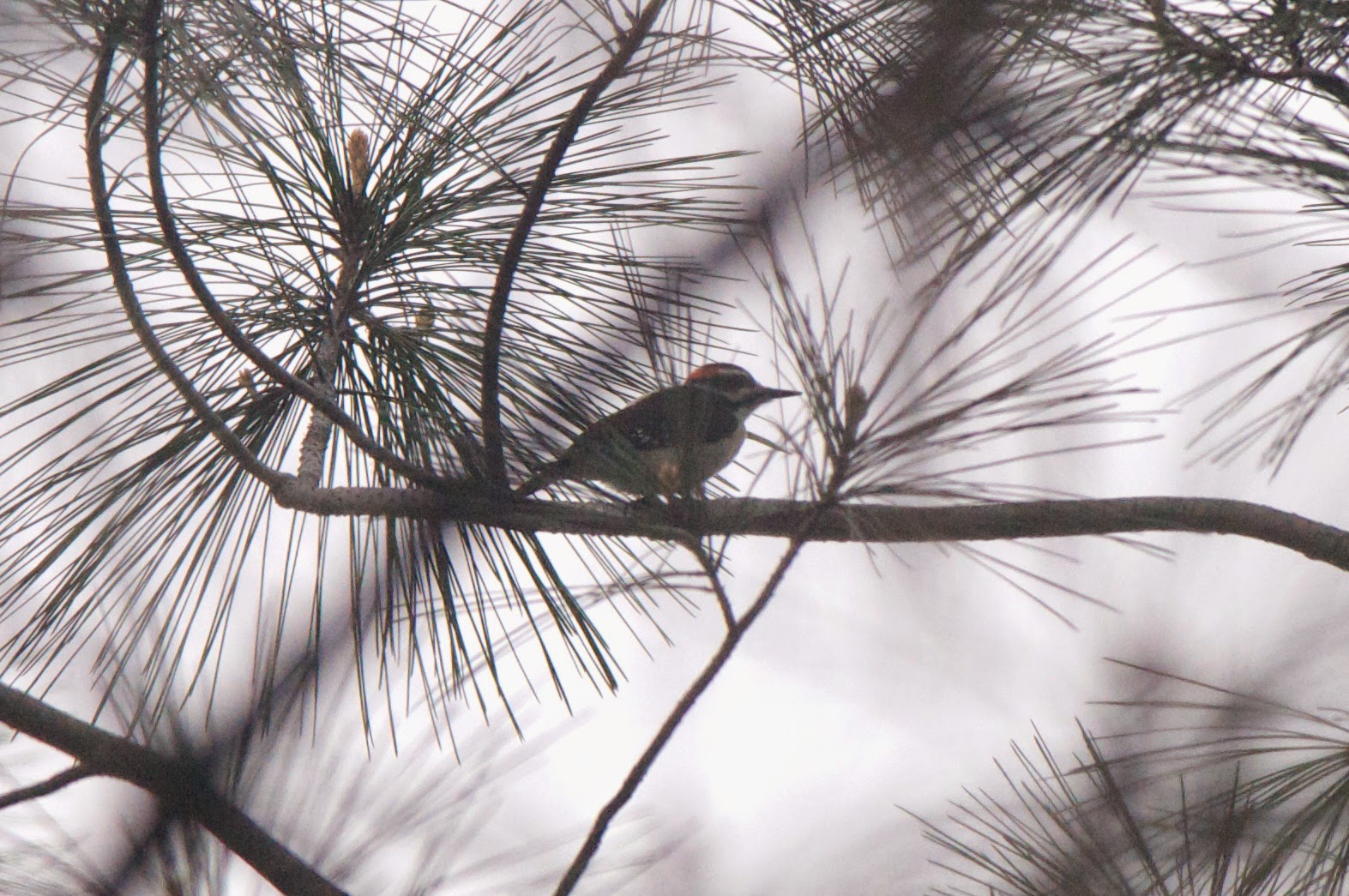 The bird wasn't as bold this time around but at least it was still present.  Because of its continuing presence and my seemingly good luck in finding it, I returned over the weekend but this time with Ashley who still needed it for county.  It again took a while to be cooperative but we eventually got to see and hear it in the same area as before.  Here's proof: 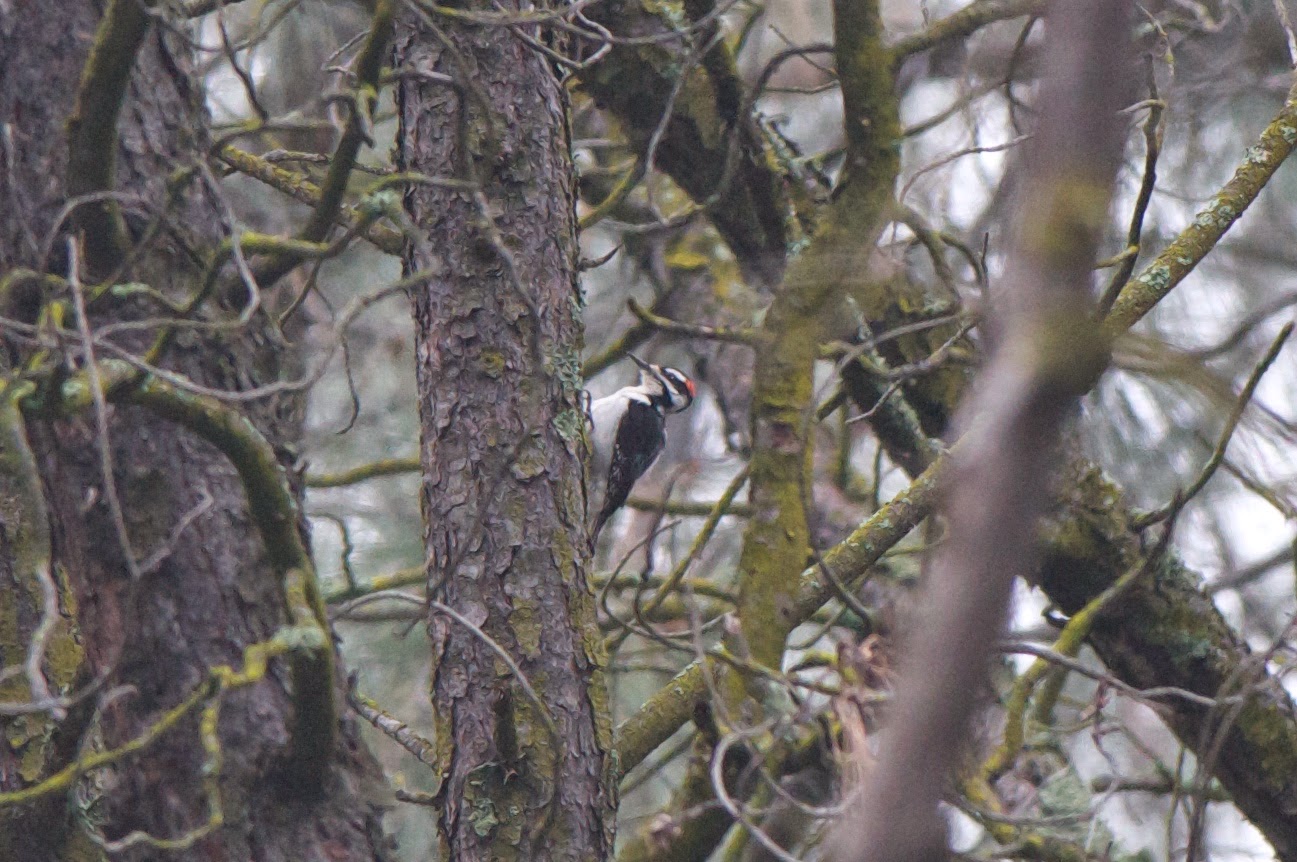 Another species we targeted that weekend was GREAT HORNED OWL which would have been a county year bird.  We used eBird to find all the recent GHOW records in the county, followed up on an eBird report of a nest on Elverta Road, and sure enough, there was a bird sitting in a nest high on the antenna/tower just to the west of Hwy 99: 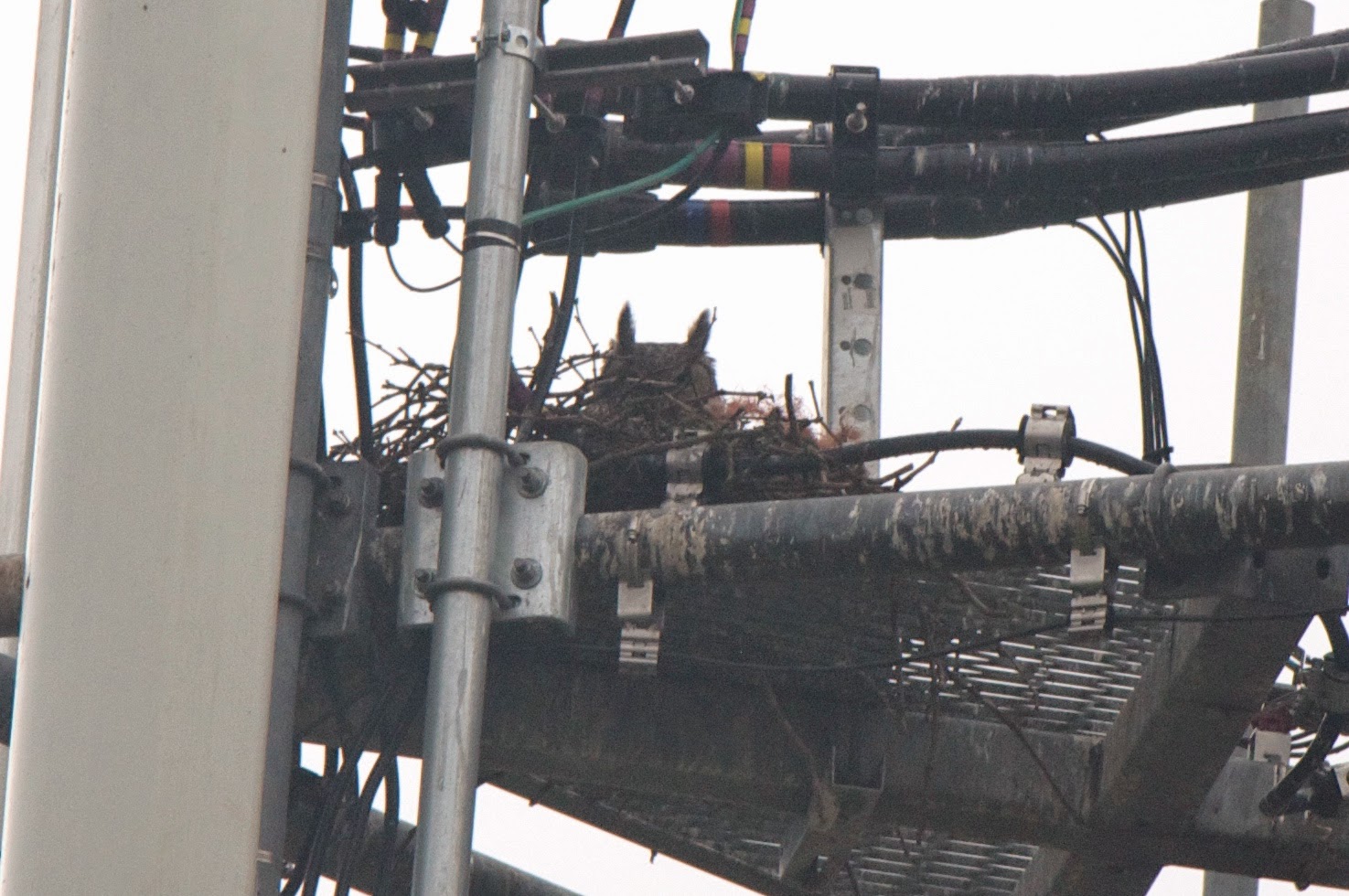 Back home, I've continued to keep track of yard birds this month and eBird tells me I'm at about 46 species in February.  Some recent sightings include a young BALD EAGLE, newly-arrived CLIFF SWALLOWS, SANDHILL CRANES migrating north, and this continuing OSPREY: 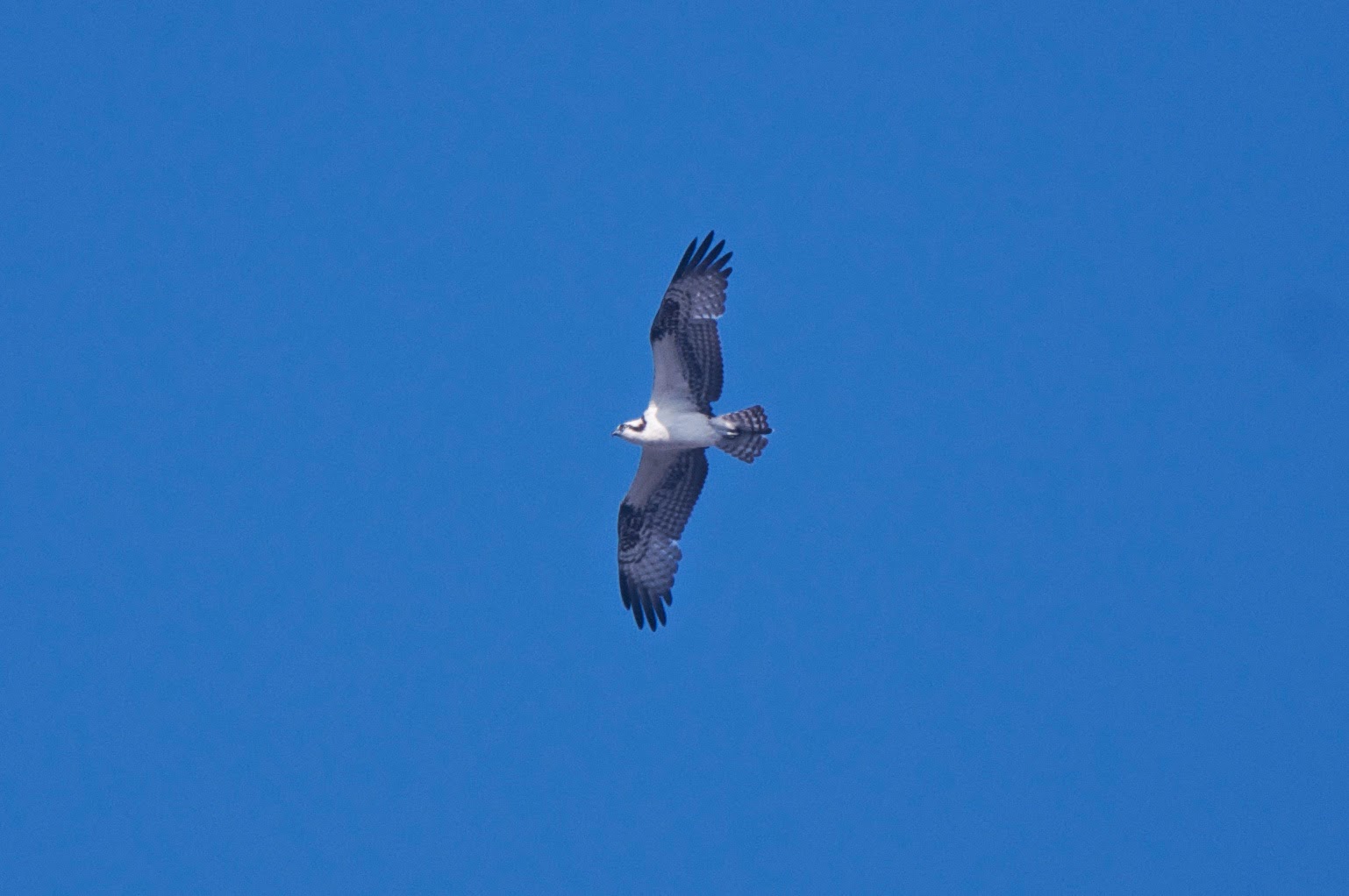 Yesterday warmed up nicely into t-shirt weather and I visited Cosumnes with the sole purpose of seeing if any butterflies or other insects were flying.  I didn't see more than a couple of species of butterflies though and the only damselfly I saw was this one perching on flowers: 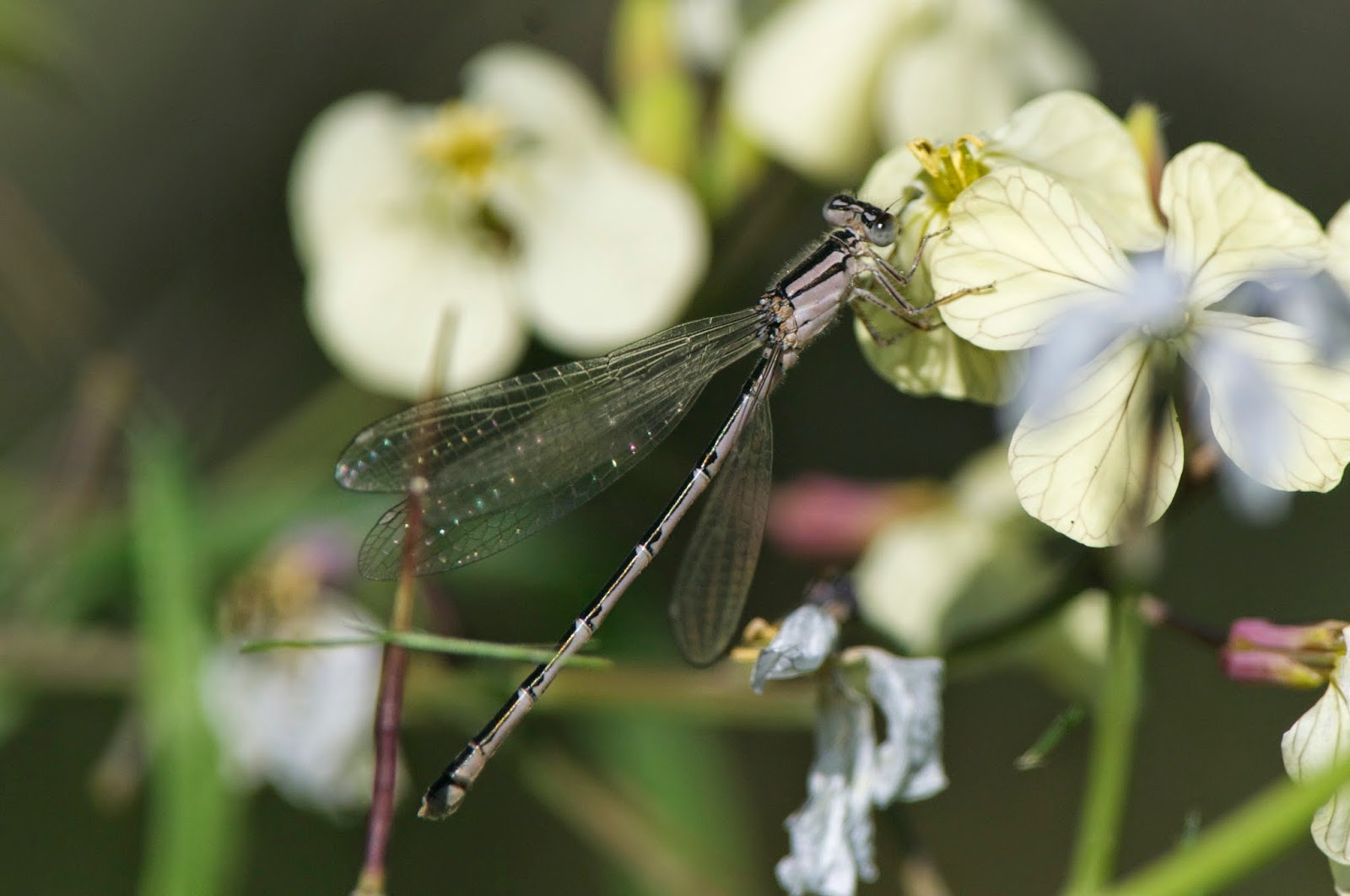 It looks to be either a Tule Bluet or Familiar Bluet.  The only problem is that females like this aren't easily differentiated (at least not by me!).

I did end up keeping a list of birds though; I ended up with 41 species in 39 minutes (checklist here).  I came across a pair of BUSHTITS attending their newly-made nest which was fun to watch.  The sock-like nest drooped down nearly a foot.  Here's a picture of the nest and, if you can spot it, the head of a BUSHTIT: 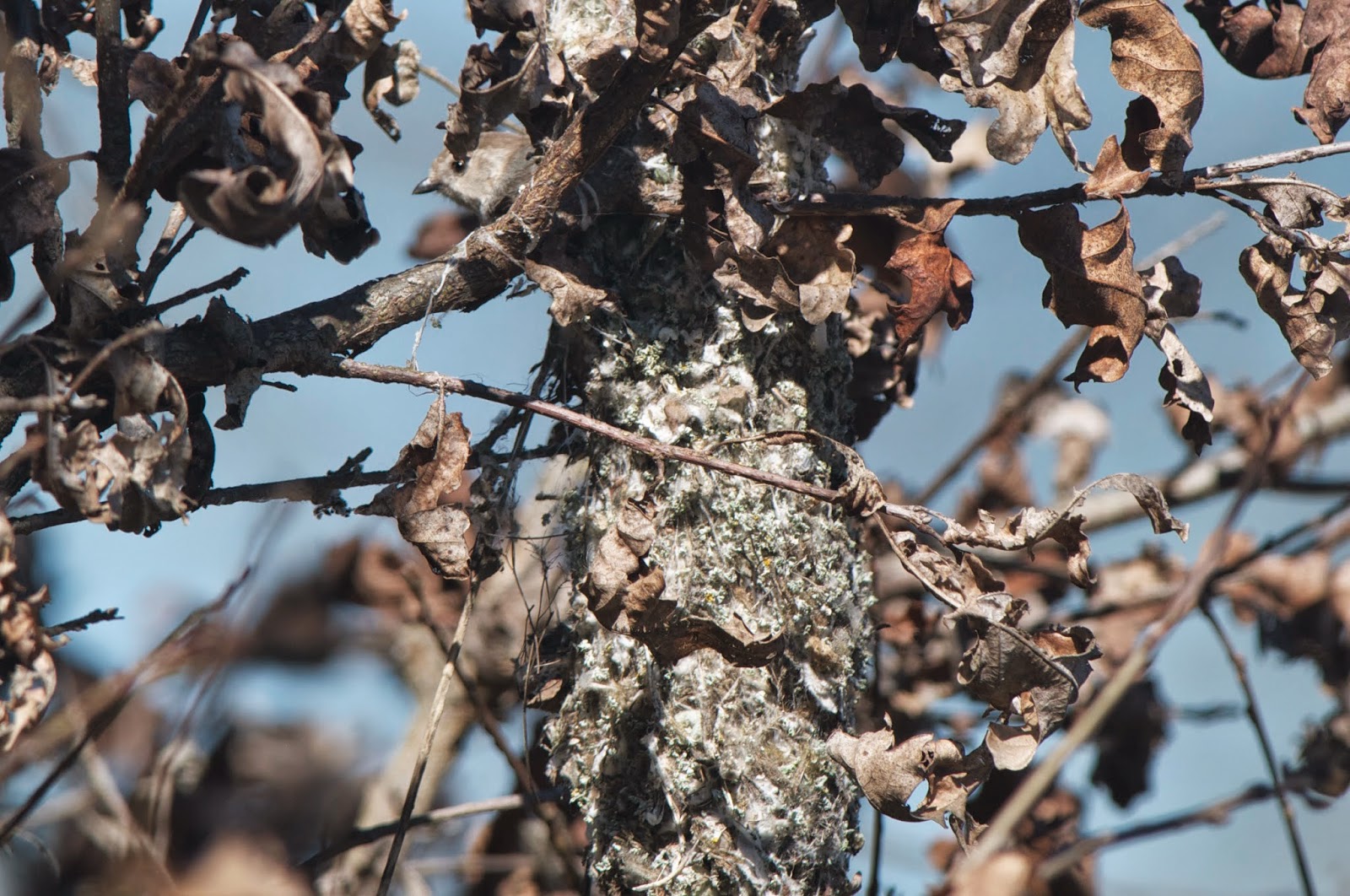 GREATER WHITE-FRONTED GEESE are still plentiful these days and I tallied more than 1.2k at this particular stop.  Other places in the Central Valley might be dominated by white geese but at least down here close to the San Joaquin Valley, it's the GWFG that dominate things.  And because I had nothing else to photograph, I even took a picture of one: 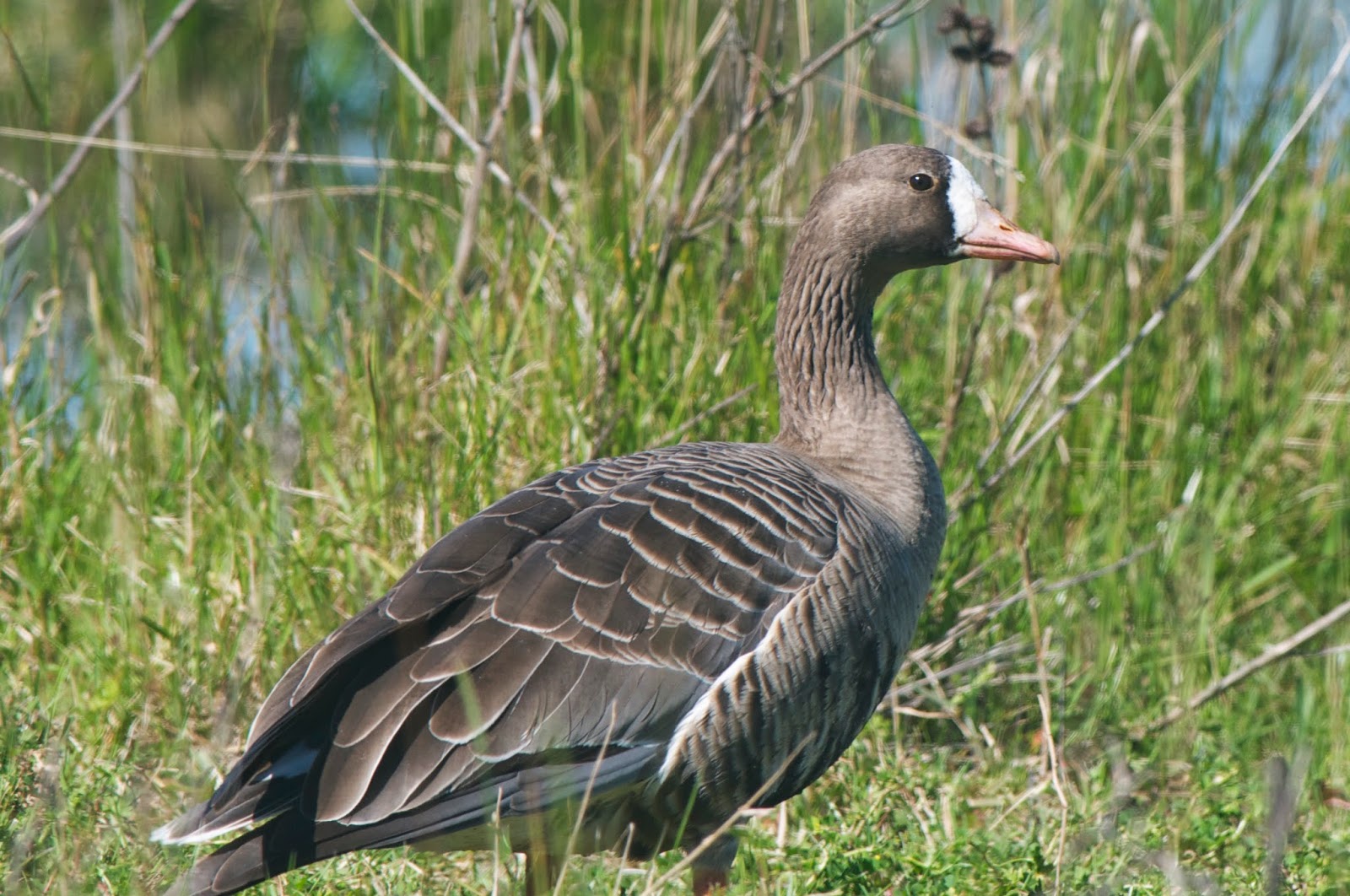