First, it's STILL windy.  How windy?  Really windy.  We've had days on end with 40+ mph winds out of the east/northeast.  Even now, it's howling outside, coating everything out there with a lovely layer of dirt/sand.  Scoping bodies of water is not feasible.  Even opening your door can be a challenge sometimes.  You know it's windy when you go to empty the lint trap in the dryer and the lint magically ejects itself in your face.  Yeeeah.  The waves, however, are spectacular: 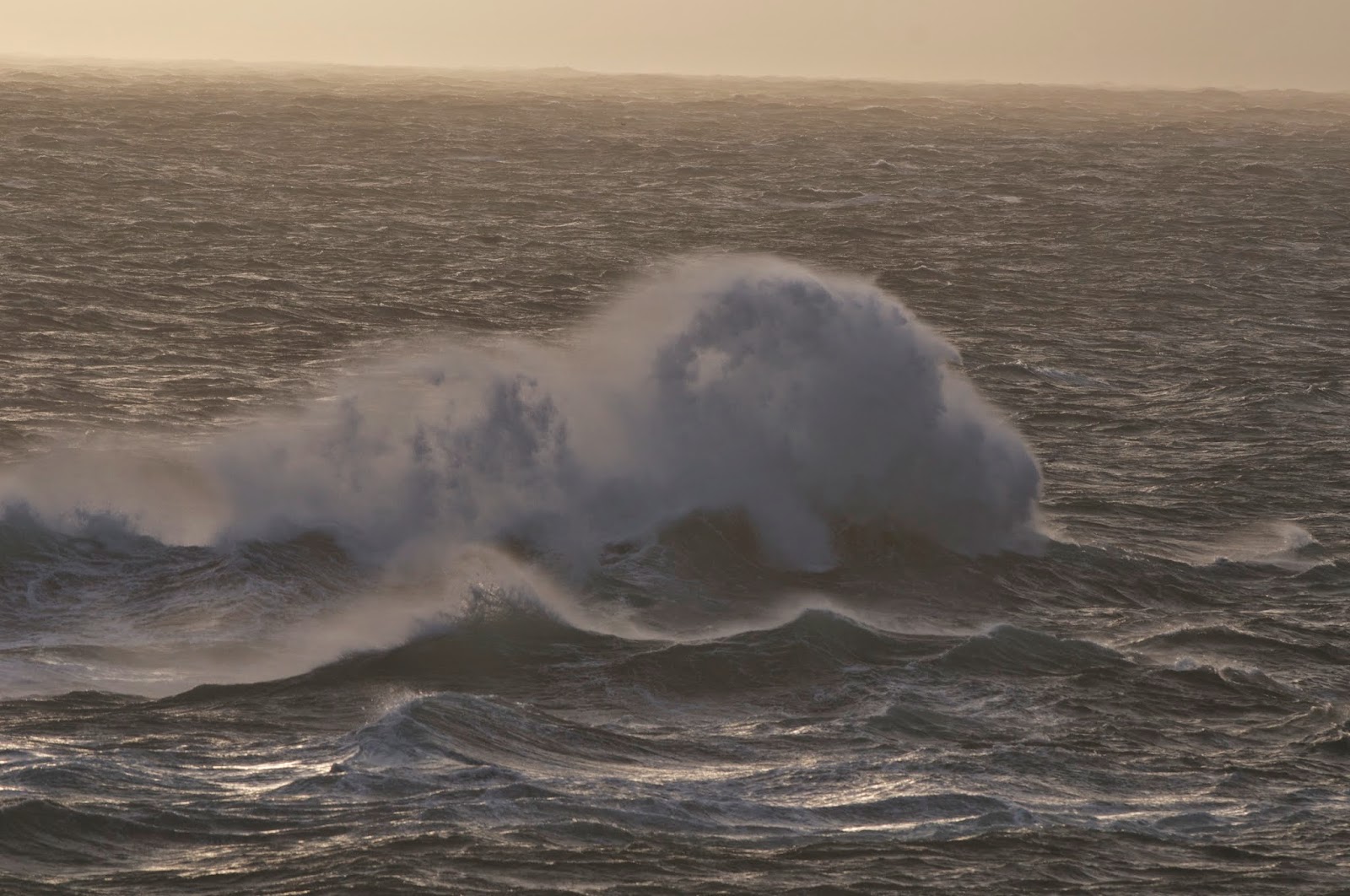 Speaking of waves, a client and I enjoyed watching the HARLEQUIN DUCKS handling the rough water.  This little duck, and the fact that it's perfectly comfortable combating seas like this, is amazing: 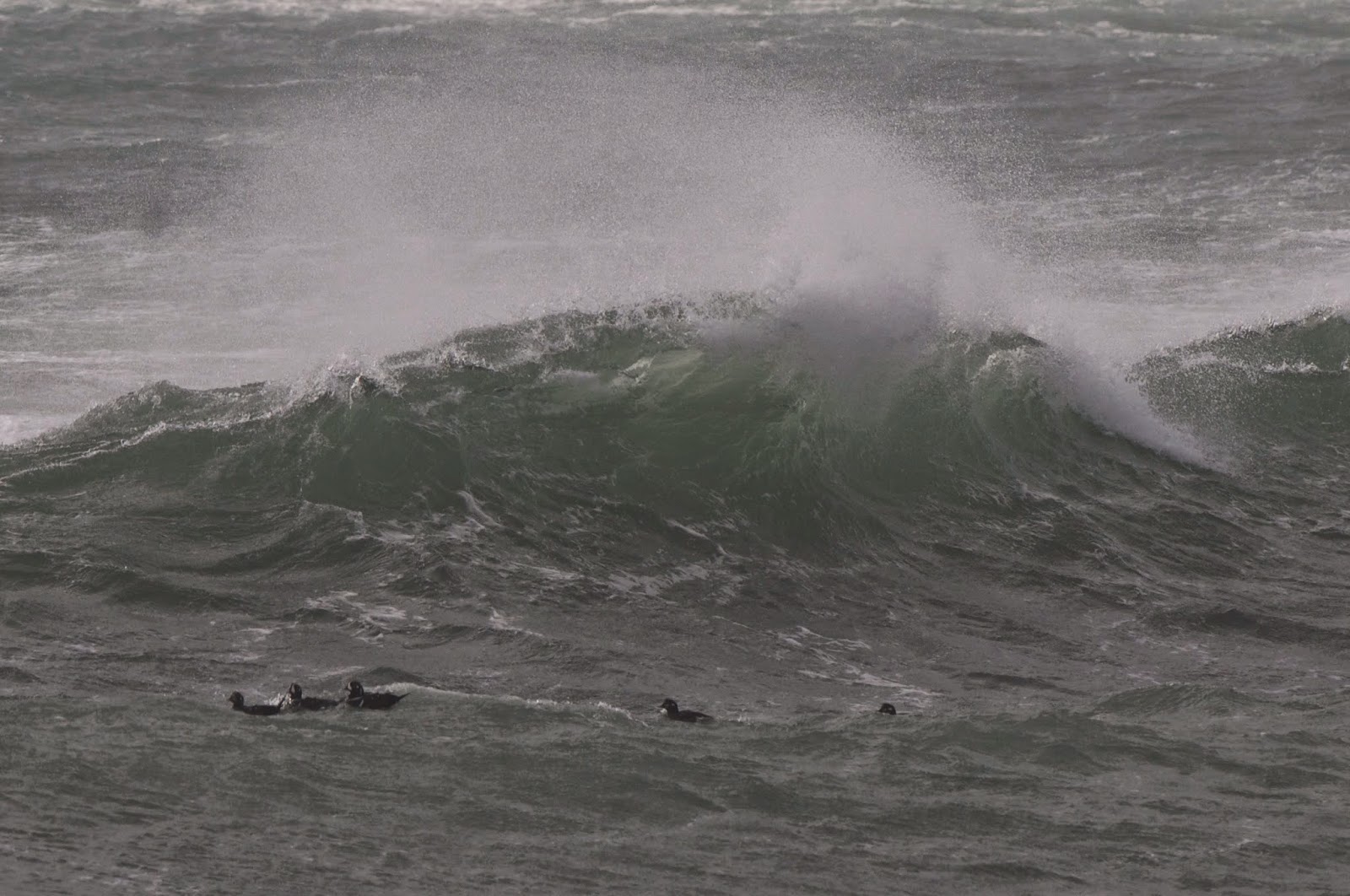 But yeah, it's pretty startling to realize that I fly off the island a week from tomorrow!  It's been a great fall though; I think we're at 129 species which ties the previous high-count for a fall season.

Anyway, remember in the previous post when I heard about a newly-arrived MCKAY'S BUNTING?  Well, I finished that post and ventured towards SW Point to try my luck.  As I was pulling up to the first lava field, lightning struck in the form of a little white bird that flushed up in front of me!  I had somehow managed to relocate the bird, my lifer MCKAY'S BUNTING.  Here it is on the left with a SNOW BUNTING on the right: 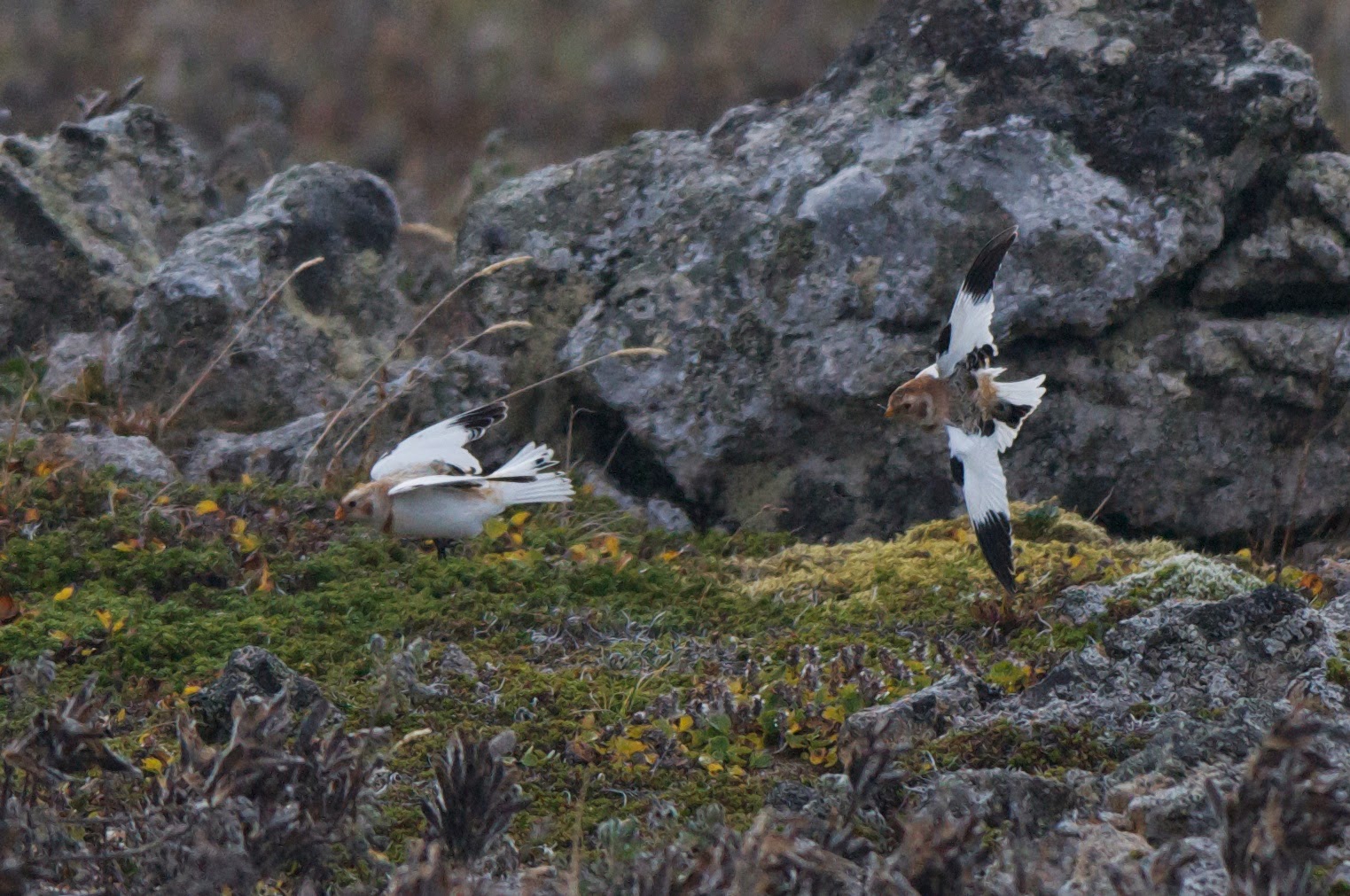 Check out the limited black in the tail compared to the SNOW BUNTING.  Here's another shot showing the tail: 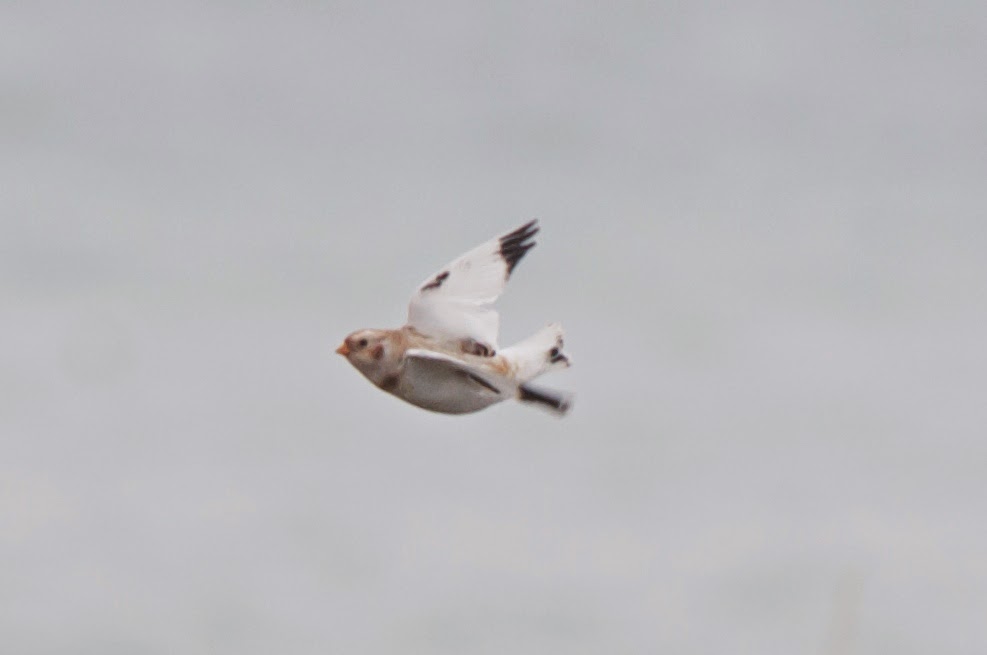 ... and the limited black in the wing is spot-on for McKay's: 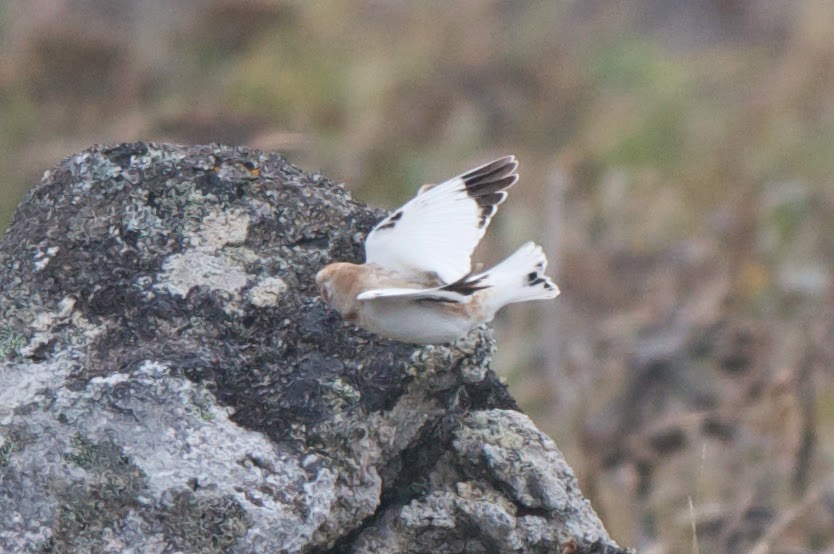 On the ground, the white on the mantle/wings was incredibly obvious: 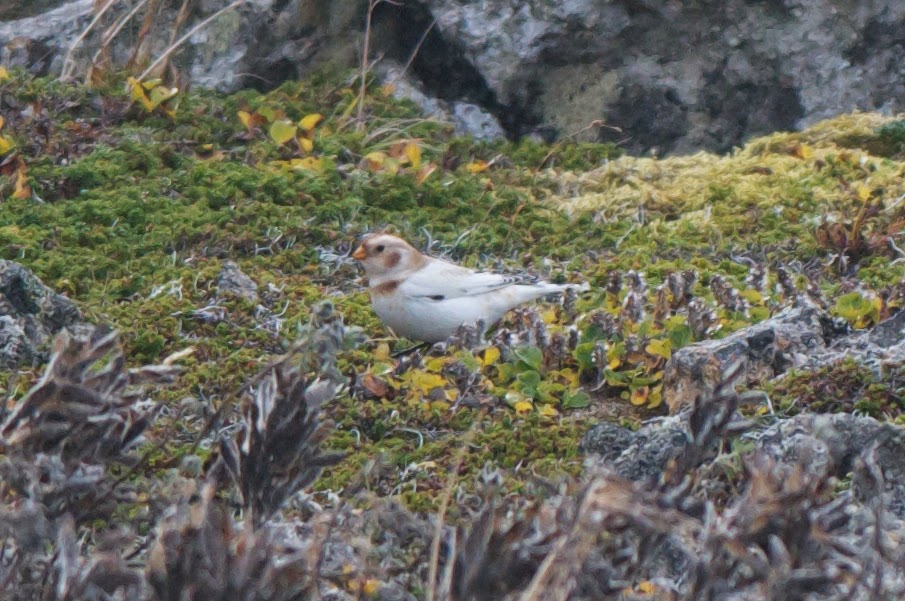 Best we can tell, this is a male, maybe even an adult male: 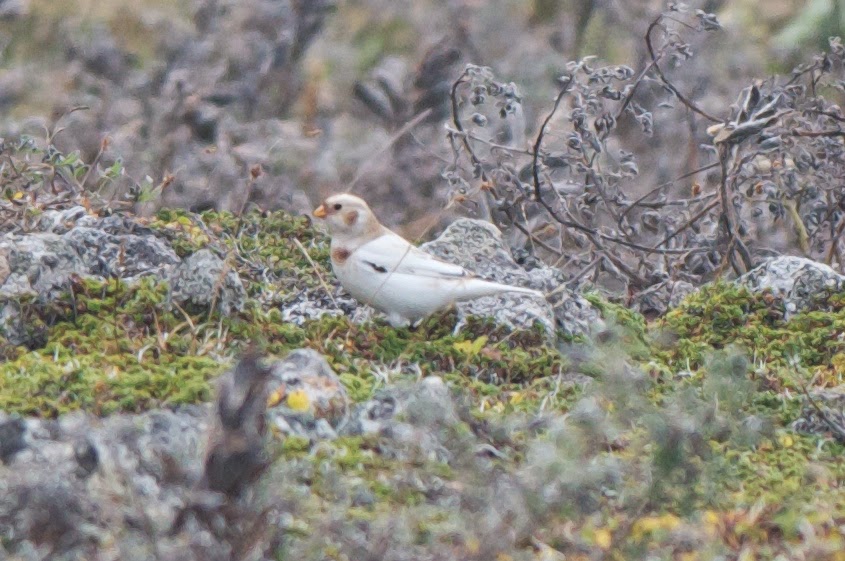 So yes, I shaved.  I'm quite happy to have bumped into this species; I will not be making any flights to Nome during some future winter!  Also, it's an ABA breeder and as I've mentioned before, I'd like to "take care" of those.

American waterfowl continue to stick here (for obvious reasons, they probably won't be migrating anytime soon).  For instance, the GADWALL is still on Antone Lake: 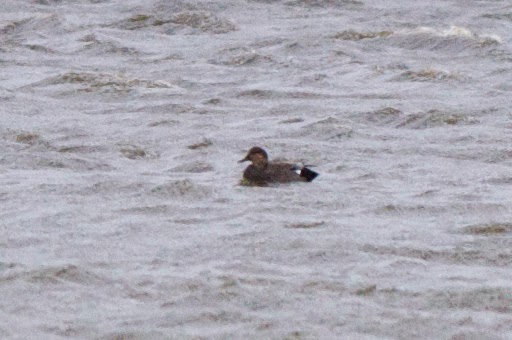 We've also seen an increase of American gulls too.  For example, there were at least two "American" HERRING GULLS on Salt Lagoon yesterday.  Notice the pale eye: 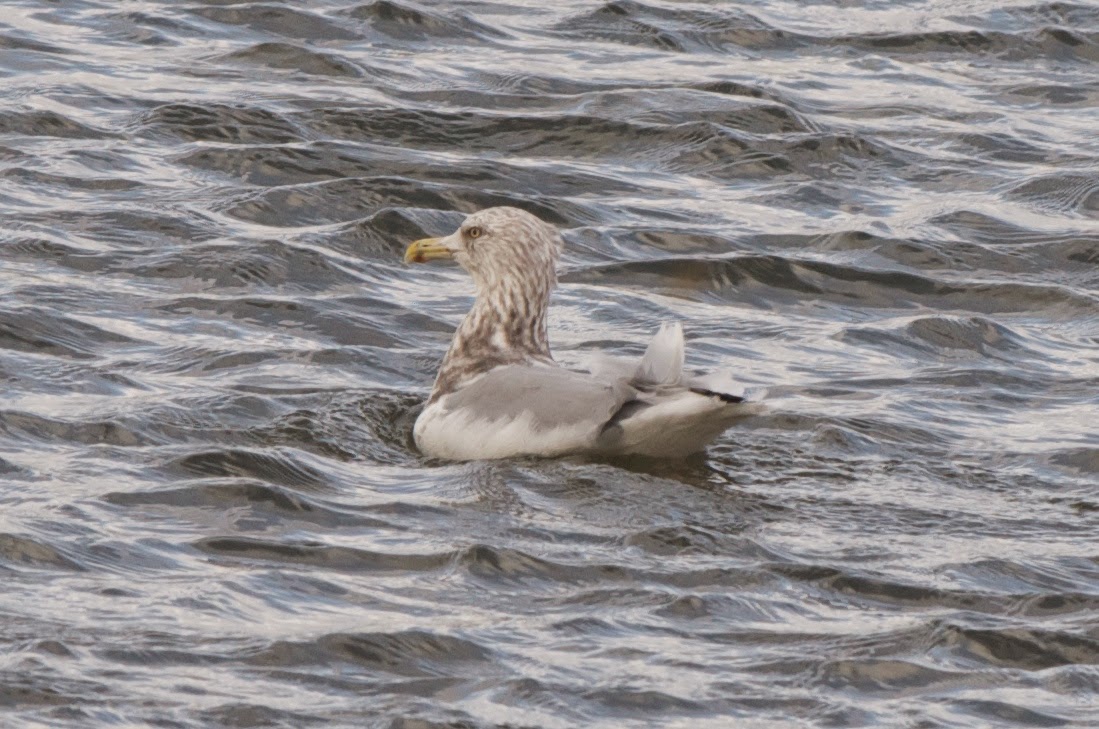 However, the best American gull was a MEW GULL on Weather Bureau Lake!  It's not a great photo but it works: 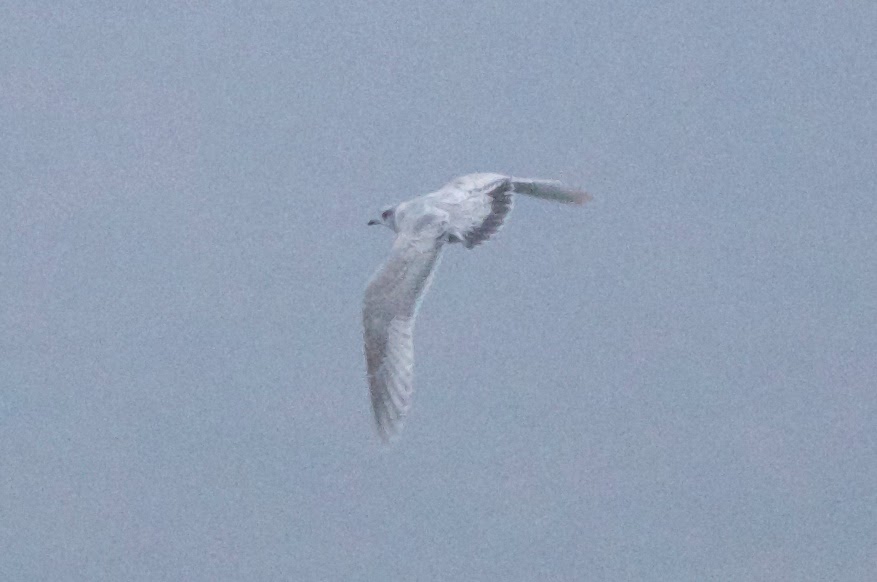 This Mew Gull, our first this year, is a full 2 months beyond the previous late date for the island.  Was it shuttled here by the insane east winds?  Likely.

Some gulls aren't unexpected, like this GLAUCOUS GULL mixed in with GLAUCOUS-WINGED GULLS.  If you don't know what to look for, pay attention to the wing tips; look for one with pure white tips and also a pale eye: 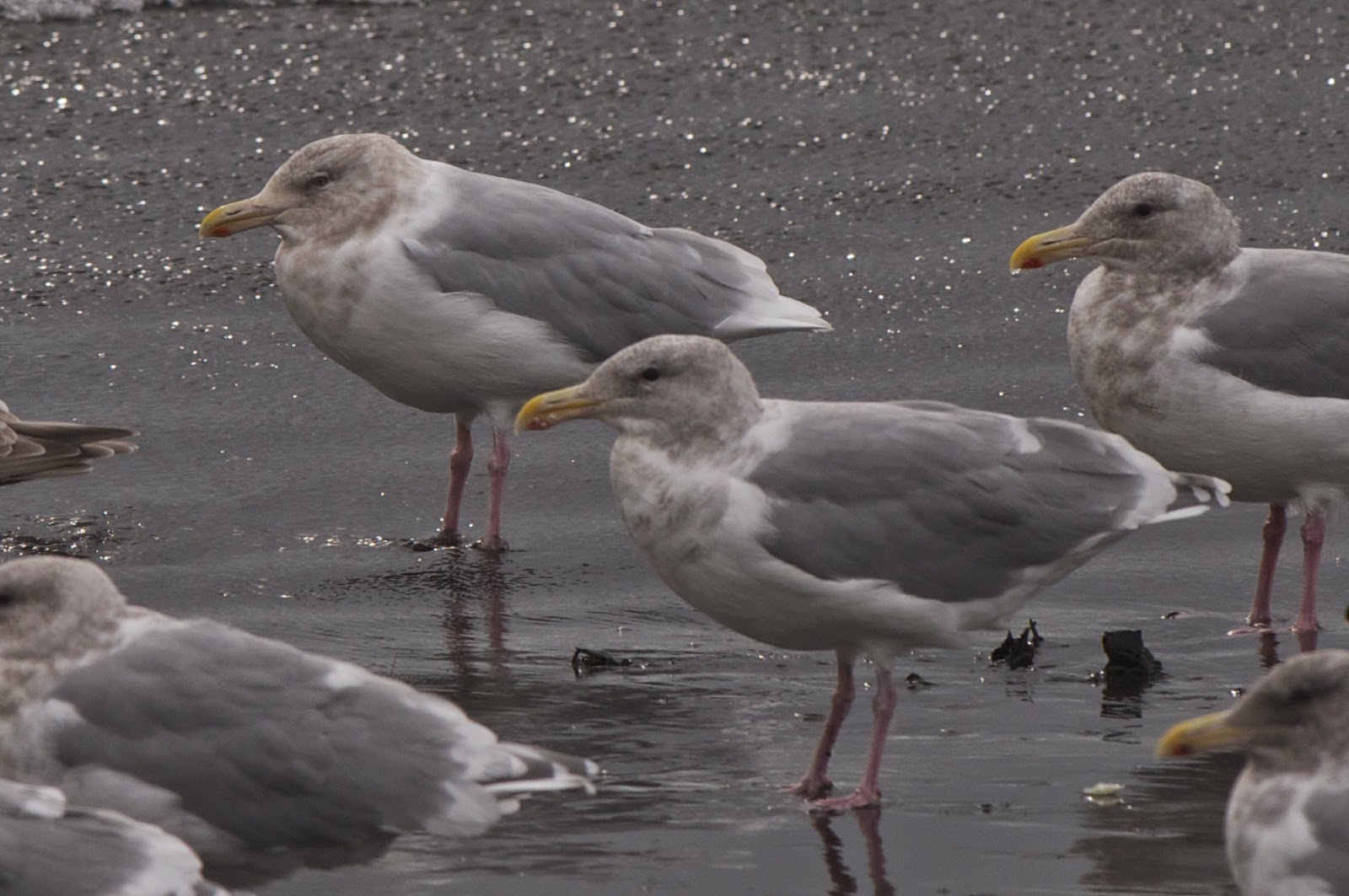 One benefit to the howling wind is that many of the RED PHALAROPES opt for "dry land" instead of the roiling Bering Sea.  They come ashore en masse and inundate all the bodies of water (and roads).  Here is my best RED PHALAROPE picture of the year, a juvenile transitioning to its gray winter plumage: 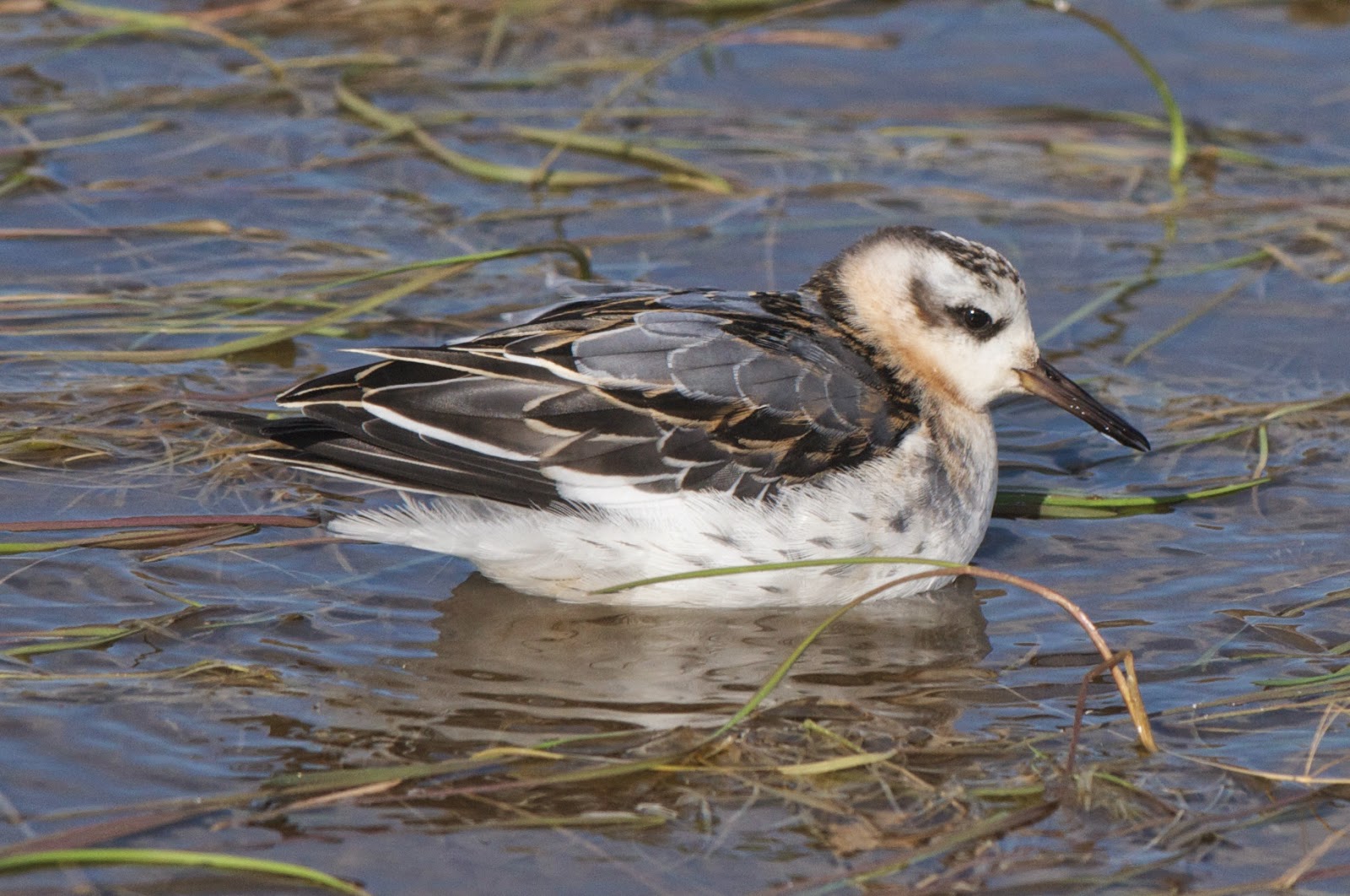 I'll end with a horrible set of nice photos.  Redpolls.  Some definitely look fine for Common but many of them show intermediate fieldmarks.  Enjoy: 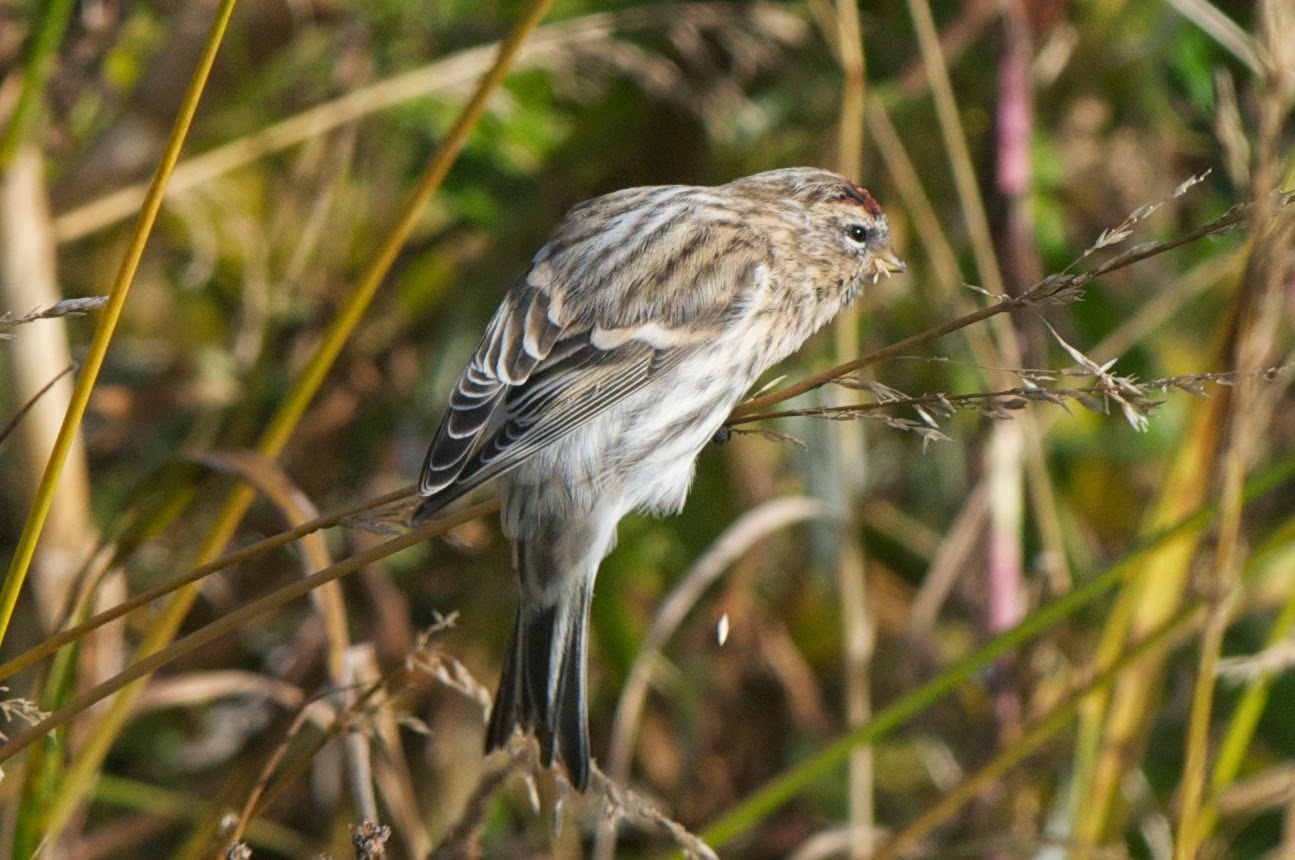 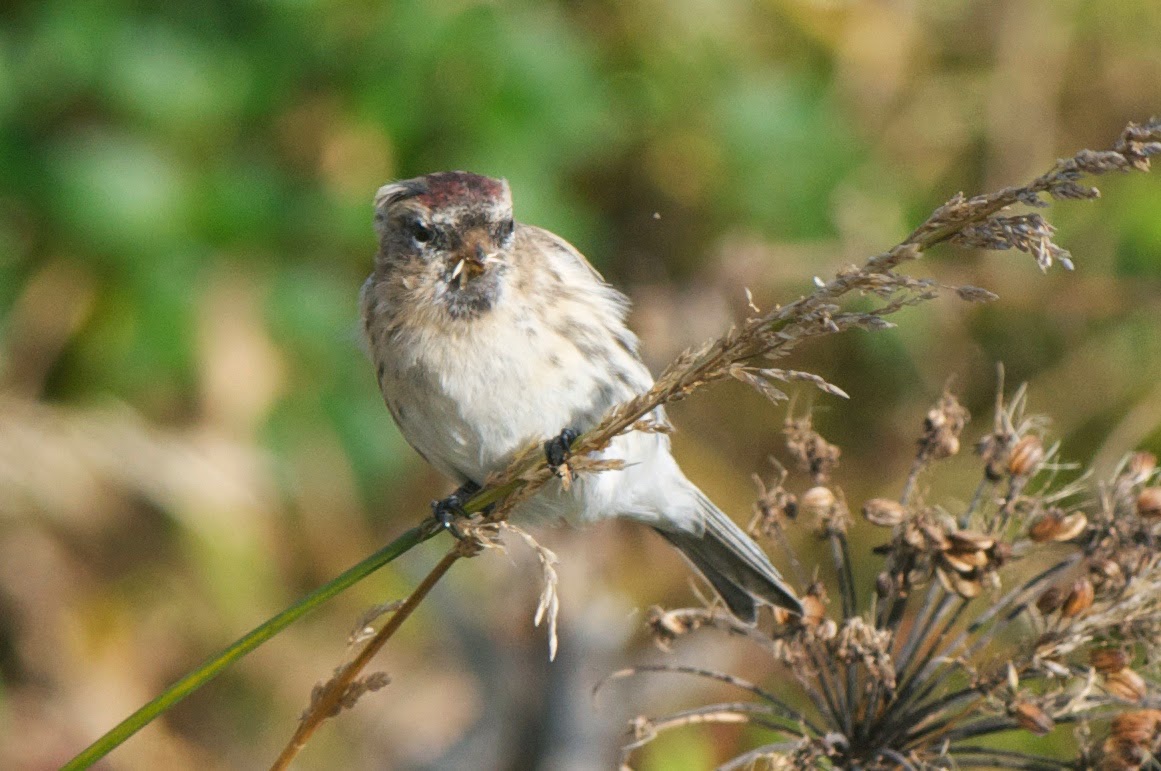 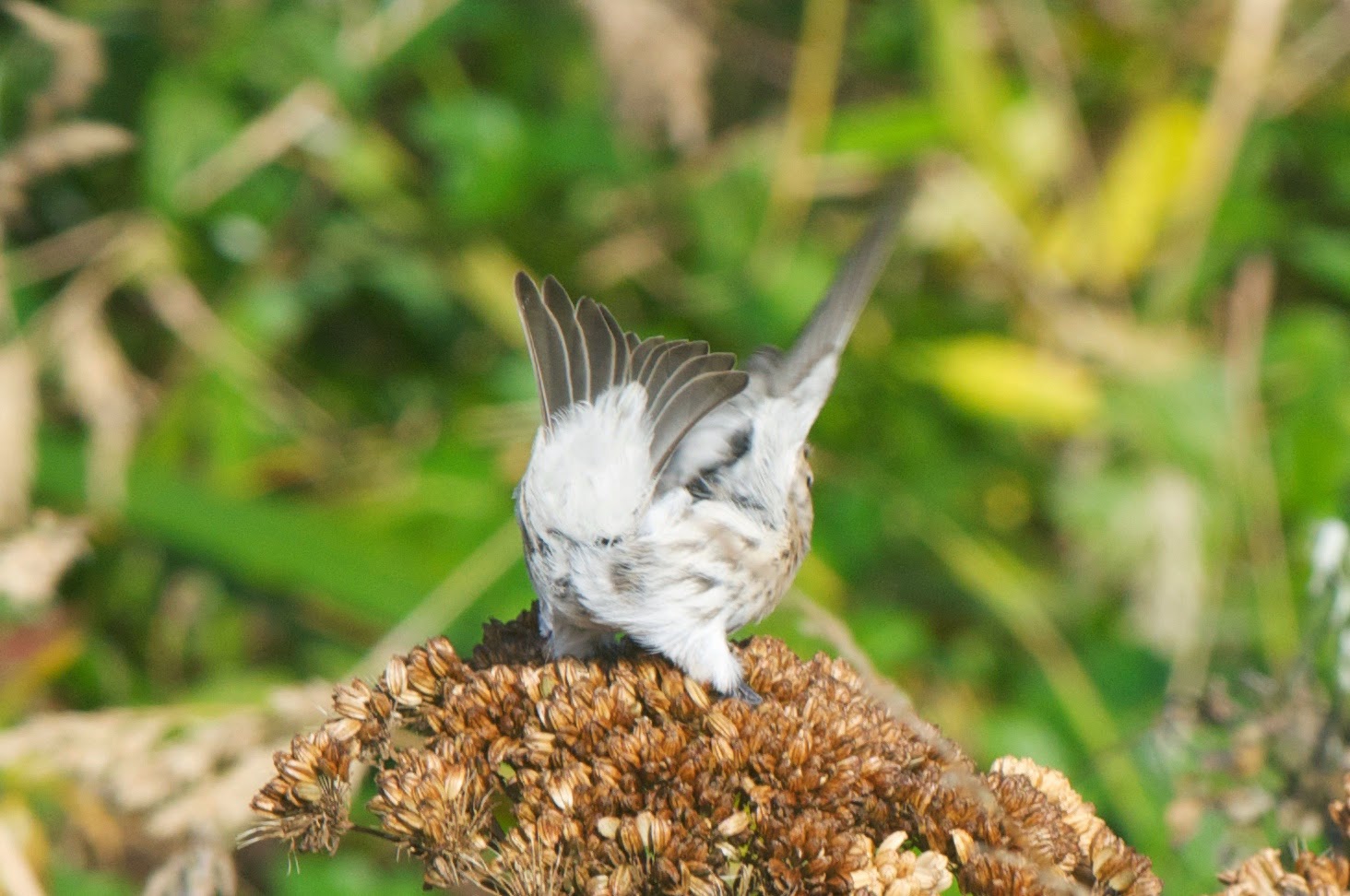 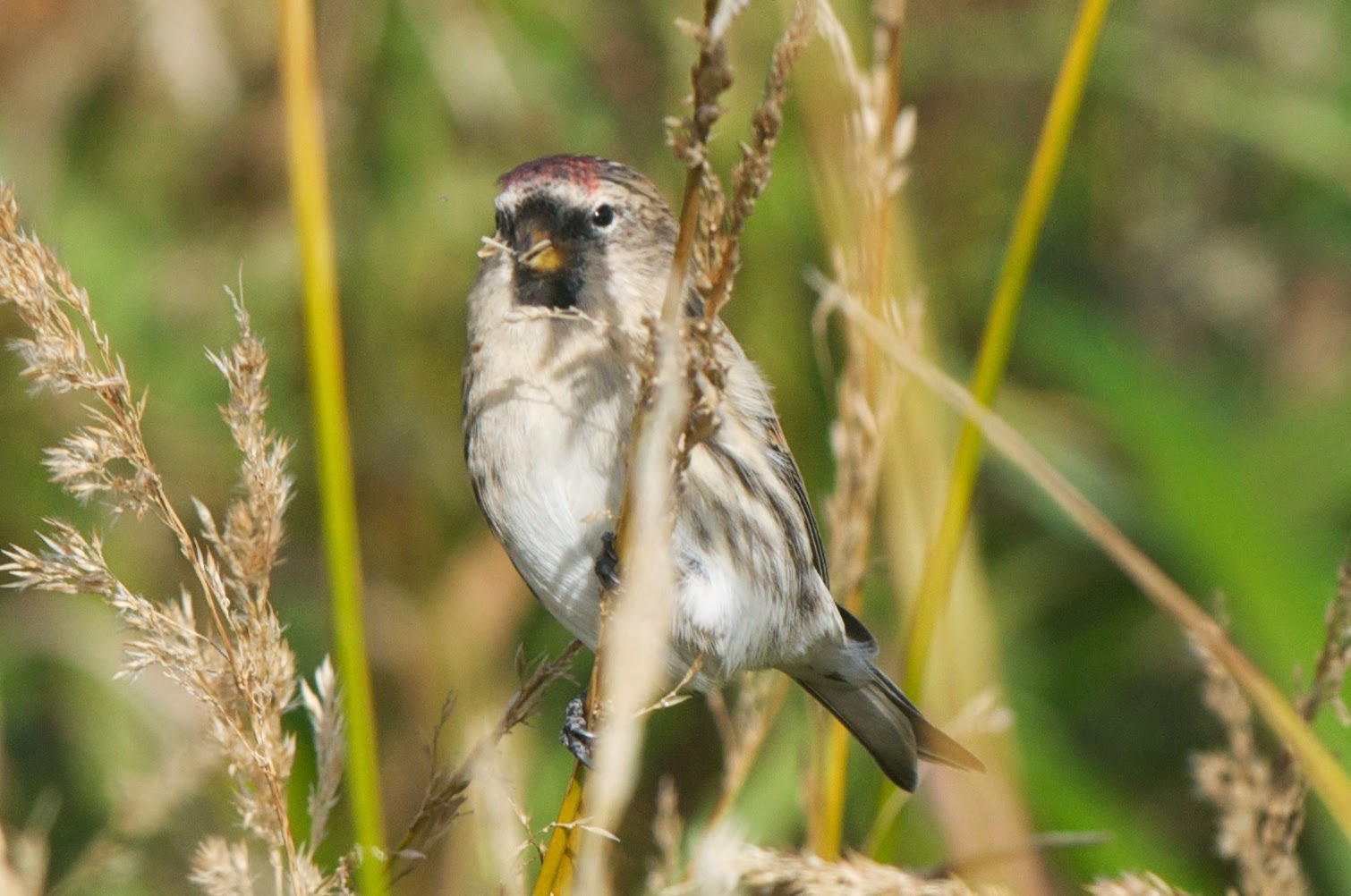 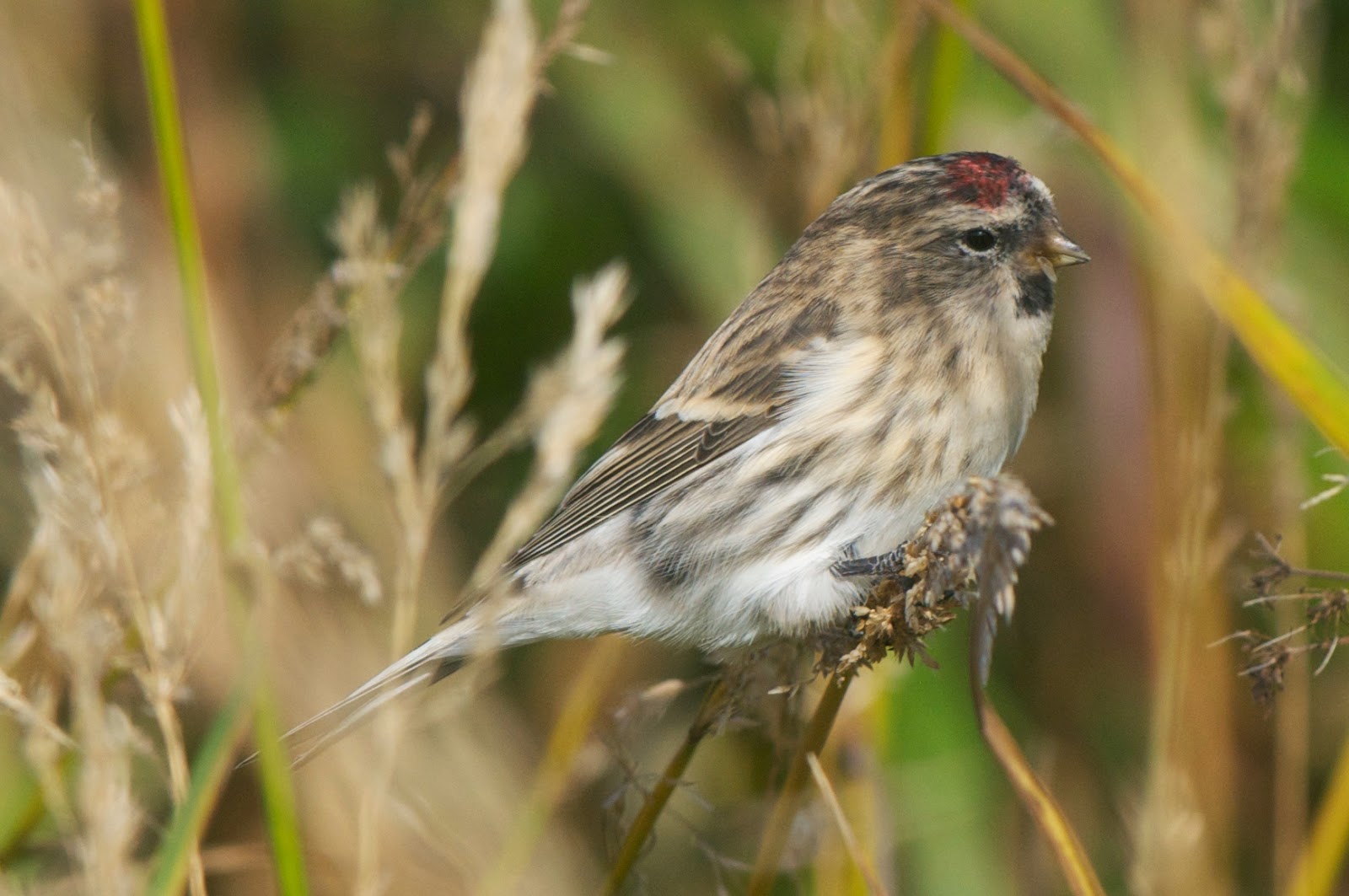 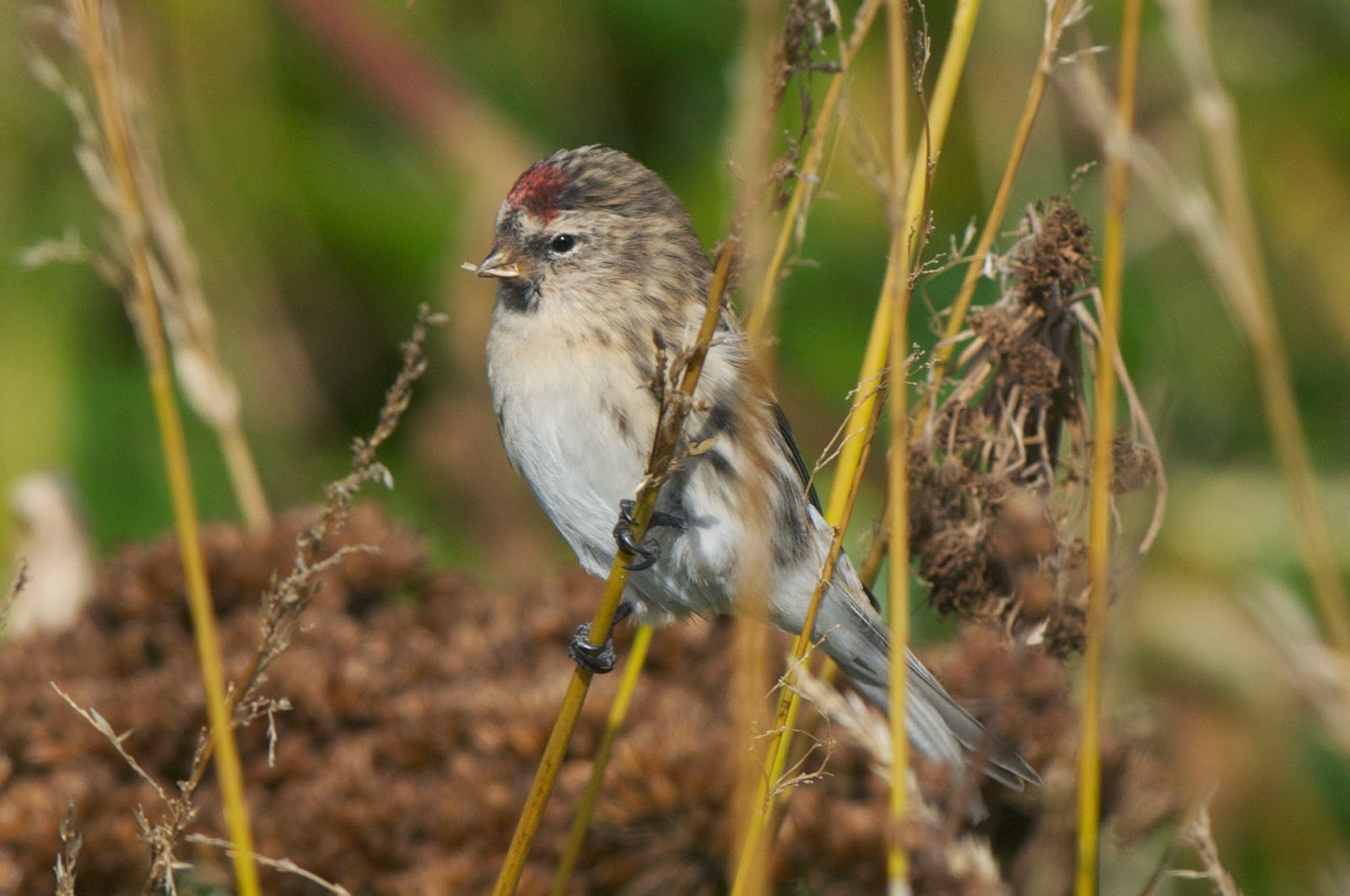 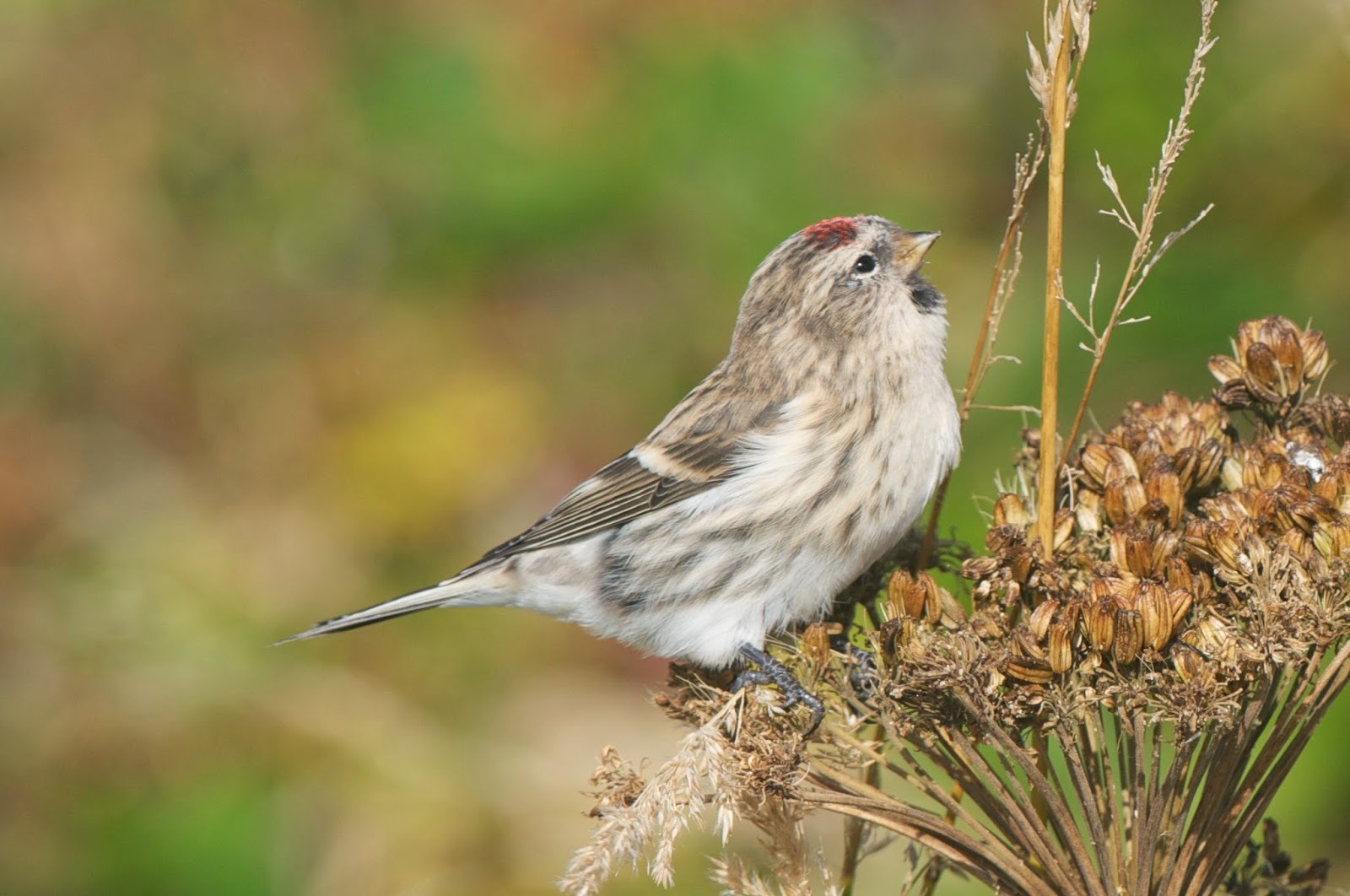 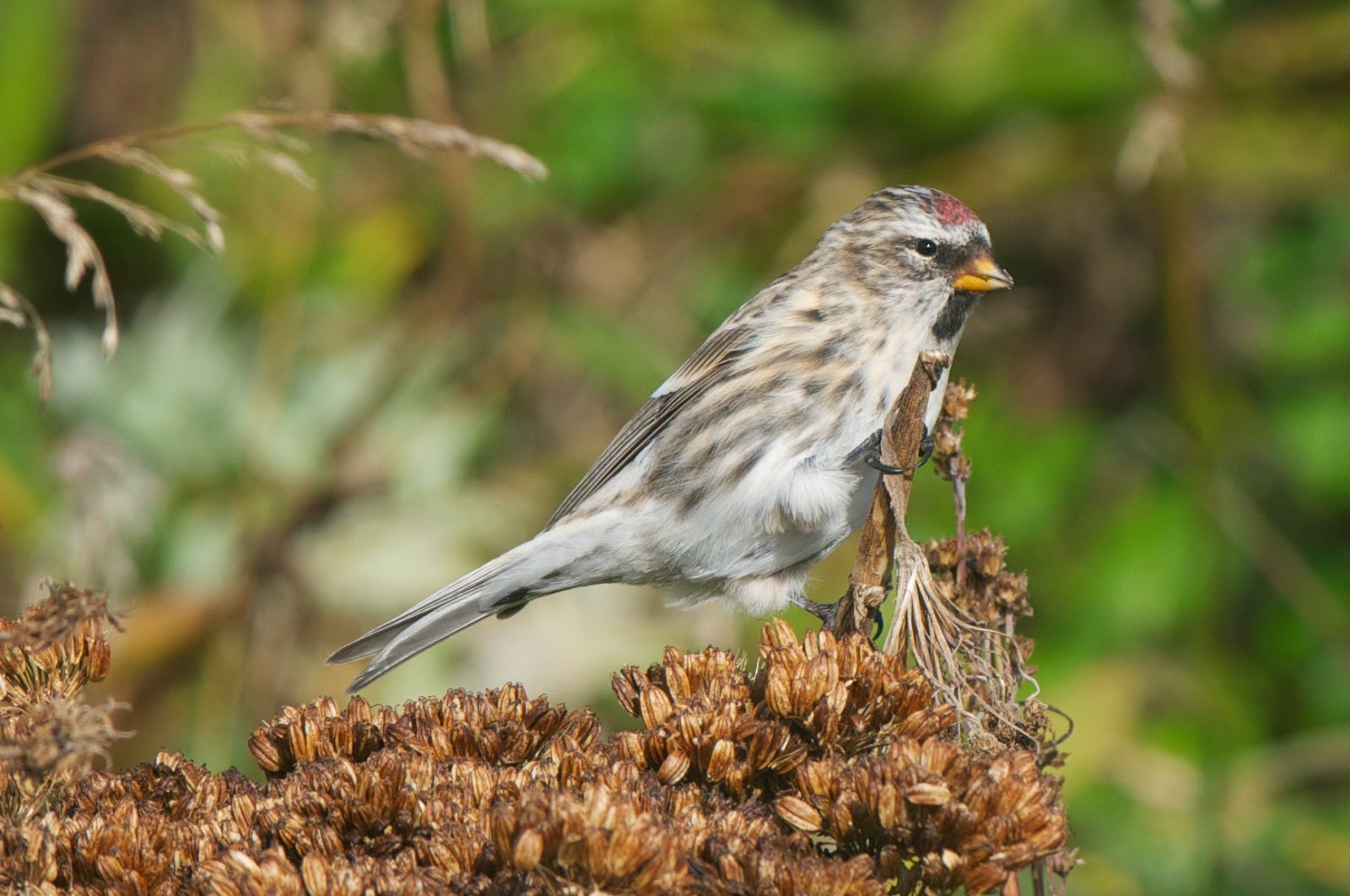