Finally, I have other things to blame for not getting a timely blog post written!  Usually it’s just my indolence but this time I get to point to our internet problems (half the town lost their internet for a while) and the fact that I’ve actually been working.  Yes, when one of these anchors offshore, better brace yourself: 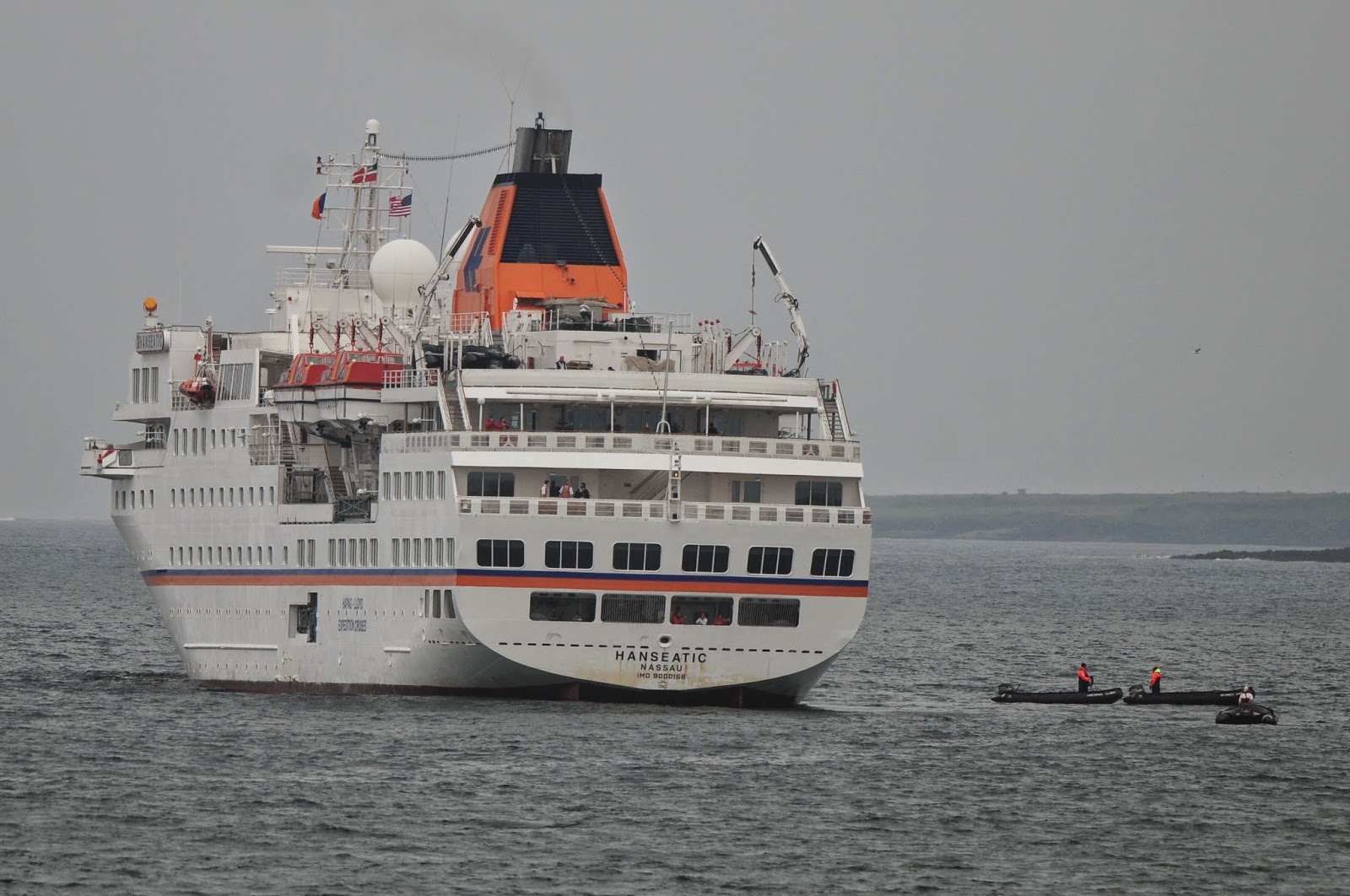 So yes, we occasionally get cruise ships that unload 100-300 people on our shores leaving us to transport them, show them the bird cliffs, the church, etc.  Sometimes they speak English, sometimes they don’t.  I’ve grown accustomed to standing next to my scope with my finger pointing to my open Sibley Guide while Germans line up to see their first puffin.   Good times!  Oh yeah, puffins, here’s one: 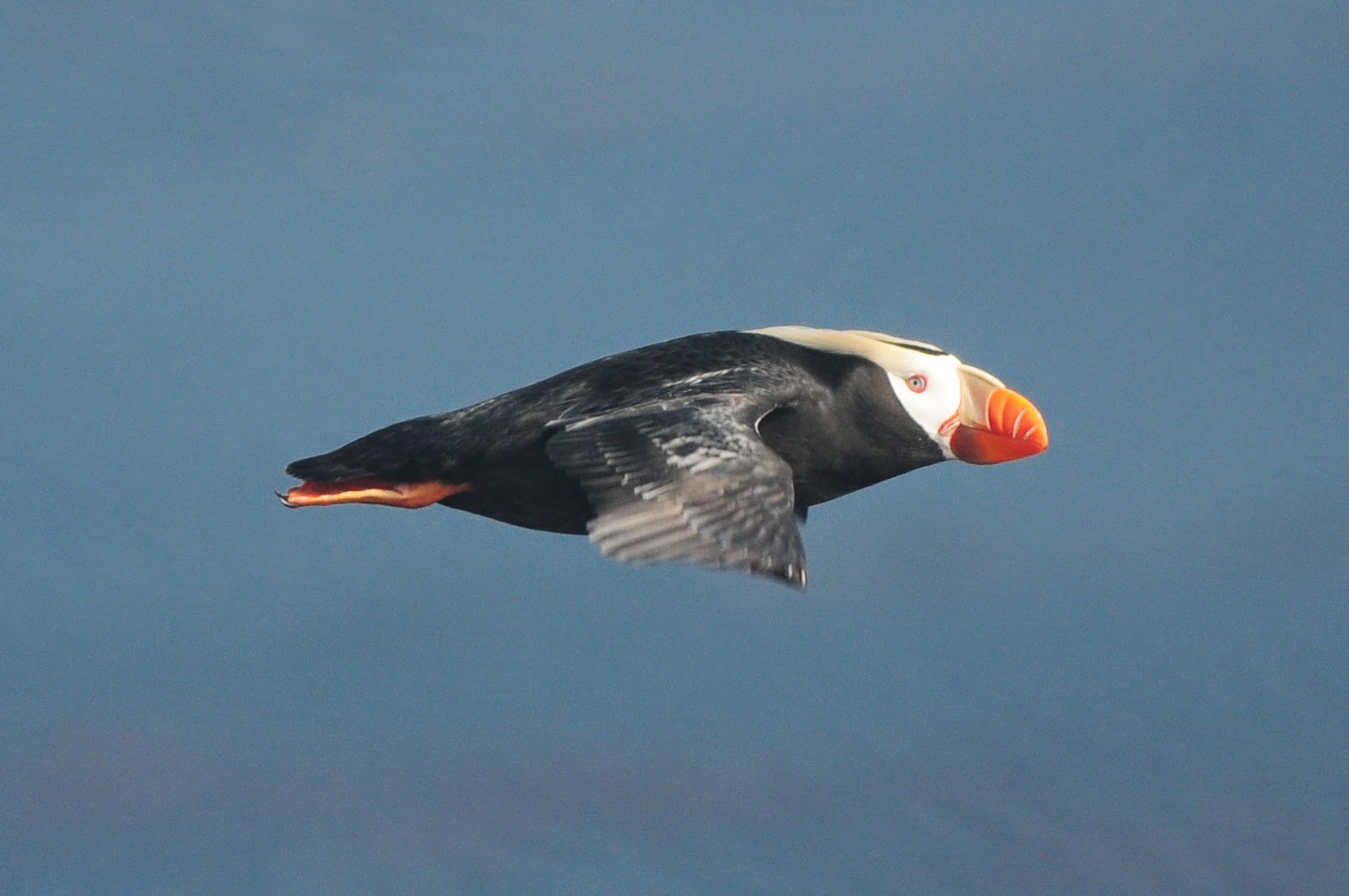 While we’re on the subject of boats though, this pollock processor ship pulled next to shore for a few minutes the other morning: 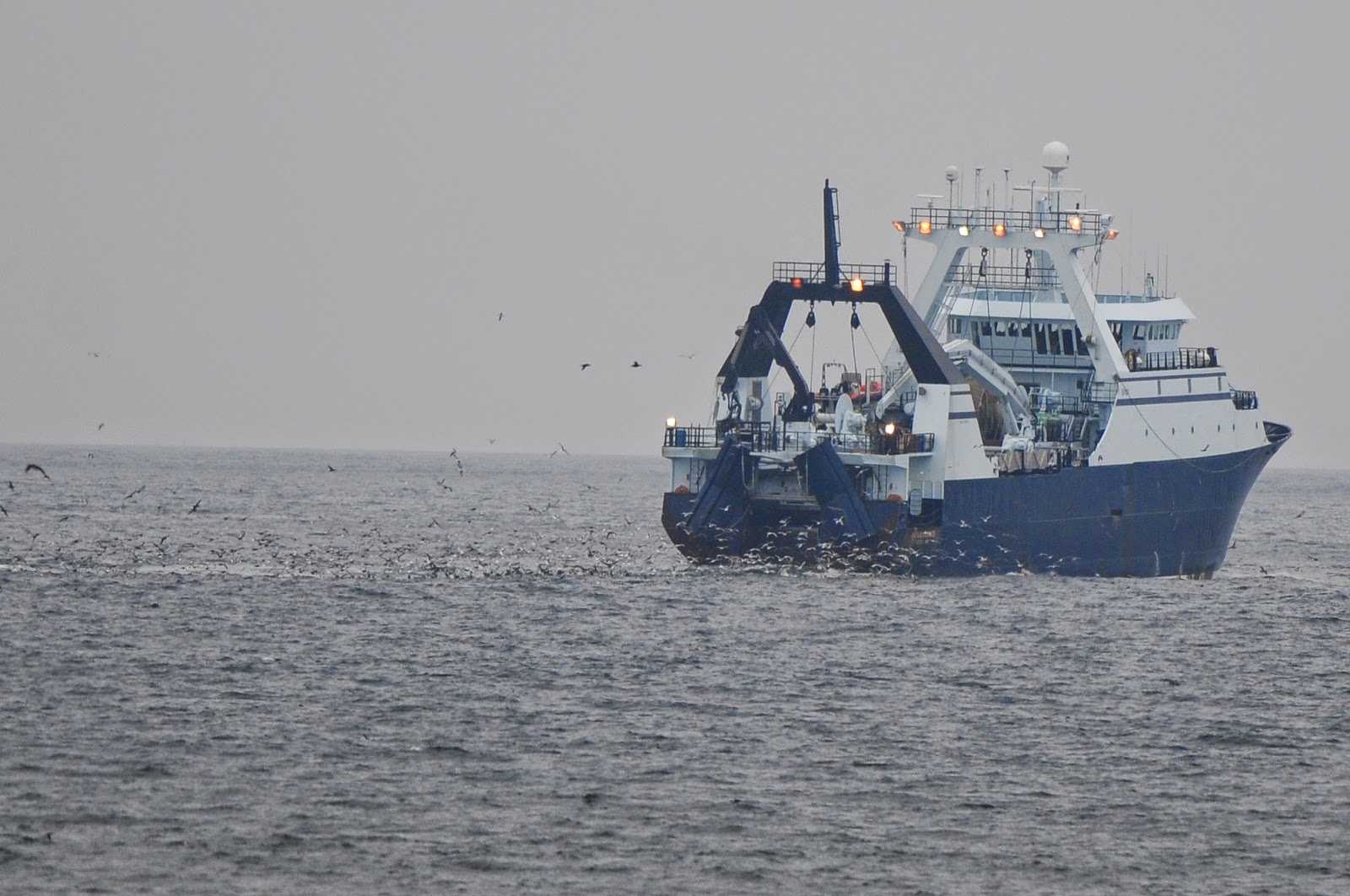 Apparently they were unloading an injured worker before heading back out to sea.  In the meantime, they were dumping offal which was attracting a crapload of NORTHERN FULMARS… as in thousands.  We scanned for an albatross or anything else goofy but the best I could do were a couple of SHORT-TAILED SHEARWATERS and my first (and long overdue) island POMARINE JAEGER.  Here are a few fulmars though (pretty much every bird you see is a fulmar): 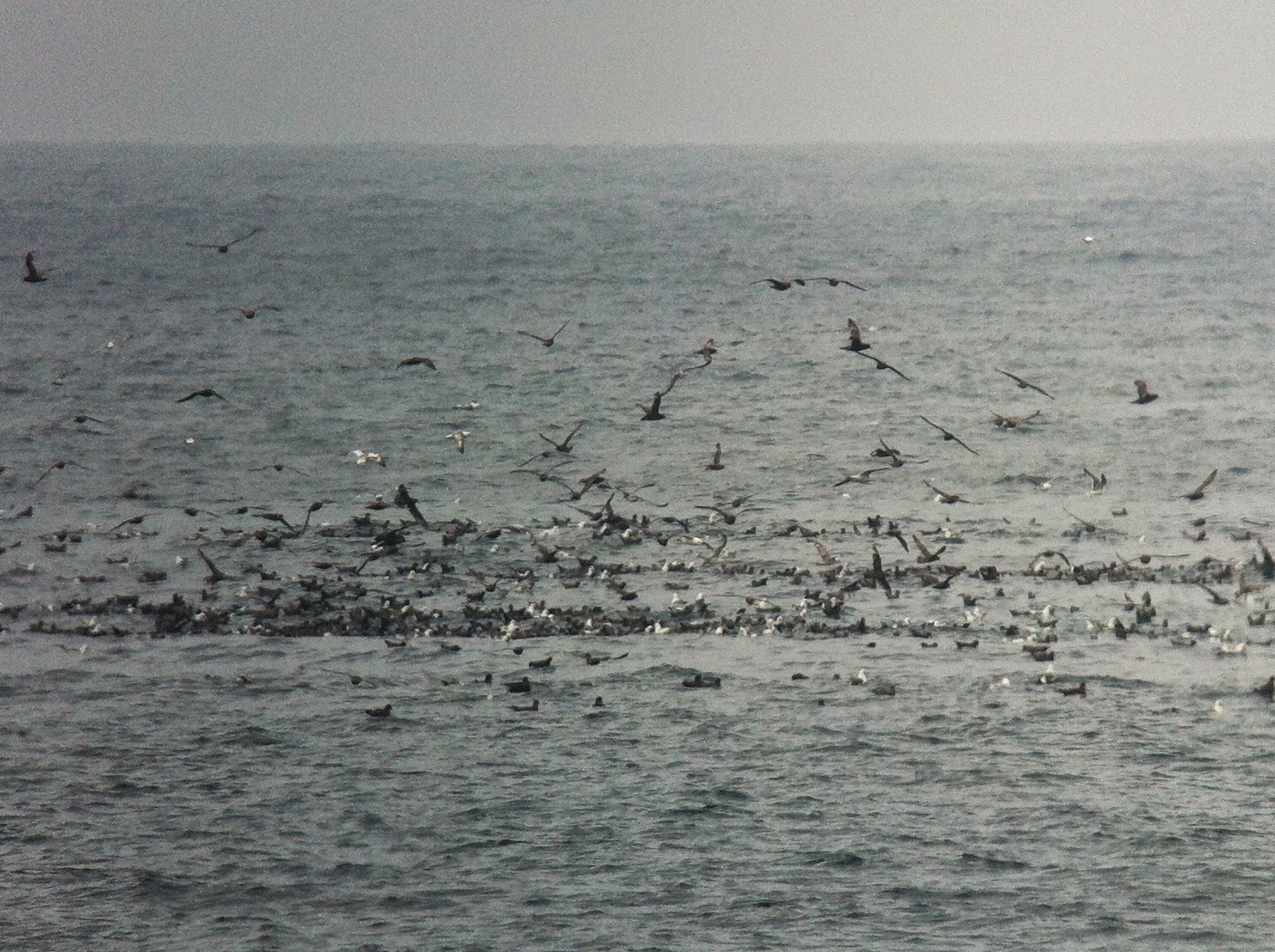 I would be remiss if I didn’t mention that I… drum roll… got to shave again already!  Yes, I managed to snag another new ABA bird just a few days ago.  I found myself at Southwest Point and although it was completely socked in with fog, we had a northwest wind at about 15 mph.  I patiently waited and sure enough, the fog started to recede for a bit.  There was a light stream of NORTHERN FULMARS passing by north to south, perhaps about 1000… and that’s when the MOTTLED PETREL flew by.  After scanning through so many fulmars and shearwaters during the past 2-3 months, a bold pterodroma petrel flying by was nothing short of a refreshing slap to the face.  It was a truly striking bird and one that I’d desperately hoped for during my gig here.  I seawatched for another couple of hours hoping for more… and although I was granted one more Mottled, that was about it.

Lots of the visitors spend time watching the NORTHERN FUR SEALS from the seal blinds that we have on the island.  Although the colonies are usually pretty noisy, sometimes the seals look completely dead.  For example, here’s a male (left), female (lower right), and pup (middle) that look entirely exhausted: 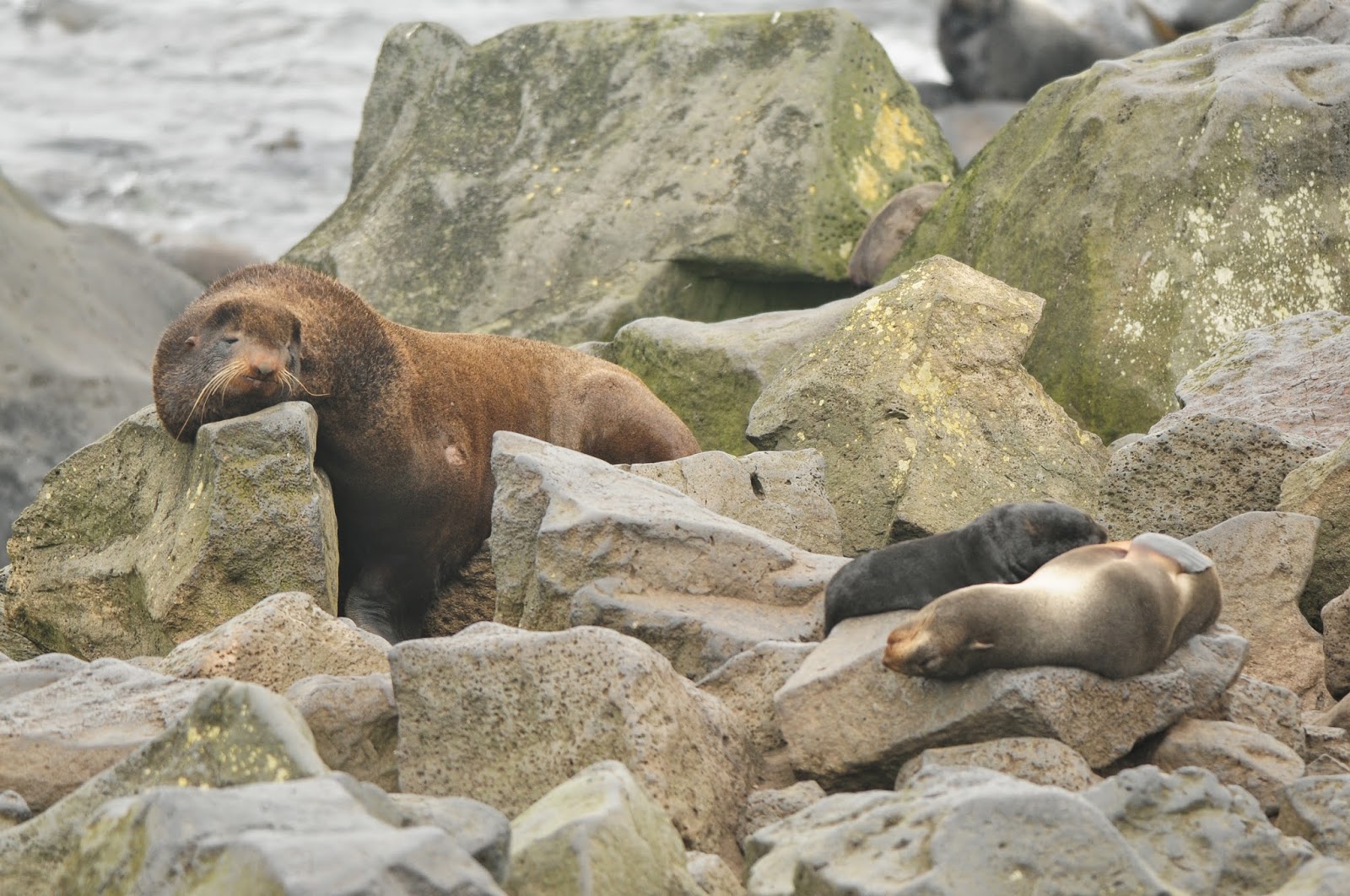 Sometimes the seals are somewhat close to the blind.  As in…. 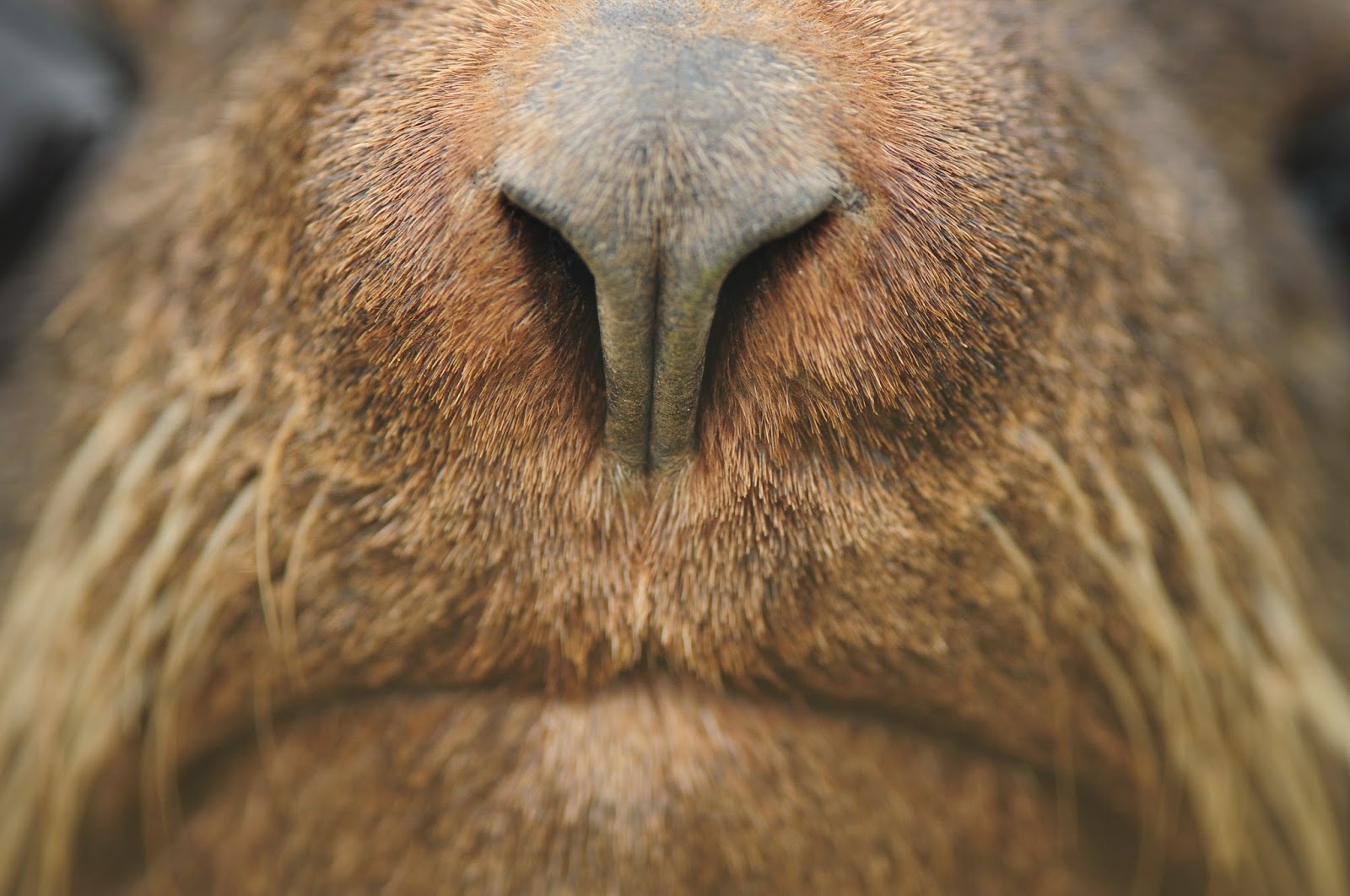 The weather has remained quite lethargic lately; we've had no storms and certainly no strong winds to speak of.  However, we still have seen a few migrant shorebirds coming/going.  One such bird was yet another adult RED-NECKED STINT on Pumphouse Lake that stayed for 2 days.  This is already our 4th adult RNST of the year and we haven’t even hit the season for the more-numerous juveniles. 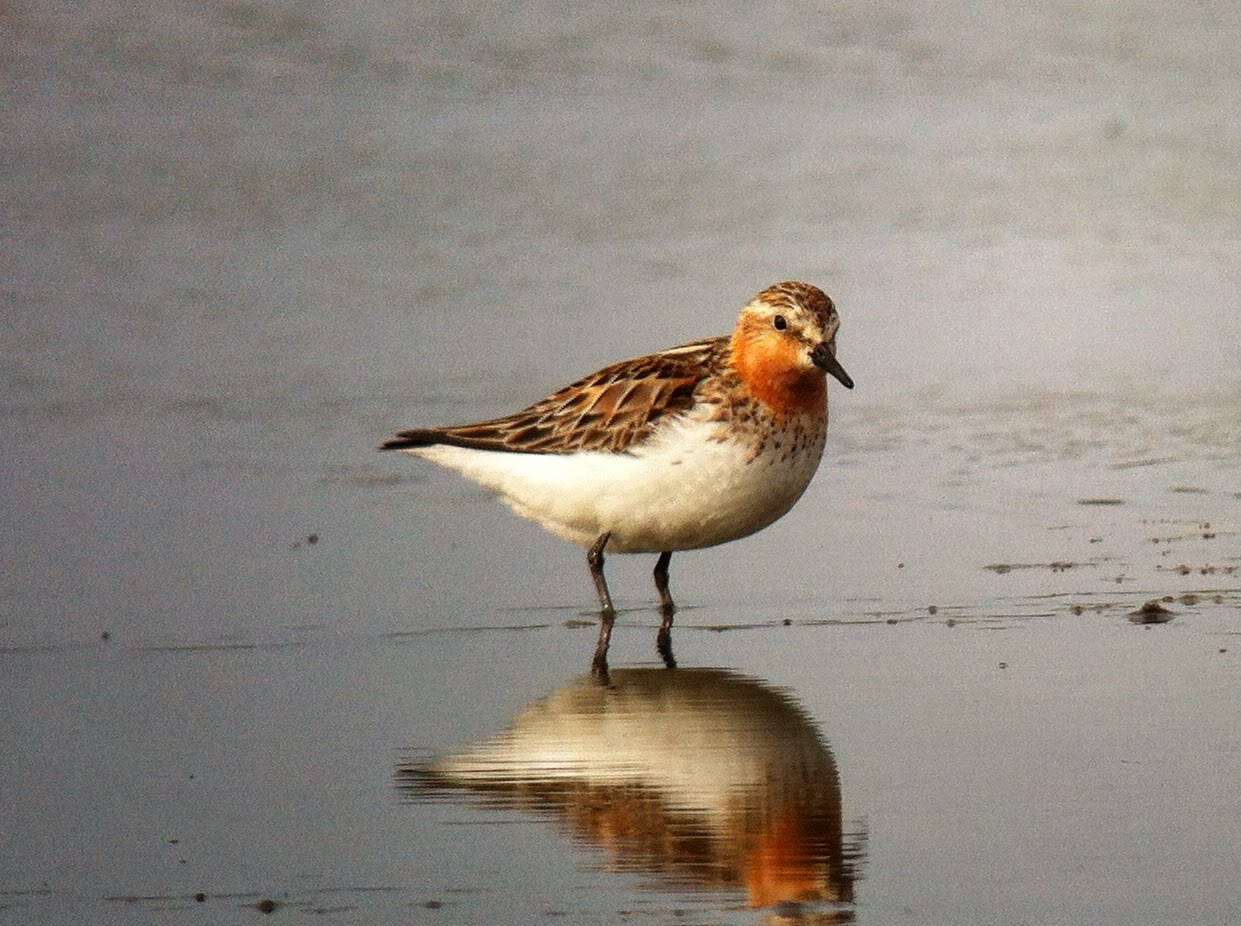 Tis the time for tattlers too.  Having not spent a ton of time around Gray-tailed, I’ve been studying various field marks on Wanderings.  For example, this photo is plenty good enough to clinch an ID of WANDERING TATTLER if you know what you’re looking at (for starters, focus on where the eyelines meet; maybe someday I’ll be able to post a helpful comparison which will then give meaning to what I'm showing): 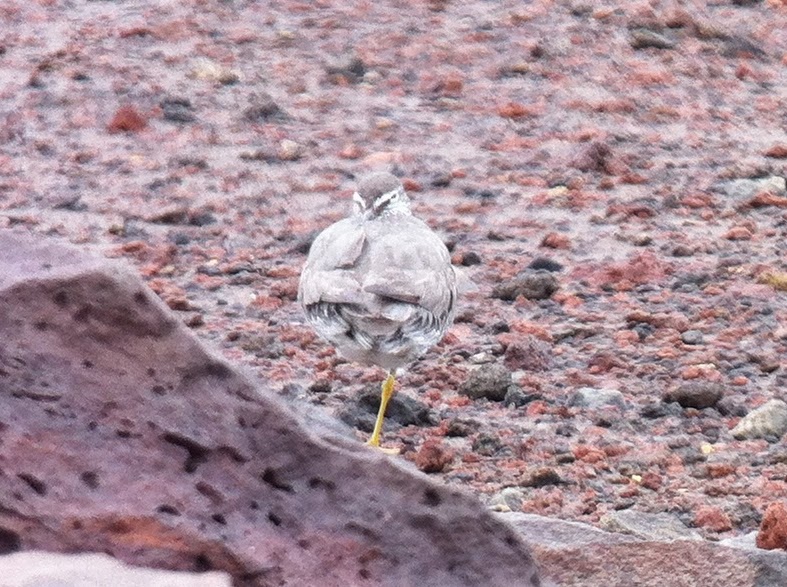 Many species are starting to molt out of their high-breeding plumages (I’ve seen basic-plumaged Tufted Puffins and molting Pigeon Guillemots already).  Even the gaudy RED-FACED CORMORANTS aren’t as jaw-dropping anymore.  Here’s an adult but you’ll notice the reduced white on the flanks and the lack of the two tufts on the head: 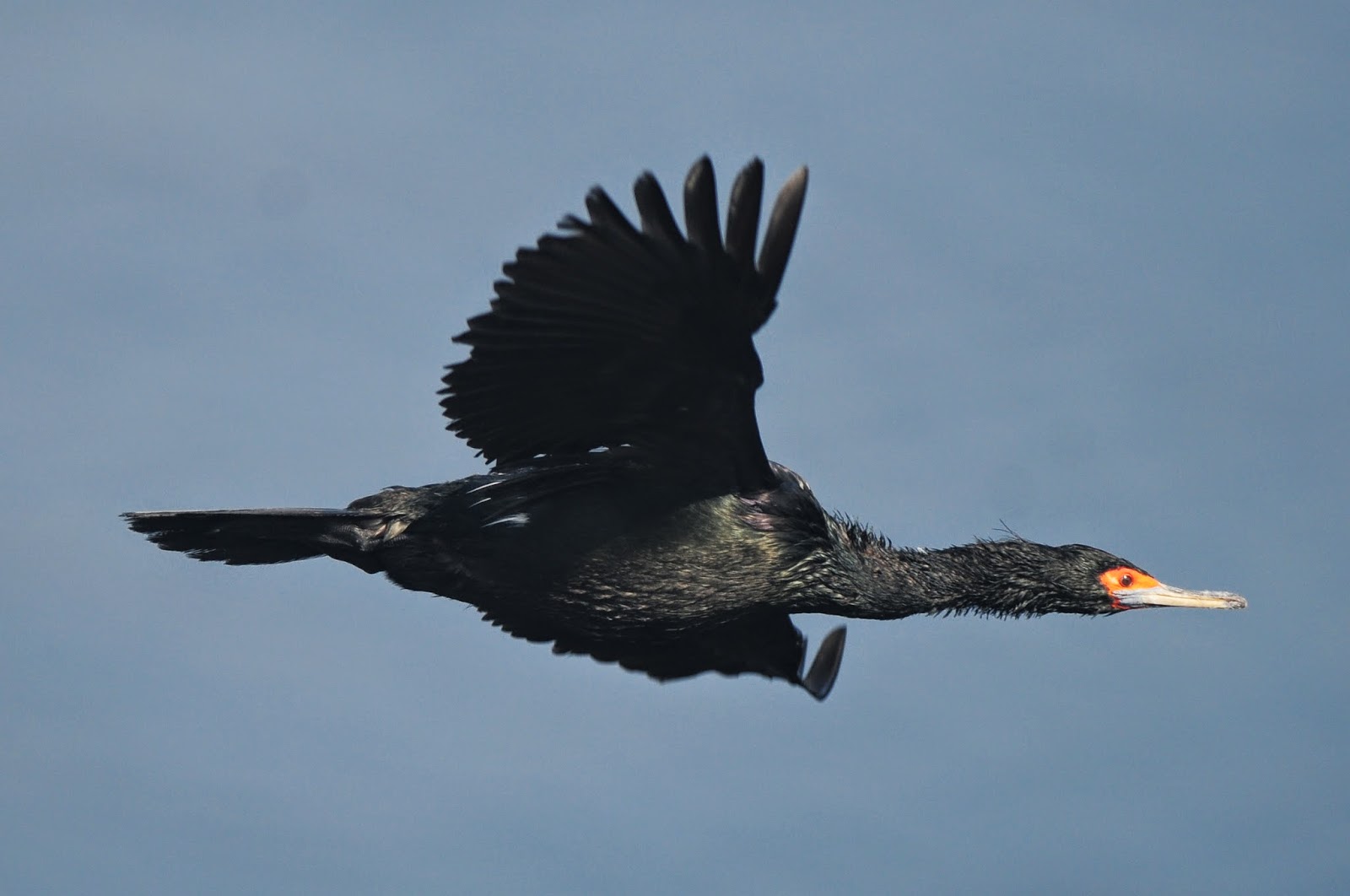 Some cormorants were never that gaudy to begin with this year.  Here’s a youngster which, although reduced in color, is still striking when you can see the blue coming in under the bill: 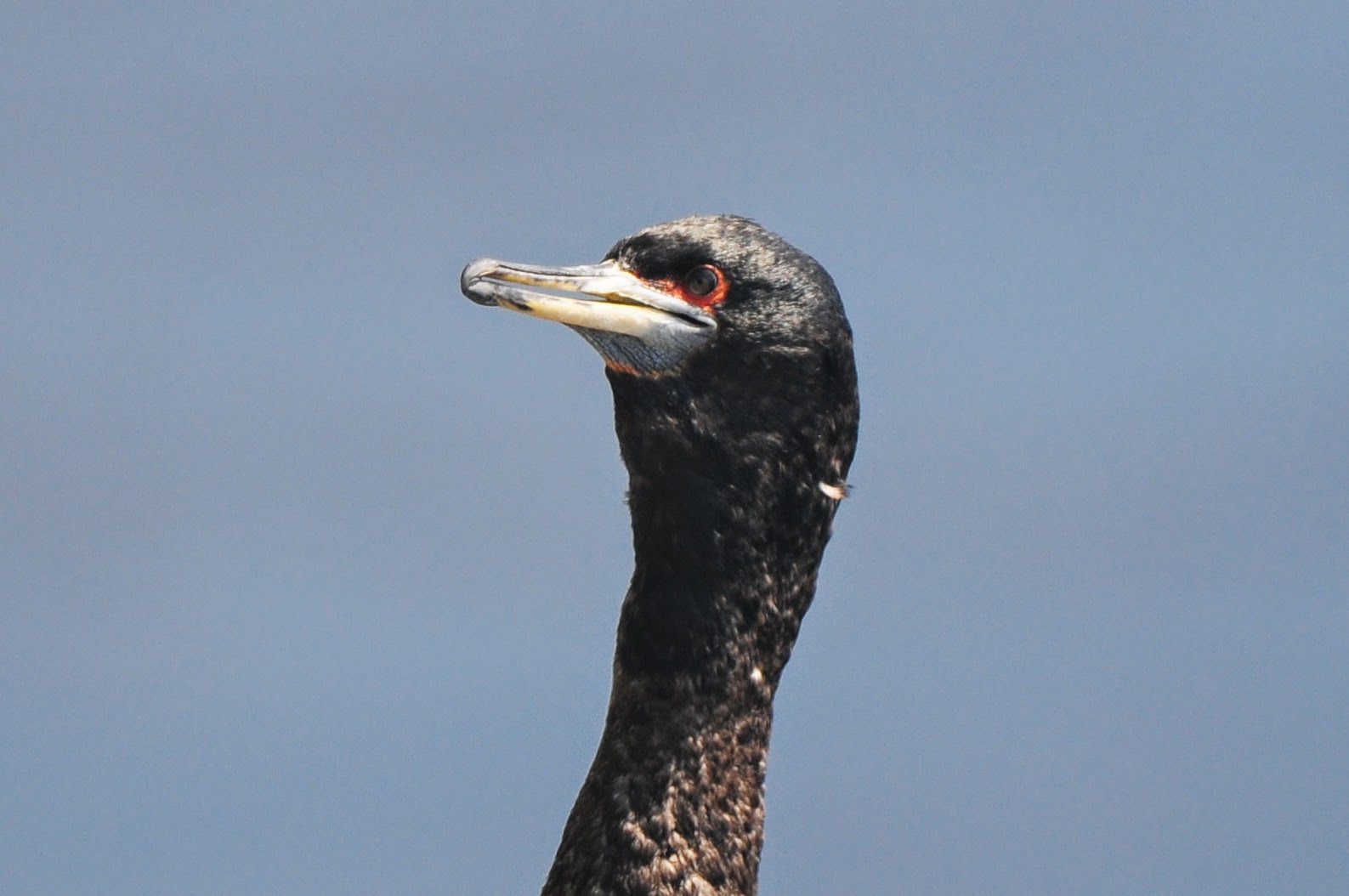 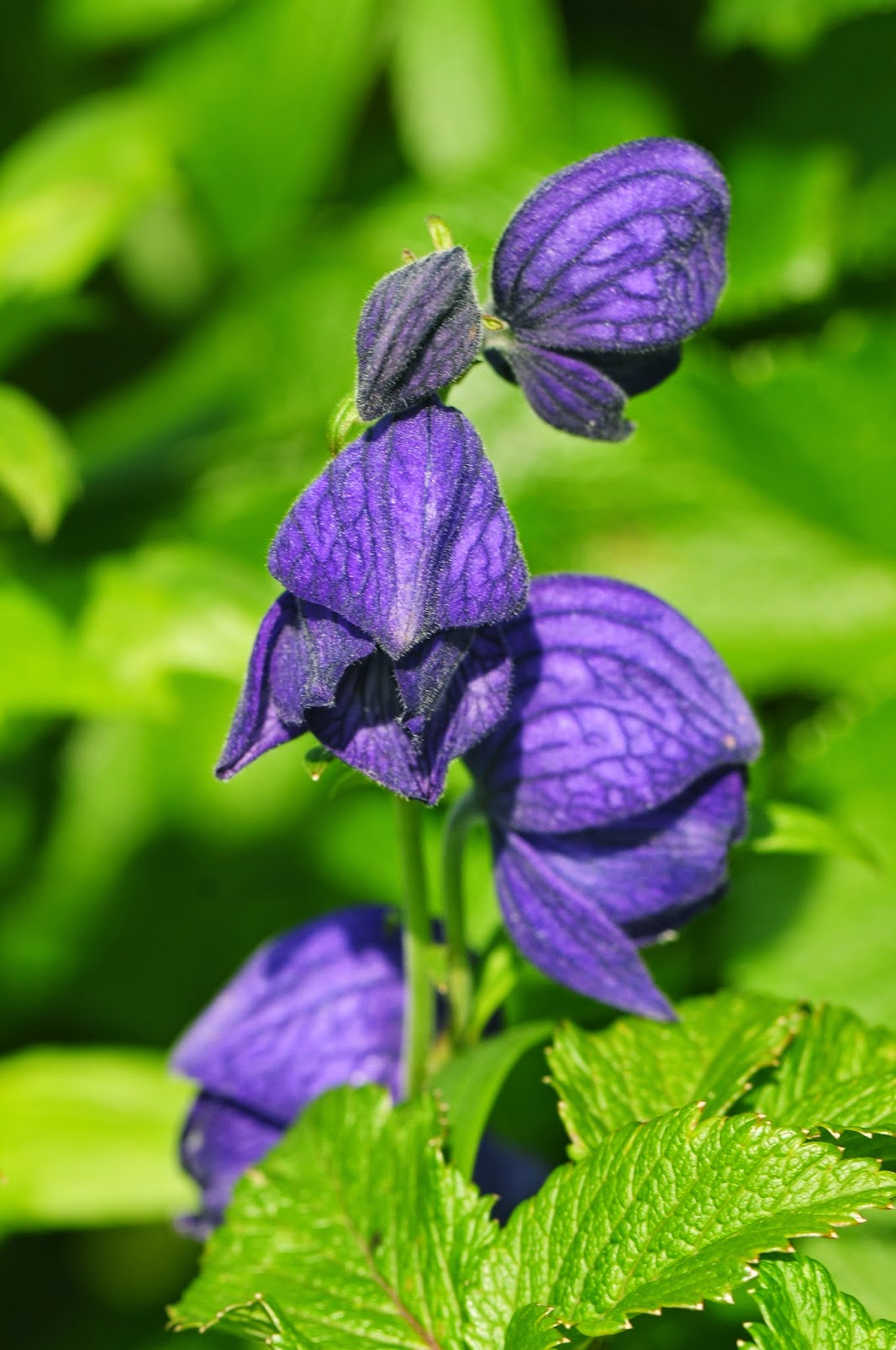 Currently, this flower is one of the most noticeable blooming plants on the island.  As you can see, their deep purple color goes quite nicely with the deep greens.  But hold up... there are other names for this flower such as Wolf's Bane, Leopard's Bane, and Devil's Helmet.  You see, this flower is deadly poisonous.  Historically, the toxins extracted from this plant were used to kill wolves, hence the name Wolf's Bane.  In fact, people all around the world have used these plants for centuries for the potent poison; tribes poisoned their arrows and spears for hunting animals (ibex, tigers, foxes, bears, etc).  The Chinese, well, they even used it in warfare to poison an enemies' water supply.  Witches smeared Monkshood on their broomsticks and bodies, drank a dram of the herb belladonna and went "flying".

The native Aleuts here in western Alaska knew of this poison too and called this plant Anisnaadam Ulax (or "Bumblebee's House").  To ensure children would stay away from it, mothers would warn the children that if they touched the flower, a bumblebee would come out and sting them.  The native Aleuts would also tip their lances with Monkshood for whale hunting.  Typically, one hunter in a kayak would stalk the whale and once lanced, the whale would become paralyzed and would drown.

You should wear gloves to touch any part of the plant (whoops).  If you take in large doses, they say death is almost instantaneous.  On that note, I'll leave you with some cut-and-pasted cultural references from Wikipedia: