It’s been a busy couple of days here on St. Paul, so much so that I promptly lost my voice completely yesterday.  Fail.  That doesn't stop me from typing though... pretty much the only form of communication I'm capable of at the moment.

RED-FACED CORMORANTS are understandably one of the targets of many visiting birders (within North America, this is an Alaska-only specialty).  The other day, there were several quite close to us on the cliffs at Reef Point including this sharp adult taking a peek at us from behind a grass clump: 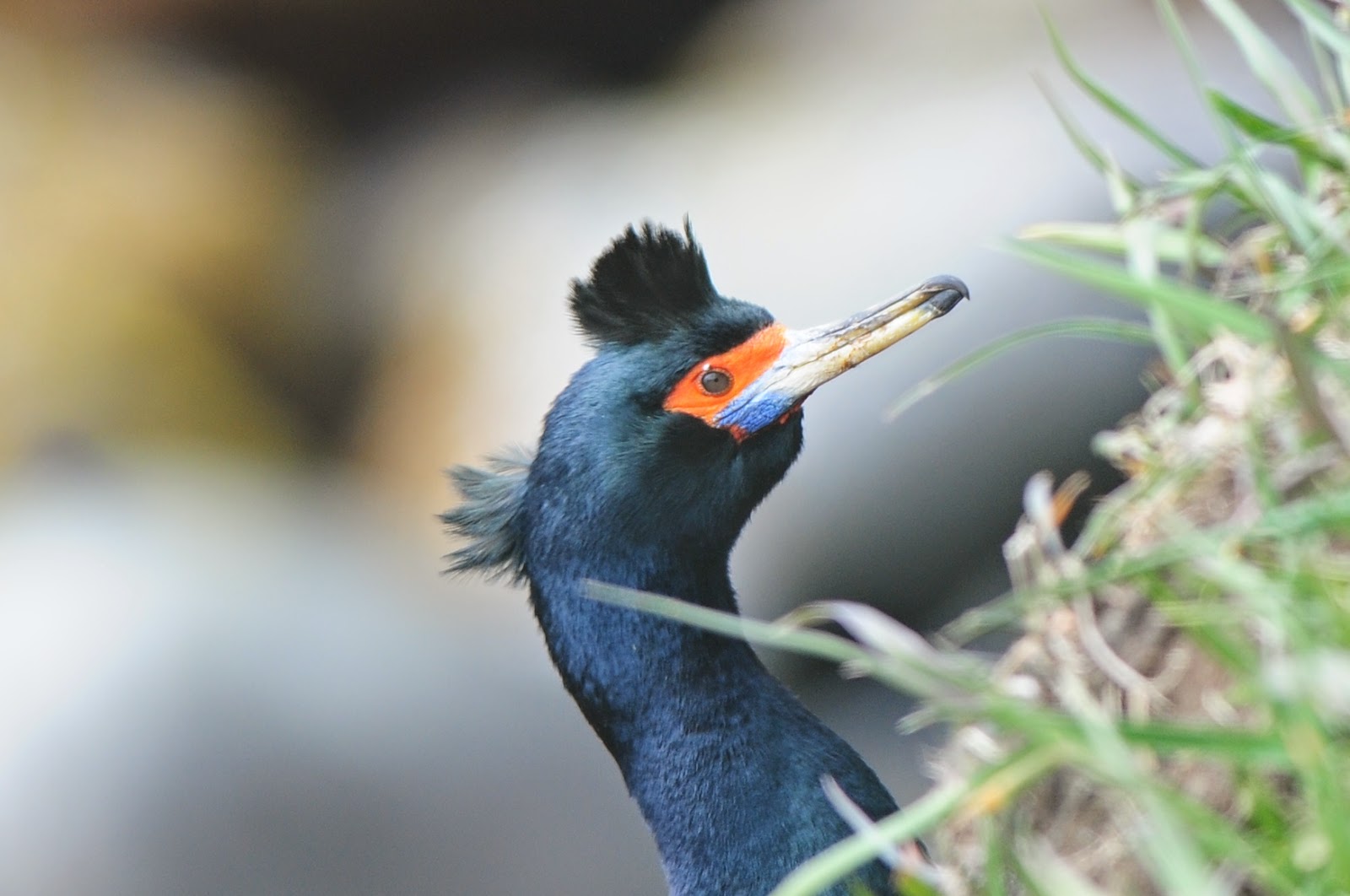 Yes, I know what you're thinking... the crazy tufts ARE actually normal on this species.  Another popular cliff-nester is the LEAST AUKLET, the smallest alcid in the world.  The views you can get of these tiny guys at Ridge Wall are stunning: 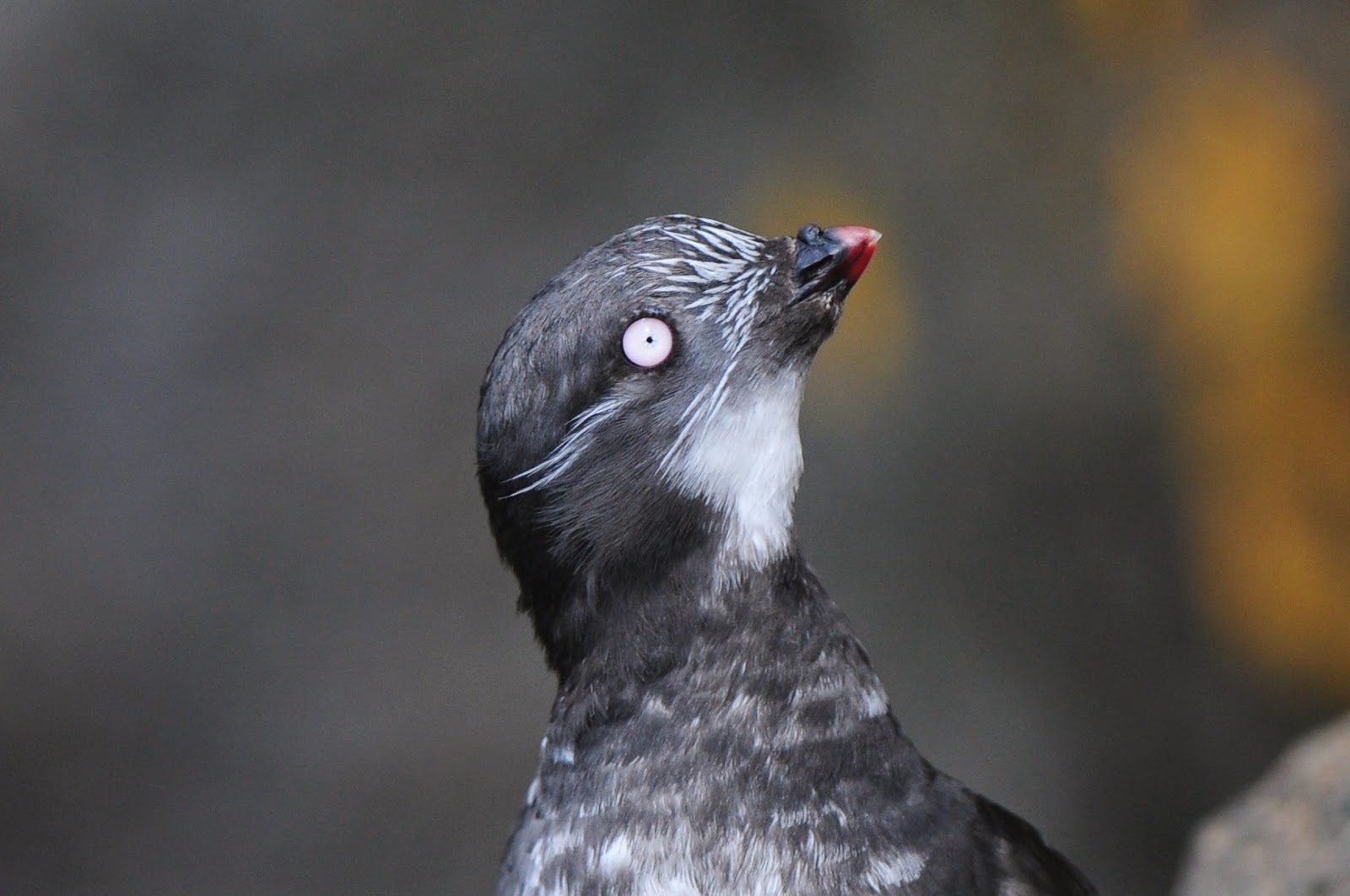 Town Marsh, a very popular spot for shorebirds and birders hoping for shorebirds, was fairly quiet on my last visit.  This SEMIPALMATED PLOVER didn’t seem to mind me stomping around though: 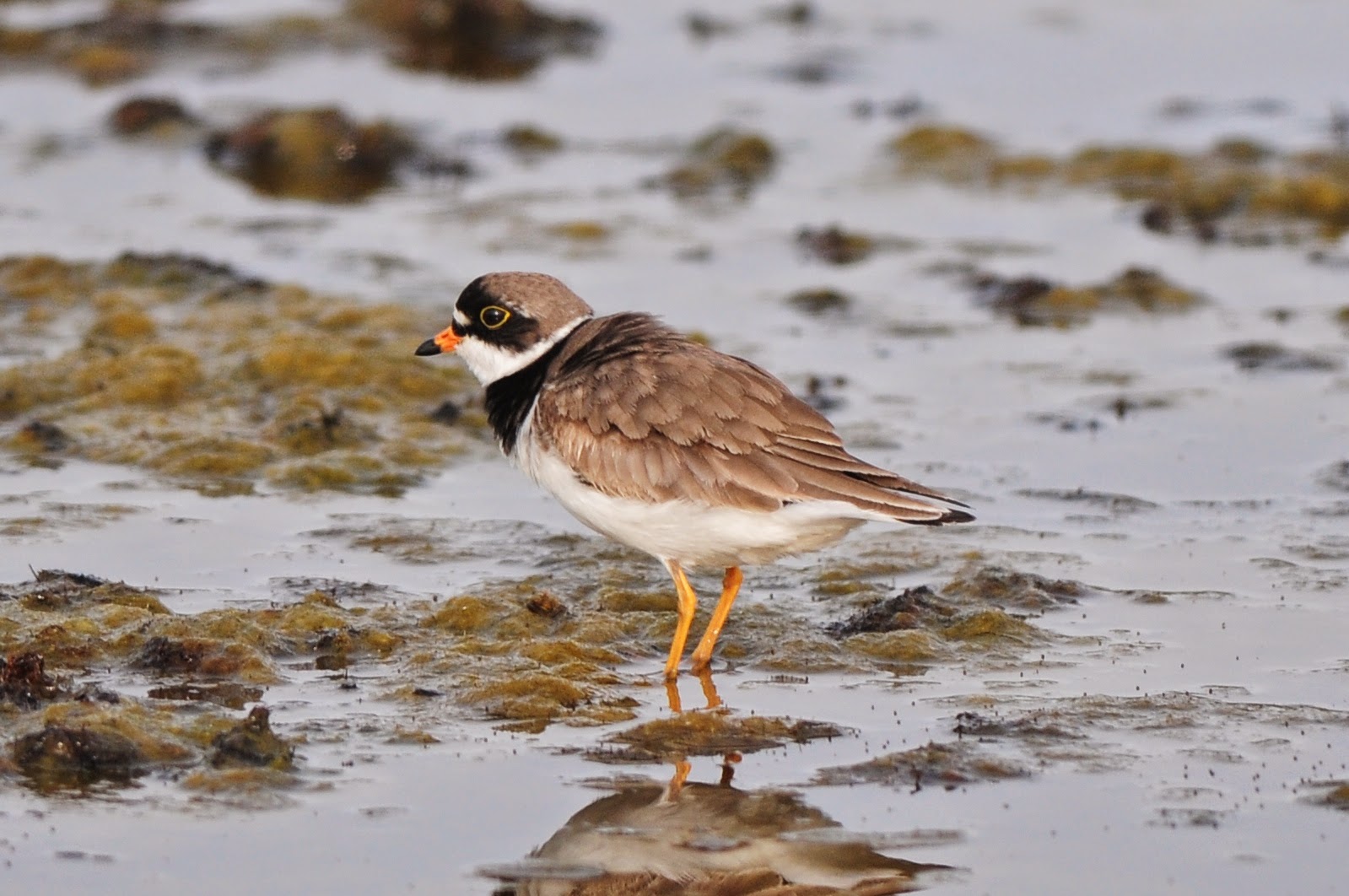 Another abundant shorebird at Town Marsh is the RED-NECKED PHALAROPE.  Of all the shorebirds in the world, I'd argue that phalaropes are the most comfortable swimming on water.  Here’s one in flight however: 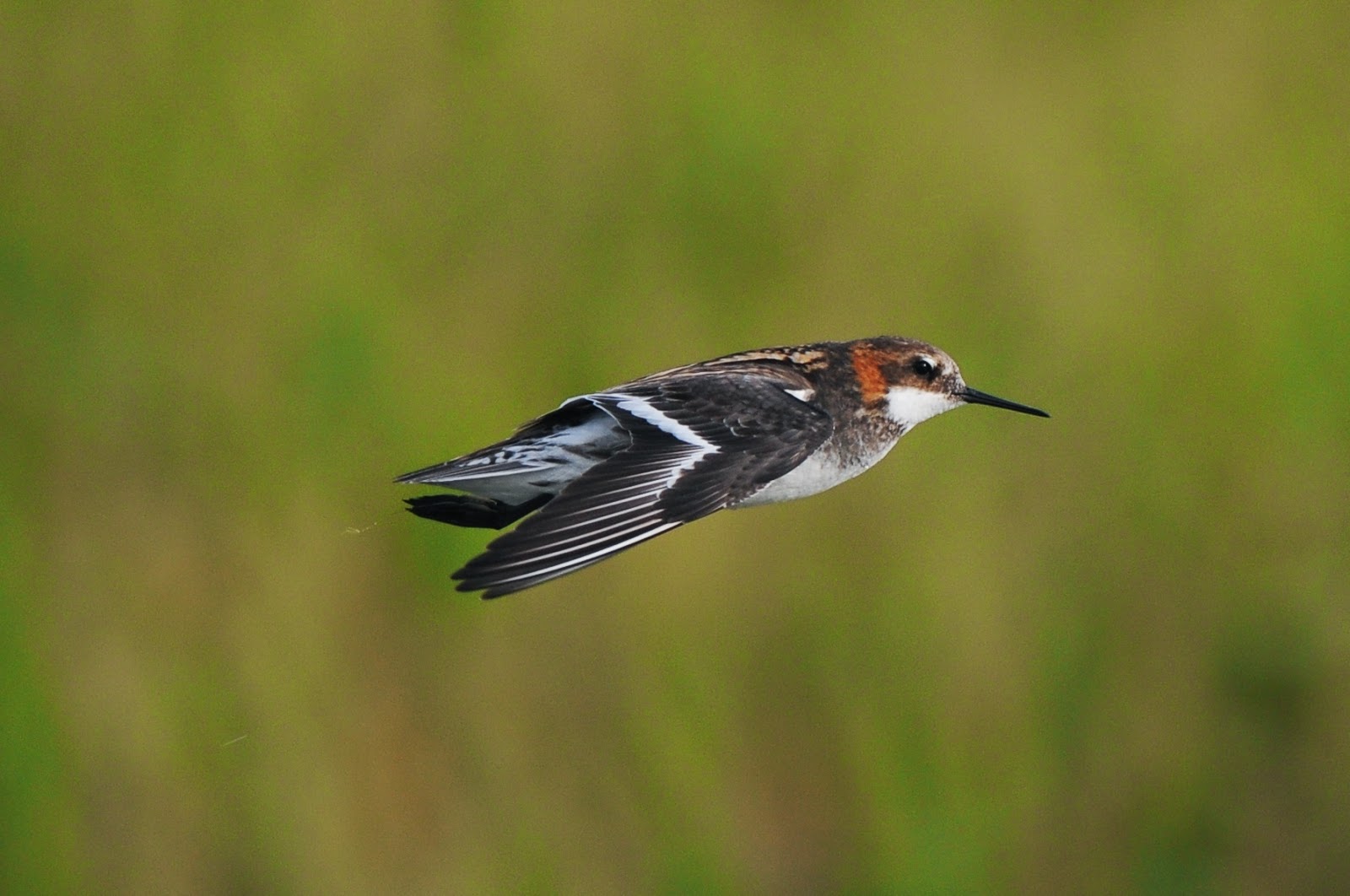 I may have mentioned this before but the GRAY-CROWNED ROSY-FINCHES here fill some interesting niches.  For example, they nest all over town in any kind of cavity they can find.  In fact, and it’s noted quite frequently, these behave like House Sparrows.  They’re abundant, nest all over the place, and they even can sound quite similar to House Sparrows.  Either way, they’re still pretty cool to have around: 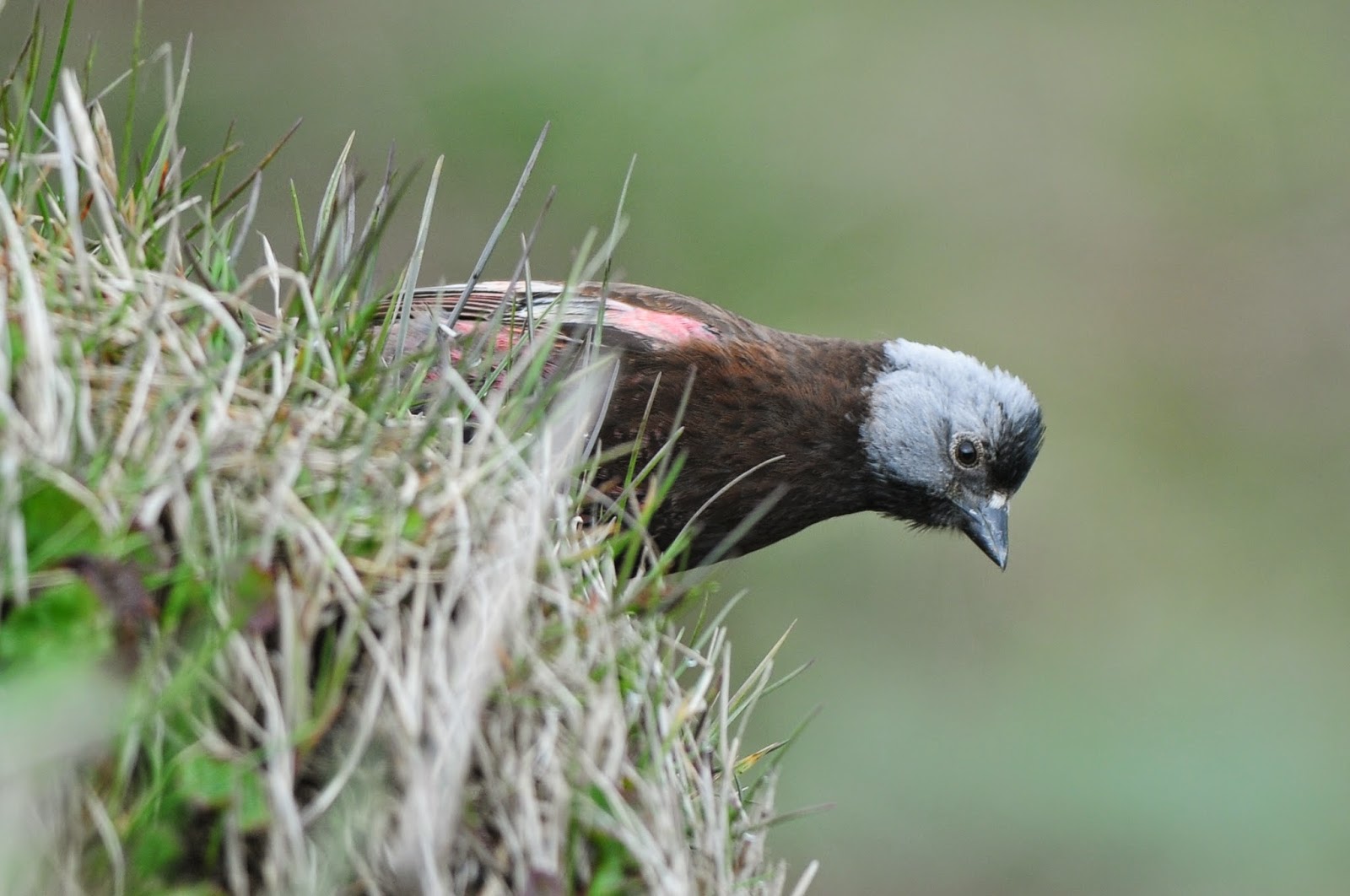 The other day we flushed a small, dark warbler-like thing from a roadside up near Novastoshna.  All the glimpses in flight we were getting told us that this was certainly something interesting.  It took probably an hour to track it down for real and once we did, we didn’t find a Dusky Warbler or any Asian vagrant… but a NORTHERN WATERTHRUSH instead.  Huh.  Heck of a bird for up here though.  Here’s a terrible picture of it in flight before we knew what it was: 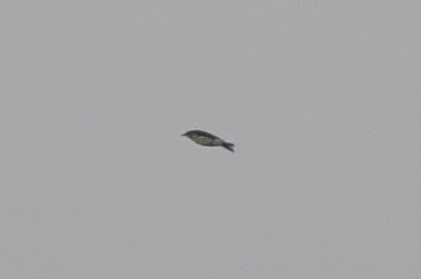 Pumphouse Lake has some of the best shorebird habitat on the island right now.  I was scanning through shorbs the other day when this beasty walked into view: 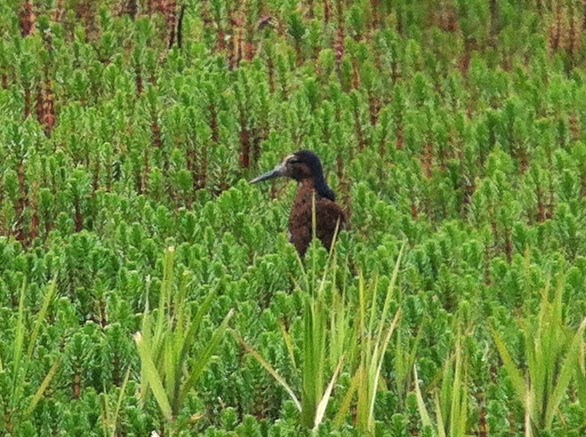 Antone Slough provided me with one of the neatest subspecies comparison photos I’ve taken.  The front bird is a minima CACKLING GOOSE and the back one is an “Aleutian” CACKLING GOOSE.  Note the difference in overall size, bill size, and forehead angle: 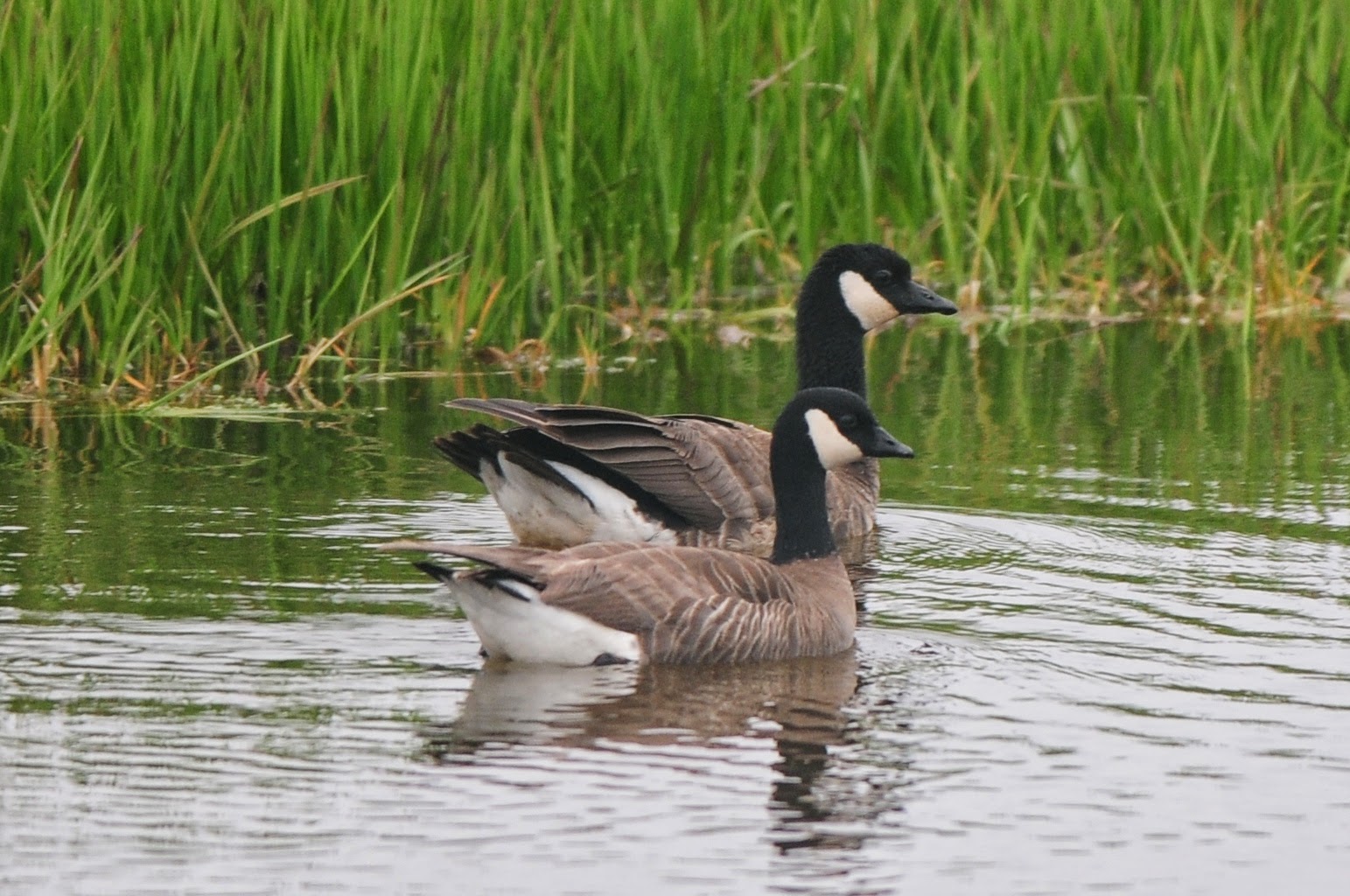 Oh, and yes, the ORIENTAL CUCKOO is still around (it’s been here for almost 2 weeks now).  I managed this shot the other day of the diagnostic buffy undertail coverts: 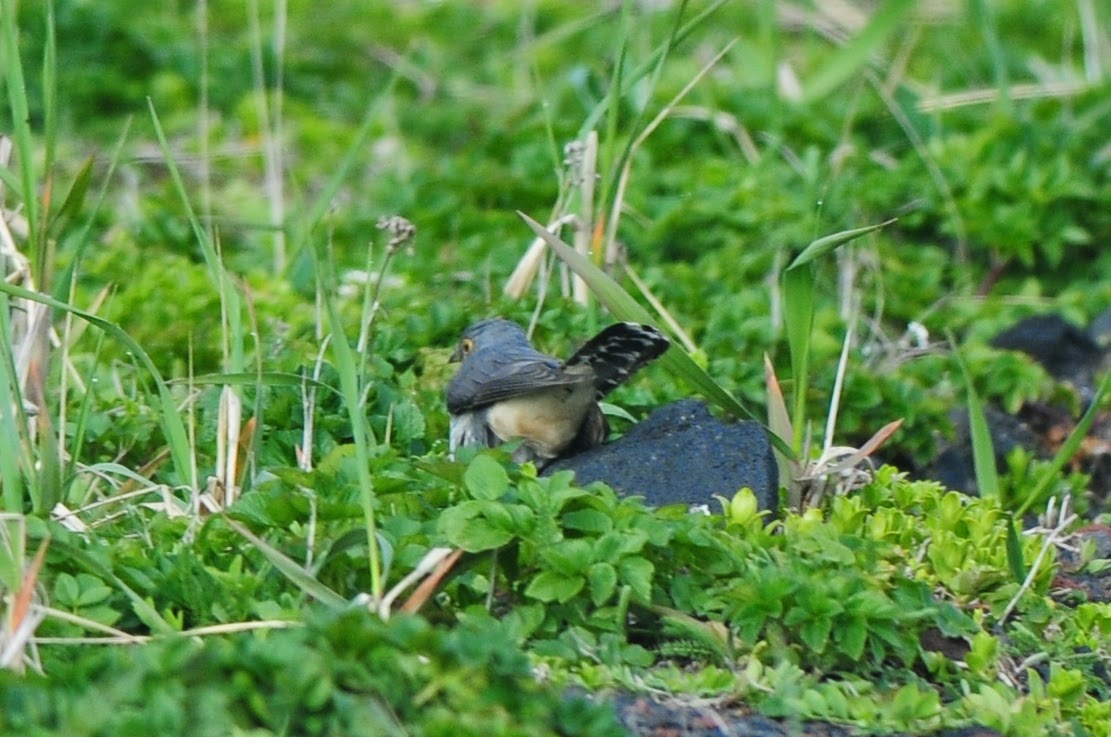 Although I didn’t connect with it, a nice rarity flew by some other birders yesterday; a PACIFIC SWIFT was seen in the NE corner of the island.  Hopefully I’ll get lucky at some point and snag this rarity, one of my most wanted birds.

I can't complain though, I've been fortunate to have the GRAY WAGTAIL fly by me twice now (and not everyone is so lucky with that).  I also had an EASTERN YELLOW WAGTAIL pop up off the side of the road yesterday.  Certainly interesting things continue to show up....
Posted by Cory J. Gregory at 6/15/2014 01:33:00 PM