It was the first day of June and we had been having fairly strong winds from the southwest for several days.  We weren't sure what that would bring but we had our eyes on it.

In the meantime, I spent a full day out guiding.  If you've birded on St. Paul, you absolutely know the Salt Lagoon.  We pass it multiple times a day and it's by far the largest expanse of shallow tidal water on the island.  It's also where many great rarities have been found through the years.  On our check, we found some new arrivals like this BRANT: 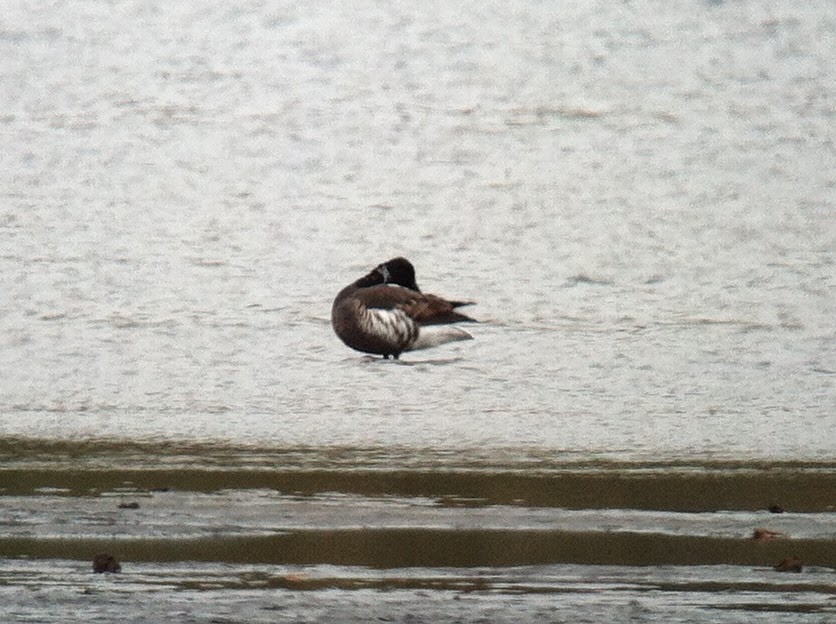 Another new arrival there were two "Vega" HERRING GULLS.  Instead of the American subspecies which is widespread in most of the US, the Vega subspecies is an uncommon visitor to western Alaska and elsewhere in the US: 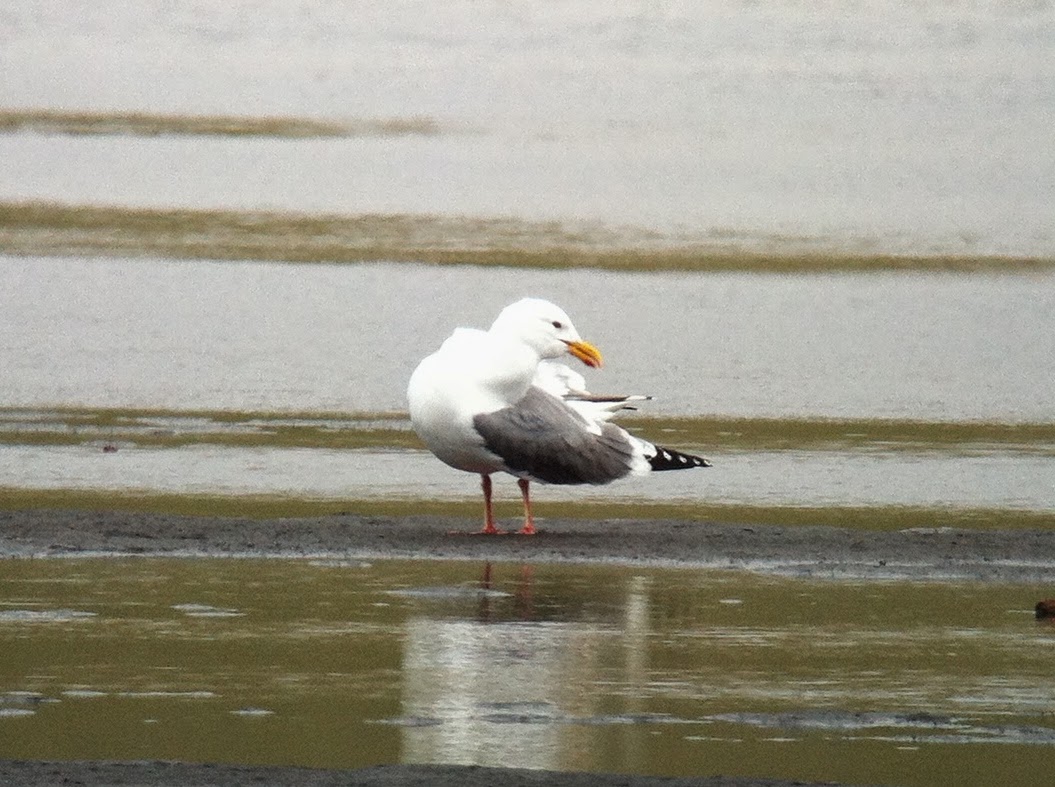 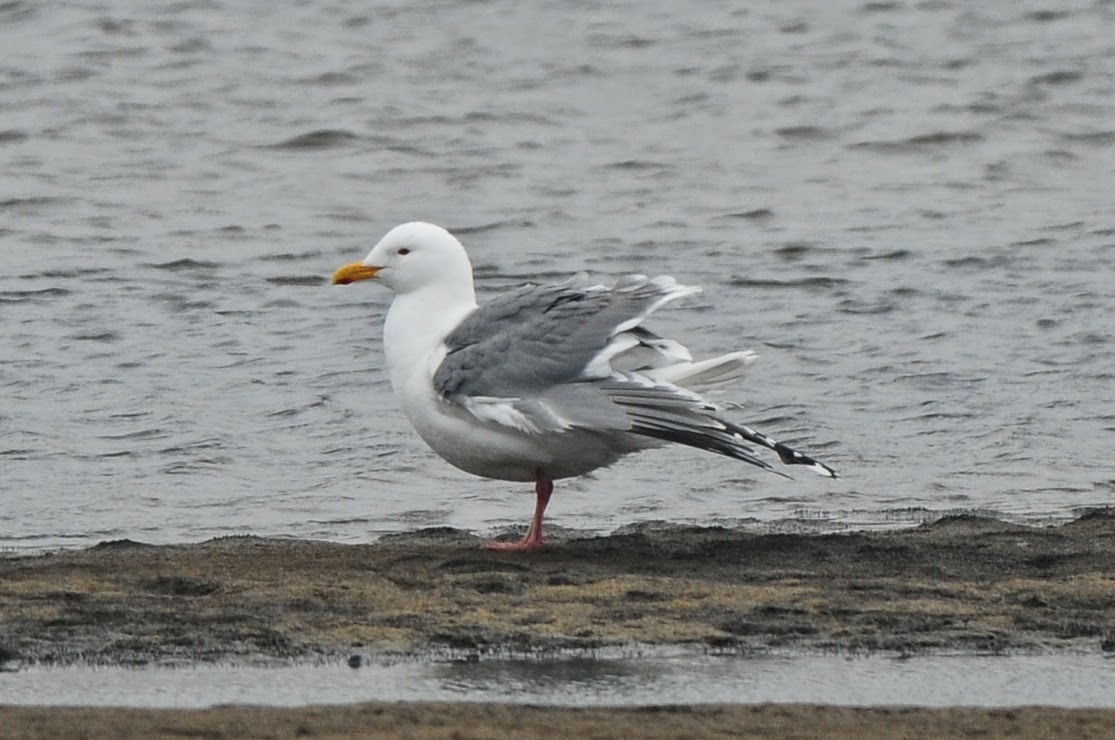 A quick check of the harbor near the Trident yielded my group's first target.  This is the most reliable place to find ANCIENT MURRELETS on the island although they still can be tricky to nail down when you want to.  This one gave absolutely wonderful looks: 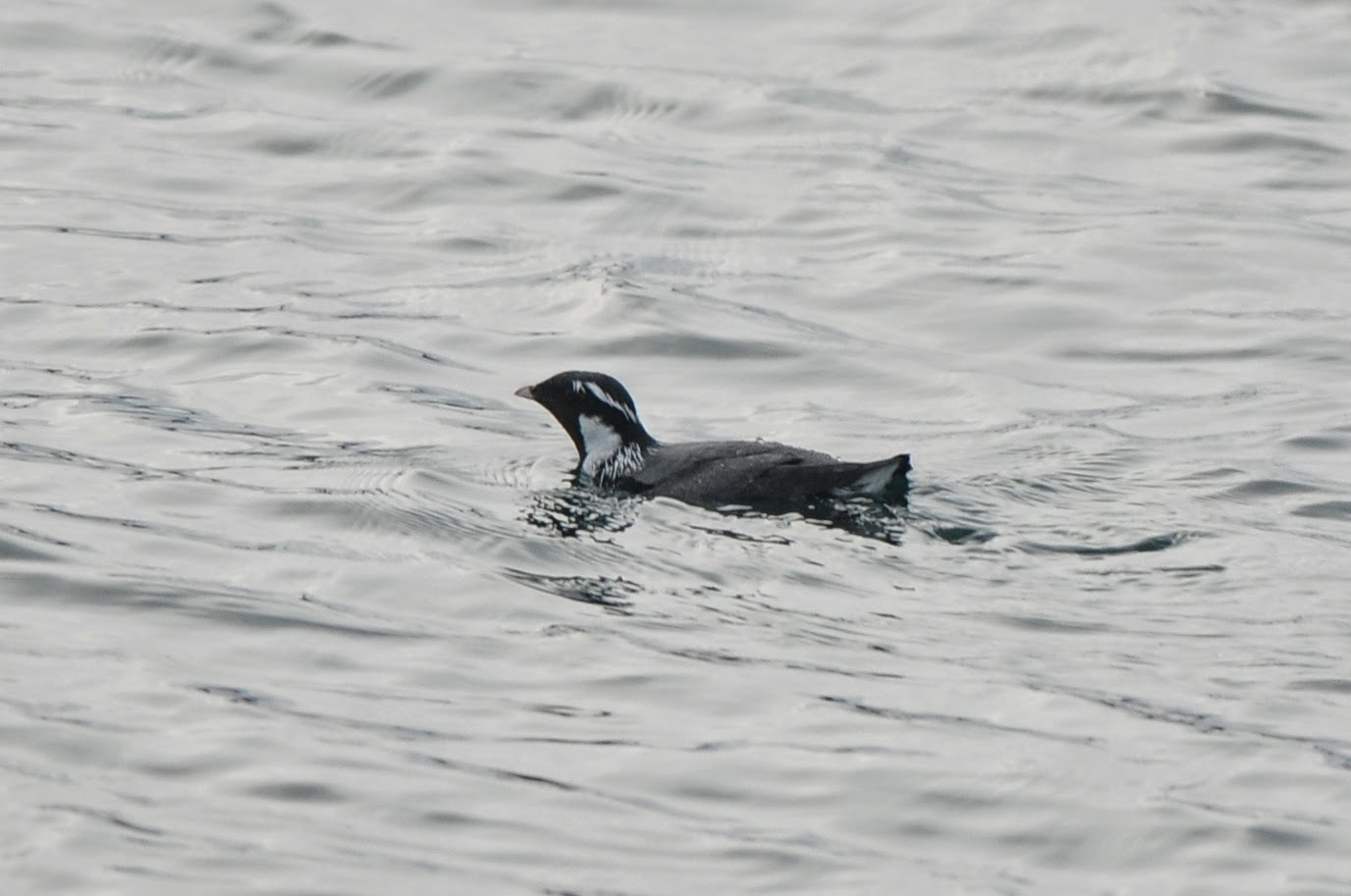 Taking a mammal intermission, the roaming hoard of REINDEER continued in the southwest portion of the island.  This white one, which some visitors called Big Daddy, has the biggest rack of the herd: 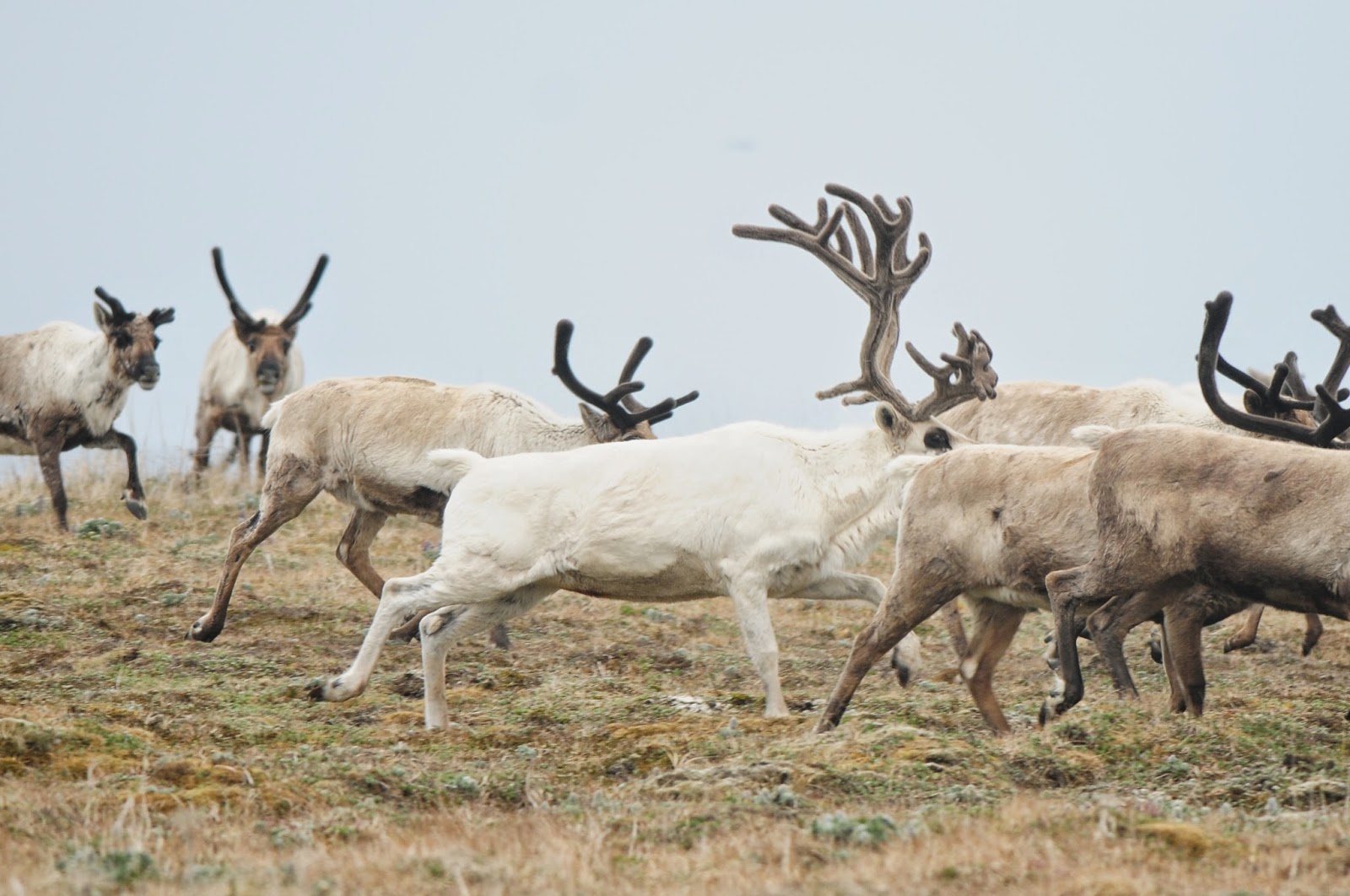 Back to birds, we walked around at Marunich for a bit.  This area is along the north shore of the island and, as with many hotspots on the island, it boasts a nice list of past rarities.  Today we settled for some common species like a very close encounter with a pair of SNOW BUNTINGS.  They were foraging on the rocks along the shoreline and continued to come closer... and closer... until they were mere feet from us: 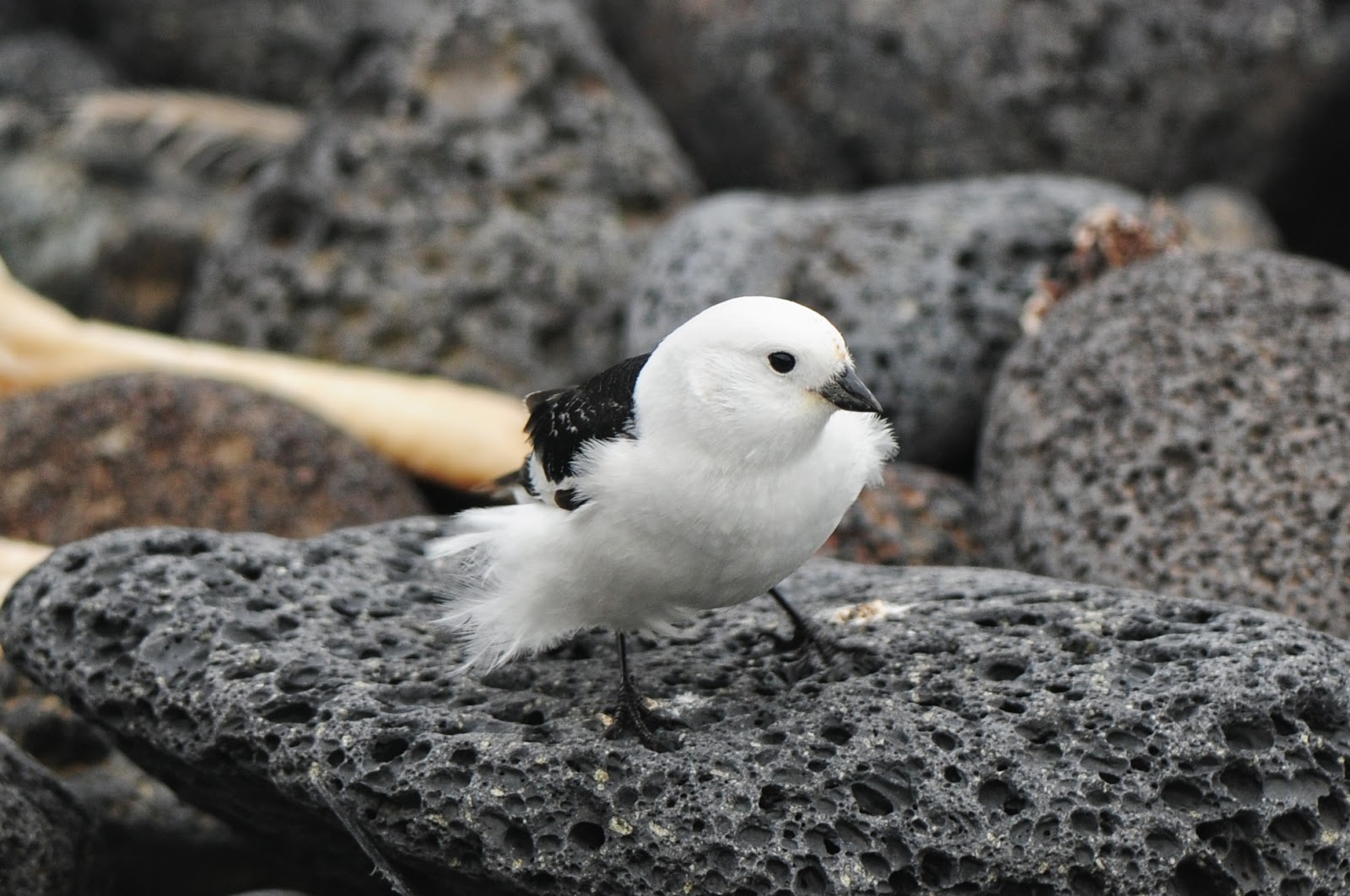 Perhaps our best find of the walk was a pair of COMMON REDPOLLS.  Oddly enough, these were the first two we've had this year despite the island usually having many more in most years.  They were rather shy but I still managed some proof: 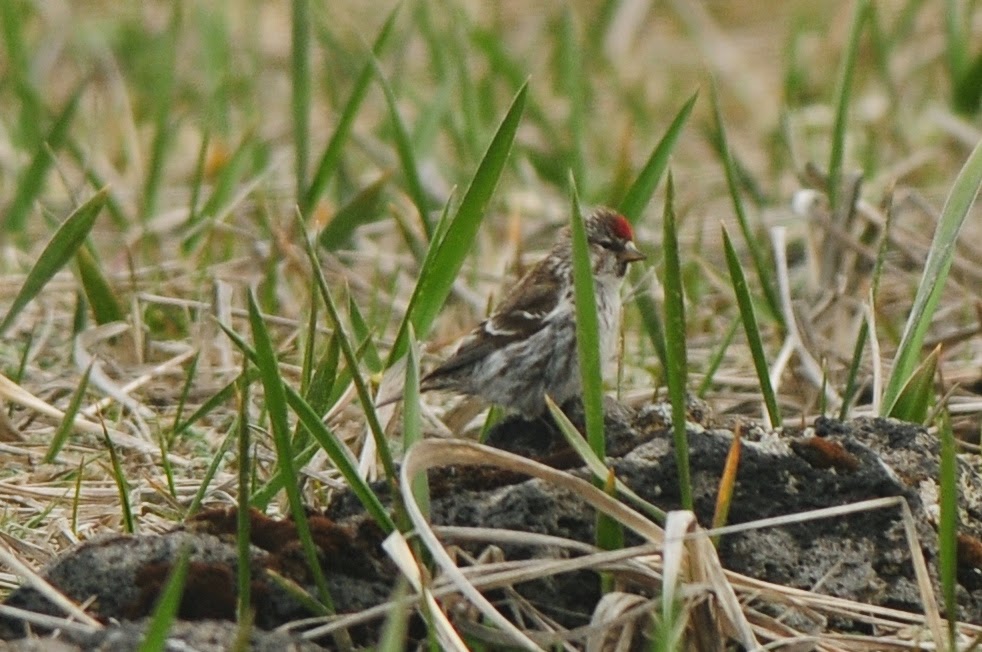 The most exciting moment of the day (for me, at least) was when another group called saying they had a COMMON SANDPIPER.  I sped out immediately and after a couple hours of searching, managed to see the bird for a mere 20 seconds.  This horrible digiscoped photo is at least suggestive.  :-) 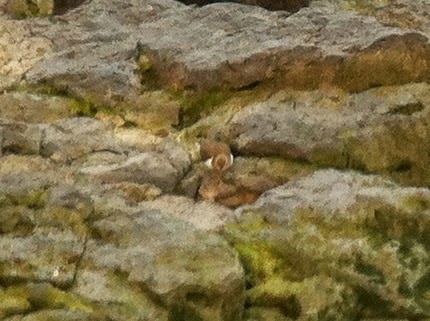 To be clear, this species is NOT common here in the ABA area.  This is the Old World counterpart to our widespread SPOTTED SANDPIPER.  This bird, however, was a stray from Asia.

During the 2 hour search of that bird, I saw that the EMPEROR GOOSE was still continuing at its usual haunts: 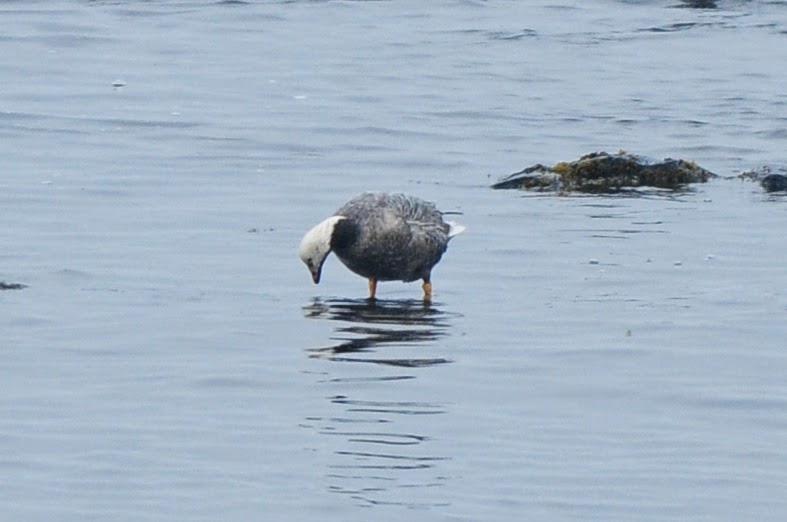 The most unusual species today flew in while we were at the beach at Northeast Point... and it wasn't an Asian vagrant!  This "MYRTLE" YELLOW-RUMPED WARBLER dropped down right in front of us! 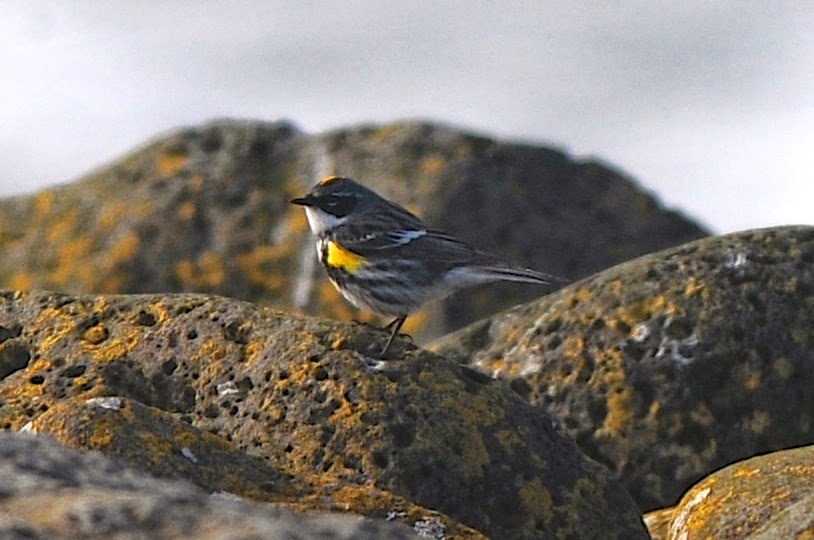 Even though it's abundant elsewhere in North America, this find was actually less expected than the COMMON SANDPIPER.  For me, I'm especially glad I finally caught up with the sandpiper though.