The guy on The Weather Channel was freaking out: "Take a look at this footage taken in Oklahoma City!".  Cars were sliding off the road, trucks were rolling down the side of the highway.  I thought "Wow, that looks terrible" and then remembered "Crraaapp", I was IN Oklahoma City... stuck in a hotel.  -sigh-  I suppose I was lucky to make it to a hotel at all without ramping myself and my Golf over some precarious overpass... but I wasn't happy about being stuck and losing time.

See, there's no denying it; south Texas IS great for birding, even if you're not a fan of anything else down there.  I was lucky that my "sizable year" had me driving through this behemoth of a state multiple times en route to other places and jobs (do you see how I blame my year list for these extra miles and not myself?).  This time, I was heading back through the state after finishing my fall job in Michigan.

However, there were a couple of snags that were making this trip a bit more difficult than usual.  First, I was late in leaving the UP of Michigan due to an ice storm and losing our power.  Next, well, you saw what I found in Oklahoma (that's twice now that I've been stranded in OK by ice storms, btw).  It looked as if I wouldn't have more than 2 days to spend in south Texas.  Hopefully that would be enough time to see the rare Amazon Kingfisher... hopefully... maybe.

I'll get to the point... I DID end up missing the Amazon Kingfisher.  That ice storm I mentioned translated into a cold front there in south Texas and I found myself downright cold... and looking for a kingfisher that never showed.  I stood there on the side of Highway 100 in the wind and drizzle for nearly two days hoping for this bird to resurface and it NEVER DID.  Ok, I get it... Texas is going to play difficult this time around.

I was itching to take pictures of at least something so I started with this SORA that came out of the reeds: 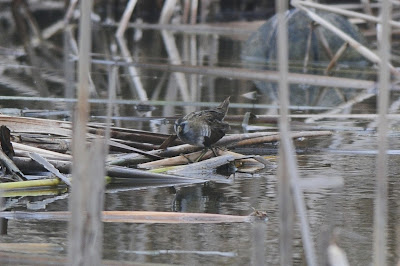 Although not rare, this COUCH'S KINGBIRD is a species of flycatcher that is only found in south Texas within the US.  They are difficult to tell apart from Tropical Kingbird, which is also found in south Texas, but this particular one was vocalizing which is the easiest way to tell them apart: Another common species at the "kingfisher spot" was ROSEATE SPOONBILL.  Pretty... but not a kingfisher: 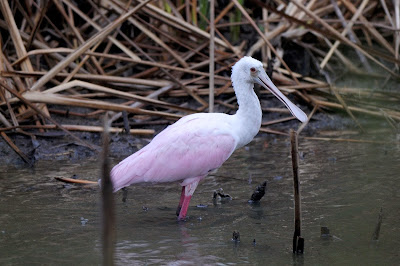 Because I had so little time before I needed to drive to Arizona, I decided I'd like to leave with SOMETHING to show from this detour, perhaps a few year birds at least.  I spun over to Estero Llano Grande State Park to do some target year birding.  Because I had left the cursed Hwy 100 roadside, of course everything fell into place wonderfully.  First on my list was GREEN KINGFISHER, a species I had somehow missed on previous trips.  This time, I didn't even have to stop and look for one; this male (note the orange on the breast which females lack) was perched right along the trail I was walking: 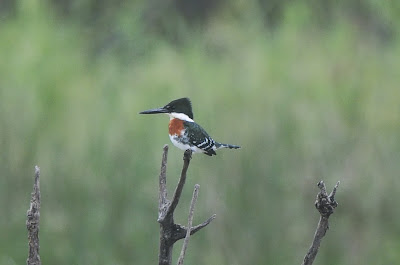 This aforementioned trail was leading me to perhaps the most reliable roost for COMMON PAURAQUE known to birders in the US.  These nightjars roost only an arm's length from the trail day after day.  In fact, I was too close; I had to take a few steps back in order to even focus on the bird: 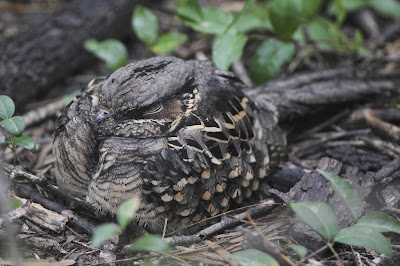 So those two year birds were all too easy.  There was a third that I curious about; EASTERN SCREECH-OWL.  Believe it or not, I had made it to late November without seeing this common eastern species and this was my last chance.  Estero Llano Grande just so happens to have a reliable one that uses a nestbox near the pauraque roost spot.  Once I got a glimpse of the box, there was no mistaking what was sticking out of it: 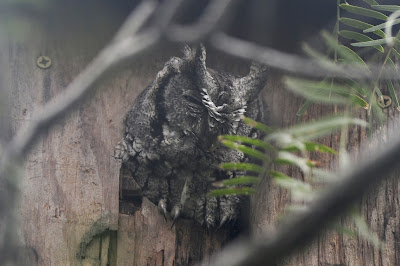 I should add that the screech-owls down in south Texas are actually of a different subspecies than the ones to the north and east.  Known as the "McCall's" Eastern Screech-Owl, this subspecies only comes in the gray color morph, it has a more limited vocal repertoire, and is limited by range.  Although it's not all that likely that this will be split into a different species anytime soon, it pays to take note of sightings.

With three easy year birds snagged, it was time to head back to the dreaded Amazon Kingfisher highway.  Two photogenic PLAIN CHACHALACAS along the trail on my way out whispered "good luck"... or maybe they were whispering about wanting to gobble up my toes, I can't be sure. 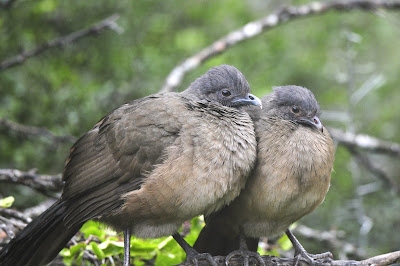 The Amazon Kingfisher eluded me again and before long, it was time for me to put that place in my rear-view mirror PRONTO.  I headed north into farming/ranching land on my way out for just one more target; SPRAGUE'S PIPIT.  I hadn't driven through the breeding range of this somewhat secretive species earlier in this year which relegated me to look for it on the wintering ground.  A quick search of recent eBird sightings told me where to go; Road 375 north of 1018 in Willacy County.  You got it.  Here's a map of where to spank some Sprague's:

Not more than a couple hundred meters up the road, a bird with white outer-tail feathers flushed from the shoulder and landed out on the bare field.  It was a very easy snag of SPRAGUE'S PIPIT. 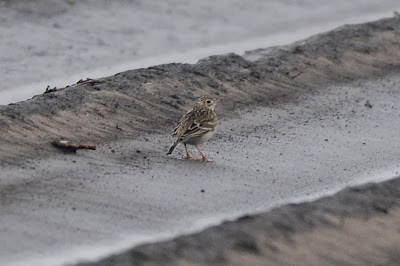