It was December 1st and I finally had made it back to California after a 4 month absence.  Back in September, a major invasion was occurring along the West Coast.  The BLUE-FOOTED BOOBY is a seabird that rarely strays northward from Mexico but the invasion of fall 2013 will be one for the records books.  When this species has strayed north previously, you might have expected one or two at the Salton Sea or coastal San Diego County.  Well, this invasion was a little different... a tad more... intense.  It brought between 100-200 to the Salton Sea alone!  They also filtered north along the coast as far north as British Columbia.  Still to this day there are one or two boobies as far north as Marin County (near San Francisco).

Of course, I was sitting in the UP of Michigan reading all these reports; I was stuck there until December.  Would any of these boobies, a potential world lifer, stick that long?  I was hopeful until I heard that ALL of the Salton Sea birds had either died or left!  That's NOT good!  Thankfully, December 1 rolled around and there were still 4 long-staying birds at Lake Skinner in Riverside County.  These birds, first found on September 13, had apparently found a lake with enough food to keep them well-fed.  Here's a quick map of Lake Skinner:

The four birds were waiting for us, sitting on the boat docks along with cormorants: 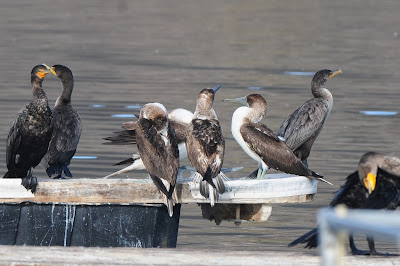 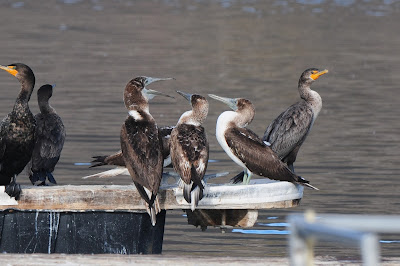 After we had our fill, it was time to drive north into Los Angeles for another lifer.  This one just became countable earlier this year.  The NUTMEG MANNIKIN (also known as Scaly-breasted Munia) is a bird native to wet and reedy areas of tropical Asia.  However, they've become established around the Los Angeles area through the years and they're now officially countable for all the ABA listers out there.  Because I was driving through the area, it was high time to finally see these guys.

The go-to spot, as far as what friends had suggested, was Fullerton Arboretum:

It was here, in a thick stand of bamboo/cane, that we first heard the mannikins calling.  We zoned in on the calls and first found several females feeding above us: 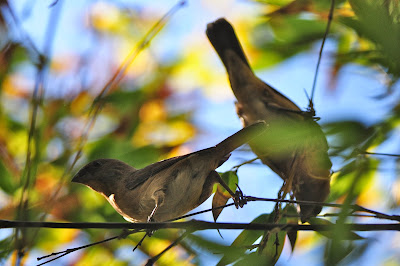 A little bit more digging around in the cane and we started seeing males as well including this one: 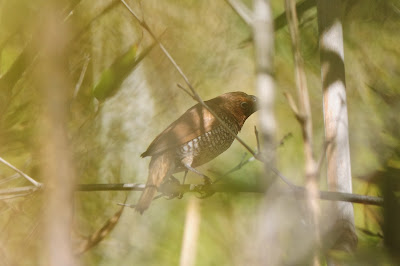 During our mannikin searching, there were also a couple of ALLEN'S HUMMINGBIRDS buzzing around us including this bright male: 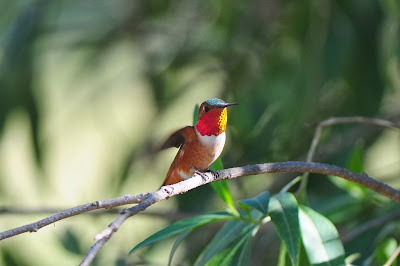