I don't think I've ever addressed the "Sizable Year" in my blog so this seems as good of a time as any.  Yes, strap yourself in, I'm going to be bragging about birds in this post.  See, my birding this year has evolved dramatically.  I started the year out stuck in California where my bird-related job put me outdoors nearly every day.  Ok, cool, right?  Lots of birds.  But... I also was eyeing some rarities that I wanted to chase... so I ended up doing that too.  Red-flanked Bluetail, Sky Lark, and Brambling in British Columbia, Pink-footed Goose and Northern Lapwings in New Jersey, etc.  Sure, quality ticks.  But then I realized that I was going to do a little traveling this year.  Hmm...

Then came a job in coastal Georgia where I worked with shorebirds every day.  But first I had to get there from California.  Well, as any crazed birder would have, I chased stuff along the way.  Additional quality ticks occurred such as Spotted Redshank in Indiana, Thick-billed Vireo and Western Spindalis in Florida, Black-tailed Godwit in Virginia, etc.  Working in Georgia helped me clean up a different corner of the country too.  For example, Swainson's Warblers bred just inland from where I was!  Easy peasy.  After that job finished, I was off to Florida again after some more life birds.  Ash and I snagged things like Black and Brown noddy, Brown and Masked booby, Sooty Tern, etc.

It was about this point that I realized what I was heading for... a decent ABA year list.  Now, this isn't a Big Year, as people often called it (if you're interested though, you should check out Neil Hayward's blog as he's getting close to the record).  But anyway, no, I wasn't hopping a flight to chase single birds, I wasn't driving 30 hours just to tick a year bird.  More importantly, I wasn't going to Alaska or taking any pelagic trips.  Besides, I'm just a poor boy, traveling and doing bird work around the country.  However, I WAS putting some effort into snagging birds along the way.    So... the "Sizable Year" began.

After Georgia and Florida, it was a prime time to head up to New York to visit family and snag a bunch more year birds (Bicknell's Thrush was a prime target, for example).  Then driving back via Michigan, I caught up to Henslow's Sparrow, etc.  One by one, these targets started being achieved.  It was time for south Texas... AGAIN.  Yellow-green Vireos were there and waiting... so that happened.  White-collared Seedeaters were easy; overall, another solid visit to south Texas.  Ash and I birded Arizona a bit and picked up more things like Rosy-faced Lovebirds, Buff-collared Nightjar, Lucifer Hummingbird, etc.

Back home in California, I couldn't rid myself of the bug; I chased some more year birds like Lesser Sand-Plover and California Gnatcatcher in San Diego and Spotted Dove in LA.  There was no turning back now... year birds were on my mind.  I never set out to break any records other than my own; I really wanted to reach 600 in a year, something I had never done before.

The next step came when I decided to work in the Upper Peninsula of Michigan for the fall.  This would be a great way to catch up with some more northerly species that I had missed so far.  But just like all my other field jobs... I had to drive there first.  This time I had a set list of targets as I drove from California to Michigan.  I didn't get them all, of course, but did manage to snag Black Rosy-Finch, Himalayan Snowcock, Pinyon Jay, White-tailed Ptarmigan, Chukar, American Three-toed Woodpecker, Brown-capped Rosy-Finch, etc.  The mountains were good to me... but how about the prairies?  I was running out of time to find breeding species there.  And yes, I missed some gettable birds.  But I also managed to stir up Lark Buntings, Chestnut-collared and McCown's longspurs, and late Upland Sandpipers.  Just before I got to Michigan, I very luckily snagged Golden-winged Warbler and Eastern Whip-poor-will in Wisconsin; it would be silly to miss those!

After reaching Michigan, year birds came fast and furious.  I ended up tallying 28 different year birds during the fall waterbird count there.  I was closing in on 600... but I needed a few more.  I know, I needed another trip to Texas and Arizona!

So, that was the background.  Now that you're up to speed, it's time for me to leave Michigan and head back home to California.... via the loooonnnggg way home.

Leaving Whitefish Point was more difficult than I wanted it to be; we had a blizzard that knocked out power for a day and coated the roads with ice.  Lovely!  I wanted to bird my way down to south Texas and this wasn't the start I had hoped for.  I finally did escape though and this lonely COMMON MERGANSER at the river mouth was one of the only birds to see me off: 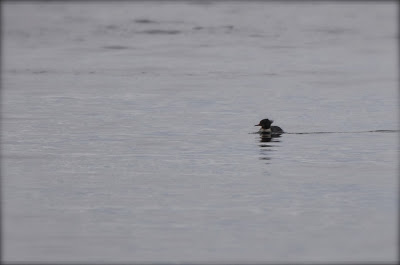 Elsewhere in the UP, I had these 5 Tundra/Trumpeter swans fly over.  Sadly, they were going the wrong way and I didn't get a great look at them: 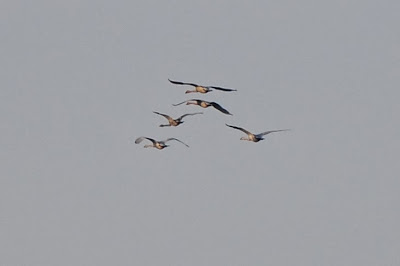 Once out of the UP, I also saw a phoebe in Iowa.  Rather, my niece Phoebe!  I had returned to Iowa for a brief visit and enjoyed seeing family and my former home.  In fact, I drove through Ames and briefly stopped by my old apartment.  The trail out back didn't look all that different from when I left in 2011: 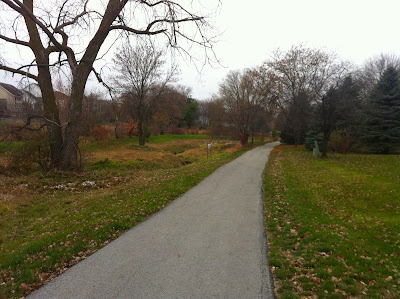 After Iowa, I headed straight for Kansas where I had a few year birds targeted.  First up, Smith's Longspur at Lyon State Fishing Lake near Emporia.  This was a species I had obviously wanted to find in Michigan but it just never happened for me.  But Lyon SFL was my go-to spot in previous years so I had hopes of finding them there again.  Although no one had eBirded any from there this fall, I took to strolling the fields and a few minutes later, boom, 4 SMITH'S LONGSPURS flushed right in front of me.  Excellent.

Another target for me in Kansas, albeit quite easy, was HARRIS'S SPARROW.  This species can be fairly easy in the UP of Michigan but it was another species that just didn't occur at Whitefish Point this fall.  I stopped at a few bushy thickets along some Kansan roadsides and it wasn't long before a hoard of 30 popped up.  Here's one of them: 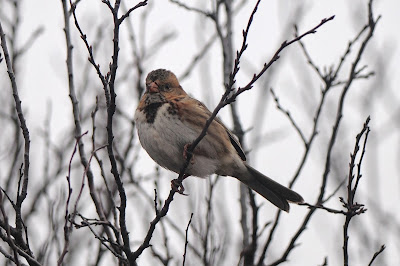 I had hoped for GREATER PRAIRIE-CHICKEN but, along with many of the grassland chickens, I just wasn't at the right place at the right time this year.  Oh well.  I am quite partial to Kansas though.  Anyone have a bird-related job there for me???? 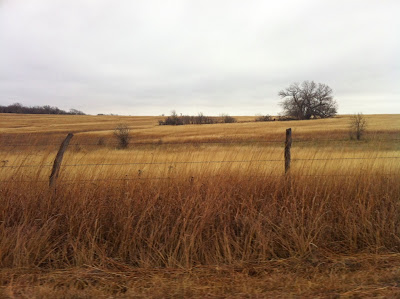 So, I had finished in Kansas snagging 2 of the 3 targets I was after.  Not bad considering my pressed time schedule.  Now it was a straight shot down to southern Texas were a slew of year birds were waiting for me.  With a little luck, I might also see the continuing Amazon Kingfisher and Rose-throated Becard that had been seen earlier.  Of course, it's never that easy.  Stay tuned...