"THE ATLAS OF BIRDS"

How long has it been since I've reviewed a book?!  The time has come, though, to catch up with some neat books by Princeton Press.

First up, "The Atlas of Birds; Diversity, Behavior, and Conservation" by Mike Unwin.  This is a 144 page book published by the Princeton University Press.  It was published in 2011 and is listed as $22.95.

Straight off the bat I realized that this was not your average kind of "bird book", not something you take out into the field or anything like that.  Instead, this was a collection of distribution maps, interesting graphics, and colorful charts that would brighten up any coffee table.  Unlike most of our bird books, the author didn't include maps just for particular species but more so for families of birds and distribution trends.  Here's an example looking at the distribution of Pigeons to Cuckoos: 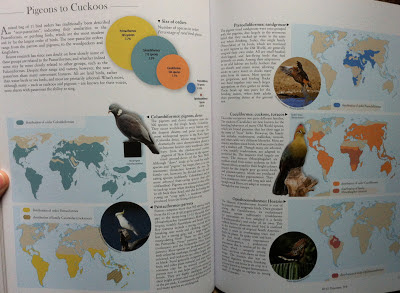 Here's a similar spread about swifts and hummingbirds: 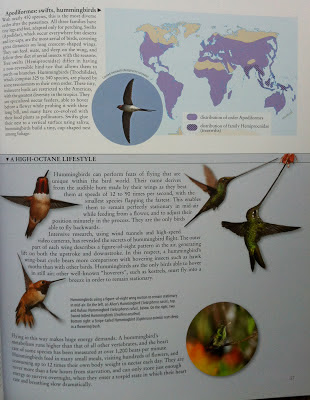 There is no shortage of charts, pie graphs, and maps in this book.  They're not all on the same topic either but a wealth of different ideas and concepts relating to birds of the world.  You can learn more about:

The list just goes on and on.  And on essentially every page?  Maps!


Th below page talks about "Birds on the Move" and shows flight height, some migration routes, etc.  For example:

"Most migrating birds usually fly at between 200 - 1500 m (640 - 4800 ft) above sea level.  They fly lower when the wind is against them, as ridges, tress and buildings lessen its force.  When the wind is behind them they fly higher, to benefit from its full force.  Mountains compel birds to gain altitude.  Bar-headed Geese (Anser indicus) in central Asia regularly cross the Himalayas." 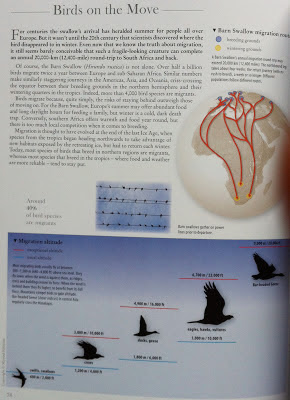 I'll mention it again; colorful maps... there really are too many to include here but here's just an average page filled with photos and interesting graphics: 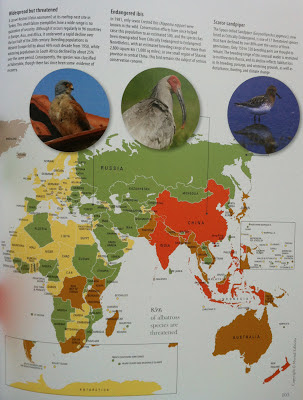 As the title suggests, not only are there maps but there is a real conservation theme to this book as well. The author spends time writing about BirdLife International, campaigns & conventions, saving species, protecting places, extinction, etc.  I think the author does a good job at first amazing you with unbelievable facts about birds but then bringing to light the need for conserving many of these amazing varieties.

So honestly, is this my kind of book?  For those of you who know me, you know my affinity for maps of all different kinds.  Combined with birds, how exactly can you go wrong?  Although this is not a field guide of any sorts, it's a very interesting combination of informative graphics and refreshingly-bright maps.  I encourage you to take a look and see what you think.

Disclaimer:  I received a complimentary copy from the publisher for review purposes, but the viewpoint expressed in this article is entirely my own.