WATERFOWL OF NORTH AMERICA, EUROPE, AND ASIA: AN IDENTIFICATION GUIDE

"Waterfowl of North America, Europe, & Asia" by Sebastien Reeber was published in 2015 by Princeton University Press.  It is a 656 page hardcover that runs $45.00.  You can find it online here.

If you came up to me and asked "Hey, are you a duck guy?", as in... have the mysteries of waterfowl long entrapped your soul and do you stay up late at night to study molts of cotton geese or Comb Ducks... well, the answer would be "no". (Actually, my subconscious just caught up to me; I had just mistyped "ni" but that brings up a good point too... my more accurate response probably WOULD have been "Ni!"

But still, I'm happy to get my duck on once in a while and I DO find many aspects of waterfowl completely intriguing.  So, with that, I was happy to review this book from PUP.  Let's get started...

I mentioned the heft of the book.  Indeed, it's not a small book but you wouldn't expect it to be considering it's 600+ pages loaded with 650+ color photos, 85 color maps, and 72 color plates.  You'll note that this ISN'T A FIELD GUIDE; I'd consider this more of a reference guide of types (but by all means, use it how you will).

The layout of the book is pretty straightforward; after the introduction with all the usual stuff like "how to use this book", basic anatomy of birds, and a wealth of other intro material, you come to the plates section.  There you'll find color plates on the right with the corresponding plate information on the left.  Here's a quick example with the white-fronted geese as a show-and-tell: 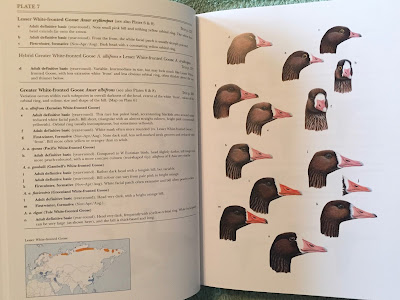 (I might insert here, rather sheepishly, that my photos of the pages look quite yellow due to the artificial light I was using.  Keep that in mind as you continue reading.)

Anyway, here's a closer look at a plate example, this time using a rowdy hoard of bean geese (and pink-foots) as our subjects: 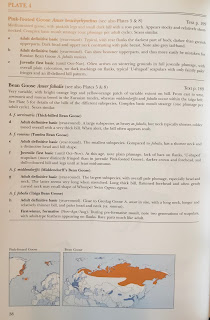 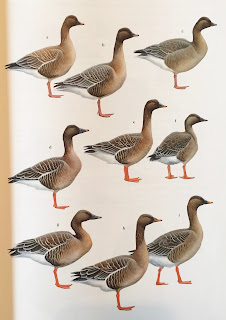 You'll note that they do include the maps in this plate section which is fine with me; I'd probably prefer them to be up front like this anyway.  As you can see above, the maps are quite basic; don't expect a rundown by subspecies or anything fancy.  You can see the summering range is colored in orange and wintering range in blue.  If you aren't familiar with that color scheme, you probably aren't too familiar with other bird books (not that there's anything wrong with that).

If the species shows little subspecies variation, the plate selection will be pretty basic.  However, sometimes they go a bit further when you go farther (turning the page might yield another set of plates).  For example, here's an additional page of the bean goose morass continued from the account you saw above, this time with more examples of bill variations: 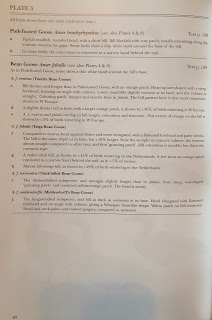 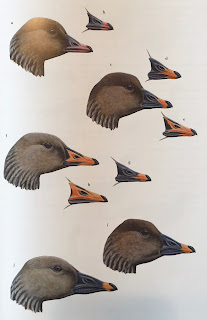 Seriously though, I'm pretty impressed by these plates.  They include a lot of detail, way more than you'd find in your typical field guide.  The author could have chosen to include fewer illustrations but I like the fact that he went the other way.

Case in point, kudos go out to those that know these following traits by heart.  Here's the text followed by the plate: 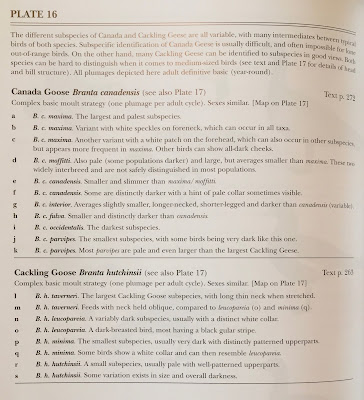 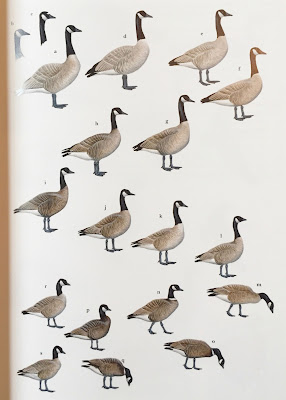 Yes indeed, we're talking about white-cheeks now!  The white-cheeked geese complex (Canada and Cackling geese) is a challenging one but the author does his best to scratch the surface.

Although when you turn the page and find more on this complex, I noted he left out close-up illustrations of races like B. h. leucopareia, a favorite of mine from California: 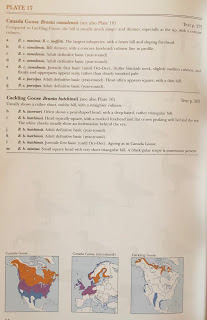 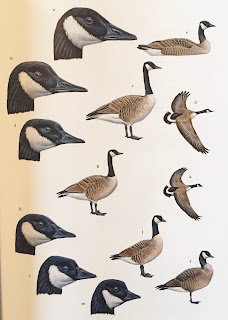 Here's a plate devoted to the white geese: 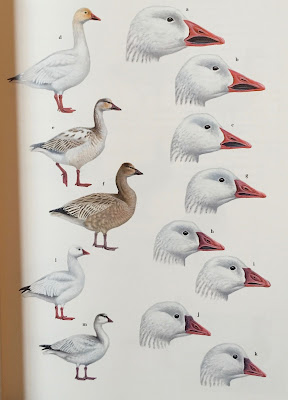 Notice anything askew with those heads?  If you looked carefully, you'll see some that don't really belong to either species.  Looking at the corresponding page, you'll see that they include several examples of hybrids between the two (a must-have in this day and age): 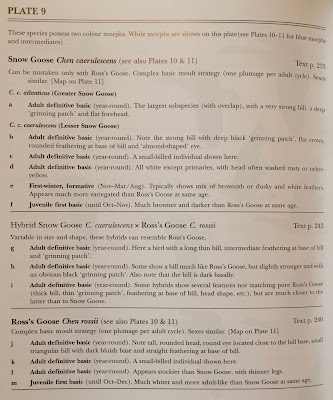 I said it though... the "h" word.  I'm happy to bring that up though because this books really excels in its coverage of hybrids.  Here's a delightful plate full of identification horror, a right mess: 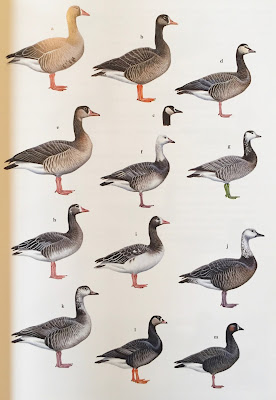 Think you can figure out the parents of those hybrids?  Take another look and then compare it to the corresponding text below: 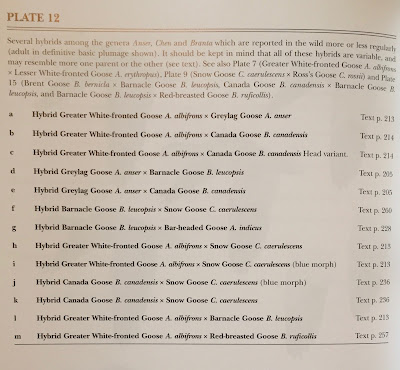 Hey, I DO like swans though.  You all remember the "Bewick's" Tundra Swans we had up on St. Paul a year or two ago?  These illustrations would have fit in nicely with that conversation back then: 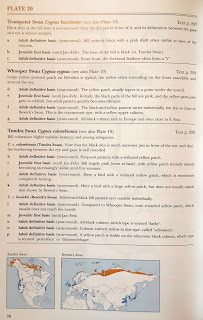 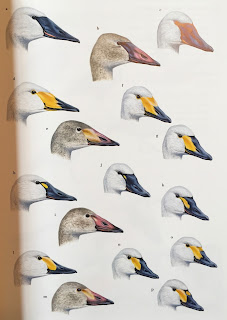 Oh, and more HYBRIDS!  Lest you forget: 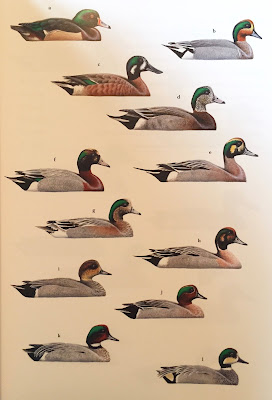 That's right, just in case you forgot about hybrids, I found another plate of them.  I'll leave you to squirm with those.  :-)

This book covers the Aythya genus better than any others I've seen.  Plate 43 is the 2nd of 3 plates that deals with Canvasback/Redhead/Common Pochard.  But you'll note below that most of the illustrations on this plate are devoted to known hybrid pairings: 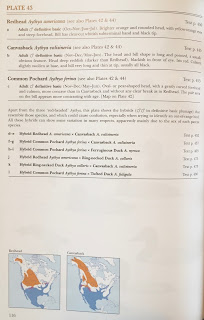 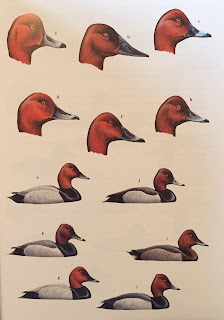 Or if you're interested more about the female types of those three species, the 3rd plate will surely satiate your appetite for complex (including hybrid) issues: 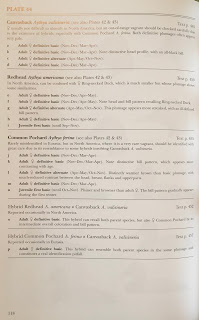 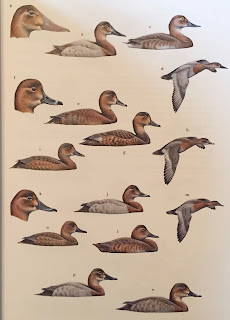 Ok, at this point I think I've illustrated enough about what the plate section entails.  In truth, MORE of the book is devoted to the species accounts that make up the last 3/4 of the book.  In this section you'll find an impressive wealth of textual information; it starts with paragraph headers such as:

Besides all that info, the author continues by including a photographs section after the aforementioned text.  Here's a quick look at the photos from the bean-geese complex: 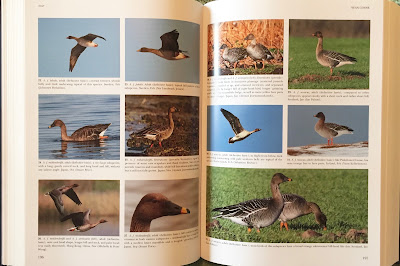 Actually, I figure it might be helpful if I just give you a straight-up, complete example of a species account.  I'm going to choose Falcated Duck because... well, let's just say it's a shout-out to Colusa NWR.  :-) 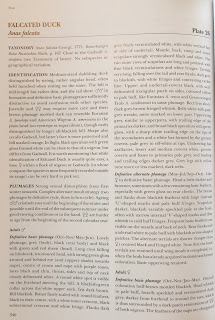 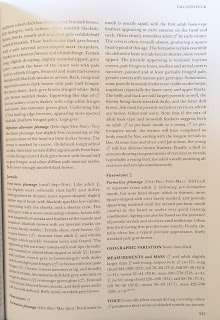 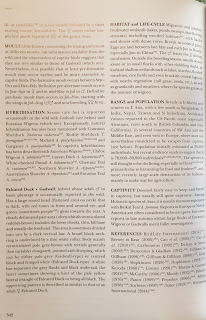 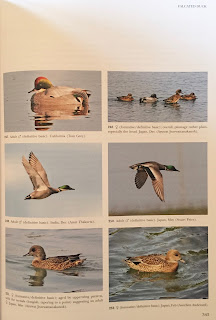 Did I mention the section on captivity present in each species account?  This book is the first I've seen that talks about prices of birds!  Check out this example from a species (which I've since forgotten):

I can only guess they REALLY meant to say "... low, LOW prices!  Shop and save today!"  But seriously, I'm glad they're considering this aspect and including these details because issues of nasty origin are all-too-common with vagrant waterfowl.

You'll see that most of the species account is text before coming to the photo section.  Although that's true for most of the species, sometimes there are added illustrations.  For example, here's a bonus feature in the wigeon section: 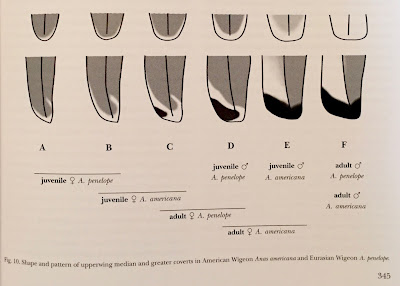 I'm sure you remember me raving above about the hybrids... but check THIS out... they even have their own index (and thank goodness, we can't have this filth minglin' with our pure bloods!): 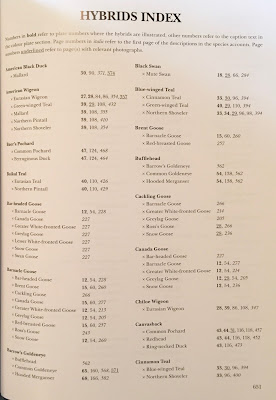 Ok, so I've tossed a bunch of photos up here and even managed to rope Monty Python into the mix (so this review can't be a total failure).  But if you've read through this review this far, you're deserving of my real, actual, and very concise thoughts on the book.

*  Range maps are too simplistic (to be fair, I'm sure distribution wasn't the driving force of this book)
*  I'd like to have seen more photos in the species accounts to really round it out.  At this point, they help but they're not as in-depth as the plates are.

In the end, I DO think this is a valuable addition to your reference material.  The amount of information in this book is actually quite impressive when you flip through it; it's more than enough detail for a lifetime of waterfowl perusal.  I know that personally, if I had a question about some nitty-gritty detail of a duck/goose, I'd turn to this book first.

Disclaimer:
I received a complementary copy from the publisher for review purposes,
but the viewpoint expressed in this article is entirely my own.
Posted by Cory J. Gregory at 7/03/2016 12:41:00 PM