Calm before the storm

These summer days just continue to roll on by; sometimes faster than you want, sometimes slower.  It seems like the slowest days are hot, quiet, and muggy... funny how that works.  Missouri IS a hot and humid place for this northern boy... although I suppose people who grow up here are used to it.  Though some of the afternoons are unpleasant away from air conditioning, that still leaves the early morning to be out-and-about.

Lately, the mornings have been quite nice with even a touch of coolness to the air (if you can call 66 degrees cool!).  The sunrises have been nice too, sometimes with that foggy ground layer hovering over the damp grass: 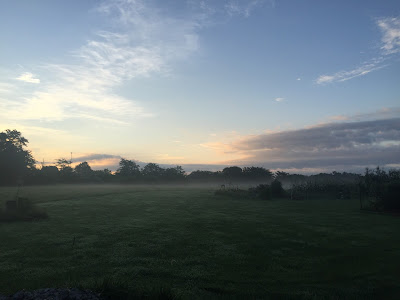 Trying to make the most of the cool times of day, I often head out for a drive-about.  Yesterday I ventured westward to Mark Twain Lake.  This severely under-birded reservoir sits in two counties, Ralls and Monroe (which might make listing a bit complicated).  There is a giant spillway below the dam (Clarence Cannon Dam), as you would expect from this man-made lake.  I'm certain it will host a number of gulls come winter but for now, it's a rather tranquil spot early in the morning before all the fishermen show up: 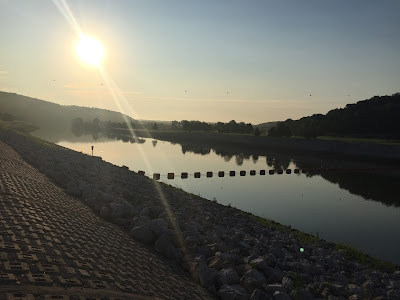 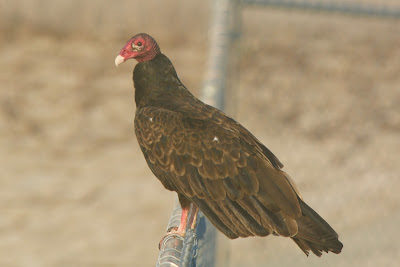 The vultures and herons weren't the only large birds with a hankerin' for some dead fish though; this adult BALD EAGLE did its best to give a regal fly-by: 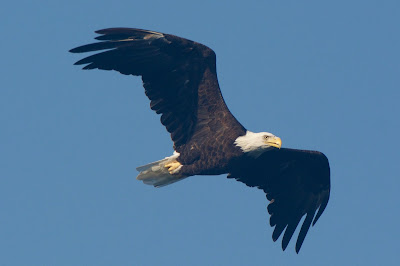 Elsewhere on Mark Twain Lake, the 7th largest lake in Missouri, I've been exploring lately to find a few access spots.  I'll say it again... this lake will absolutely host a nice variety of birds later in the fall/winter and I'm looking forward to the days of ducks, loons, and grebes.  For now, though, this flock of RING-BILLED GULLS was about the most exciting thing happening: 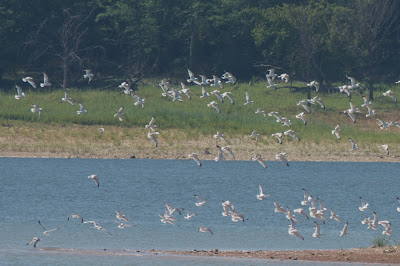 Mixed in with the gulls have been a couple of FORSTER'S and CASPIAN TERNS.  I imagine later in the fall we'll see things like Franklin's and Bonaparte's gulls.

Anyway, once it warmed up that day, the butterflies came out in force including this WILD INDIGO DUSKYWING: 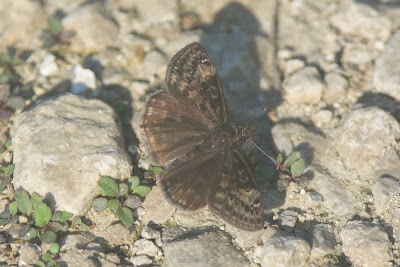 Now I just wish I could find this species back on the property... it would be a new species there.

There was also this bright orange skipper darting about, I'm pretty sure it's another DELAWARE SKIPPER: 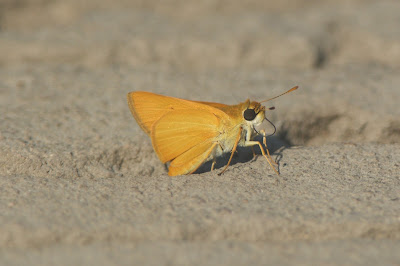 Yet another skipper from Mark Twain Lake, this one being on the other end of the brightness scale, was this COMMON SOOTYWING catching some warming rays: 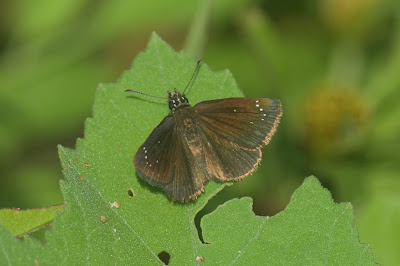 This is a species I would see in Iowa and Nebraska when I lived there from 2008-2011.  However, I have seen few, if any, since those years so it was fun to see them again.

Back on the property, butterflies are some of the only interesting things flying around these days.  They range from this tiny LITTLE YELLOW: 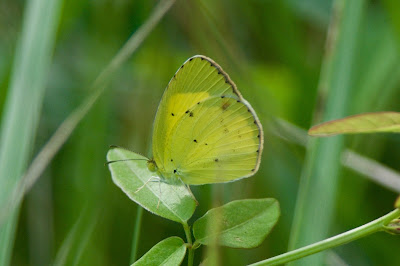 ... to this behemoth known as a GIANT SWALLOWTAIL: 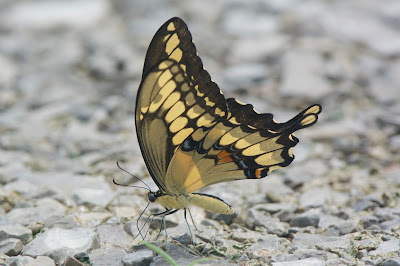 Somewhere in between is this crisp, black-and-orange SILVERY CHECKERSPOT performing well in nice light: 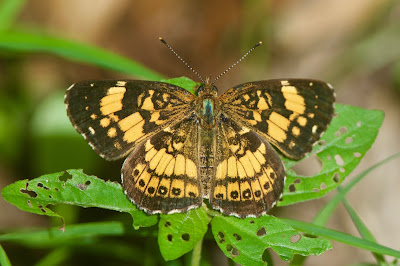 However, the most interesting butterfly I've seen lately is this bright orange monster.  Look familiar to anyone? 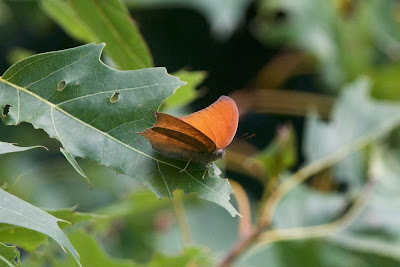 This new species for the property is a GOATWEED LEAFWING, so named because when it closes its wings, it's very reminiscent of a leaf.  They're very fast flyers though so it took me a bit of work before I caught sight of where it landed.  Interestingly (for me, at least), I think this is the first time I've seen one since 2008 when I lived in Kansas.

Ok, fine, let's not leave out the dragonflies completely. Here's a WIDOW SKIMMER (Libellula luctuosa) looking pretty sharp out along the field edge: 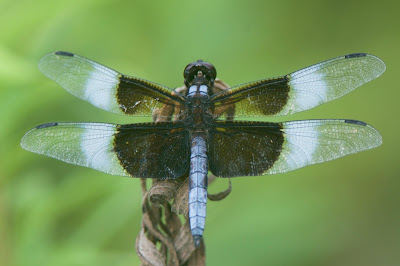 Just today I headed east to Lock & Dam 22 on the Mississippi River.  This dam sits only 10 miles east of us (as the Fish Crow flies).  Yes indeed, FISH CROWS are findable here; here's one perched near the dam: 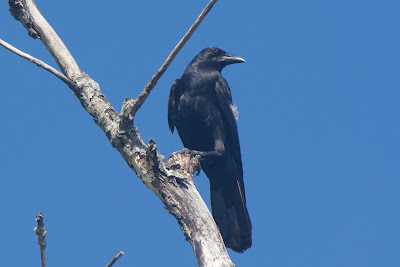 Sometimes they literally use the dam.  Here you can see that not only can these crows read, they obey signs: 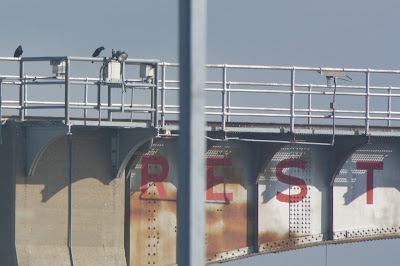 But seriously, it's neat having this smaller species of crow around (I'm sure some of you are thinking "Woah, I didn't even know there was more than one kind!).  This species is found up the East Coast, through the south along the Gulf Coast, and then up the Mississippi River Basin as far as Missouri.  They've colonized areas farther north as well but Hannibal is pretty close to the northern normal limit of their range.  Speaking of the Mississippi, here she is on a sultry, summer morning.  You're looking northeast and the land on the right/far side is Illinois: 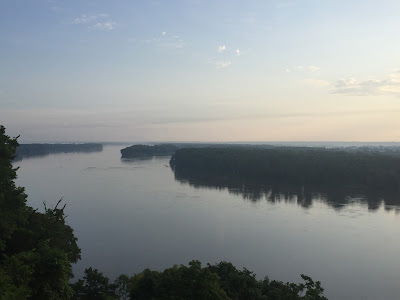 Anyway, so this is the calm before the storm, you ask?  Indeed, I'll be venturing to South America within the week... very unlike this train that was venturing through Hannibal: 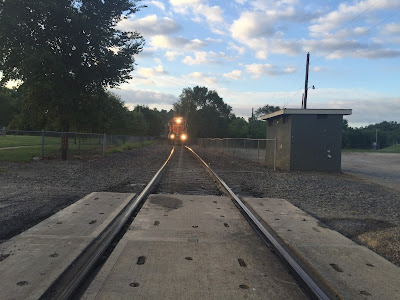