When I look back through some photos from the past week, I'm struck by one similarity; they're all brown creatures with spots!

Now, I'm sure Missouri has more to offer than brown-with-spots at this season but alas, here we are.  I'll start with some butterflies because, frankly, I have more hopes of seeing a new butterfly than a new bird these days.  Here's a COMMON WOOD-NYMPH, an abundant species you'll see bopping along in bouncy flight: 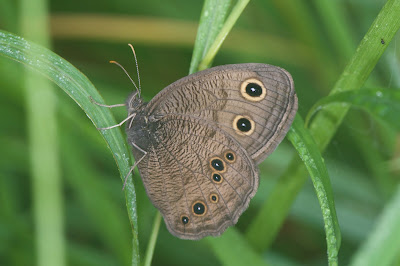 Keeping with the theme, here's another butterfly that's brown with spots.  This time it's a LITTLE WOOD-NYMPH, another common species around these parts: 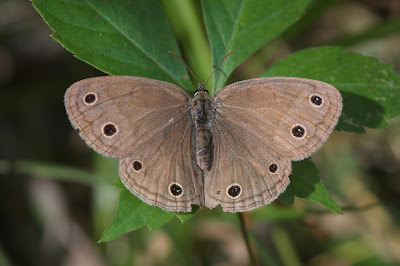 Although they're mostly a woodland edge species, they definitely like to open up and sun themselves in clearings, like this one is doing: 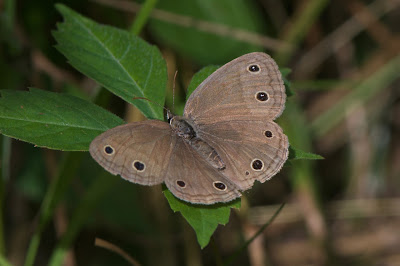 Getting sick of brown butterflies?  Too bad!  Here's yet another.  I've always been a fan of this striking woodland satyr known as a NORTHERN PEARLY-EYE: 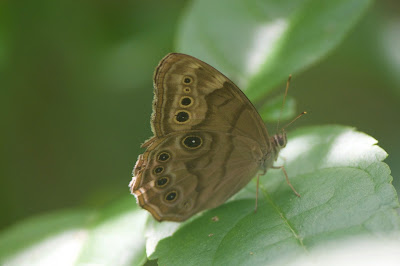 If you scroll up and compare this with the Common Wood-Nymph, you can see the differences in eyespots especially for the forewing below.  Also, the pearly-eyes have a lot more striations, if you will.

Ok, so we're done with butterflies but NOT with the subject matter.  Just now, we had this little interaction with a little brown snake out in the driveway.  Sadly, I'm lacking with my snake skills! 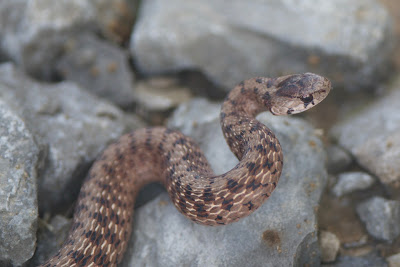 However, several friends online made quick work of my identity conundrum... this is a Brown Snake (Storeria dekayi).  It wasn't very big, maybe 8-9" but that apparently falls in the range of adult Brown Snakes.  Here's another view: 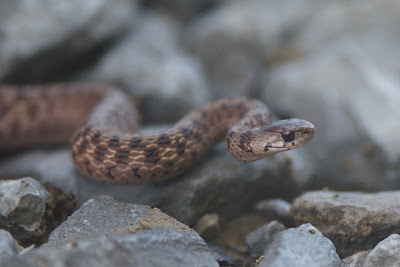 So with that, snails, slugs, and earthworms beware!

We HAVE seen a couple of other snakes around too though including this big boy, I think it's a Black Rat Snake or something similar: 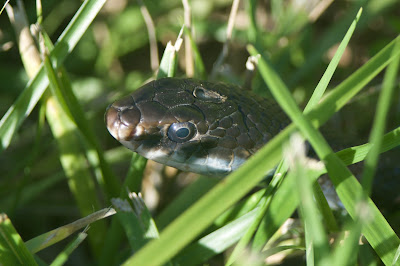 The lack of birds in this post is noteworthy!  In truth, it might not even be July yet but it certainly feels like it.  The sounds coming from outside are often muted these days.  Once in a while we'll hear:

*  A distant chickadee, probably keeping in contact with others in its family group.
*  The cooing of a Mourning Dove, they're rather relentless if you stop and think about it.
*  A chat hollering, whistling, and screeching from the scrub on the field edge.
*  A lawn mower from a distant neighbor.
*  A brave Indigo Bunting giving some quiet song in the afternoon.
*  Resident Kentucky Warblers, notoriously singing once in a while throughout the day.

In fact, it's hard to imagine that all the species that were in full song a month ago are even still here... but they are, they're just busy incubating nests, feeding young, and quietly enjoying the lush deciduous forests that North America has to offer in the summer months.

Speaking of lush forests, I'll leave you with a view from the woods here on the property one foggy morning.  We both really enjoy this image. 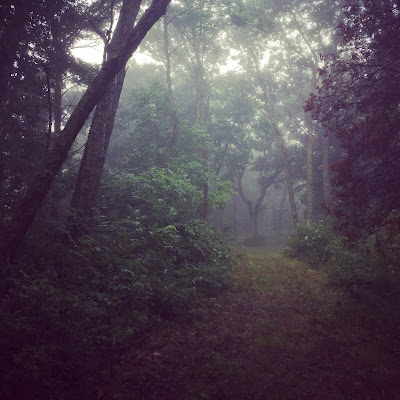