Ashley and I started 2015 in California but certainly didn't end the year there!  We both managed to surpass 200 year birds in Sacramento County in 2015 before we moved in April.  As it turns out, both of us managed to stay in the Top 5 for the year!

But back to a more recent reality.  It's been more than two weeks since Ashley and I ventured up along the St. Lawrence River, into Canada, and spent a day looking for the previously reported SMEW.  The Smew, a species of diving duck, doesn't belong on this side of the Atlantic (or Pacific) and so we were eager to try for this Eurasian vagrant.  However, the bird wasn't seen during our visit.  Boo!  The trip wasn't a waste though, we had another target to key in on.  The story, like most others, starts at a sod farm near a landfill.  We were there to look for the PINK-FOOTED GOOSE that had been seen lately mixed in with a Snow Goose flock.

We pulled up and saw lots of birds out on the sod... but they weren't geese: 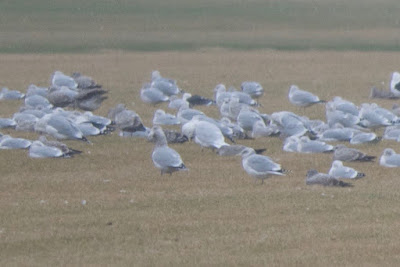 Instead, they were gulls.  HERRING GULLS were the most numerous with fewer GREAT BLACK-BACKED GULLS and singletons of ICELAND and GLAUCOUS (adult; seen in above photo).

As for the geese though, we started to be concerned when the only goose we could find was this lone SNOW GOOSE milling around, looking very lost: 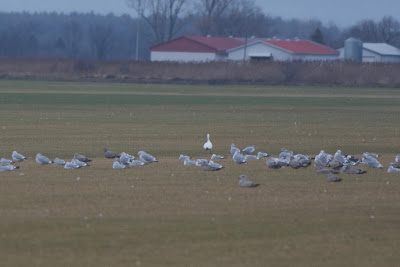 We waited around for a while (other cars full of birders were parked there too, many of them napping) but we eventually gave up and headed back down to the river to look for the Smew some more.

On the drive back down to the river, Ashley spotted this RUFFED GROUSE perched in a tree along the highway.  Kudos to her for picking this out as we drove by at 60 mph! 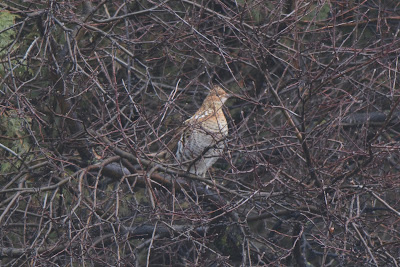 Because we were near the landfill again, we swung by to see if maybe some of the geese had landed there.  Some had... like 10,000 of them: 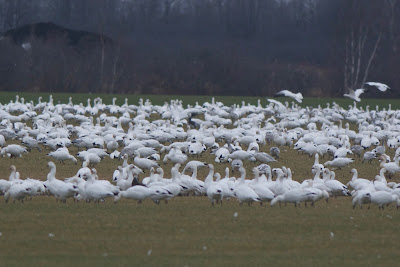 Once or twice they flushed and, let me tell you, it was eye-opening to witness that many large birds spinning through the air right in front of you: 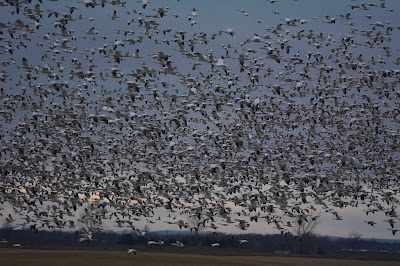 Think you could pick out a Pink-footed in this mess? 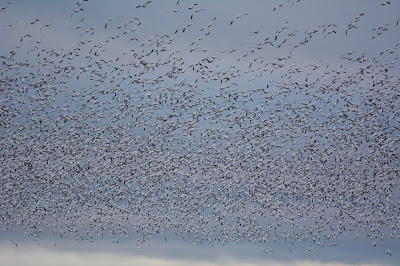 Thankfully, the birds settled down and we started sifting through the many thousands of geese looking for the one, dark-headed oddball.  Of all the birders present, it was Ashley who first spotted it.  Tucked way in the back, she had relocated the Pink-footed Goose, a lifer for her.  These digiscoped pictures barely do the job (but I think they do): 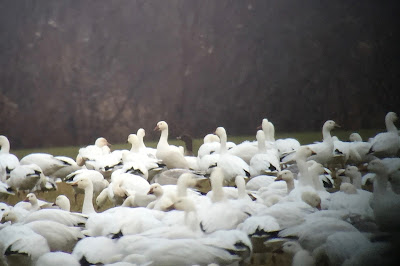 So although we never did see the Smew, we left Canada having at least gotten her a quality ABA bird.

Back around western NY, we continue to bird some of the local areas like Wellsville and Cuba Lake.  On one of our ventures around Cuba Lake, we played around with one of the common winter residents, a BROWN CREEPER.  Here's a photo showing how good the camouflage can be: 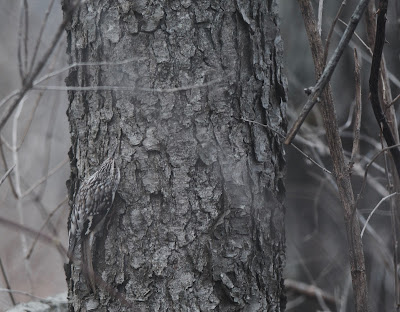 Although they're probably the most common winter bird in these parts, it's still fun to see BLACK-CAPPED CHICKADEES up close and personal.  This one was feeding on a deer carcass on the side of the road (similar to how many feeder birds eat suet): 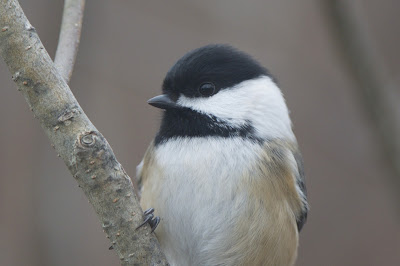 Perhaps the most widespread winter sparrow on the country roads around here is AMERICAN TREE SPARROW.  Pulling up to scrubby areas in the somewhat open valley floors often will produce a flock.  Here's one that stayed still amongst the falling snow: 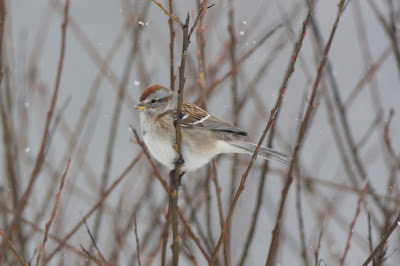 One of the rarer finds on our local expeditions was this GOLDEN EAGLE soaring high above the hills near the Wellsville airport.  This is the first eBird record of this species in Allegany County: 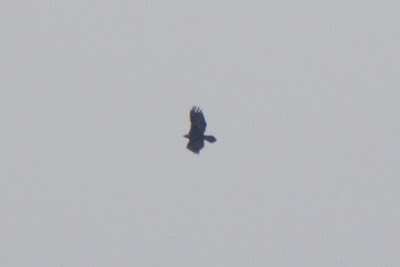 Another highlight happened later that day.  I saw a bird perched on a snag and, with my mind instantly clicking, I pulled over expecting it was a NORTHERN SHRIKE.  But it wasn't.  It was an obvious Blue Jay.  :-(  So I start driving again and not more than a couple hundred meters later, Ashley informed me that there was a shrike on the power lines behind us!  In disbelief, I pulled over and, sure enough, a NORTHERN SHRIKE was on the power lines! 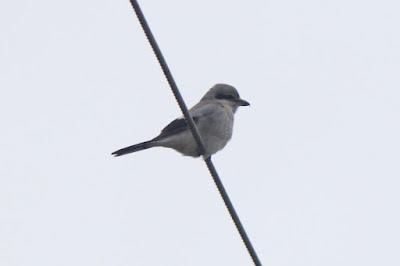 Ha, what are the odds of it happening that way?  Anyway, this was the 6th Allegany County record in eBird.