My earliest eBird records from the Sunshine State came in April of 1996.  I was 12.  Back then, in my naive ways, I viewed Florida as a true tropical paradise with completely unsurpassed birding.  Going to Florida was a BIG DEAL for me back then.  The palm trees you start seeing around the state line with Georgia?  I mean... mind blown.

I mention this because just a week or two ago, on our second trip to Florida within the past month, I visited Merritt Island NWR on the east shore of Florida, the very same place where my Florida birding experience began.  In fact, we even drove the same auto-tour loop that I was driven around when I was just starting out as a youngster.

There's something remarkable about revisiting a place like that 20 years later.  Even though my memories from that early visit are vague, there's nothing vague about seeing many of the same species right outside my minuscule rental car window in 2016.

That auto-tour loop provided me many new birds 20 years ago... things like AMERICAN WHITE PELICAN, GLOSSY IBIS, and WHITE IBIS were being viewed by me for the first time.  I'd never see my "first" White Ibis again.

Fast forward to the recent visit, it's no surprise that we saw many of the same characters.  Here's a TRICOLORED HERON in full evening light: 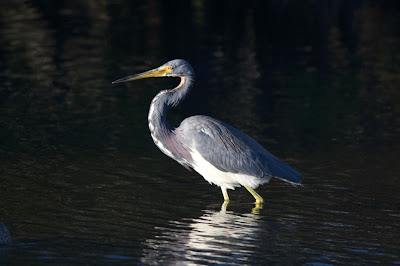 It was kind of special seeing this abundant species here... it turns out that my lifer Tricolored Heron was seen at this very same location on that day 20 years ago.  Maybe that lifer was in the bright light, like above, or maybe it was tucked in a bush, like below: 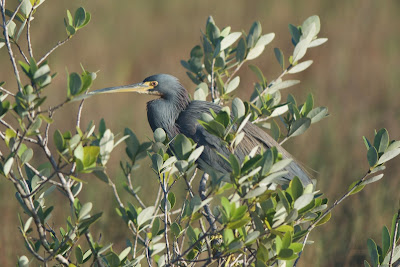 Not as showy but probably just as interesting a species, we saw this WILSON'S SNIPE sitting motionless, banking on its dull plumage to keep it hidden: 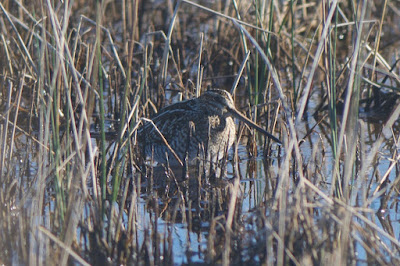 A lot more noticeable was this small group of HOODED MERGANSERS keeping an eye on the auto tour vehicles creeping around: 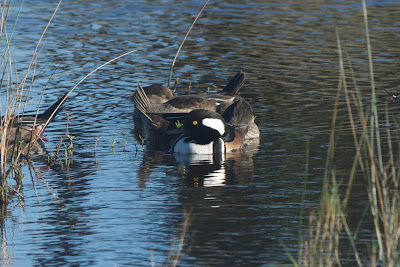 Believe it or not, my lifer AMERICAN COOT came 20 years ago in Florida as well.  This photo shows you... well, a lot of coots: 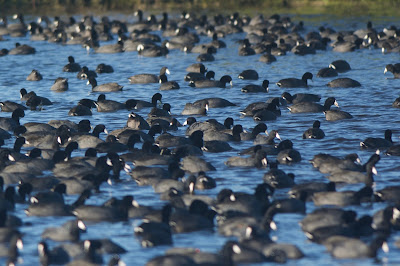 The ANHINGA (a name from the Brazilian Tupi language meaning "devil bird" or "snake bird") is a familiar sight in the south: 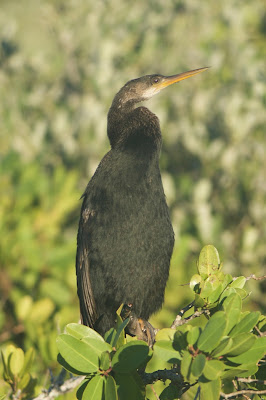 But did you know that Anhingas lack external nares (nostrils)?  Look again.  It's true, and they only breathe through their epiglottis.

BLUE-WINGED TEAL were abundant as we made our way around the auto-tour loop.  I can't complain about the light either; they simply glowed: 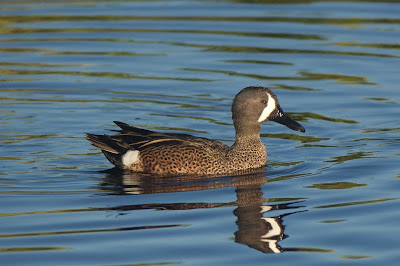 Because we were in "wandering mode", we also ventured farther south on this latest trip.  One such stop was at the Everglades National Park... cuz... why not?

On the way in, at the "flycatcher corner" right outside the park boundary, things were hopping with activity.  It hosted a couple of species that many people don't associate much with the eastern US.  One such example were the two WESTERN KINGBIRDS hanging out there on the power lines: 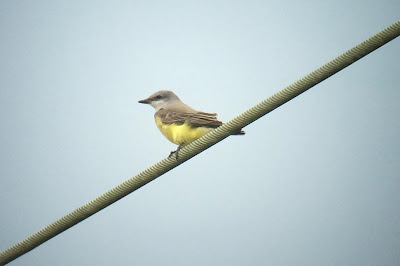 Also present, and not quite as uncommon in south Florida in the winter, was a SCISSOR-TAILED FLYCATCHER or two.  Any day with these graceful flyers should be a good day: 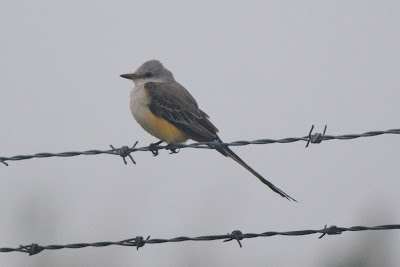 We didn't stop there though.  If we're all the way in south Florida, why not venture down into the Florida Keys?  We did just that.  Here's a view on a cloudy and rainy day at Bahia Honda State Park: 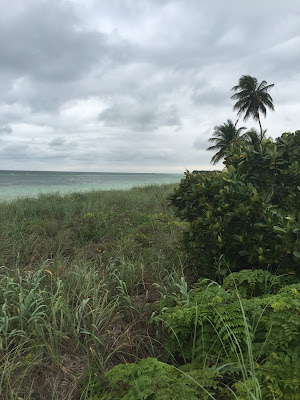 The wind and rain really did hamper our efforts though.  Even these SHORT-BILLED DOWITCHERS and WILLET at Bahia Honda were looking rather unimpressed with the weather: 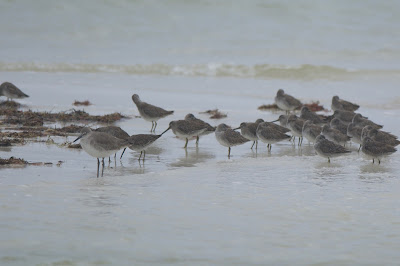 Remember, if it's a WILLET that's wintering here in the US, it's almost certainly the "Western" subspecies (Tringa semipalmata inornata).  The Willets that breed on the East Coast are a pretty different beast (and they don't winter in the US).

This bird wasn't on the ABA checklist when I started out birding.  It's a COMMON MYNA, a now-common established exotic found in Florida.  Some exotics in Florida aren't super easy to find... but this isn't one of them.  This one was strutting about a gas station in Florida City, picking at smooshed trash: 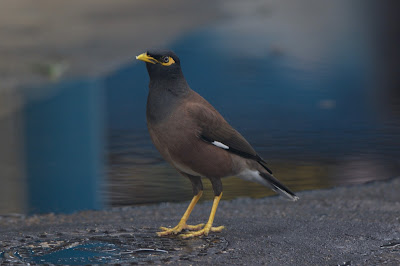 All this driving lately has definitely translated into many more county lists!  Keeping tabs of all the birds in drive-through counties is both a) overwhelming on long drives and b) kind of labor intensive with the prep.  However, I'm happy to just so that I can see my paths across the country taking shape.  Here's a cut-and-paste version of my latest eBird county totals: 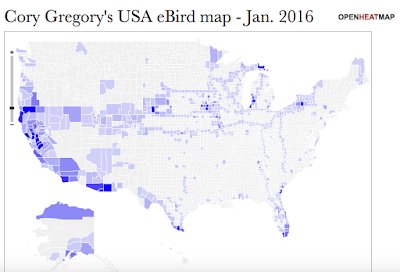 You can see now two different paths to Florida from NY; one through OH, TN, KY and another through SC, NC, VA, and WV.  I also can see more counties in Wisconsin from a SE --> NW sweep we did through the state lately.  Additionally, I'm seeing more shades around NE Ohio and Duluth.  As of yesterday, I now have lists for 676 counties/parishes/census areas/boroughs in the US and 10 in Canada (totaling 686 in all of the ABA area via eBird).