Oh Duluth, what have you done to me?

Wrapped up somewhere in the whirlwind of travels we've undertook so far this year was the long haul drive to Duluth, Minnesota from New York.  Our goal was simple... we wanted to see the long-staying IVORY GULL which would be a lifer for both Ashley and me.

We arrived at Canal Park but upon exiting the car, we were greeted by -15 temps and windchills dropping to about -25.  Besides all boogers instantly crystalizing in what I was suppose to be breathing through (a red lump of flesh known as a nose), it was a constant battle to stay warm for very long.  And to summarize the 48-hour visit to the frozen north... we missed the target!

That's right, the Code 3 arctic gull was present every day up until the night we arrived... and then it was gone.  Un-freaking-believable!

But, we tried.  We stood there, froze, ran to the car to warm up, got out, froze again, got in the car, got out, got cold, rethought our plan, got in car, etc.  In the midst of all that, I demanded that my last working finger push down on the camera shutter button a few times.

One of the things captured was this ICELAND GULL: 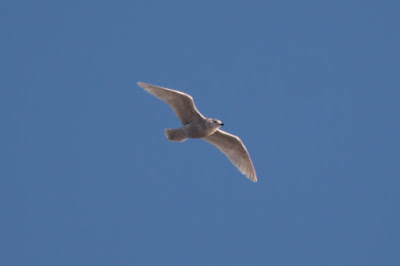 I feel like I should mention, in my old curmudgeon ways, that there is no such species called a Kumlien's Gull.  Nope!  There IS such a thing as a "Kumlien's" race of Iceland Gull though!  Grumble grumble.  Moving on...

In the remaining open water by the park, this GREATER SCAUP was cruising around with some COMMON GOLDENEYE: 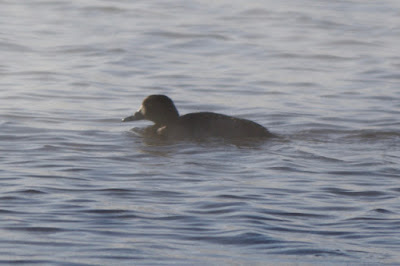 Of course, it's flagged in eBird (it's January after all) and so I embedded it in my checklist (the photo, not the bird!)  So gaze upon it in all its beauty!

I will say that Canal Park provided a unique chance to look directly down at AMERICAN BLACK DUCKS: 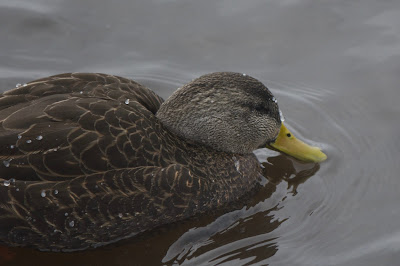 Or maybe it's a Mottled?

Several birders were trying to stir up some gull activity by chucking bread out to the hardy laridites.  This RING-BILLED GULL, one of only a couple present this late into the winter there, was so shocked by the absence of the Ivory that it gasped and lost its bread: 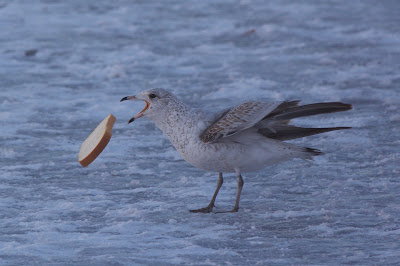 As dusk approached, it was dawning on us that the Ivory was MIA.  We decided to bail for a few hours and drove up to Sax Zim Bog (excuses just to warm up??).

"The bog", more magical than the name implies, was refreshingly familiar to Ashley and I.  When we lived in Iowa, we made several trips up to this famous-for-owls hotspot NW of Duluth and now we were back!  We didn't have any set targets on this particular side-trip, we just wanted to drive around to see what we could.  The first highlight came pretty quickly, a small flock of GRAY JAYS moving through the woods: 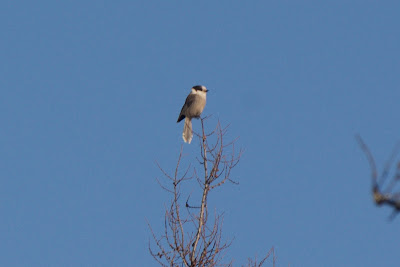 Next up, we visited the feeders at the visitor center (which we had never been to, oddly enough).  A large flock of COMMON REDPOLLS was present along with a colorful group of PINE GROSBEAKS.  Here's a male grosbeak on the left with a camera-shy Common Redpoll on the right: 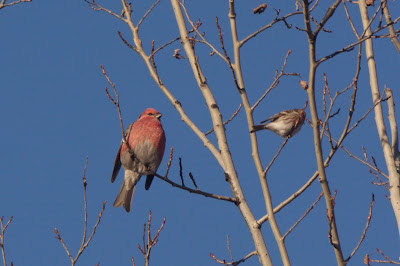 Shortly after, we met a couple of birders down the road who had found a BLACK-BACKED WOODPECKER which we were able to enjoy as well.  These denizens of the northern spruce bogs have always been one of my favorites.  The thrill of trying to locate the source of the tap tap-tap tap-tap-tap tap tap-tap in the middle of a cold and quiet northern bog is always something I'll enjoy.

We also found a very distant NORTHERN SHRIKE perched at the tip-top of a tree, as the species habitually does: 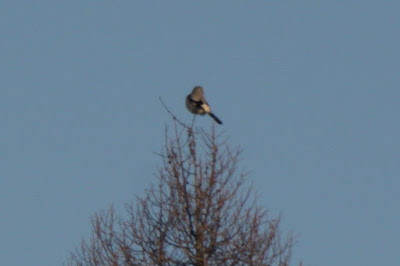 However, the #1 bog highlight for us wasn't a bird sighting.  It happened when we looked down a deserted side road and saw a huge GRAY WOLF looking back at us!  Woah!

I lunged into the backseat to find my camera but by the time I emerged with it, the wolf had scampered off.  I tracked down... the tracks; here's mine on the left, the wolf's on the right: 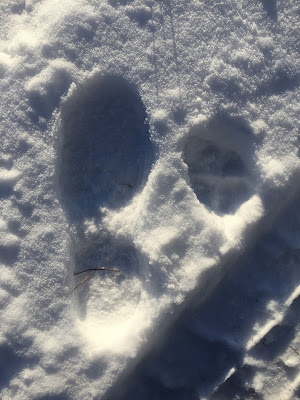 We returned to Canal Park hoping the gull had returned... but it hadn't.  We drowned our sorrows, as one does, at the local Dunkin' Donuts.

The next morning, same story: NO IVORY GULL.  We instead went to go look for the GYRFALCON that had been present in Superior.  Well, we missed that too.  Fantastic!  We're on a roll.

We stopped at the Superior airport and, would you believe, this target actually worked out!  It was, of course, a SNOWY OWL: 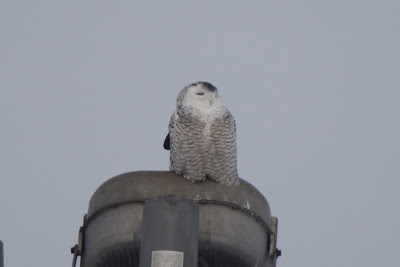 I like Snowy Owls.  Who doesn't?!  Although I consider myself decently familiar with them (eBird lists 79 different days that I've seen at least one), it was still nice to see this northern species again! 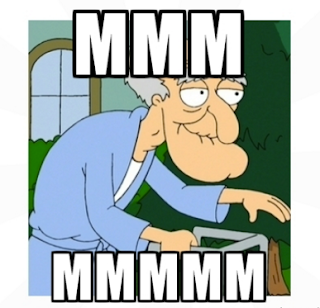 No no no, not that one... this one was looking a bit cold and untalkative: 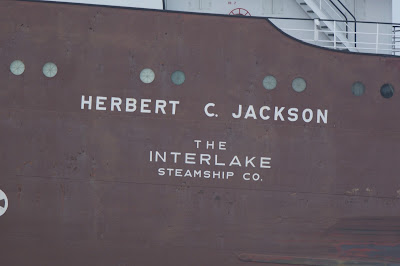 I call him an "old friend" because I scoped this ship passing by Whitefish Point in 2007 when I worked as a waterbird counter at Whitefish Bird Observatory (and because I was bored out there from time-to-time, I kept a list of ships I saw).

So yeah, anyway, that was our quick trip to Minnesota.

OH!  But this story wouldn't be complete without a very important postscript.  Get this, the Ivory CAME BACK... but of course, we were in Texas or something.  Oops, I just gave away the topic of my next post.  Stay tuned!