The past two days have been way more interesting than I thought they were going to be!  True, the Eurasian Hobby was never relocated (bummer for a few of us), but other than that, things got goofy.

It started yesterday when Susan, Ashley, and I were driving northeast through Novastoshna.  Although we drive the roads here on St. Paul every day, it's not that often we see something that obviously doesn't belong.  However, that's what happened when we caught sight of a tiny greenish bird that had bumped off the road.  After pointing and proclaiming "good bird", we stopped the van and hopped out.  Thankfully, the bird flew across the road in front of us and landed on a dune ridge.  Then we heard it.  It sounded like a kinglet... but not the Ruby-crowned kind!  It took several minutes to find the culprit but we eventually succeeded in unearthing a very secretive GOLDEN-CROWNED KINGLET: 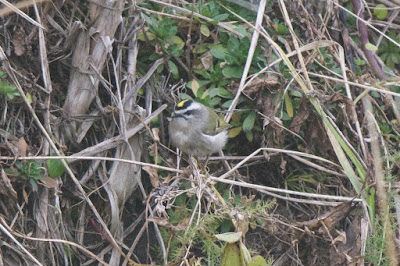 It's a quality find out here, actually.  This was the 7th record ever for the Pribilofs and the first since 2011.

As it so happened, we weren't done with kinglets for the day... we found this RUBY-CROWNED KINGLET in the main crab pots a few hours later: 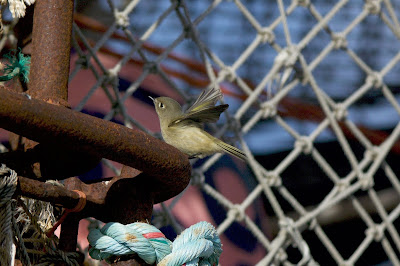 Always a nice thing to see, we stopped and watched this very white SNOWY OWL that was perched on a hump near the Coast Guard Station: 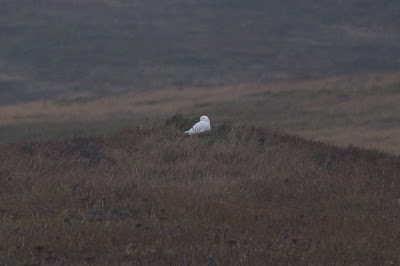 Little did I know that the next day was going to have even more surprises!  Ashley and I decided to drive roads in the wind and rain this morning and it paid off with this VARIED THRUSH near the Zapadni area: 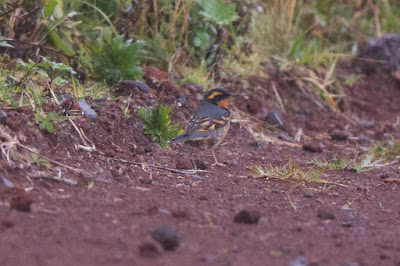 This was the 12th Pribilof record (and a new island bird for us).

However, the biggest surprise was DEFINITELY this next vagrant.  Ashley and I were driving alongside Webster House this morning when she mentioned something about a woodpecker.  It took a second to sink in but when I saw what she was pointing to, I stopped the van, put my bins up, and instantly dropped them and reached for my camera instead.  Clinging to a post behind the house was a little dracula-looking thing: 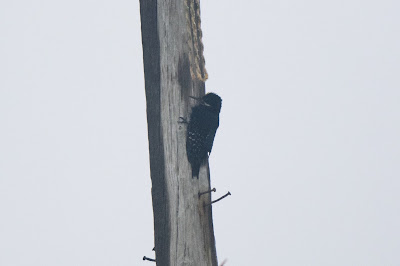 We could NOT believe our eyes, it was a freaking BLACK-BACKED WOODPECKER!  After we snapped some pictures, it randomly flew off (it was being buffeted by a 30 mph north wind): 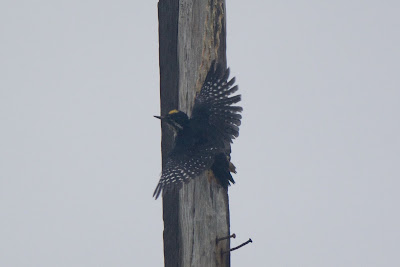 It flew out of view towards the Webster Celery patch: 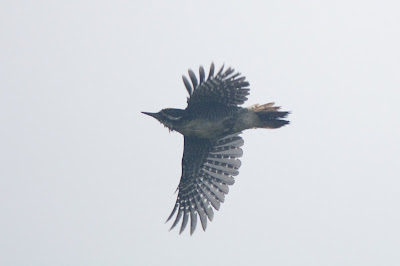 And just like that, we had one of the biggest surprises of the entire season.  This was not only the first record for the Pribilofs, but also the first ever for the Being Sea region.  Take a look at what the all-time records look like in eBird: 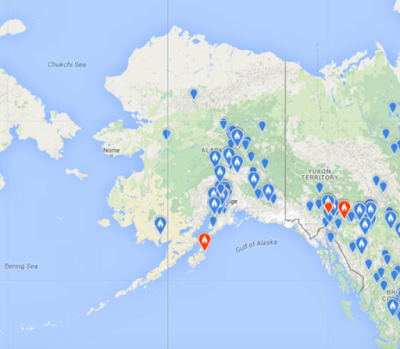 When this recent sighting gets displayed, it will be the westernmost record in the world of this largely non-migratory species.

Even without vagrants, I must say I'm a huge fan of the fall evenings here on St. Paul Island.  Here's the upper cut of the quarry (where the Pallas's Rosefinch was found earlier this fall): 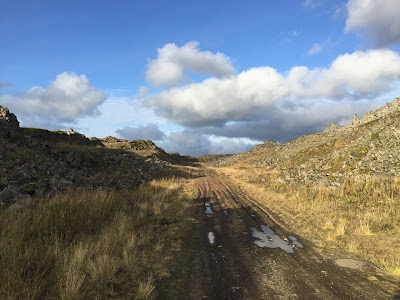 ... and here's a panoramic view of Lake Hill, an extinct volcano with a lake in the crater:

From a different angle, and in evening light, the crater glows (but not in a scary way):