The past few days have seen a marked increase of BRAMBLINGS on the island.  With daily counts reaching upwards of 13 birds, these Code 3 finches are quickly becoming commonplace.  Here's one on the north side of Hutch Hill: 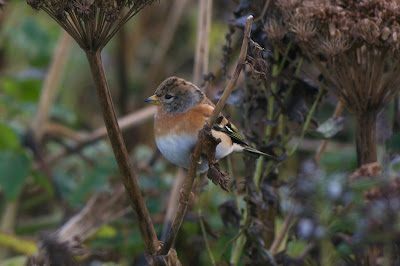 Before you think that's mind-blowing, remember that our daily counts of BRAM last fall topped 40 birds!  In terms of Asian vagrant passerines, Brambling is indeed the lowest-hanging fruit.

Compared to last fall, SKY LARKS are more reliable on the island this time around.  We've seen as many as 3 in a day and at least 1 has been seen almost every day for the last week.  Here's one near Hutch Hill that was actually giving little song snippets between the usual flight calls (it's a blurry photo but I managed to catch the bill open): 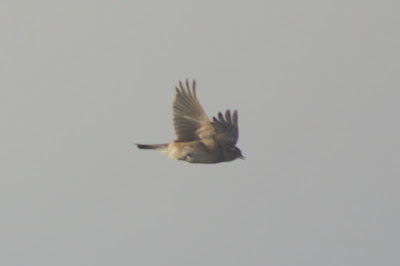 However, the main highlight yesterday was the discovery of a new Code 3 species for the season.  Tom and Doug found a RUSTIC BUNTING on the slope downhill from the upper cut of Polovina Hill.  All groups coalesced, ascended, and then descended to the spot.  It took a couple of sweeps before we were able to flush this secretive Old World emberizid but once it did, most of us got quite decent looks: 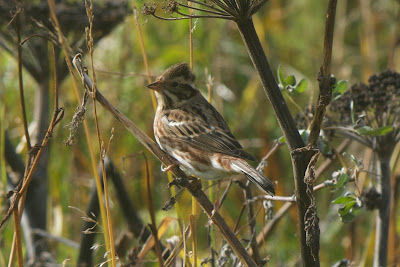 Who doesn't love a vagrant with a semi-crest? 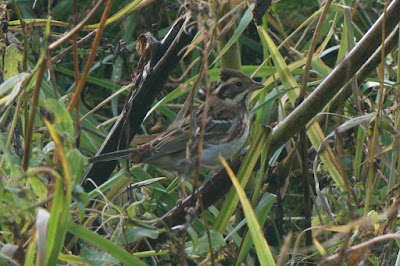 But of course, we wouldn't stop there... we found yet another RUSTIC BUNTING on the top of Hutch Hill later in the day!  This is the first time we've had multiple RUBUs around since 2011.

Another highlight from yesterday was an OLIVE-BACKED PIPIT (Code 3) in the Barabaras Celery patch.  However, in typical fashion, the bird remained very skulky and I couldn't manage any IDable shots.  But hey, it's an awesome species and any day with an OBPI is a good day.

So what was the rarest Pribilof sighting yesterday?  It wasn't the pipit... or buntings.  Nope, it was this NORTHERN HARRIER! 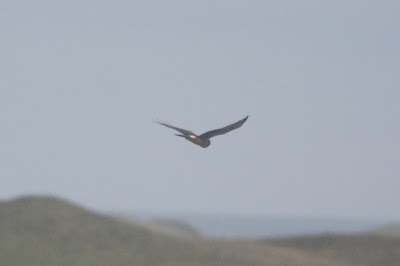 We were lucky to see this bird meander overhead while we were at Polovina Hill doing the whole RUBU chase thing.  Although this is a familiar species for most of us, this is only the 7th record for the Pribilofs which makes it the rarest bird sighting yesterday (relative to here, of course).