By now and if you're paying enough attention (I don't know who would), you'll see that I added a new Code 5 species to the list here on the blog.  Indeed, after some great discussion between experts all over the world, we were able to confirm that the mystery bunting we had was a PALLAS'S BUNTING!  It is the 7th or 8th ABA record and the first for the Pribilofs.  However, the journey to get to that ID wasn't as straightforward as I thought it might be.

First, if you remember, we were able to narrow it down to Yellow-browed, Pallas's, and Reed Bunting based on that very first photo (the one of the tail pattern).  But after that, we were stuck.  Thankfully, our last encounter provided photos with just enough detail to study it further.

I admit that I thought it was a Reed Bunting when I first took the photos (in looking back, I got hung up on the photos of the perched bird).  Instead, as Killian Mullarney illustrated with the below photo of our bird in flight, you can see the lesser coverts and that they're quite plainly gray (a mark of PALLAS'S BUNTING)! 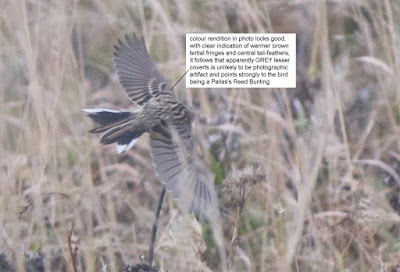 Comparatively, all ages of REED BUNTING would have noticeably rufous lesser coverts.  And honestly, if you want this identification boiled down that much, that about settles it between REBU and PALB.

But here's another photo anyway... you can see the gray lesser coverts in this photo as well (with an insert comparing the Gambell PALB: 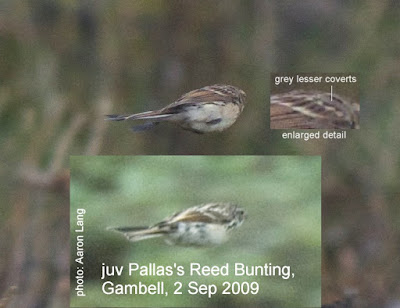 Last but not least, he shared these photos of buntings in the hand taken by Mats Waern; Pallas's on the left, Common Reed on the right: 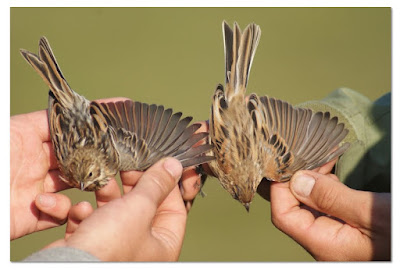 Another point of evidence in favor of PALLAS'S BUNTING was the call note.  I took a movie with my phone of the bird flushing and after further review, I found I had captured something at the tail end of one of my videos!  I stripped the audio from the movie and Magnus Robb made sonograms of the call note and compared it with other known PALBs.  Take a look; here's the call note from our bird on top with examples of other PALBs below: 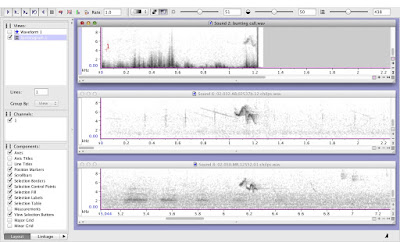 Perfect match!  Especially when compared to the sonogram of Reed Bunting that didn't match that at all.

So after it was all said and done, I owe a big shout out to those guys who helped in the identification of this rarity (namely Killian Mullarney, Lars Svensson, Nial Moores, Paul Holt, Paul Leader, and Magnus Robb).

But now that the dust (mist?) has settled from our 5 month guiding season on St. Paul, here's a wrap-up summarizing some things.  I did the same kind of summary after last season but this year I have the added benefit of being able to point to last season's numbers as well!

I ended my time on St. Paul with 162 species this season which is 1 more than my total from last year!  However, there was a different variety this year and I managed to add 36 new birds to my island list bringing it to just a few shy of 200.

I ended with 7 new ABA birds and although that was lower than what I expected, I can't complain about the quality at all!  Plus, and this is key, I was very fortunate to find every single one of those lifers myself.
Here's a list of the Code 3-5 rarities we had:

As it was last year, it's quite a haul and I challenge any Lower 48 state to come up with a comparable list for any 5 month period.  Even California.... although California is 3898x bigger than St. Paul Island.  :-)

I should also add that in that list of Code 5 species is a species that had never been seen in the ABA area before!  It was a special treat to be a part of that encounter.
Numbers aside, I really do feel quite lucky to have had that opportunity.  I want to thank those of you who made it happen, made it more fun than it might have been, and put up with me and these blog posts.
Posted by Cory J. Gregory at 10/21/2015 03:16:00 PM