I spent a fun day out with a big group yesterday here on St. Paul Island.  The highlight for me was flushing this GRAY-CHEEKED THRUSH up off the east side of Hutch Hill: 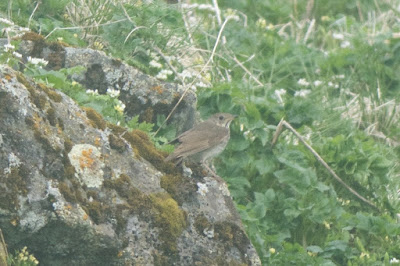 You can imagine how excited we get when we see a drab bird flush up from a hillside that usually only has longspurs and Snow Buntings on it.  Even though this isn't a Rufous-tailed Robin (like this hill has hosted before), I was quite pleased to stumble upon this rare spring migrant (I believe this is only the 5th spring record of this species).

However, I imagine the highlight for everyone else in the group was something completely different.  Even though the area hadn't been checked for many days, I figured it was worth a try to see if any of the COMMON CUCKOOS remained.  We formed a long line and swept the area (as we do when we hope to flush up rarities).  Suddenly, yep, a COMMON CUCKOO flushed up: 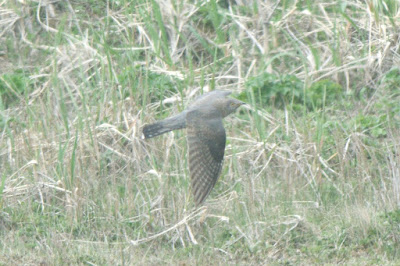 These birds are nuts.  I mean, most people are used to our Yellow-billed and Black-billed cuckoos here in the US but these vagrants are gray birds and BIG.  Like... falcon big.  If you see one fly by, as we did, you really might think it's a falcon or harrier or something.  Some of the cuckoos we see here are damn near impossible to identify though.  Caution must be exercised when deciding between Common Cuckoo and Oriental Cuckoo; the latter being much rarer here.  One of the helpful angles to photograph is the underwing... like these: 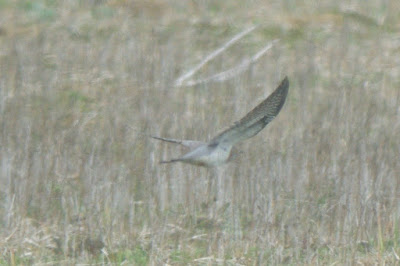 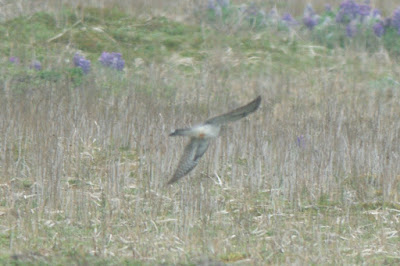 In the end, sadly for most, this does look to be a Common Cuckoo (but still a fun bird!).  Notice mostly the vent (which does look to be pure white), the underwing pattern (which doesn't look contrasty enough), and the very sparse breast barring.

It's worth mentioning that the other guides have stirred up recent sightings like BRAMBLING and an OLIVE-BACKED PIPIT but neither birds were subsequently seen.  So, until next time... bird.
Posted by Cory J. Gregory at 6/16/2015 03:31:00 PM