I'm not sure if it's hard to believe or not but the fact remains that we've already been on St. Paul Island for a month.  Our season runs for five months so here's to the next four!

We've had some very solid days already this spring although maybe none reaching quite the level of June 2 of last year (checklist here).  However, this spring trumps many of the past springs so hey, I'm happy with it.

All three of us guides here have spent considerable time at Whitefish Point in the UP of Michigan.  Two of us have even lived in Berrien Springs, Michigan for a considerable chunk of our lives.  It's funny how the Pribs have played into things.

It was that WPBO connection that I thought of when I saw this flying over while we walking Antone Slough: 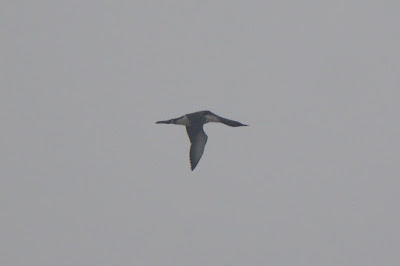 Anyone who has spent much time lakewatching in the Great Lakes probably has that silhouette etched into their wind-blown minds.  That RED-THROATED LOON was only my second of the season so far (I've seen more Yellow-billed than any other loon species so far and I think Common and Arctic are tied with one apiece!).

A big change this season is that I'm living in a different house than I did in 2014.  Ashley and I enjoy scoping Town Marsh and the tubenoses at East Landing from our living room window on a daily basis.  We've also started offering seed to the local rosy-finches in hopes that it might attract an odd stray from Asia.  It actually worked!  The other day Ashley spotted this male BRAMBLING a few feet below our window! 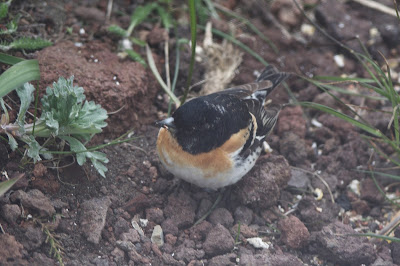 Although our yard list is only at 20-25 species currently, it's refreshing to have species like BAR-TAILED GODWIT, WOOD SANDPIPER, and SHORT-TAILED SHEARWATER on it.  But seriously, and you know this, we're both just waiting for a Eurasian Bullfinch to show up at our seed.

The DOUBLE-CRESTED CORMORANTS continue to be regular this season (St. George has had them too).   Last year we had a couple but this year there are probably close to 5 or 6 and they've remained for quite a while.  Here's a continuing bird, complete with double-crests, at Weather Bureau Lake: 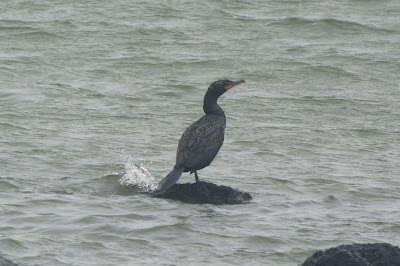 Although it wasn't an ABA bird for her (thanks to this checklist), I took Ashley out to see if we could relocate the COMMON CUCKOO.  We did.  While scoping it, she excitedly exclaimed that it had landed next to another cuckoo!  Whhhattt?!  Sure enough, two cuckoos: 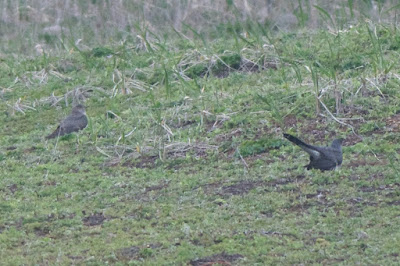 This very much reminds me of last June when we also had two cuckoos hanging out together (albeit in the upper cut of the quarry).  Lest you start to think this is typical, let me remind you that a typical spring here gets NO cuckoos!