Longest day of the year

In some ways, birds that breed in the arctic have a mixed bag.  Relatively speaking, their summers are short (after all, I remember seeing a snow storm in Barrow in early July).  However, the birds manage these summers because each day this far north is long.  Of course, what I really mean is that the sun is visible for a vast majority of the 24 hour period.  In fact, today, June 20, is the "longest day" that we have to work with; the sun will set here on St. Paul Island at 12:20 AM but will come up only 6 hours later.

Because of the long days, birds go into hyper mode to mate, lay eggs, and raise their young.  Because it's truly dark here for just a few hours each night, many birds are able to feed their young almost around the clock.  It's hard to believe but there are already young creatures all over the island right now.  I've seen young Arctic Fox kits outside their dens, the Rock Sandpiper eggs have hatched, young ducklings are waddling about, and even the tiny Pacific Wrens are busily attending their nests.  Speaking of the latter, there has been this busy parent feeding young still in the nest down at Reef: 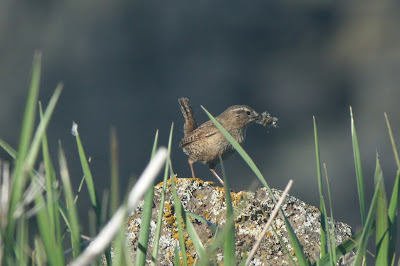 Unlike much of the year, the weather here has been consistently beautiful during the last several days.  The high pressure is sitting right on top of us; there's no hint of rain, plenty of sun to go around, and... well... not much in the way of Asian vagrants.  Oh well!  It's times like these that we shed some layers and try to enjoy the amazing visibility, like this view of Otter Island to the south: 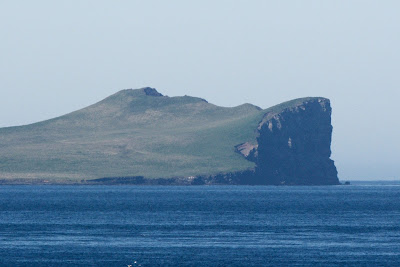 Otter Island is the third largest of the 5 Pribilof Islands (and not one you've probably heard much about).  However, it's still spectacular; the cliff face you can see is taller than any cliff we have on St. Paul Island.

A group and I ventured up to the cliffs at Zapadni Point the other day to scope things out.  We were met with a great showing of alcids like these three auklet species perched together: 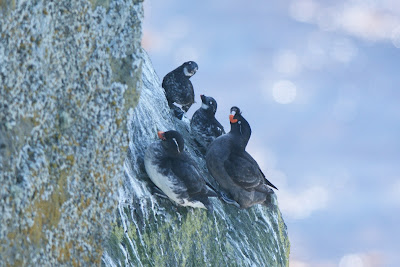 When the sun catches the eye of a PARAKEET AUKLET, it's sure to catch YOUR eye as well: 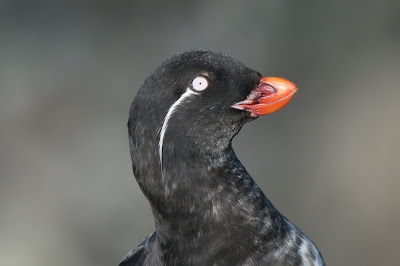 A similar pale-eyed look can be seen on the smallest alcid in the world, the LEAST AUKLET.  This particular one looked just as surprised as we did that the sun was out and shining: 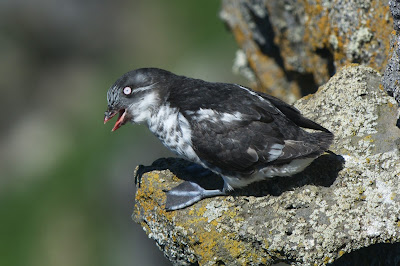 Although this weather isn't necessarily conducive to Asian vagrants, I didn't say that rare birds CAN'T show up.  Case in point: yesterday.  Ashley and I ventured to Antone Wall to scope through seabirds swirling behind a passing fishing vessel but it turns out that we didn't even pay attention to the boat!  As soon as we arrived, we found an interesting alcid swimming just offshore, a CASSIN'S AUKLET! 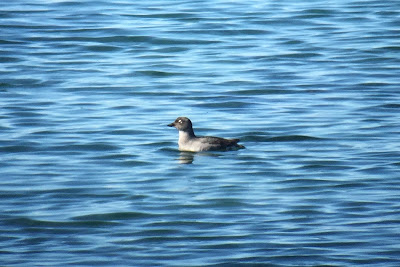 Although this species can be seen in the Aleutians (as well as down the West Coast), they're quite rare in the Pribilofs.  In fact, this represents only the 3rd St. Paul Island record!  Things got even crazier when Scott arrived; we soon realized there wasn't only one, there were THREE of them just offshore at Antone Wall.  I snapped a picture of two together: 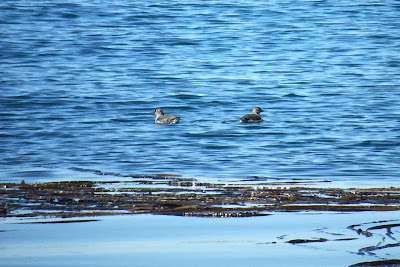 Eventually, pretty much all of the birders on the island got to see these rare (for here) alcids before, rumor has it, they flew to the west and out of sight.

Anyway, hopefully this calm weather gives way to a horrendous storm out of the southwest with ripping 40 mph winds.  :-)  You know me, always the optimist.