Now that late-August is upon us, we've been seeing more changes in the weather which has certainly made the birding more interesting.  At first, we had strong winds out of the east which piled in good numbers of American breeders.  For example, the first day of seeing GOLDEN-CROWNED SPARROWS this fall... nearly half a dozen of them showed up at scattered locations all across the island.  Here's a distant picture of the first one I saw at the diesel tanks (found by DG): 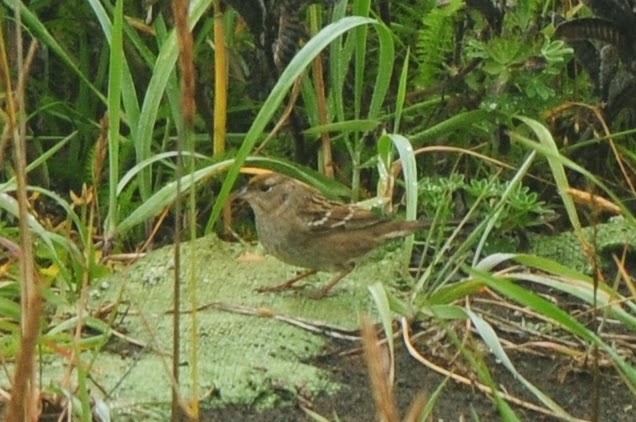 That storm brought in other American birds too like 15 ARCTIC TERNS which were seen both at Big Lake and the Salt Lagoon.  I tried to get some documentation pics of the first one I saw... with limited success: 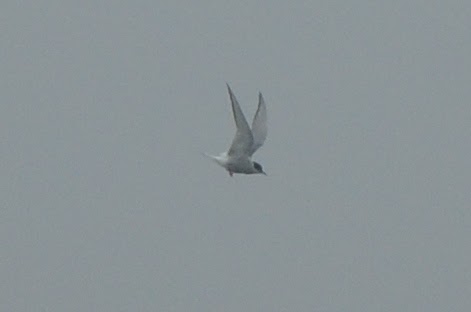 We also had a couple of shorebirds drop in during the rain including an "American" WHIMBREL; only the 2nd WHIM of the year and the 1st of an American race.  Some other typical migrants showed up too like SHARP-TAILED SANDPIPERS (which probably could arrive here on any wind).  Here's an adult at Tonki Point Wetlands: 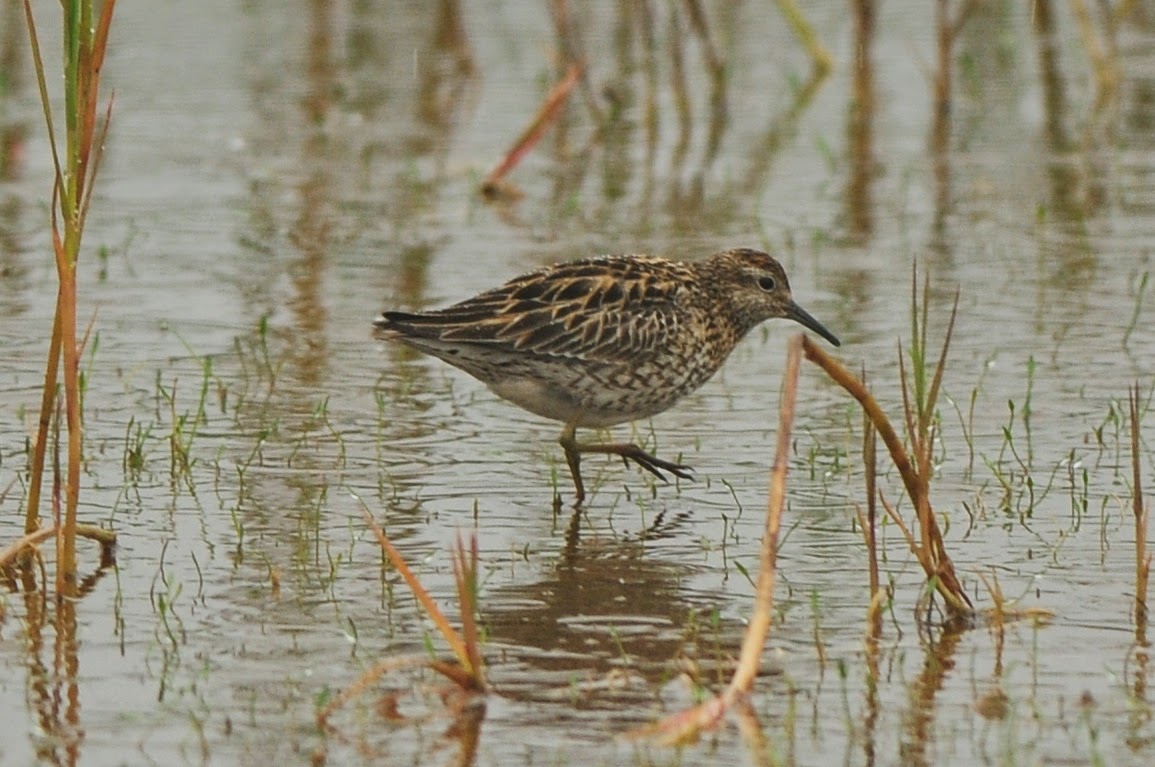 But then the winds shifted, they became strong out of the NW for a day or two which put all us guides on high alert.  Doug was guiding that day and eventually stumbled on a BLUETHROAT which I was able to chase (thanks to their group staying on it for me).  I got some pictures but the bird blends in fairly well; see if you can find it: 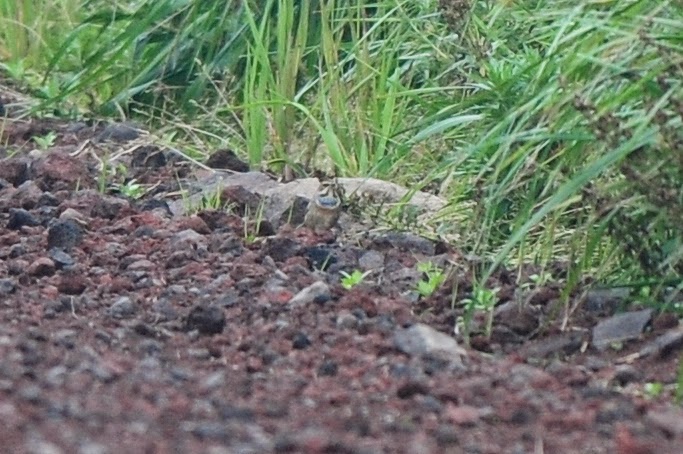 That species was very high on my most-wanted list, partly because I'm slowly-but-surely snagging all the ABA breeding species.  This species (and Arctic Warbler) were at the top of the list although neither of them are completely expected here.  Regardless, I was quite pleased with this new lifer and started charging the beard-trimmer for the immediate and celebratory removal of the 4-week old beard.

The day remained quiet until the evening when Doug's group ventured to Hutch Hill where he found a Code 5 WILLOW WARBLER.  Of course, I was in the shower when the news of this rarity came (again).  Rushing out the door, me still being wet, we rushed to the scene and thanks to Doug for keeping tabs on it, managed to relocate it.  Note the small bill, long pale eyeline that meets over the bill, pale feet, lack of a wingbar, fairly bright yellowish wash to breast, relatively long primary projection, etc: 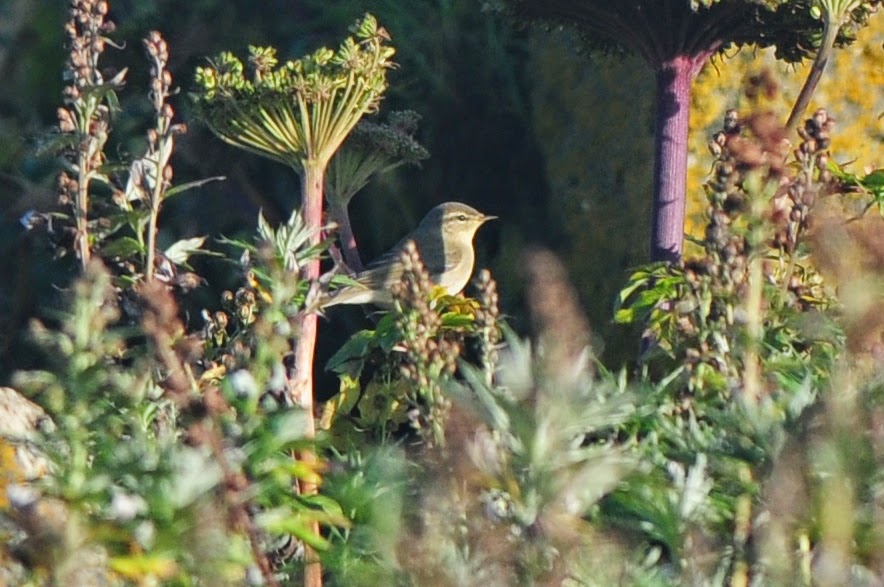 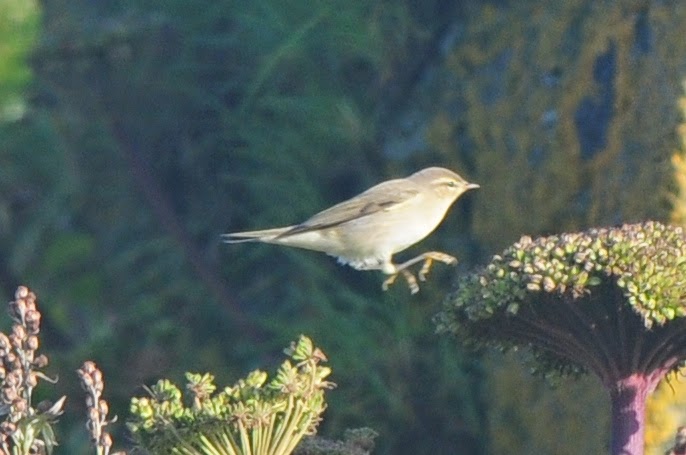 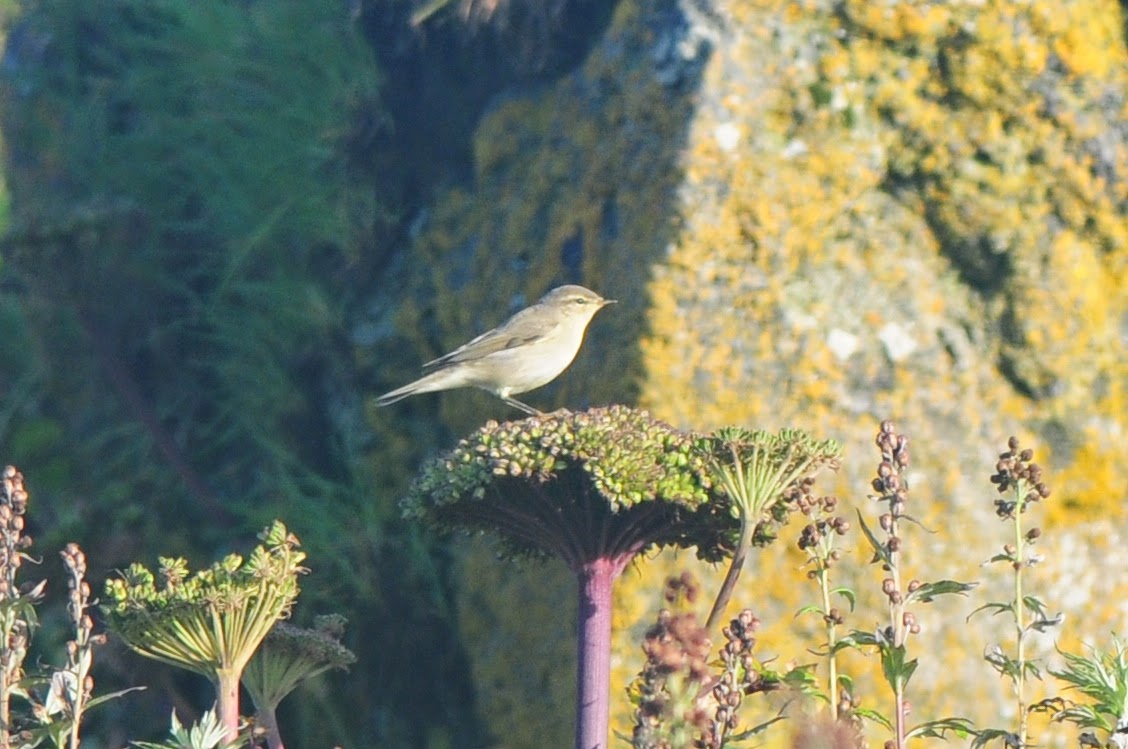 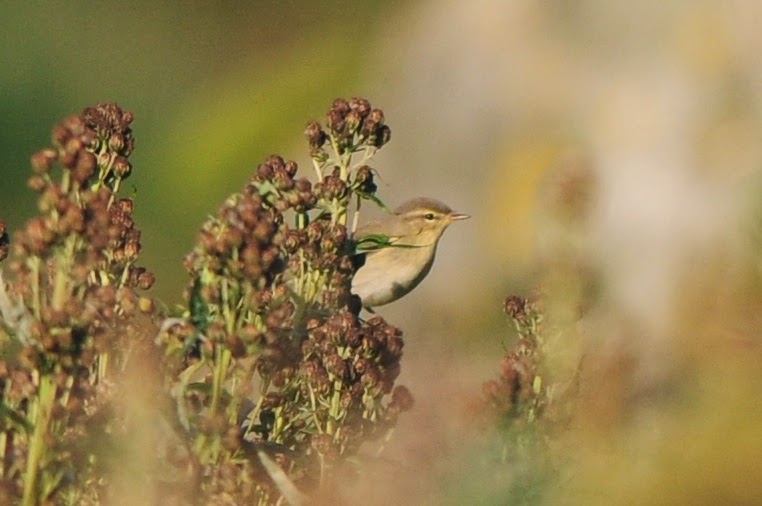 This Old World Phylloscopus warbler has been seen in the ABA area fewer than 20 times (and this particular record represents the 3rd from the Pribs).  In fact, St. Paul Island is the only place this species has been seen away from St. Lawrence Island (also in the Bering Sea).  Code 5 birds are NOT something you come across very often and this bird is only my 7th species with that ranking.

Clearly the winds had brought some new arrivals, some of them very very rare.  This was again confirmed when Doug flushed an interesting bird off the road near Webster House just an hour after the Willow Warbler.  Once relocated, we saw it was a juvenile GRAY-STREAKED FLYCATCHER: 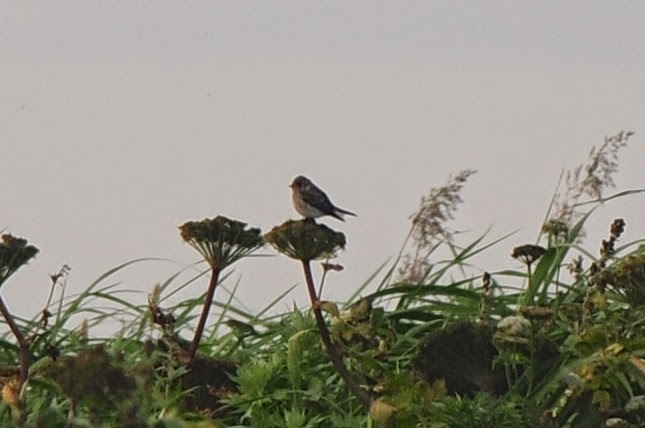 This is another rare vagrant from Siberia, a Code 4 bird.  We all got scope views for several minutes before it eventually vanished.  We walked the celery in that area but didn't see it again.  And with the above picture, before people start babbling incoherent phrases with "Mugimaki" in it, the rich color on the breast is due to the 9 PM light.

So with that closed a fun, rarity-filled day on St. Paul (hopefully the first of many this fall!).  Oh, and in closing, the sunset from town was spectacular too: