I hinted towards a review of yet another Crossley Guide a while back and today just so happens to be the day.  Aren't YOU lucky?  "The Crossley ID Guide: Britain & Ireland", by Richard Crossley and Dominic Couzens, was published in 2014 by Princeton University Press.  It is 301 pages and costs $27.95.

Right-off-the-bat, I have no qualms with saying that this is my favorite Crossley so far (I'll get to the reasons for that a bit later on).

By now, most of you are probably familiar with the typical layout of these guides.  In short, many photographs of the same species are edited and pasted into a one-page layout.  The idea is to show the reader the many types of views one might expect.  For example, here's the layout for European Goldfinch: 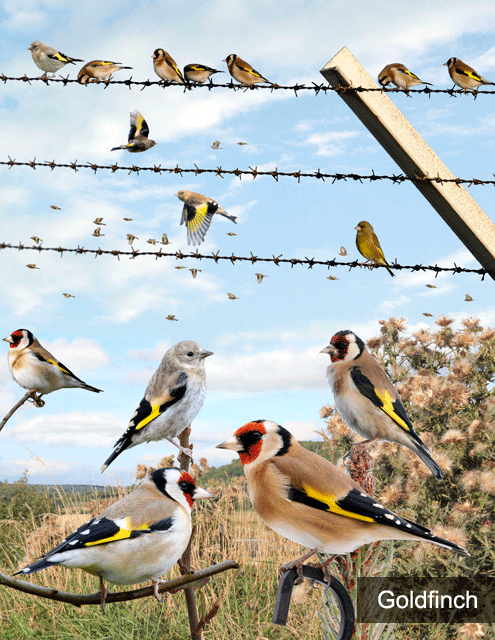 So, naturally, you might expect to see a flock on a fence, on thistles, or on feeder poles.  Well, you get the idea.

Here in North America, we typically don't take shortcuts in labeling bird names.  In Britain, though, be prepared for labels like Goldfinch, Wren, Avocet, Greenshank, Nuthatch, Waxwing, etc. etc.  Of course, this is because they typically only have one of those kinds present.  However, our American Avocets are American Avocets in our bird books too, even if we only have the one type.

In North America, we call birds in the Regulus genus "kinglets".  Not so in Britain.  Here's the text portion and range map for Firecrest:

I enjoy looking at the maps in this book, mostly because I'm so clueless as to what is where!  But, as you can see, they separate Ireland, Northern Ireland, England, Wales, and Scotland.

Oh yeah, what we call loons, they call divers: 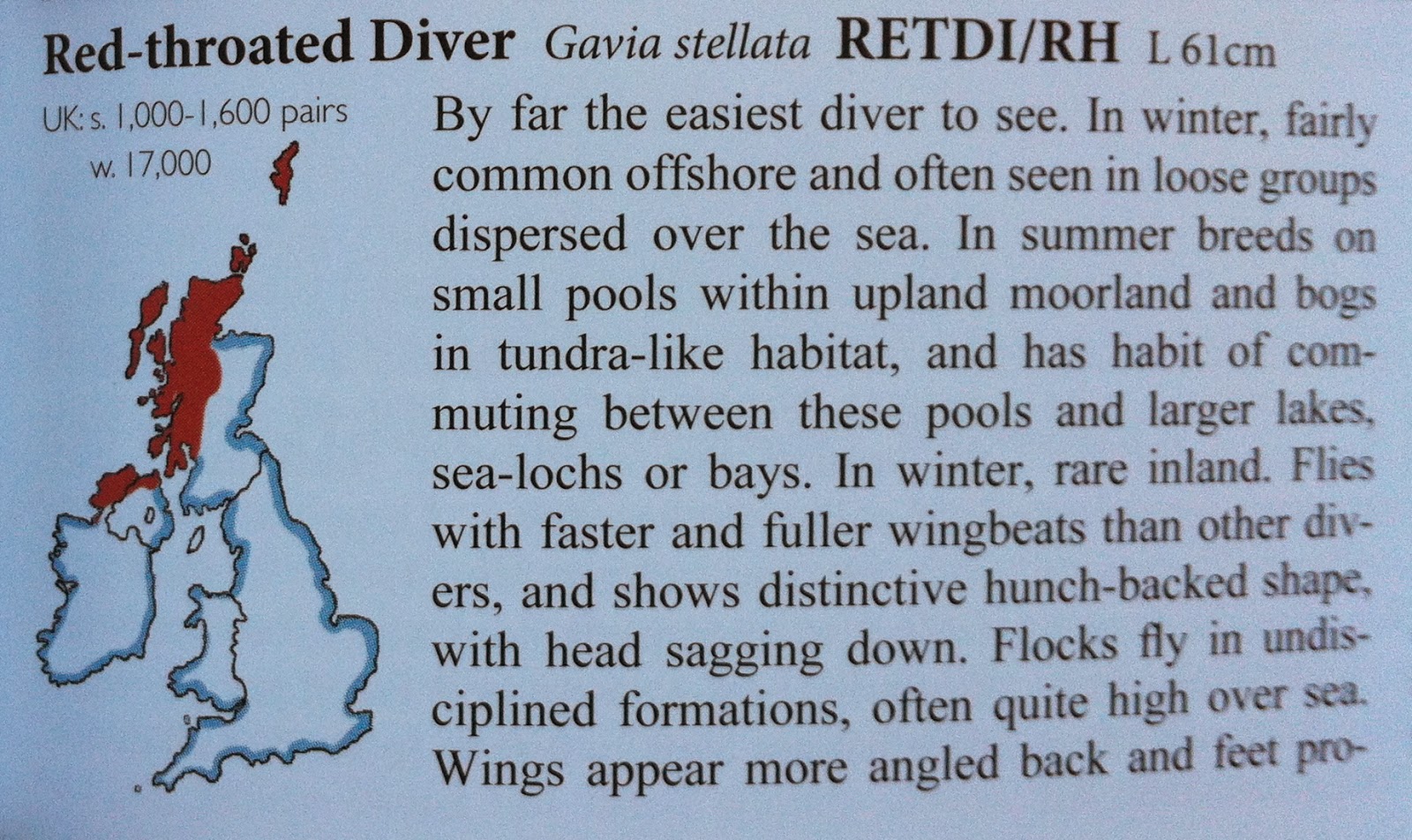 You'll notice some numbers under the name and this is something I do like the idea of.  It first shows the estimated summer population of that species ("s") and then underneath it, it gives the estimated winter population ("w").  Even though they may be rough estimates, part of me wishes all bird books had those data on hand.

But back to the plates, here's another spread, this one for the Blue Tit, a relative of our chickadees: 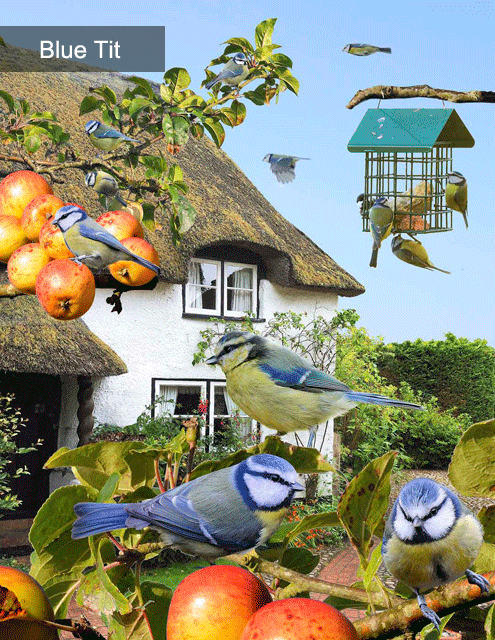 Here's one to test your curlew skills: 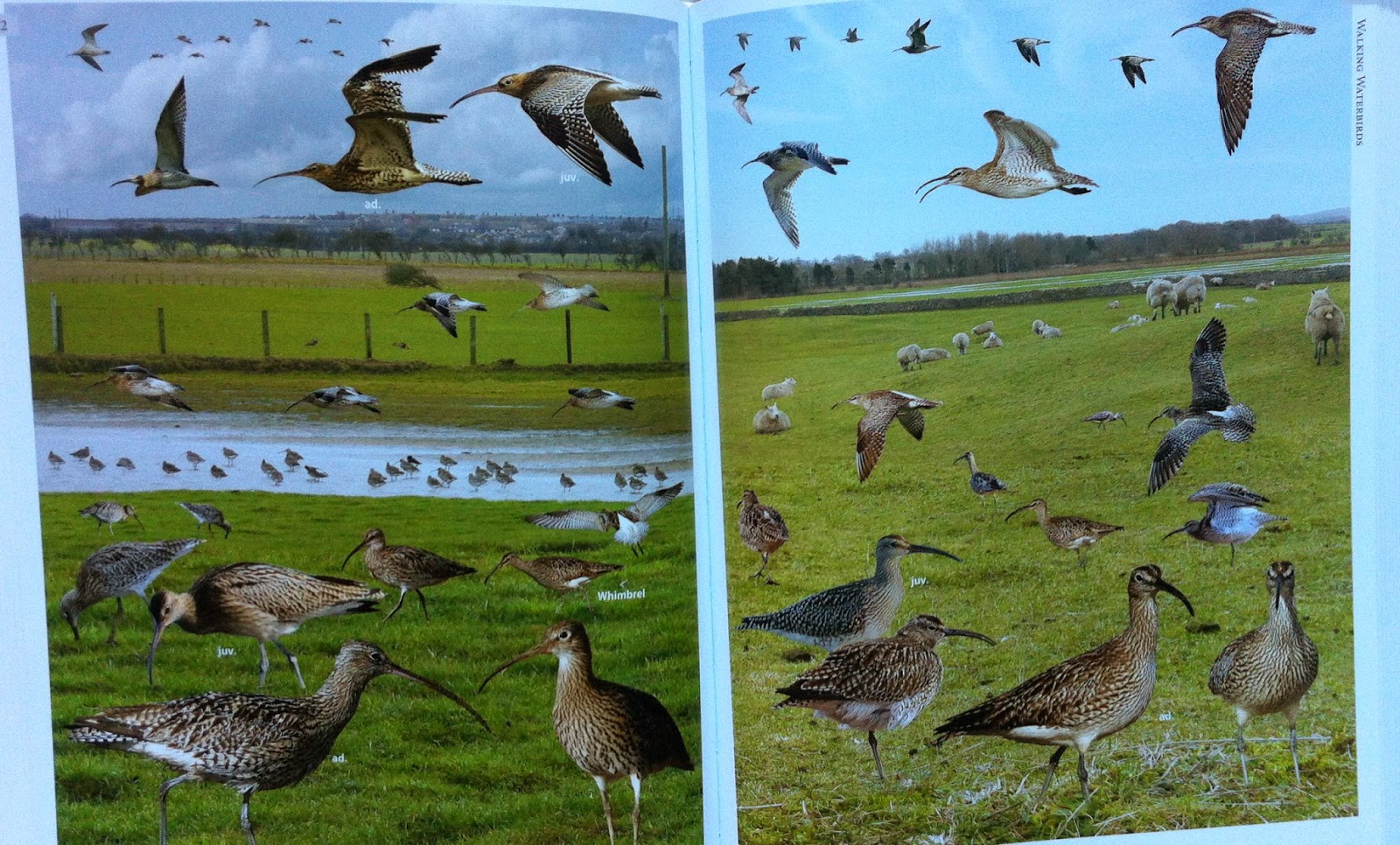 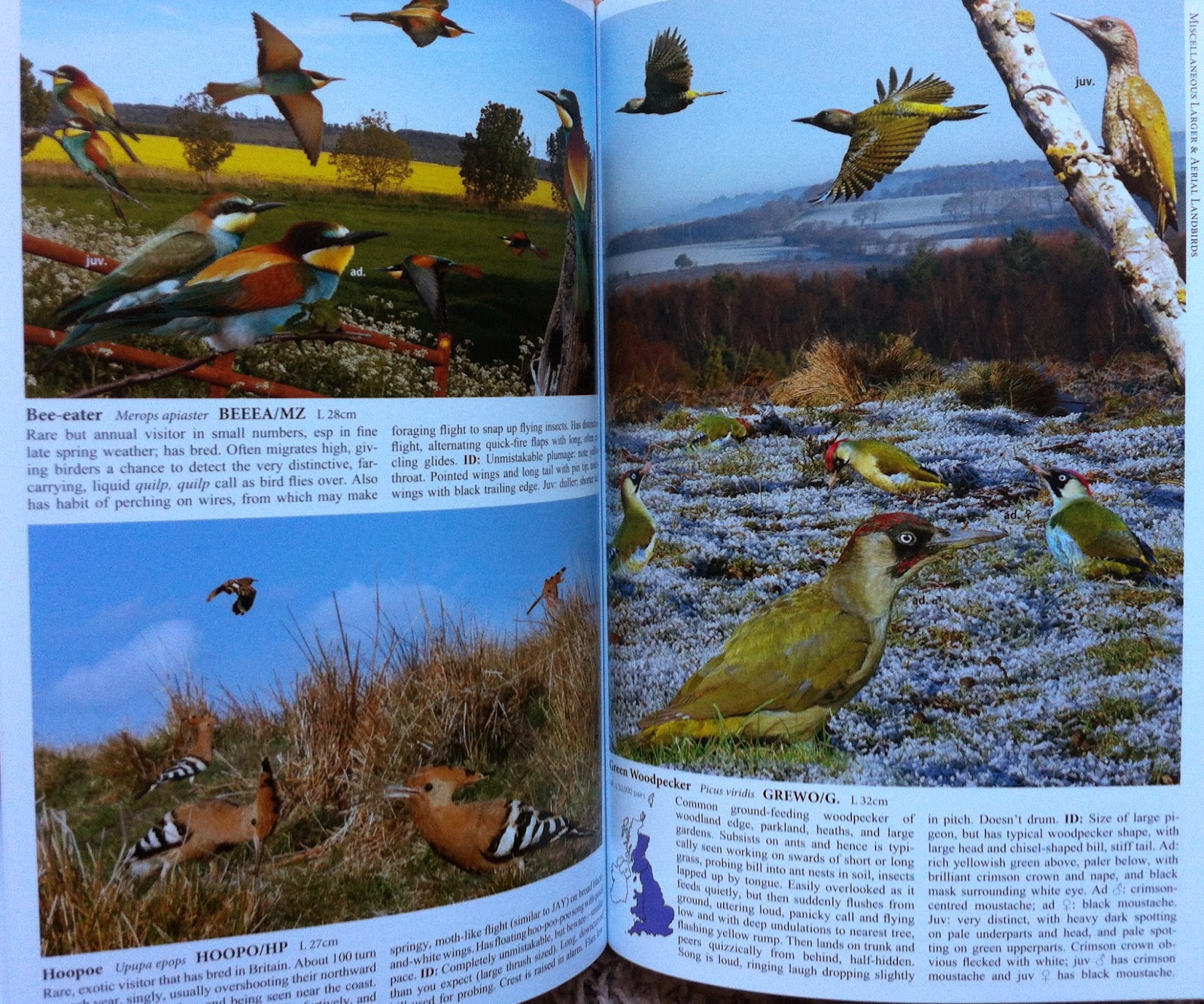 I do say, I'd fancy myself a formal viewing arrangement of this dapper woodpecker along with my tea and crumpets: 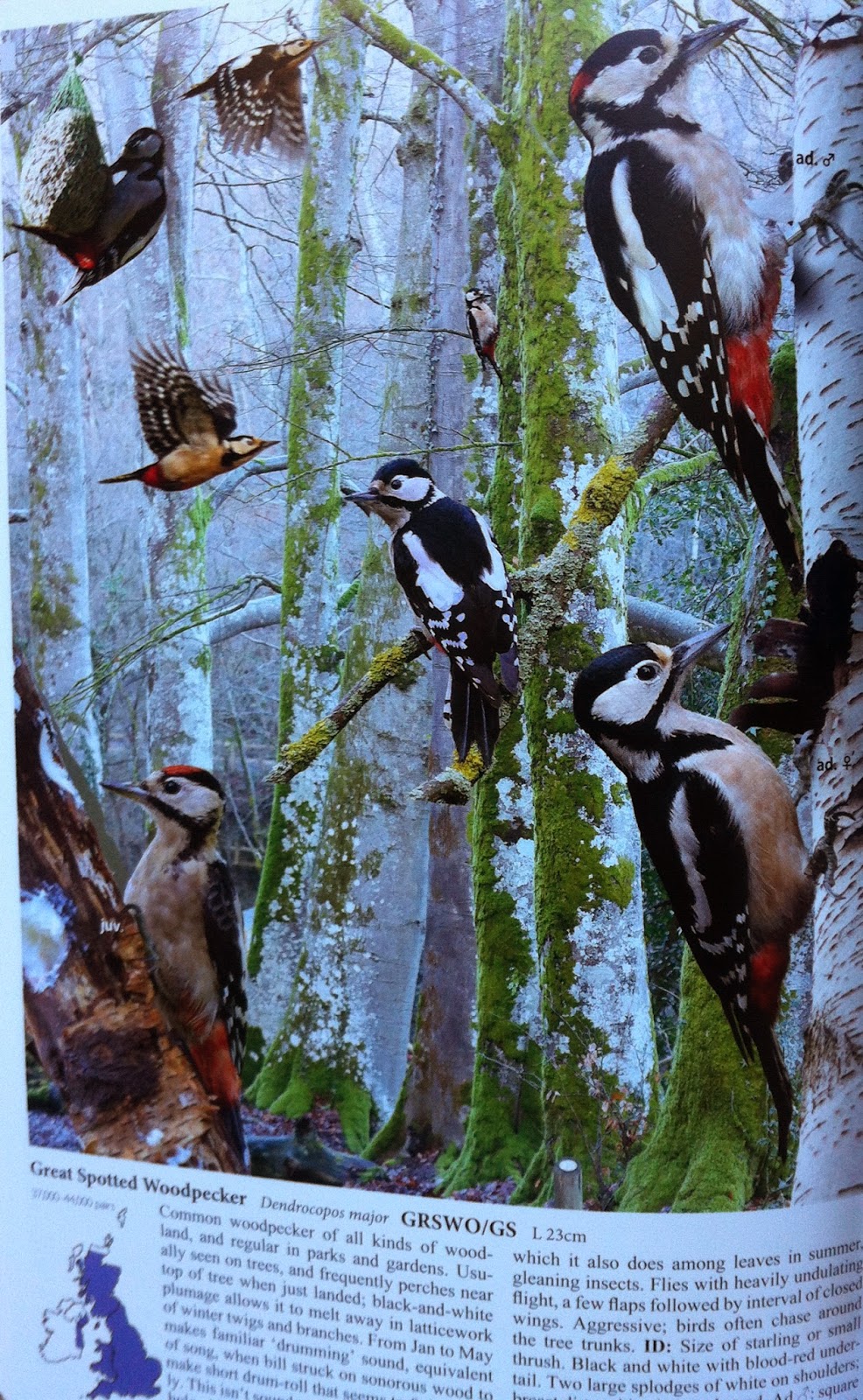 Even though I've never seen a Redwing, I appreciated the chance to glance at a few here: 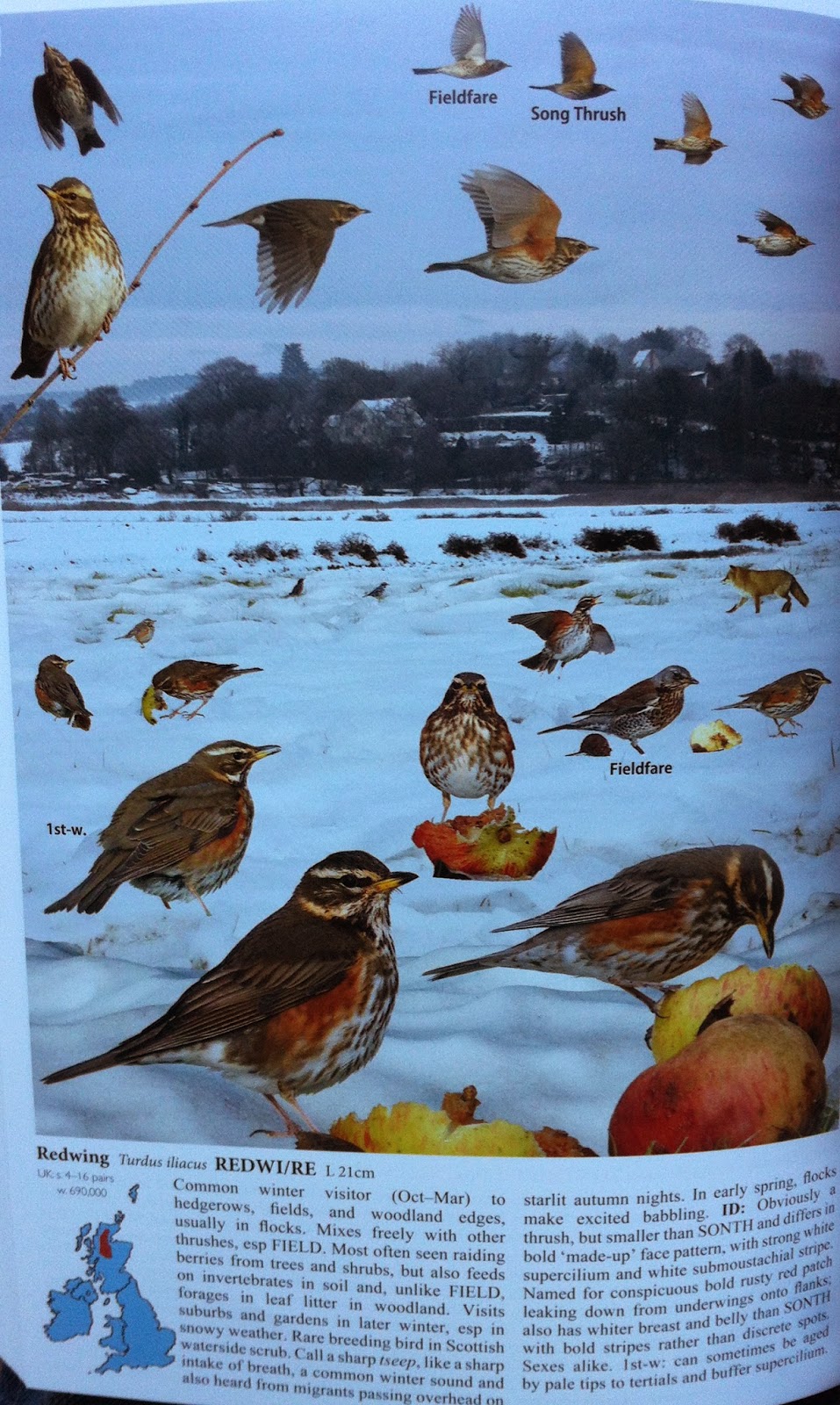 Cuckoos are easy there... 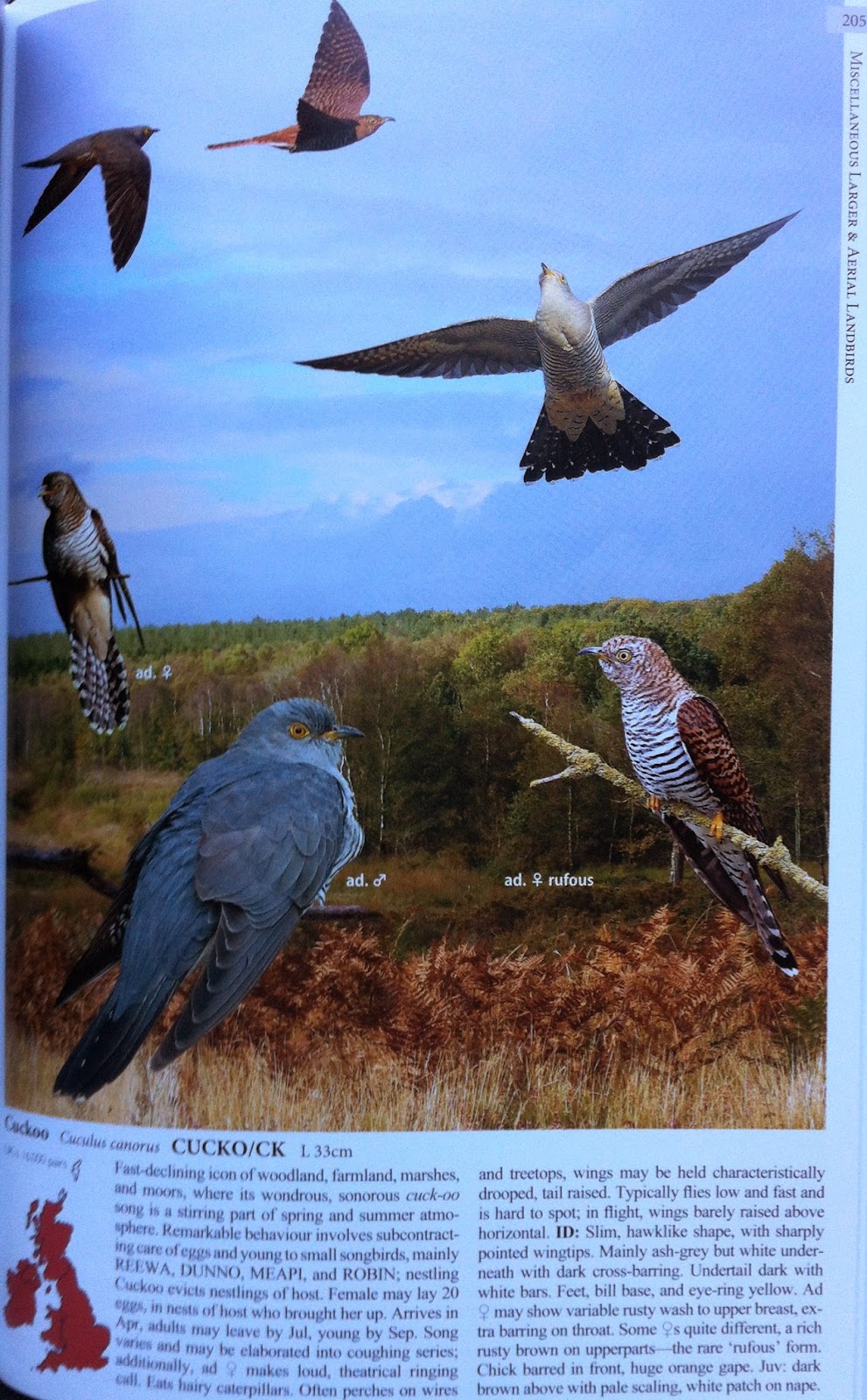 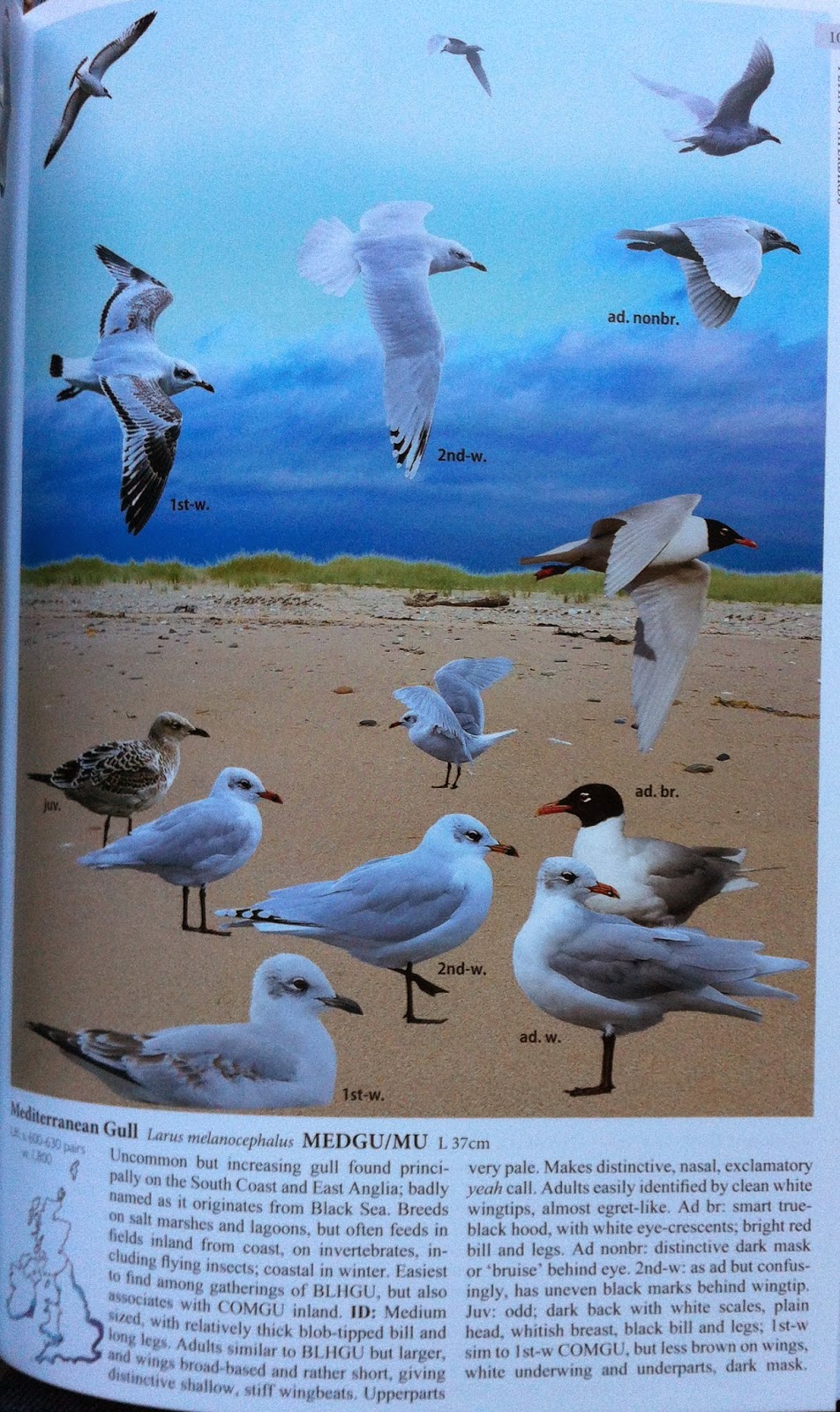 You guys know I'm partial to shorebirds so it's no surprise that I find these plates a bit more interesting than the plates I'd find in Crossley's Eastern guide.  Here's the Ruff page: 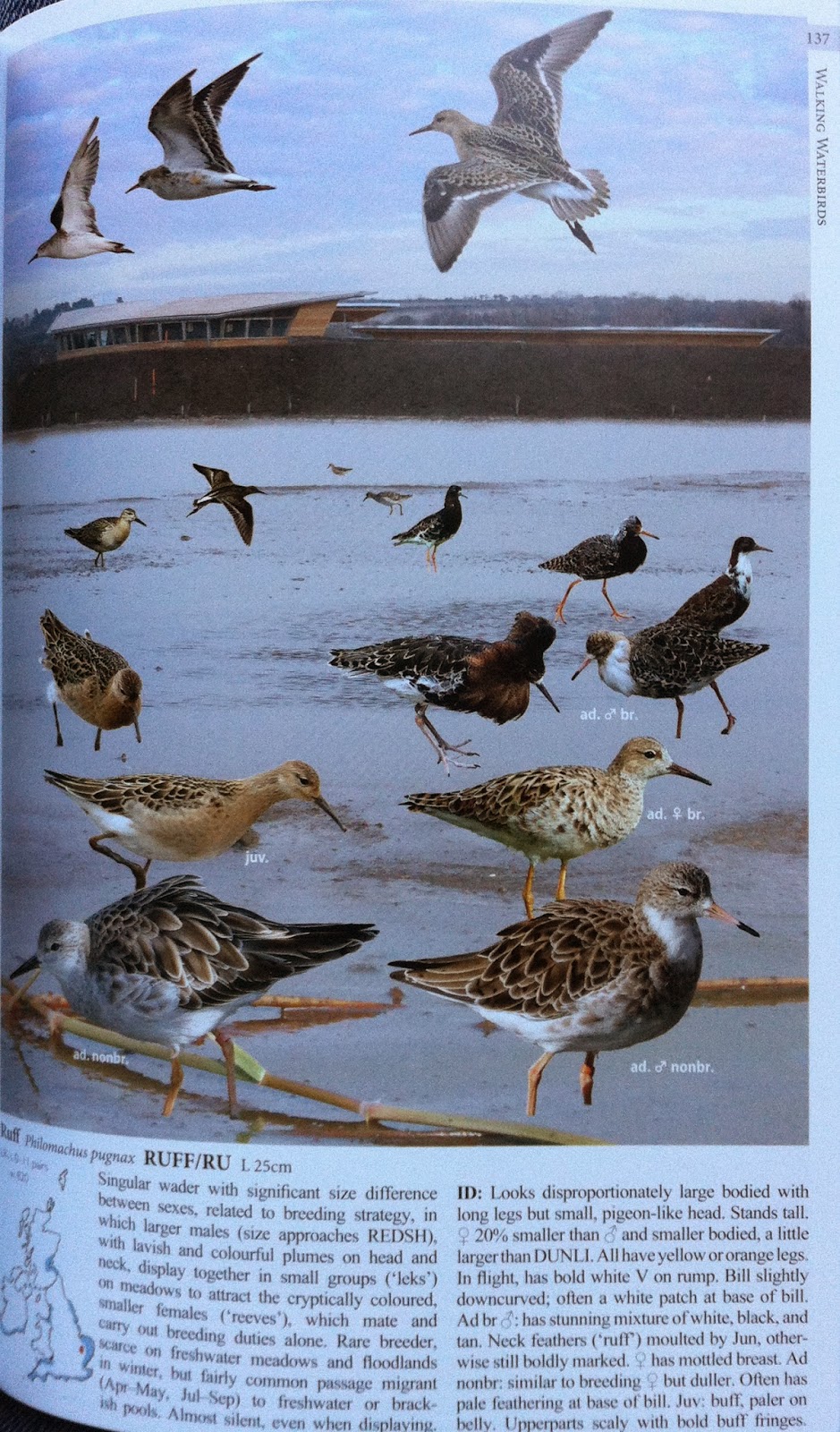 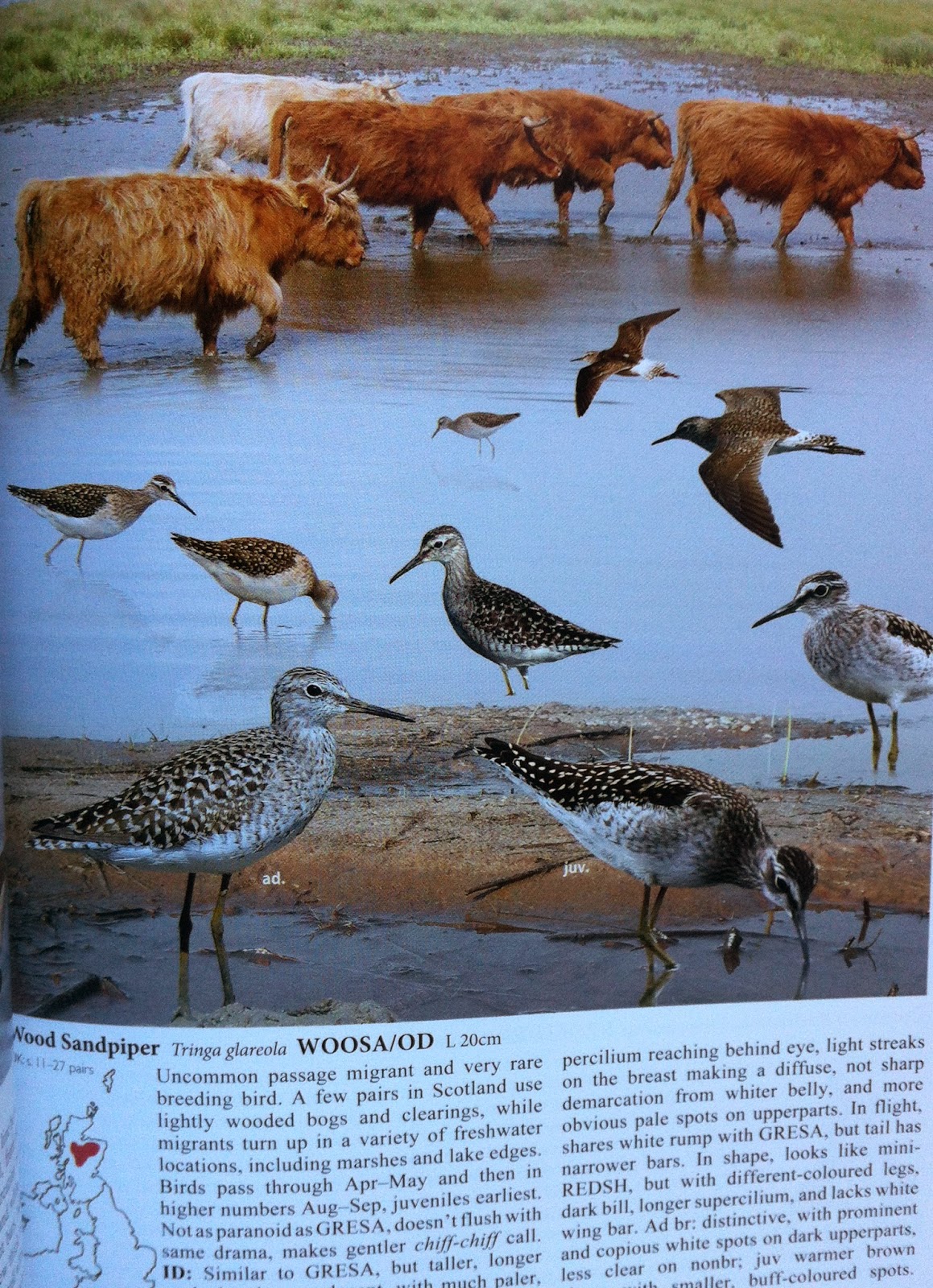 And even though there are multiple species of greenshank in the world, I'm perfectly at ease checking out a few details from that page: 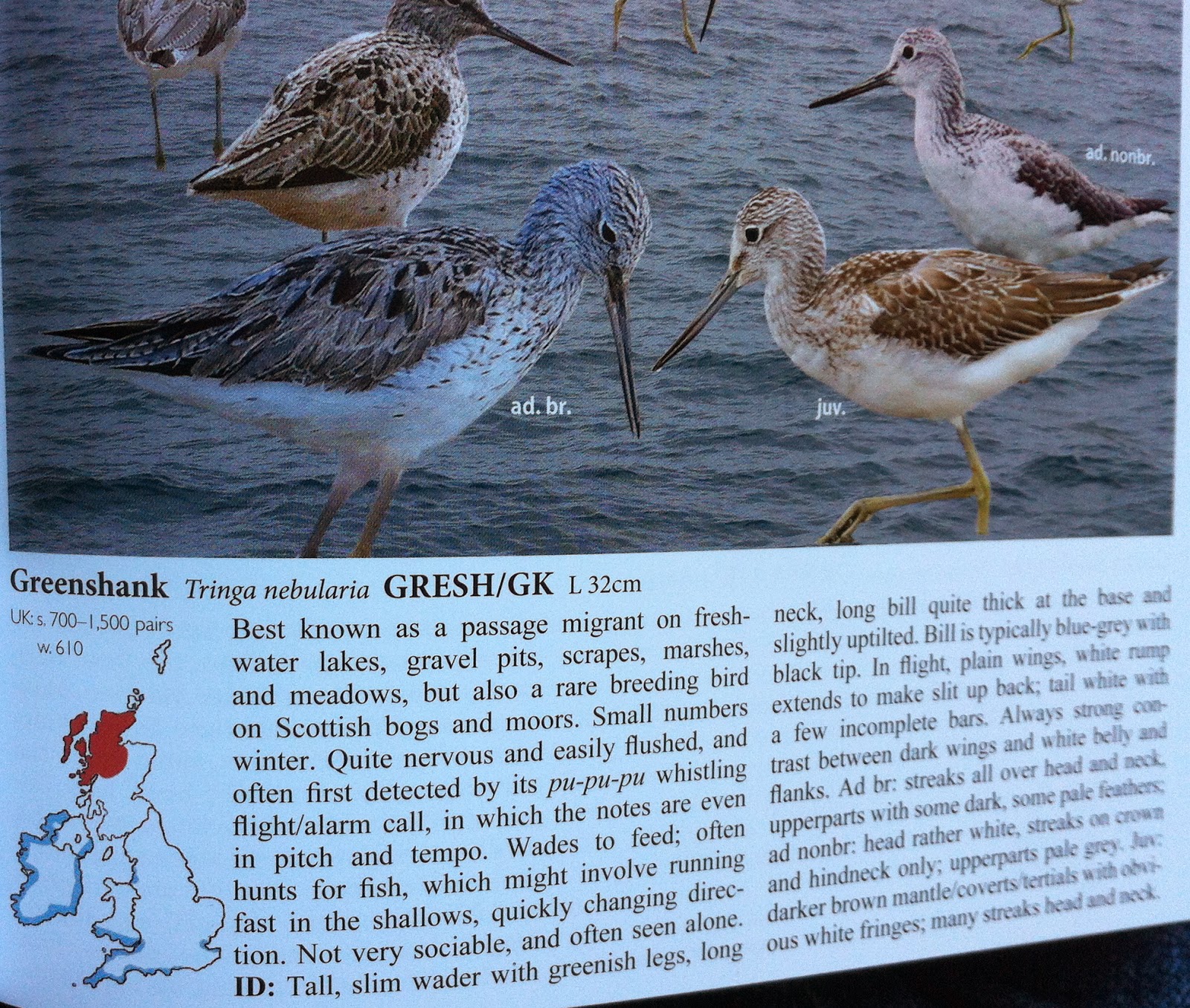 Ok, so what do I think of the book?  Well, it's a Crossley ID Guide (see my previous reviews of these books for more thoughts).  The book intro says that it's geared towards beginners and intermediates, so remember that.

I DID say that this was my favorite Crossley ID Guide so far and that's true (bar height not specified).  See, I've never been to Europe and there is something distinctly more interesting in looking at birds you've never seen before.  Pick up an Asian bird book and flip through that for a while; pretty crazy, right?  Well, the same thing applies here for me; I liked it because I got to look at species I had never even heard of before.  I mean, Twites, Woodchat Shrike, Red-rumped Swallow, Crested Tits, Dartford Warblers, Montagu's Harrier, etc?

So, will I be taking this book when I finally go birding in Europe?  Well, no, obviously.  I MUCH prefer something... say... by Svensson, Mullarney, and Zetterstrom?  Yes, BUT, this might be a great starter book for a beginner or anyone who just wants to ogle some photos.

Disclaimer:
I received a complementary copy from the publisher for review purposes,
but the viewpoint expressed in this article is entirely my own.