The big day is finally here.  You're amped because, well, you'll be under the same roof as the best birders in the world.  Not only that, but this will be the largest gathering of birders under one roof... EVER.  Let's say the state-of-the-art conference, sponsored by the American Birding Association, will be held in this stadium: 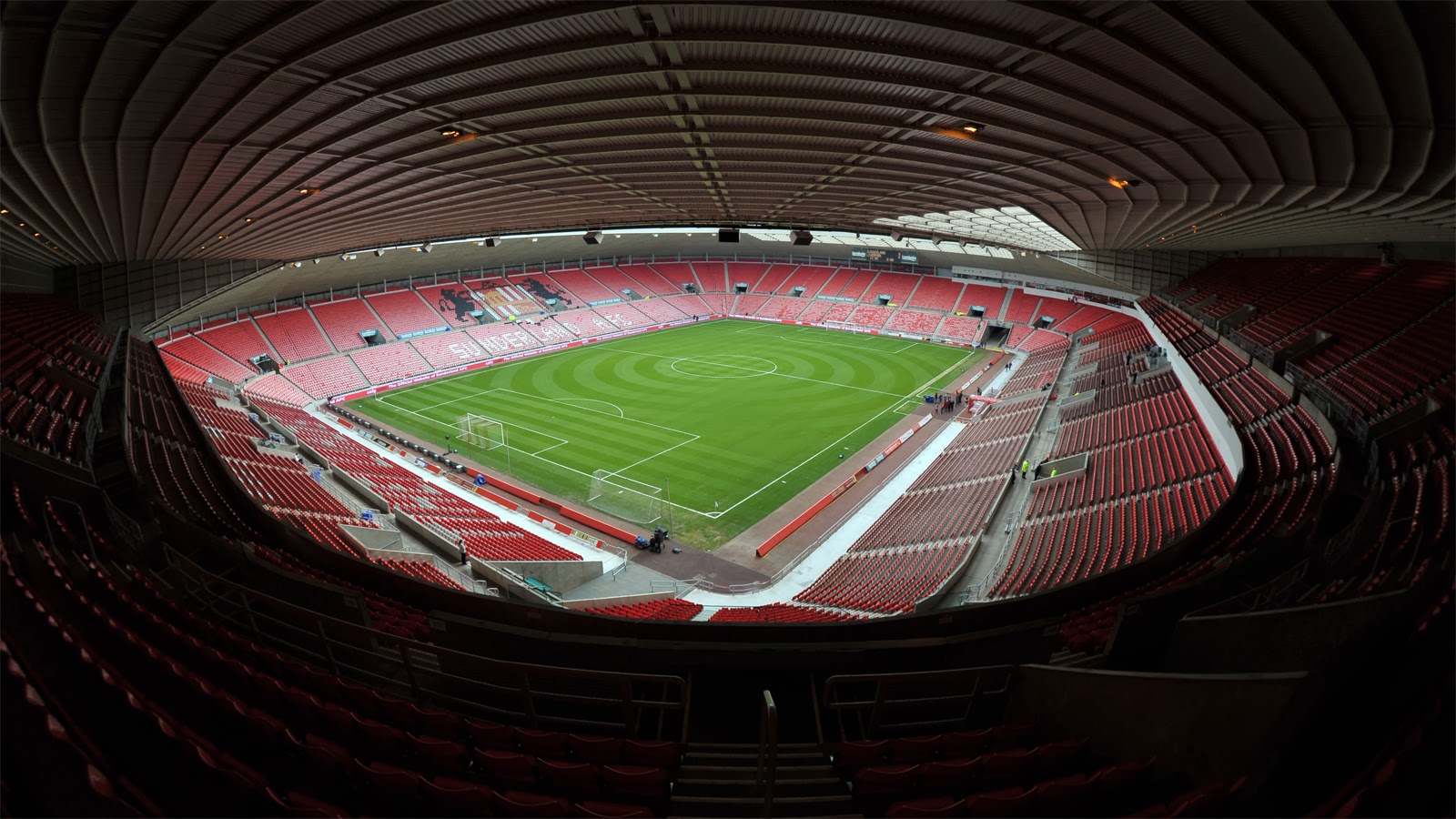 Once you arrive and find your seat (Section 307, Row, 9, seat 3, btw), you're amazed at how many people are showing up... at least a thousand, and then another thousand.  Birders continue to pour in and fill the stadium, many donning their "outdoor approved" tan vests with a myriad of pockets just bursting at the seams with the latest birding gadget or Crossley Guide.  By the start, there are nearly 5000 people jammed under this roof.  The dull roar of thousands of people talking to their neighbors is almost deafening.  No doubt many are clamoring about the newest edition of the Sibley Guide that is going to be released in less than a week.

Pretty soon the crowd hushes as a birder walks up to the mic with some interesting news, a Barnacle Goose was just found... and it was only 5 blocks away.  You sit there and think to yourself "You know, I'm really happy they mentioned that rarity sighting!".   You start to notice a small smattering of birders getting up from their seats and heading out, presumably to go try to relocate the goose.  However, one of them makes their way to the stage.  It's someone you've never heard of or met before but maybe they have something useful to add?

They boldly walk up to the mic and proclaim "wow".  But... that was it.  They turned around and climbed off stage!

You sit there dumbfounded... did someone really just do that?  Did someone truly get up out of their seat, wander down 30 rows, walk up onto the stage.... just to say "wow" into the microphone?  Before you can fully comprehend what just happened, you see another person making their way to the mic.  You think "Oh thank god, hopefully it's an organizer who can bring us back on topic".  They tap the microphone thrice, clear their throat, and gurgle "I hope it waits for me to see it!" before stepping down and heading back to their seat.  You start to see people rolling their eyes.  "Who WOULDN'T want it to wait for them?" one birder asks another.  It's a good point... does that birder actually know how completely unhelpful that comment was for the rest of us?  I mean, you hate to be cruel but seriously...

Shocked, you continue to sit there as person after person, making a fool of themselves (in your opinion), stand there in front of thousands of birders just to say things like:

One guy even proclaimed to the world "Great bird.  You are building quite a list - but I'm still ahead of you in warblers."  Um.... what?  Who is this guy talking to?  And... WHY WOULD YOU TELL THAT TO THOUSANDS OF PEOPLE?  You shake your head... this just doesn't make sense AND it's wasting your time.  You'd leave the stadium but you don't want to miss any pertinent information that might come through so, in essence, you're trapped there.

So, have you made the connection yet?  Of course, there was no conference, it's just a comparison to the Facebook groups that are made for sharing rare bird reports.  See, Facebook is now a major player in spreading the word of rarities via various groups (such as the ABA Rare Birds group).  However, when people report rare birds now, there is always a surge of useless banter.  When I used to see that a new comment had been posted, I'd look at the group immediately expecting either a follow-up post or something useful.  Now, sadly, I expect crap.

"I think we are leaving Sunday AM if it's still there Saturday."

Thank you.  Now would you please keep your daily diaries to yourself?  I don't think you'd be amused if I logged on and proclaimed to everybody "Hey everyone!  I'm Cory Gregory and I sure do like how longspurs look".

So yes, all those above lines, those are actual quotes I pulled from some recent Facebook groups.  In my opinion, they a) are completely useless to all of us, b) should not be allowed, and c) are diluting valuable information.  If you want to show everyone that you're impressed or that you like the post, that's what clicking this is for!

The problem is just the cyberspace disconnect these days; it's too easy for people to type something in 3 seconds and push enter.  In other words, it's easier for everyone to comment which means more comments which sadly seems to indicate more idiotic comments as well.

Don't believe me?  Let's look at the two most-recent threads on the ABA Rare Birds group.  First up is this very interesting report/photo of a Redwing in British Columbia that was found in December 2013: 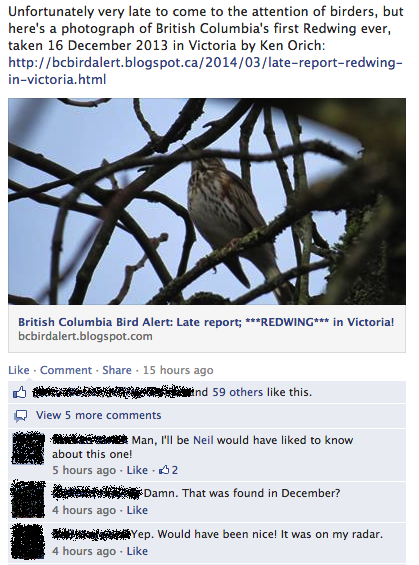 Check out the second comment.  He (a local birder, actually) asks a question when the answer is RIGHT THERE.  Please, people, READ before you ask!

Secondly, here's a legitimate post about a Smith's Longspur in NJ: 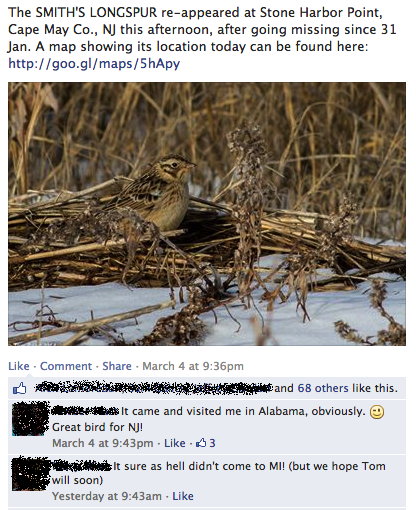 But what about the two comments?  Are either of those helpful to absolutely anyone?  If not, why post them in front of ~5000 people?!  I'm assuming, maybe wrongly, that these commenters understand that we all have to look at it?

There is no doubt that Facebook groups have revolutionized how birders spread word about rare birds, and in truth, I'm a huge fan of the idea of spreading word quickly but there's a dark underbelly to these groups that is indeed ugly.  There is a slippery slope between usefulness and uselessness that some Facebook groups just can not find traction on.  By allowing birders to leave these steaming piles of digital... litter, the useful information it slowly but surely being drowned out.  I would be overjoyed if a moderator with a bit more online presence and a heavier hand started laying out some rules (that were enforced) for posting to these groups.  How about starting with:

I would strongly encourage every birder out there who uses these groups to step back and THINK first before you go blabbering to the rest of us.  Why not treat these threads more like a listserve post and less like a wandering thought?  Surely you'd never send an email out to 5,000 listserve subscribers just to say "Yikes!", riiighhtt?