After we moved into our current place near Sacramento, I remember being ecstatic when we had hummingbirds at our feeders within an hour.  After all, it was late in the season and I honestly didn't know what to expect; back in the Midwest, where we moved from, hummingbirds obviously clear out during the winter.  Would they here?

I took a bunch of photos of that first hummingbird imagining it was a big deal; Anna's.  Turns out, Anna's Hummingbird is the most reliable species of bird BY FAR here in our yard.  Other species of birds, well, you have to wait until they fly by, or you hear them, or whatever.  But Anna's, they're staring us in the eye as soon as we open the blinds every single morning.  I'm honestly not sure if I've ever NOT seen them in a given day here but hey, I'm not arguing because the male is, well, a sharp looking bird: 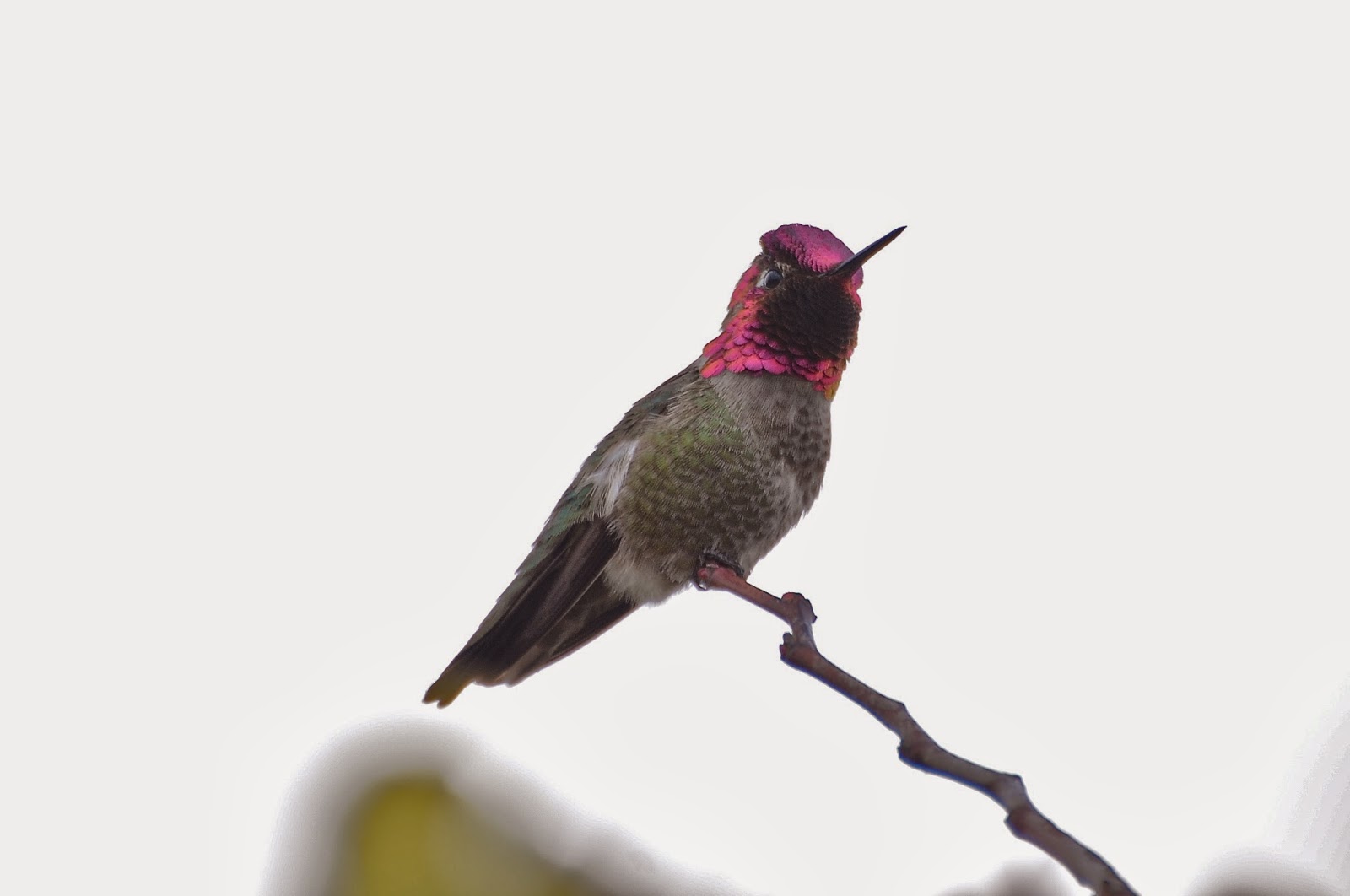 In fact, we've been able to get up close and personal with our resident Anna's.  For example, here is the female on a nest visible from our patio.  Notice how she stuck bits of lichens to the nest for camouflage: 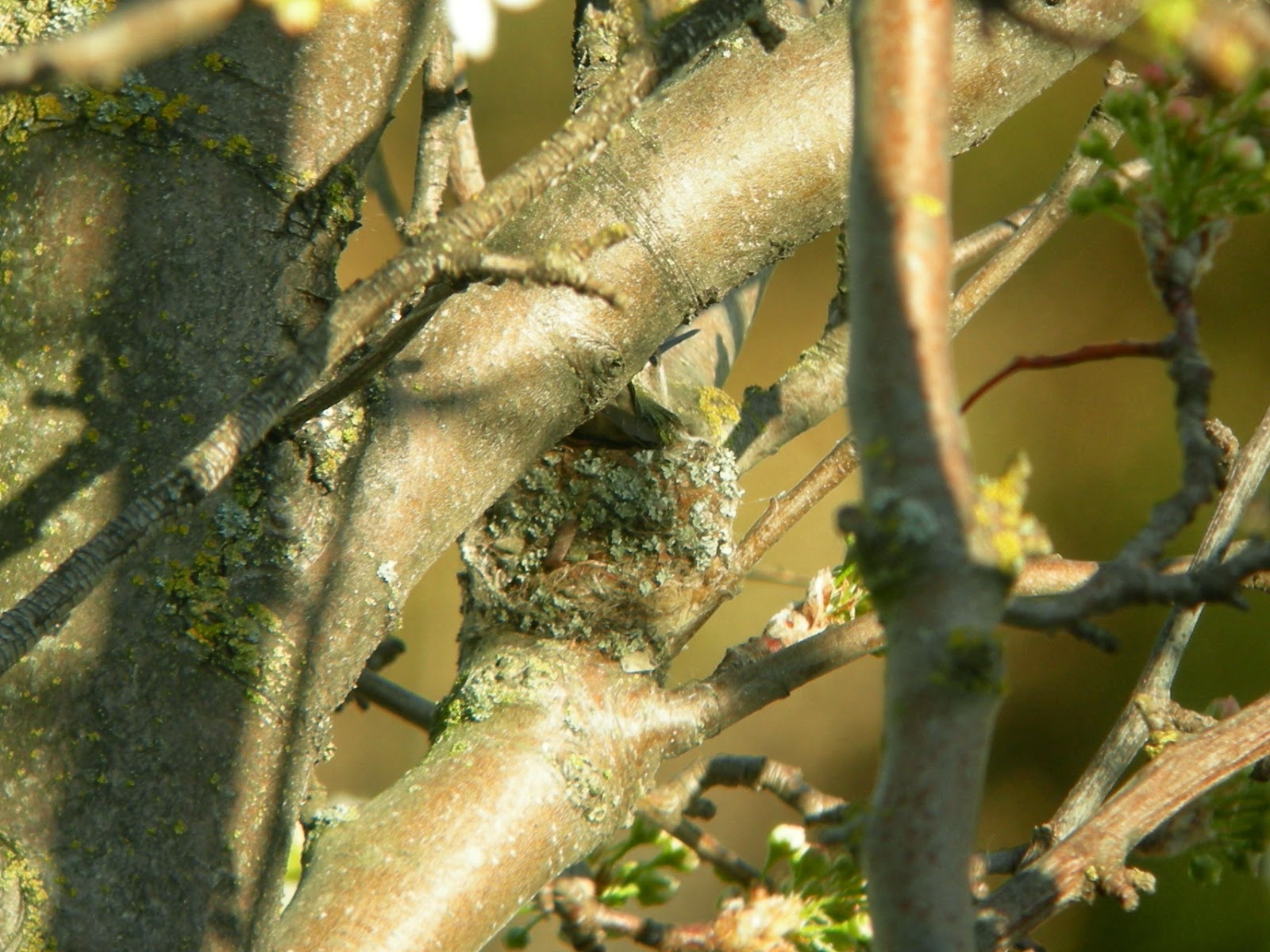 And later in the season, after the young have fledged, you might see a female feeding a youngster: 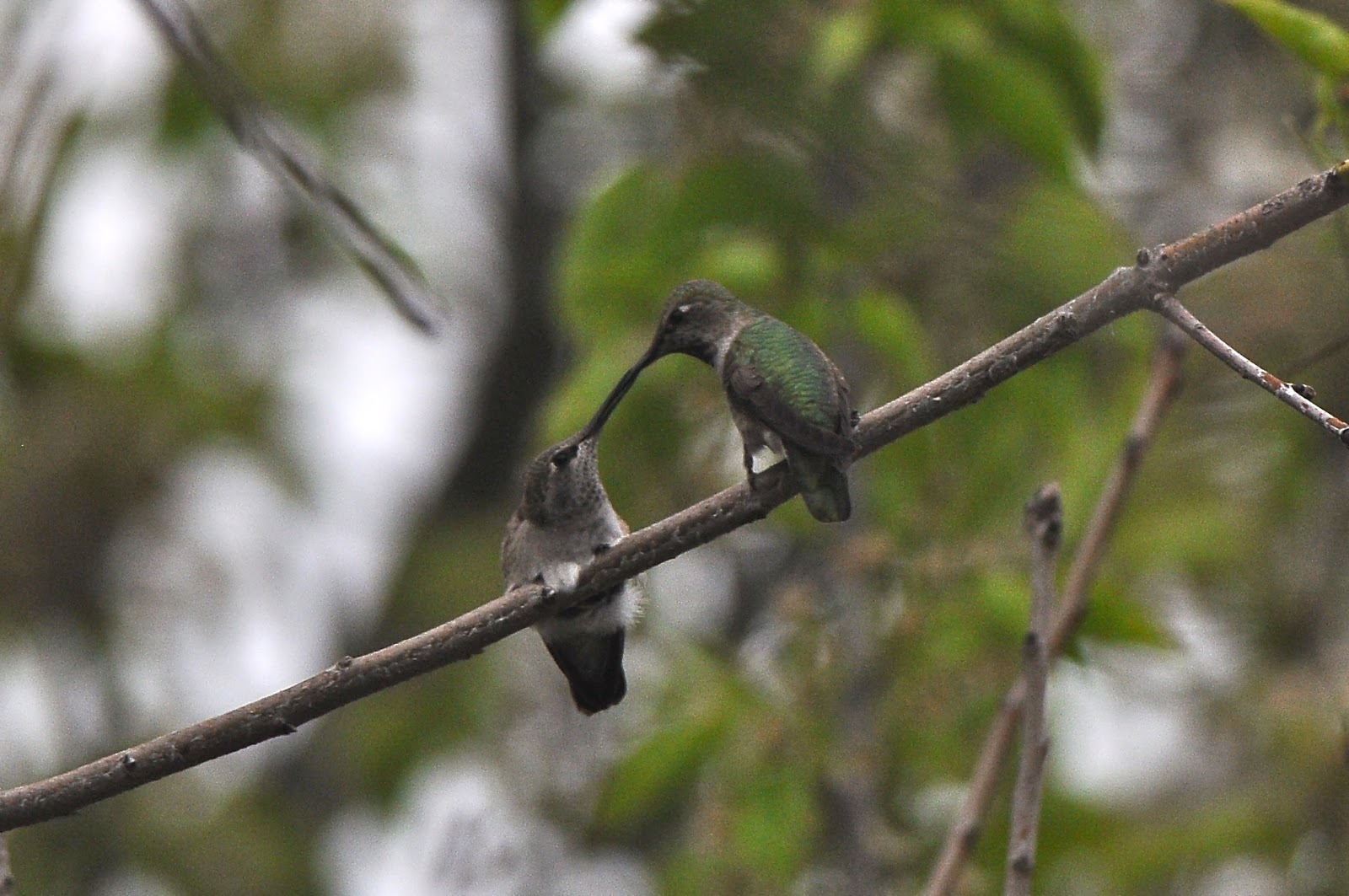 And yes, it turns out that they're year-round residents here so we get to enjoy hummingbirds for longer than anyone back in the Midwest (not to mention use more sugar than ever before).

I was happy to find that Anna's wasn't the only hummingbird species we would see at our urban patio.  For four summer months, Black-chinned Hummingbirds breed in the area and are regular visitors (although never quite as abundant as Anna's).  The quickest way to tell the difference between the females of these two species is simply by size; you'll notice right away that Black-chinned are NOTICEABLY smaller than Anna's and that they habitually pump their tails in flight.  You may not think of Anna's as being a macho hummingbird but they really are (at least away from Arizona; land of the giants such as Magnificent and Blue-throated). 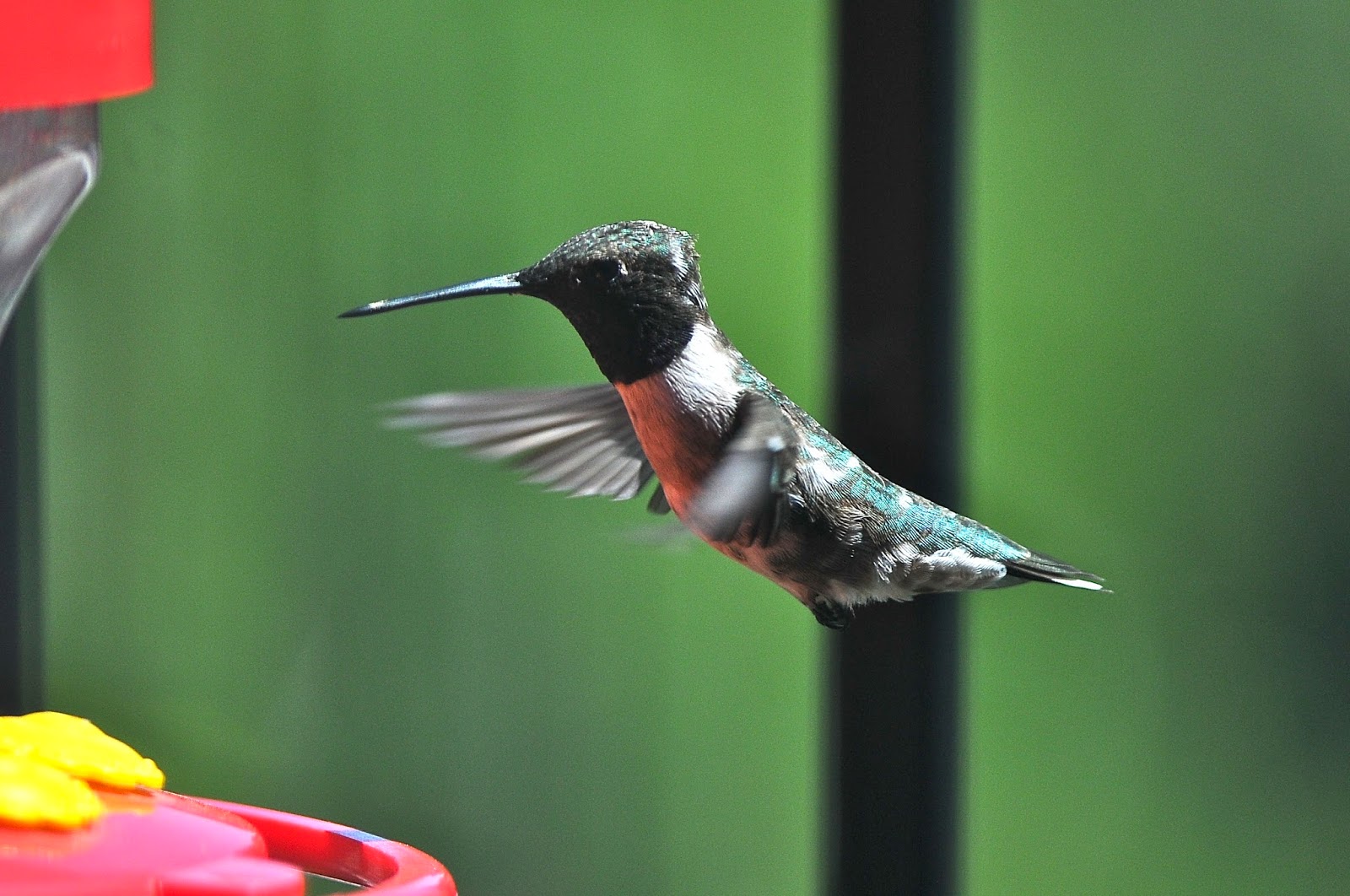 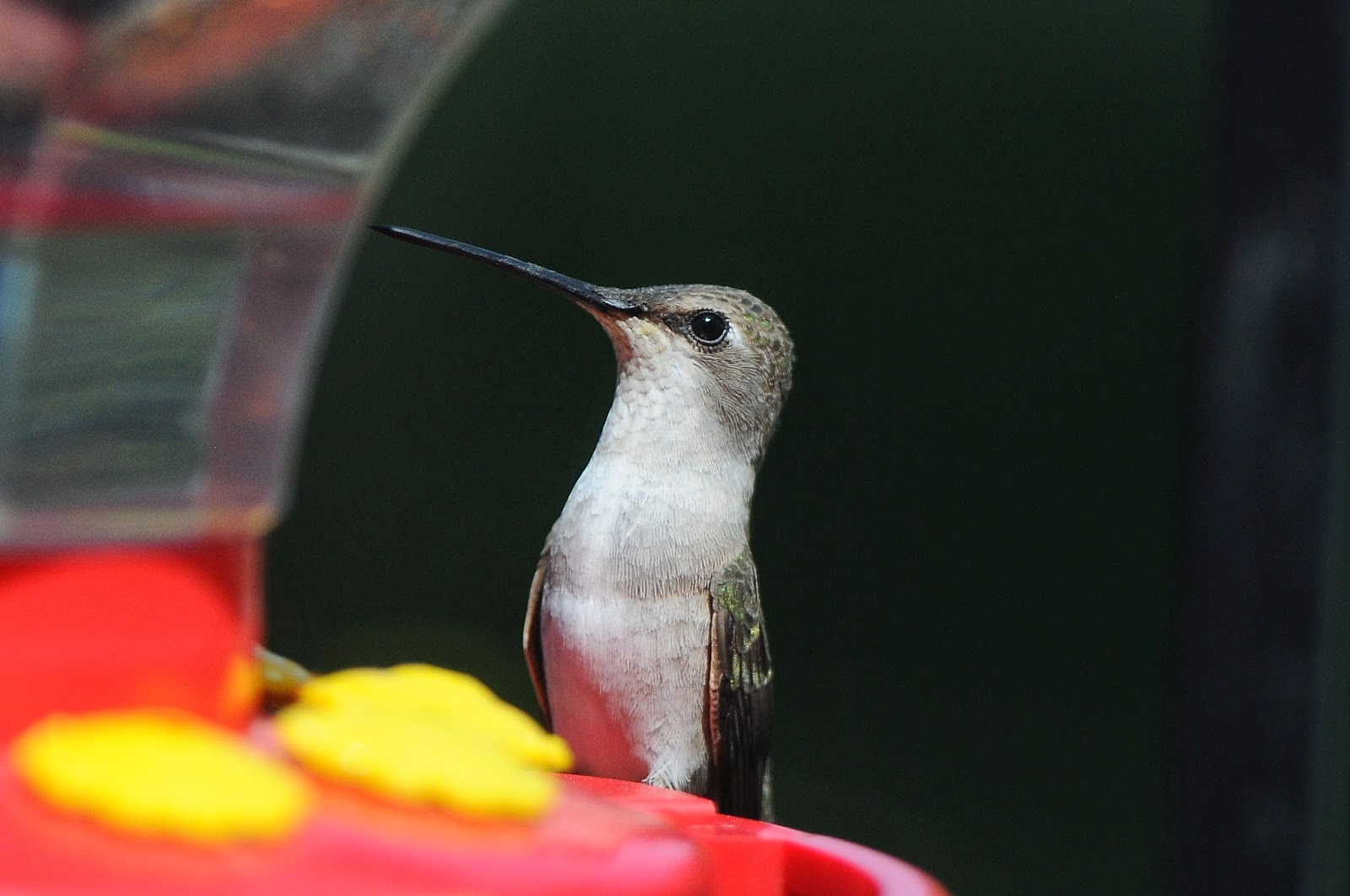 Regarding their seasonality at our feeders, I've seen Black-chinned only between 18 April and 6 August.  We'll see if I can pull-back on the early date this spring.

There is another regular species that visits our feeders and this one is feisty, even smaller still, and recognizable at an instant.  Rufous Hummingbirds are SPRING-ONLY migrants here at my apartment.  Here's a male perched in the tree right off the patio: 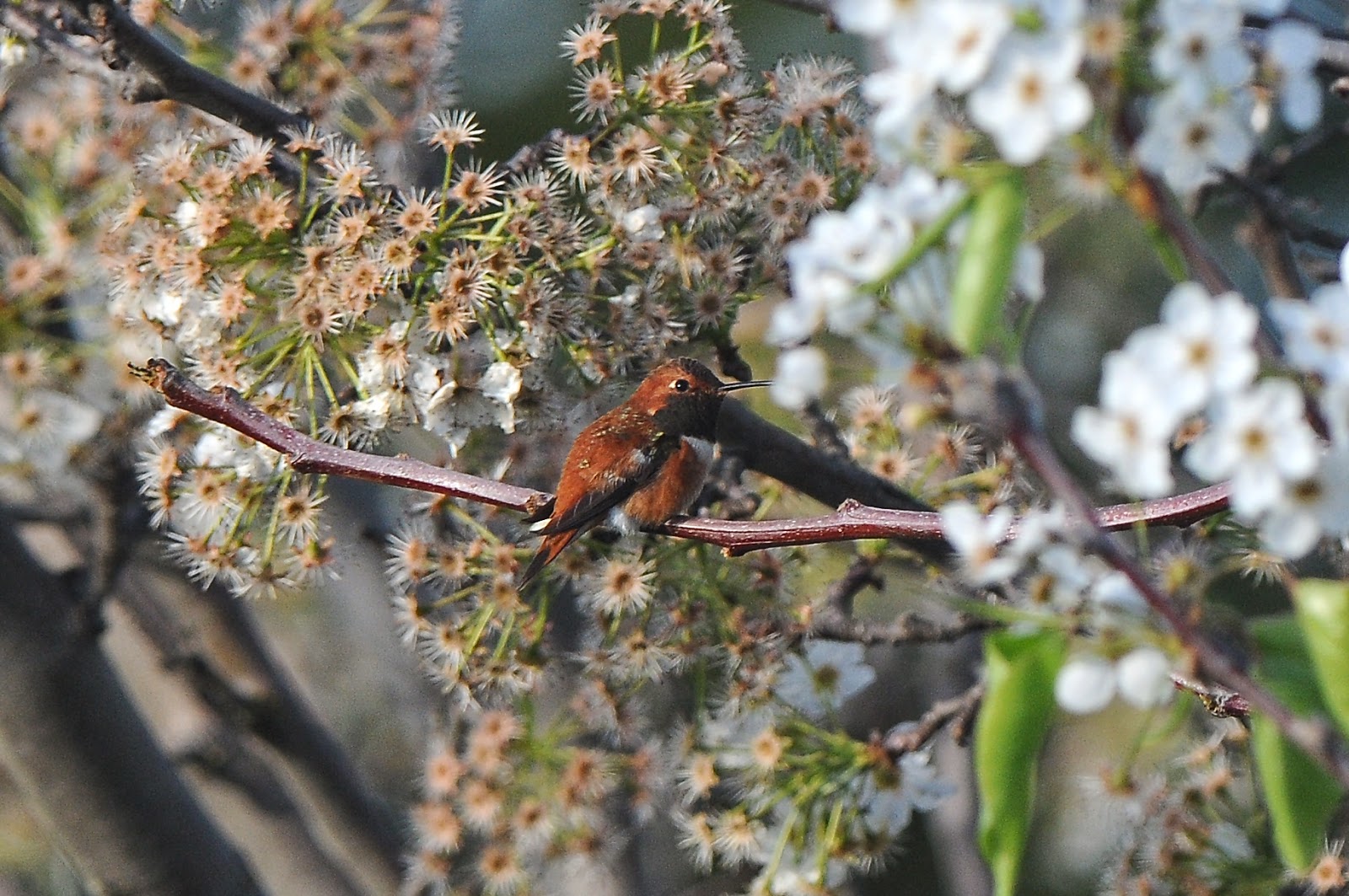 You might wonder about the very similar Allen's Hummingbirds that are found in California; are those a possibility here?  Well, the short answer is "not really".  Ok, technically it's remotely possible but they generally stay to the west of us and I have yet to see one in the Central Valley.

So far, we've seen Rufous Hummingbirds at home only during a 55-day span between 13 March and 6 May.  In fact, that is the reason for this post, I photographed this female which passed through the yard the other day: 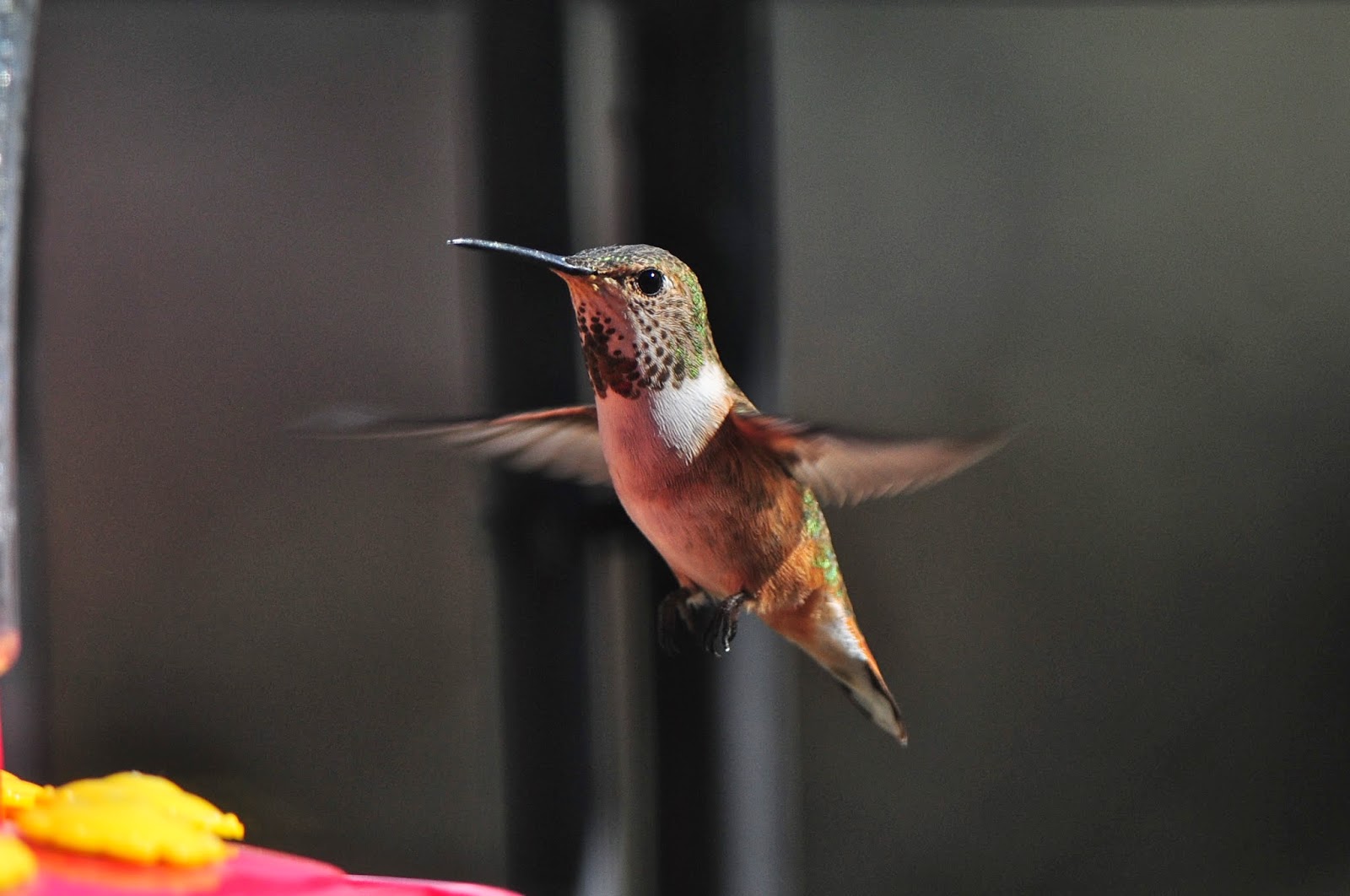 However, the biggest surprise for us was finding that Calliope Hummingbirds also migrate through!  And when they visit, man, what a stunner: 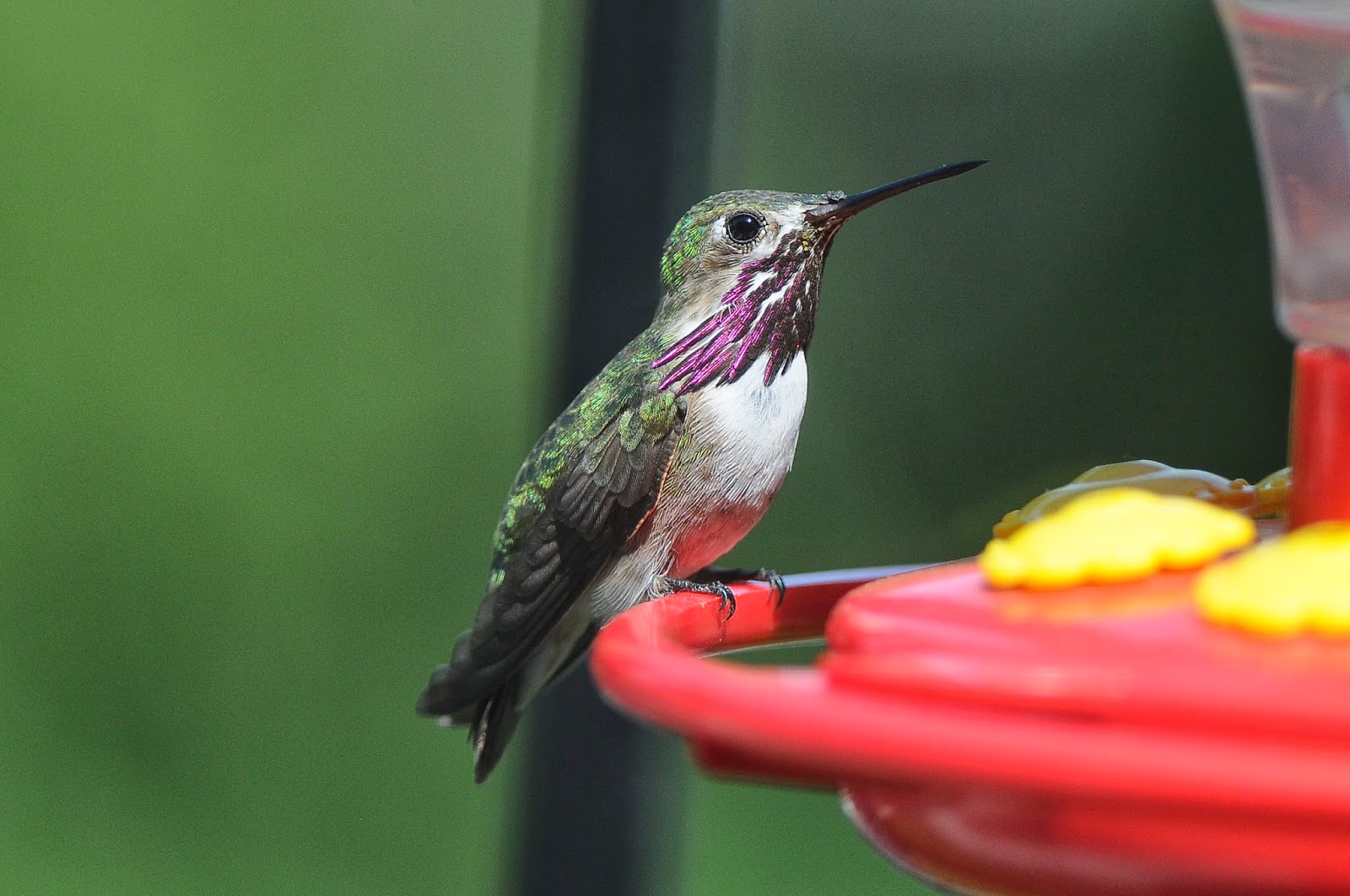 As far as I can tell, Calliopes are a spring-only migrant as well (I've seen them in the yard only between 15 April and 7 May).  I will certainly post if more come through this spring.