In the same vein as my other 2014 Sacramento County birding exploits, one could include my recent trips to Nimbus Fish Hatchery.

Although this well-known birding hotspot along the American River is at least 30 minutes from my house, I've made the trip several times this year already (remember, I'm pretending that I'm reluctant to leave this county; I'm still grounded).

Nimbus Fish Hatchery is along the American River which flows between Folsom Lake and its junction with the Sacramento River in... ta-da... Sacramento:

Parking at the Nimbus Fish Hatchery is free at the access off of Gold Country Road (which travels southwest off of Hazel Ave).

Although I never visit to actually watch the fish jump the ladder, this spot has been providing mitigation for habitat loss since 1958.  However, the annual fall migration of salmon and steelhead in the lower American River is still of interest to me... the birding here is great!

There are a couple of main attractions for birders; first might be the flocks of divers that congregate on the river near the fish ladders.  For example, the male COMMON MERGANSERS here practically glow when the light is at your back: 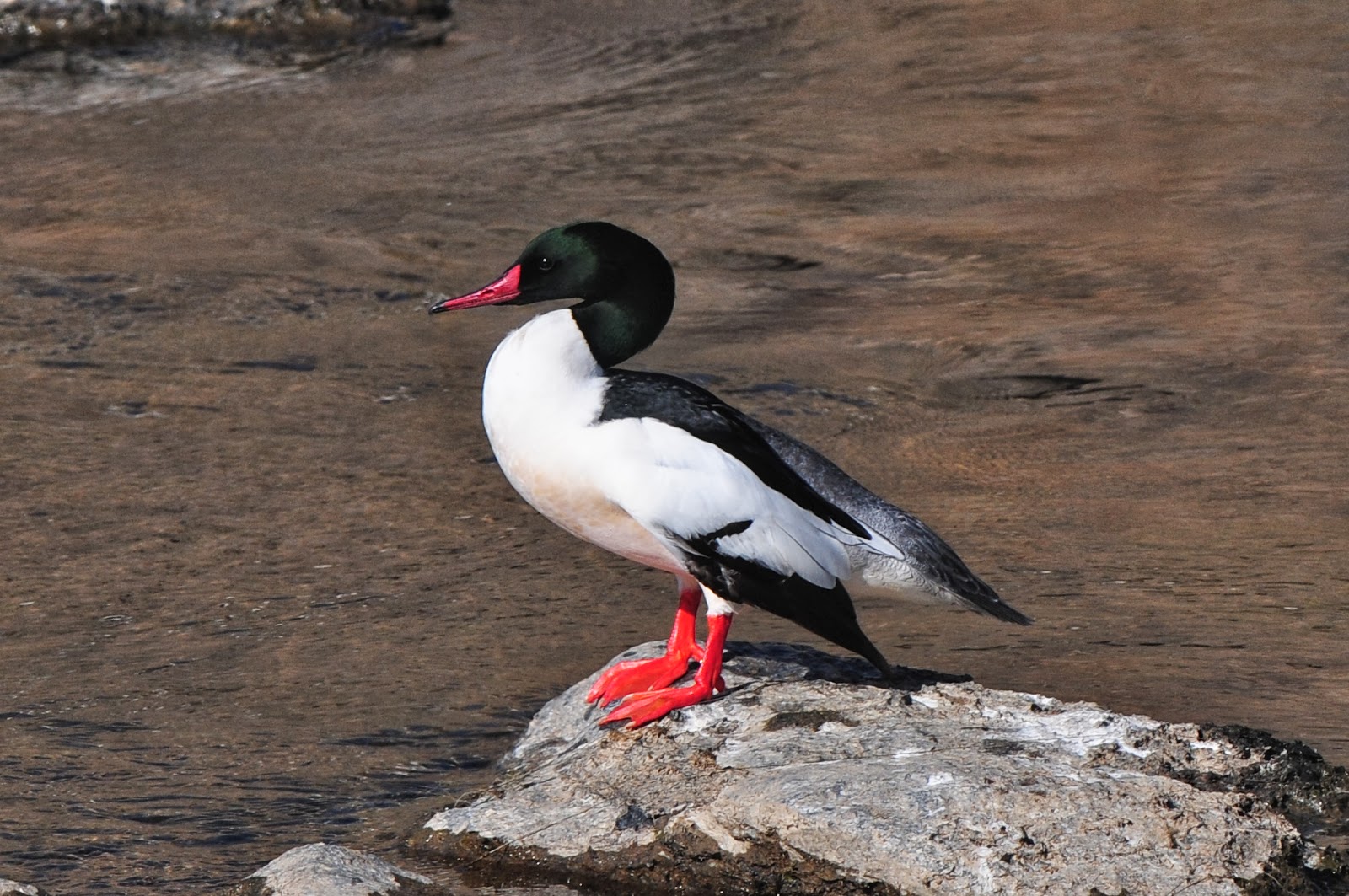 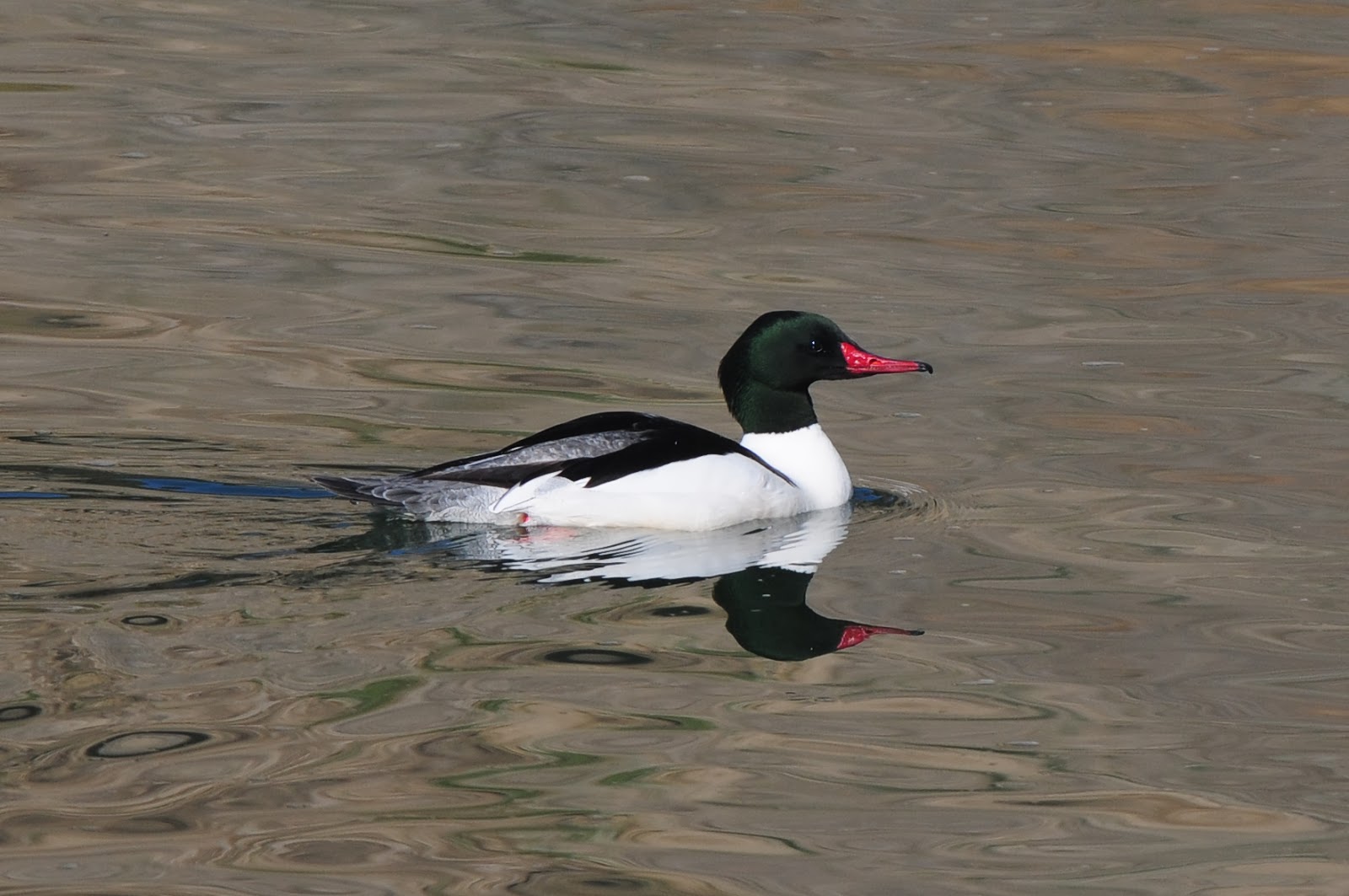 There are always females loafing around too.  These are separated from the much-rarer Red-breasted Merganser by the white chin and the much thicker bill: 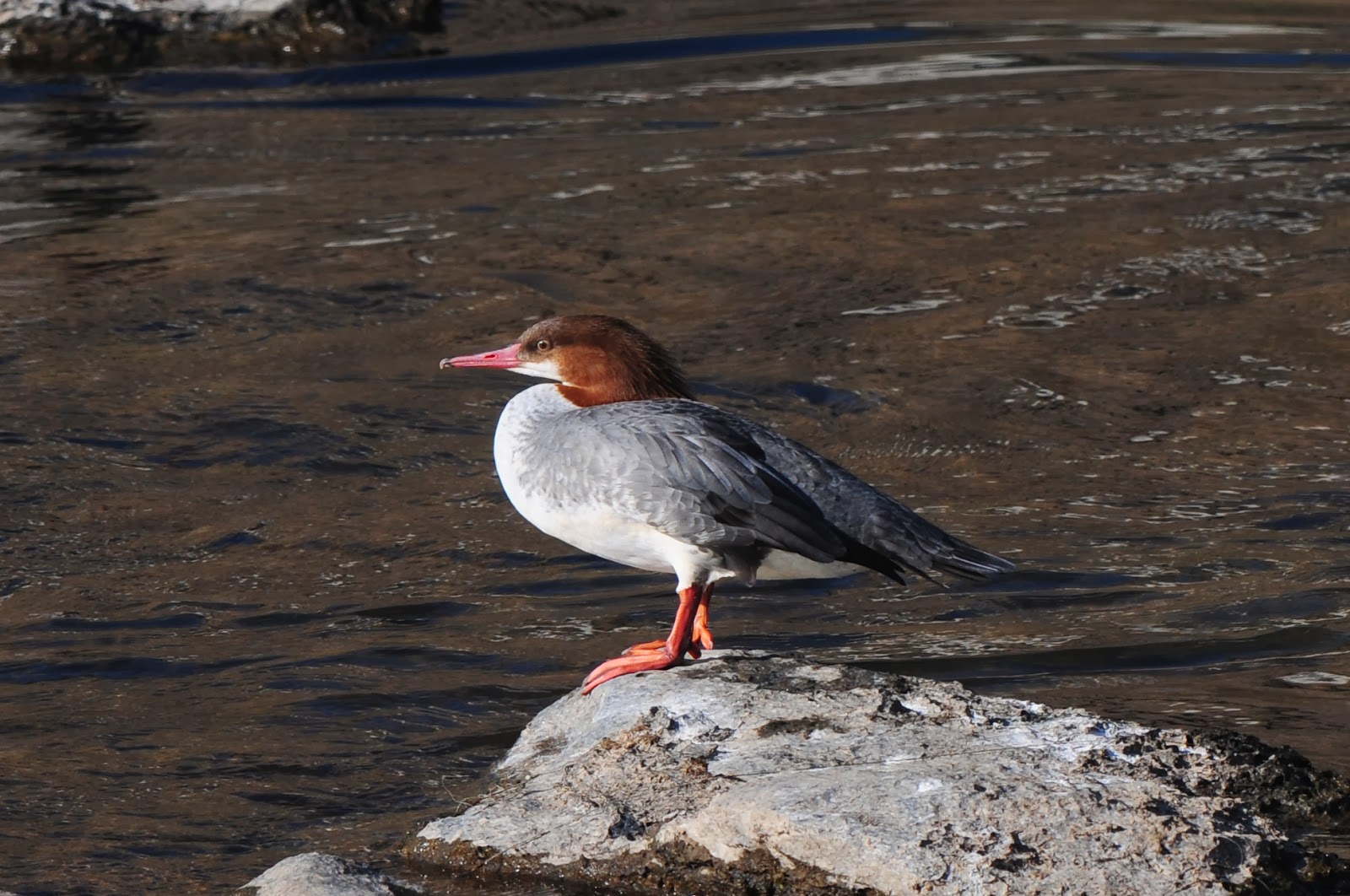 -whistle-  Yes, she makes me turn my head too. 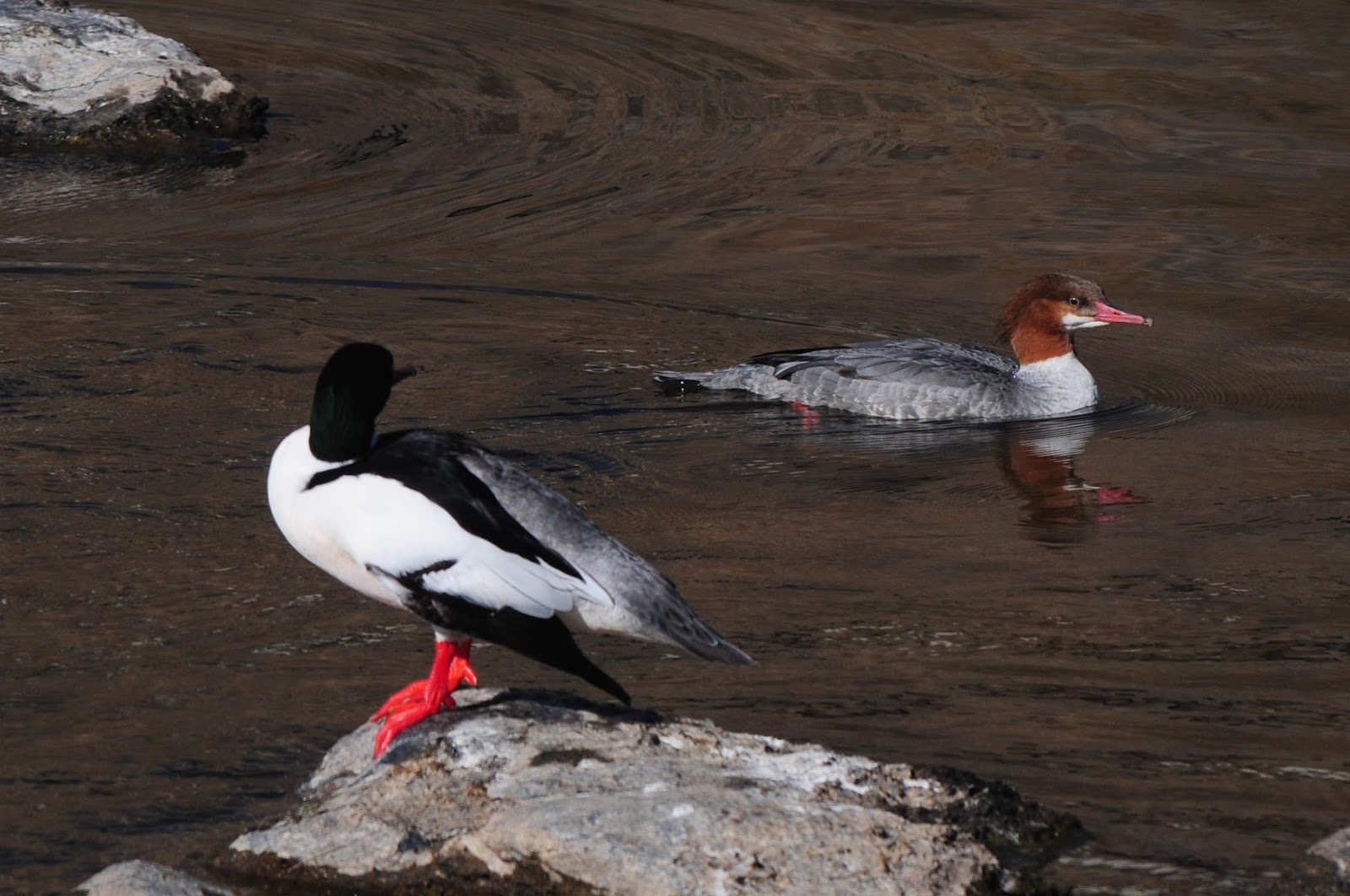 Usually more numerous than even the mergansers are the goldeneye that congregate here (I counted more than 80 goldeneye on my last visit).  Arriving in November and then wintering until April, both COMMON and BARROW'S GOLDENEYE are found here although Common is always more... common; the ratio as of late is about 1 Barrow's for every 12 Common.  Here are some Common Goldeneye of various sexes and ages: 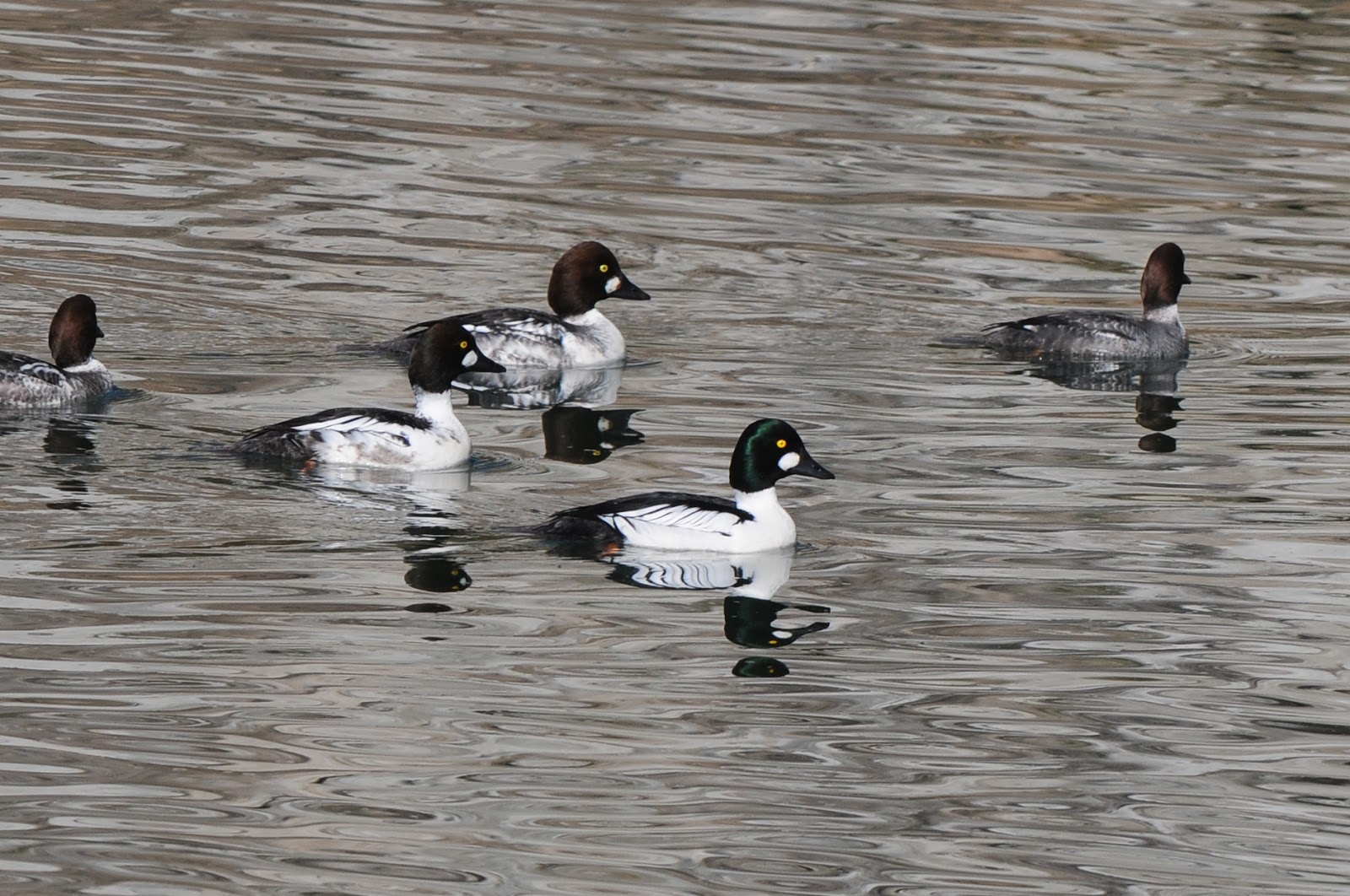 The gleaming male in front is an adult whereas the two middle birds behind him are young males.  You can see that their flanks and scapulars aren't clean yet but the head pattern is mostly there already (although their heads still lack that fine, glossy finish).  The two outer birds, the shy ones that won't look at the camera, are females (note the darker gray flanks).

I mentioned BARROW'S GOLDENEYE so here is a sharp-looking female: 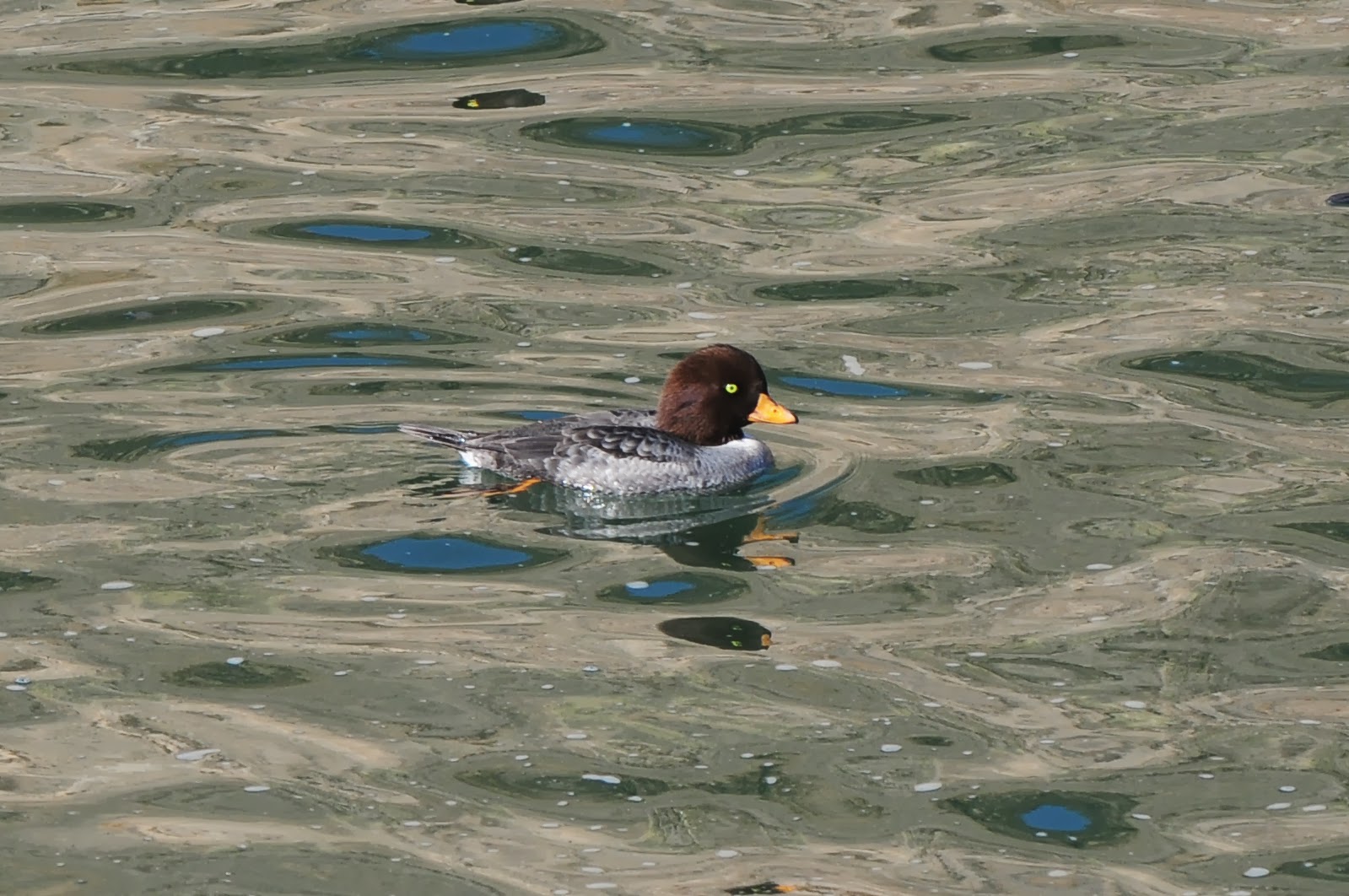 The main field mark to note is the screaming yellow bill; female Common Goldeneye will absolutely never show quite this much yellow.  You'll also note the angle of the forehead just above where it meets the bill.  Barrow's Goldeneye have a smaller, more triangular bill along with a different head shape.  Here is that same female with a male COMMON GOLDENEYE; note the different bill size: 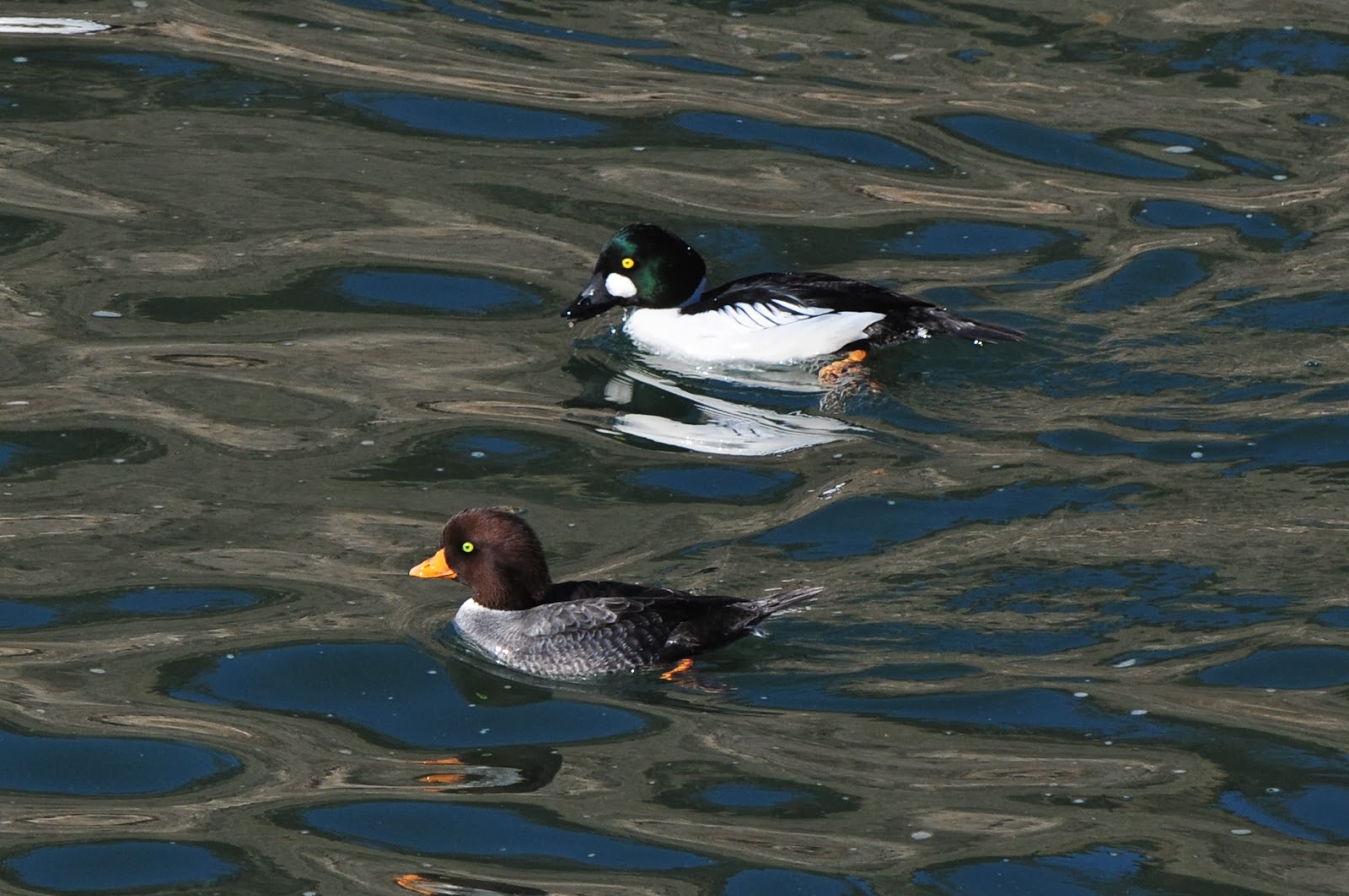 Some of the female BARROW'S GOLDENEYE aren't quite as obvious.  Here is a female (right) with two COMMON GOLDENEYE.  Note especially the angle of the forehead compared to the Commons: 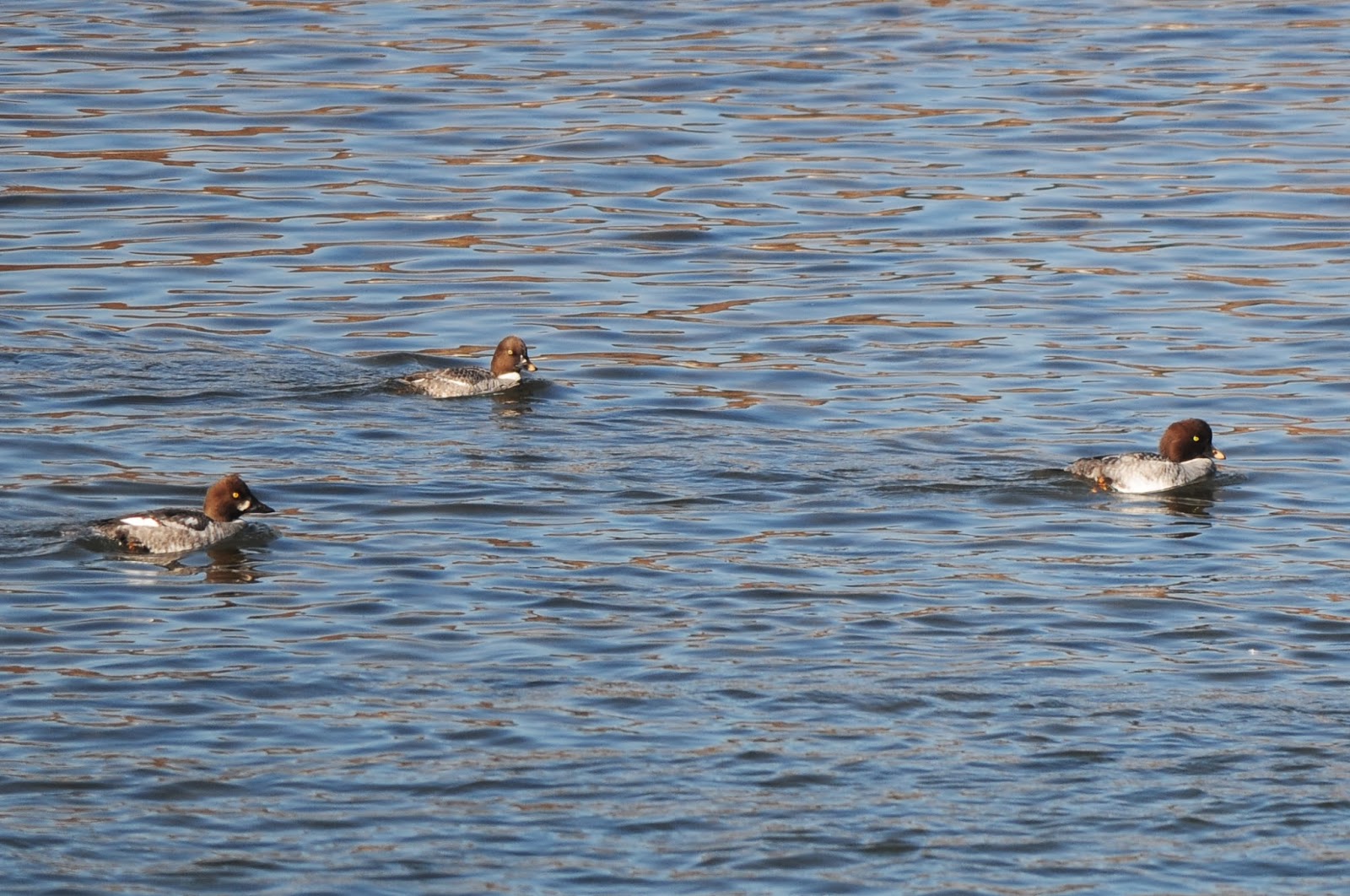 To make matters worse, but more interesting, the two species of goldeneye DO hybridize from time to time, and guess what, I happened to find such a bird on my last visit (the first COGO X BAGO hybrid ever entered into eBird for Sacramento County).  Here's the male hybrid (right) along with a male HOODED MERGANSER (middle) and a male COMMON GOLDENEYE (left): 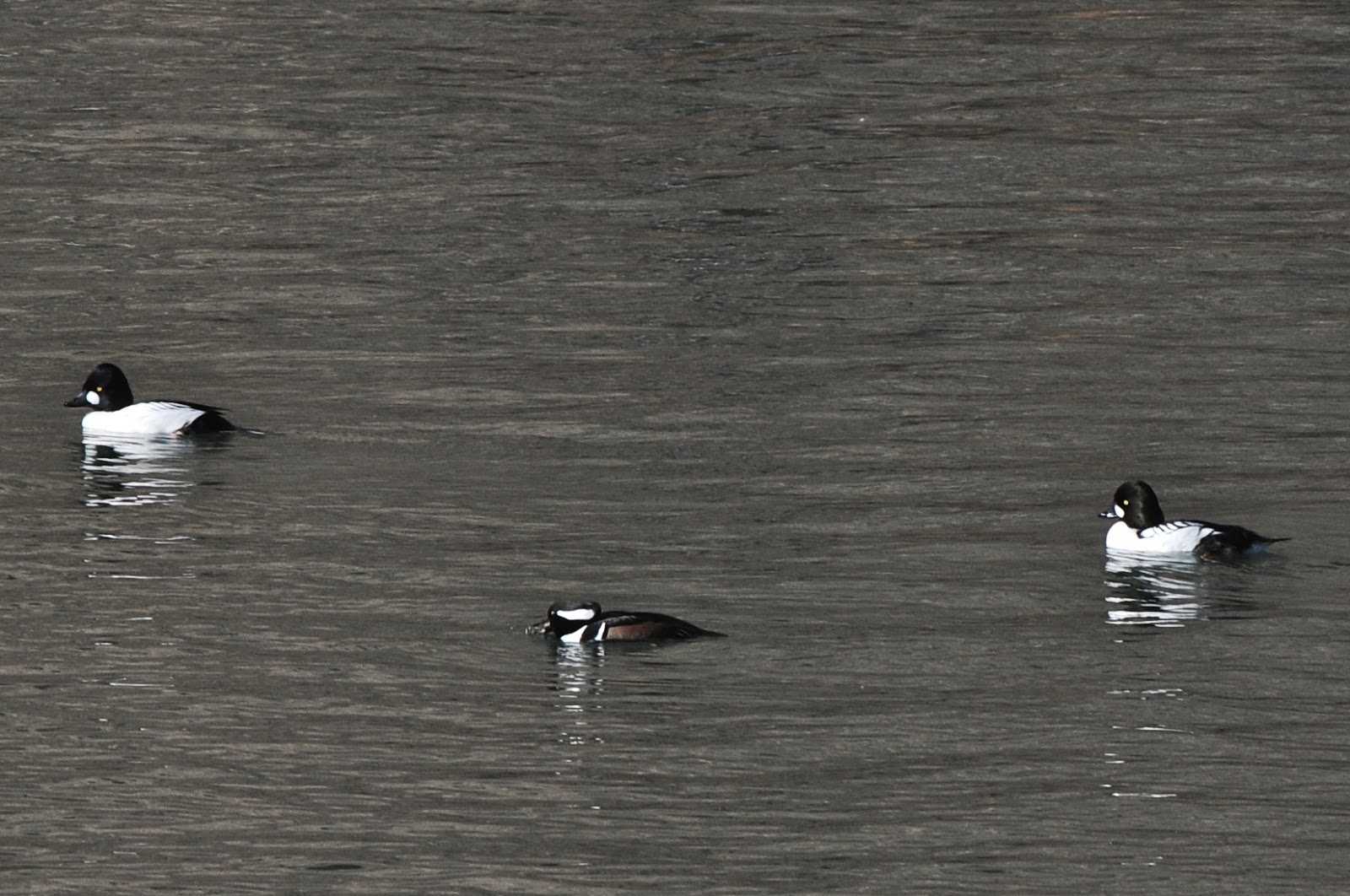 You'll notice a couple of interesting things about this bird.  First, the bill is smaller than the Common's and I'd say it looks fine for Barrow's.  Secondly, the forehead is steeper on the hybrid (again, I'd say it looks fine for Barrow's).  However, the facial crescent is intermediate in shape and maybe even a touch closer to Common than Barrow's.  Lastly, you'll see that the black on the scapulars is intermediate between the two species and the "black spur" is... kind of there but not as pronounced.

Moving on from ducks, Nimbus Fish Hatchery is also one of Sacramento County's finest spots for gull watching.  At least 10 species of gulls have been seen here through the years which makes it one of a few Central Valley locations that can boast those numbers.  Here's part of roosting flock during my last visit: 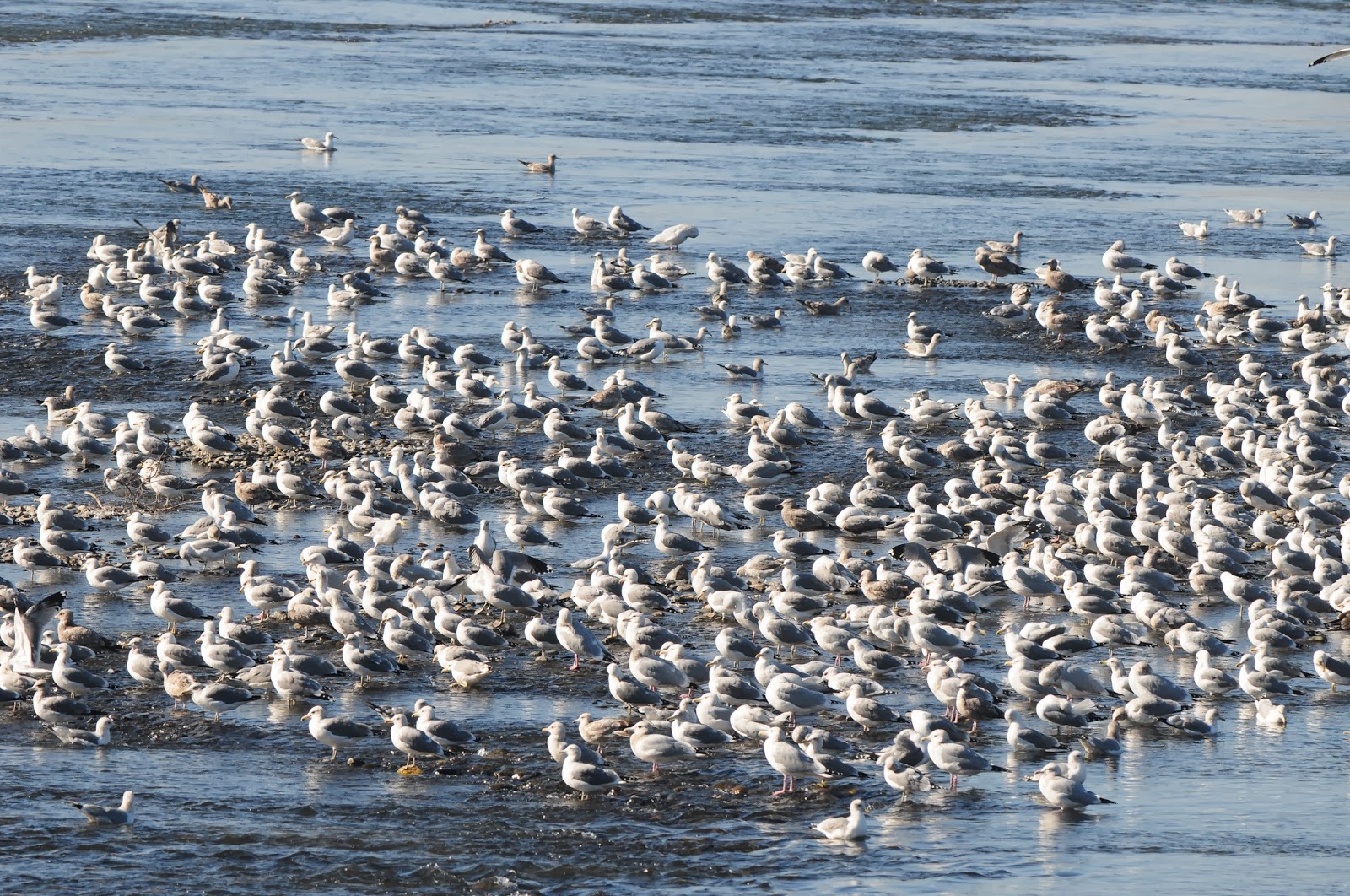 However, I've only seen 6 of those 10 species at Nimbus so far.  Here's my list in order of most common to least common (based on my opinion):

The GLAUCOUS-WINGED GULLS, which are winter-only residents, seem to be fairly pure here which is a nice change (they hybridize rampantly).  Here are two recent photos of these large, dark-eyed, smudgy-headed behemoths: 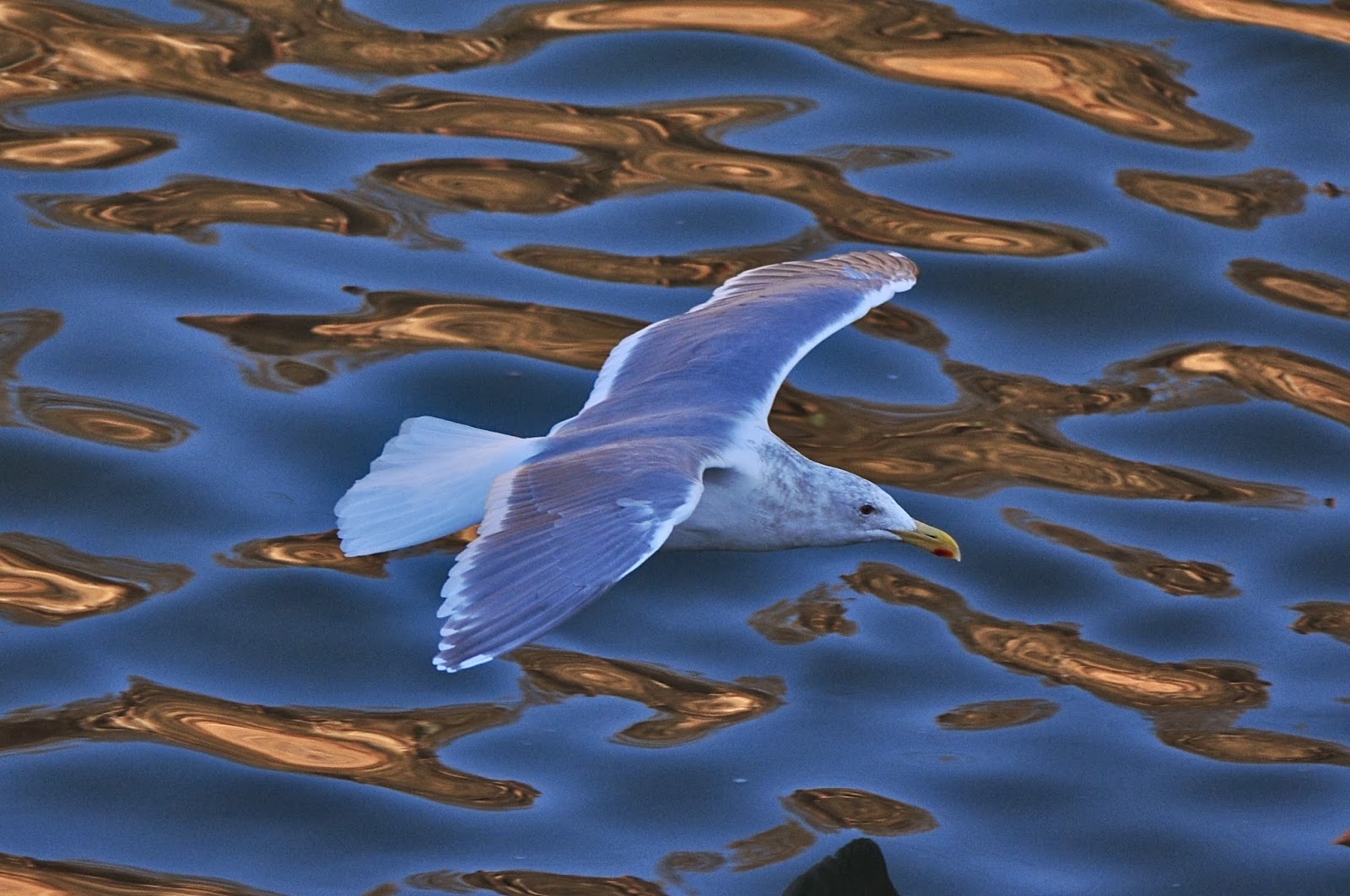 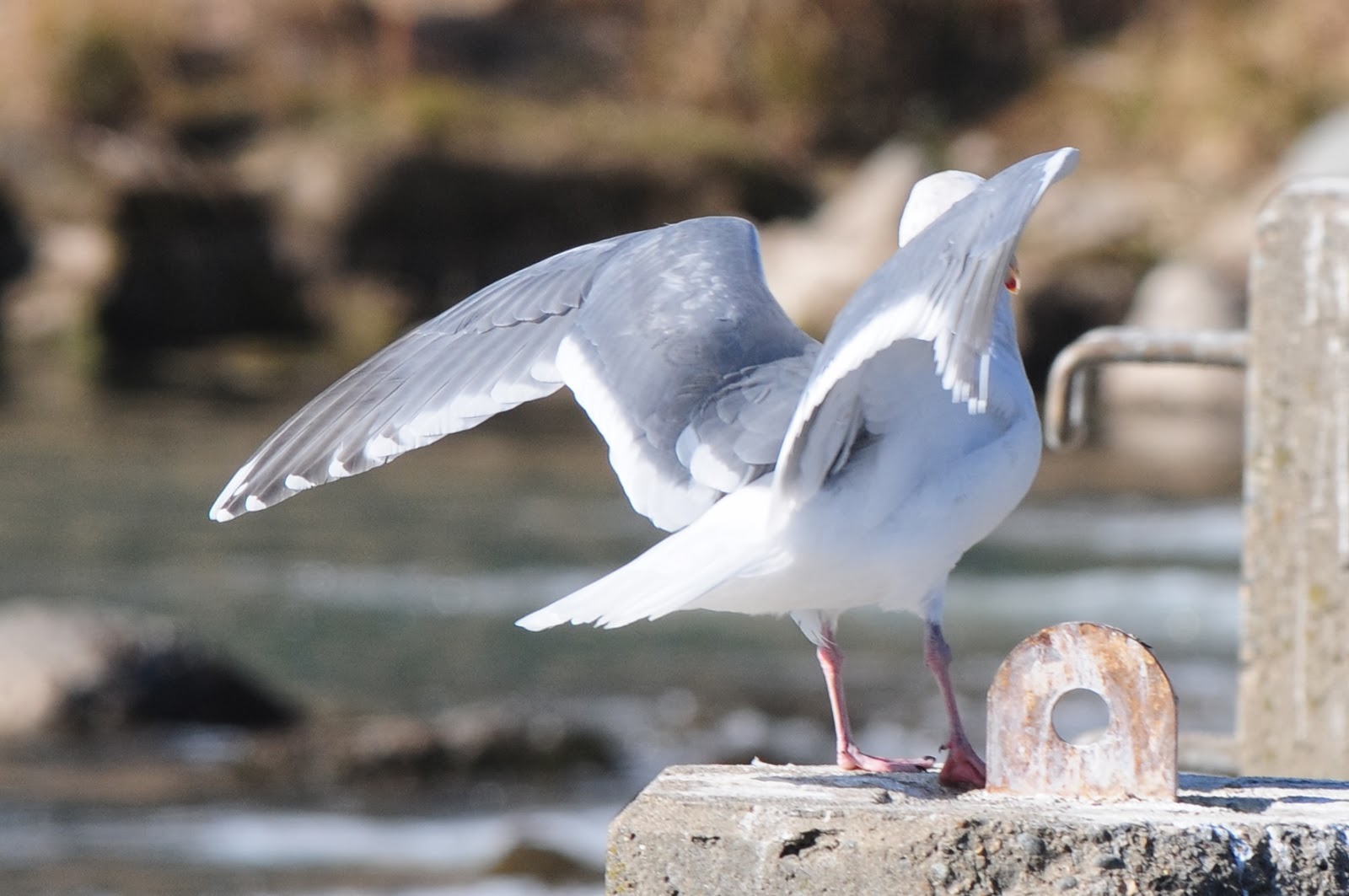 It's not a great shot but this is an adult THAYER'S GULL that flew over Nimbus the other day.  Note the extensive white on the underside of the primaries: 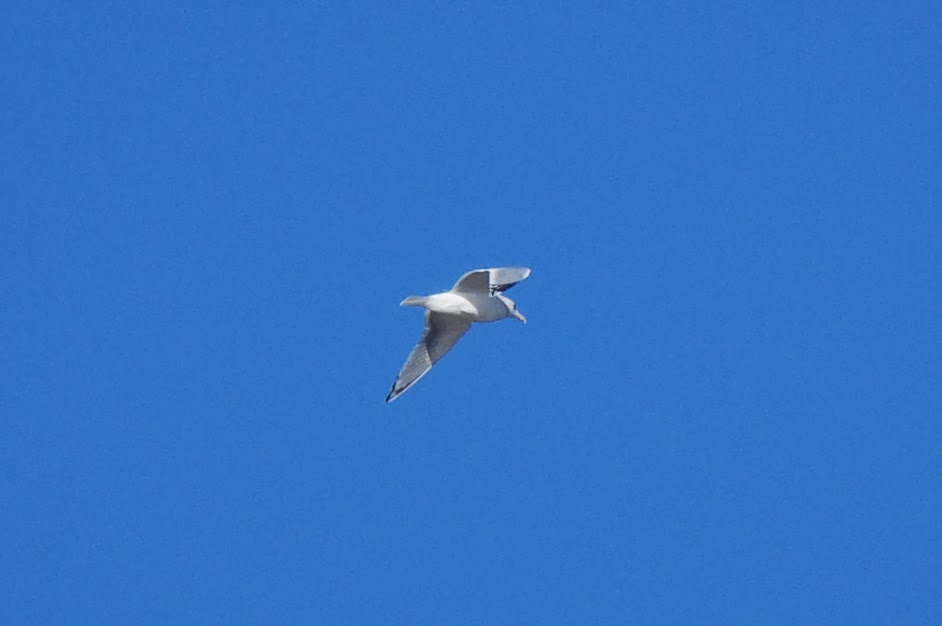 In addition to the ducks and gulls that will probably keep you busy for a bit, there are other various things to ponder.  One such wonder is this famous PEREGRINE FALCON which has mastered the art of catching the local WHITE-THROATED SWIFTS! 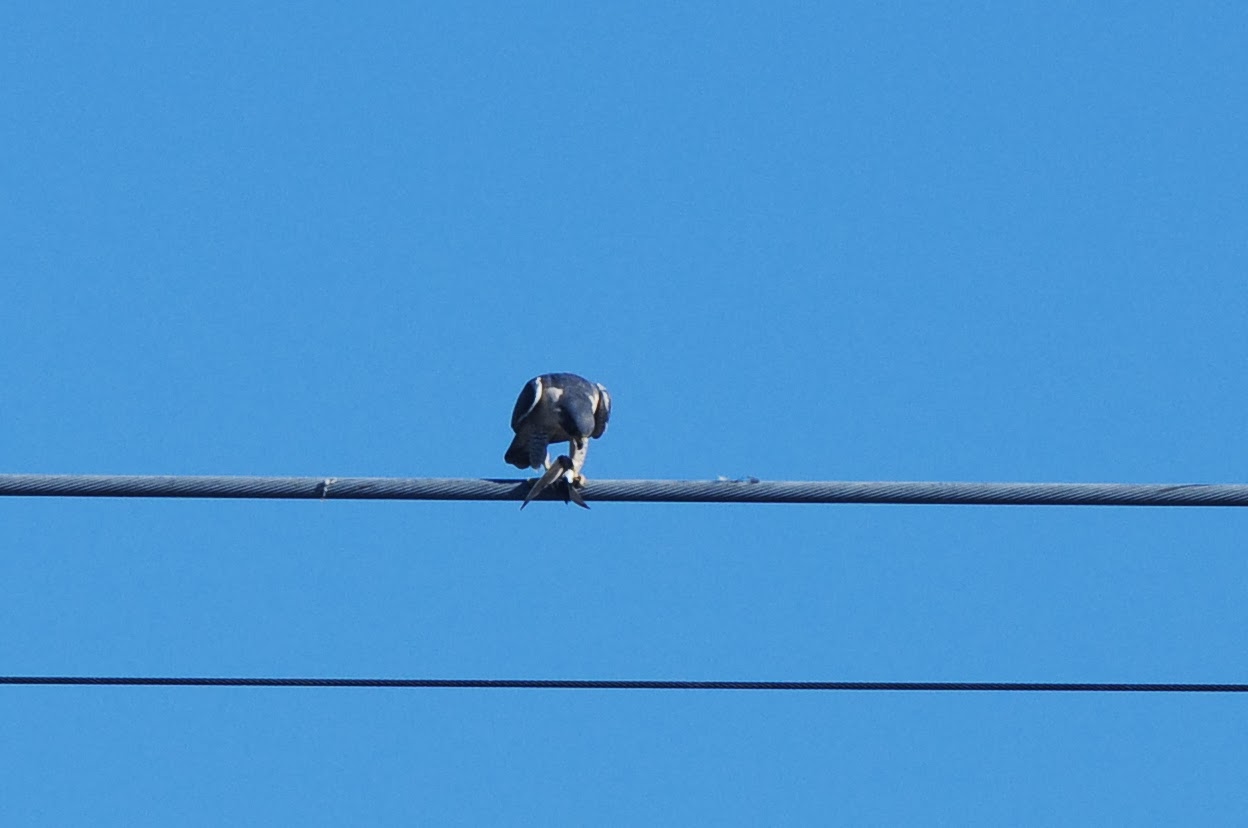 Yes, WHITE-THROATED SWIFTS are common here year-round; I had 30-40 during my last visit.  But hold on, this species of swift is suppose to be one of the fastest fliers on the planet (after all, their speeds have been estimated to reach 200 mph!).  How on earth would a falcon deal with that?  Well, by being THE fastest flier on the planet.  So here's a swift sorry to the sorry swift.

Much less common at this particular location is ROCK WREN.  I found this bird feeding on the rocks along the fish ladder (yes, on the other side of a chain-linked fence, as you can see) 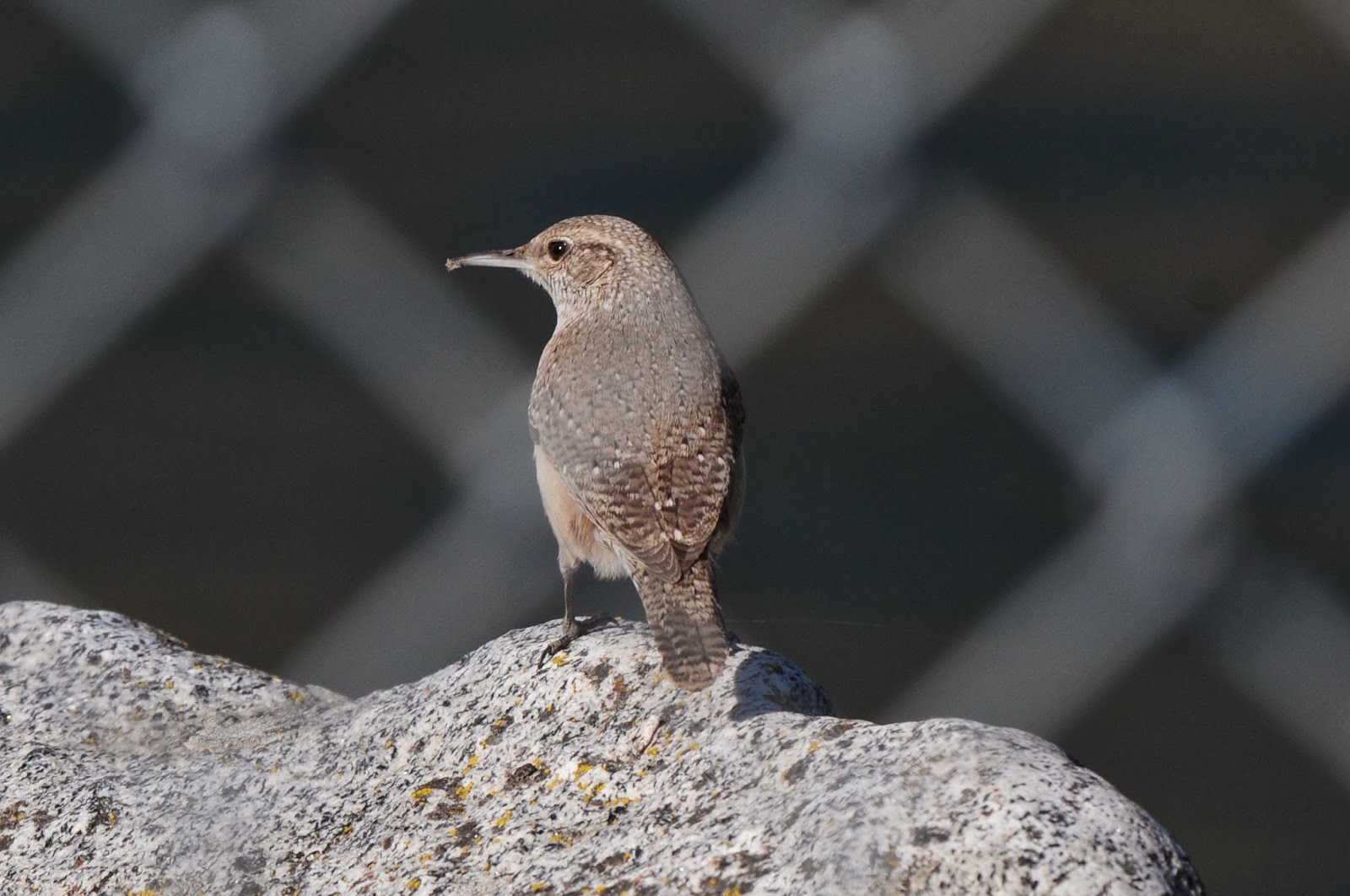 Turns out, this is only my 3rd sighting of ROCK WREN(S) for Sacramento County and the first away from Folsom Lake (which is the main, reliable location).