Until today, I had never laid eyes on the reclusive CONNECTICUT WARBLER.  I have heard them numerous times (including this spring already in Michigan) but they have always eluded me.  Well, today that changed.
I bushed-whacked through Emma McCarthy Lee Park and Brookside Park here in Ames.  After stomping through the forest at Brookside for a couple of hours, an adult male CONNECTICUT WARBLER popped up and perched in a small tree about 15 feet off the ground.  The giant, mondo white eye-ring was so incredibly obvious, it's not even funny.  By the time I reached for my camera, however, it didn't feel like being seen anymore.  I guess I have to live with that.... and so do you.
Here is the general area that I flushed the bird from:
View CONW in a larger map
The habitat was interesting to me; it was in the middle of the forest but with a fairly open midlevel.  It had considerable ground-cover; a layer of nettle about 1 foot high and numerous downed tress/limbs creating some tangled areas.  Together, it made for tricky walking (wet logs you can't see are surprisingly slippery, just ask my shins).  Here is the habitat that I flushed the CONW from: 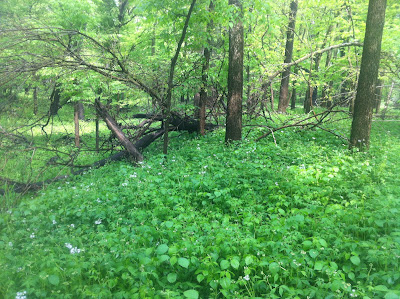 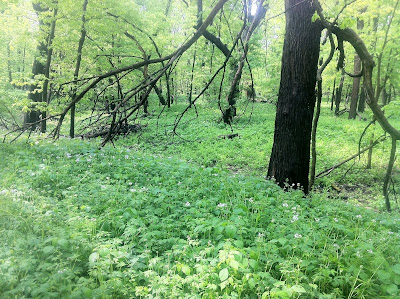 The same area was great for MOURNING WARBLERS and OVENBIRDS as well as numerous thrushes and other warblers.  In fact, I tried to make this female MOURNING WARBLER into another CONW but, alas, it's definitely not.  However, this WAS the first female MOWA I had seen this spring in Iowa: 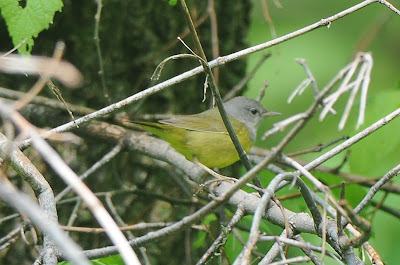 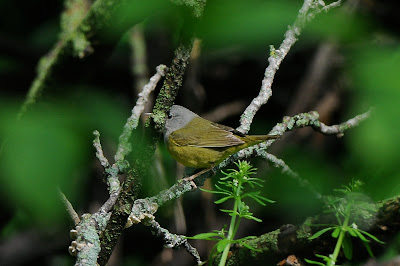 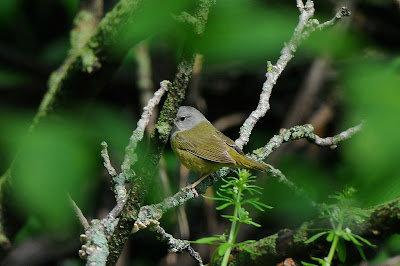 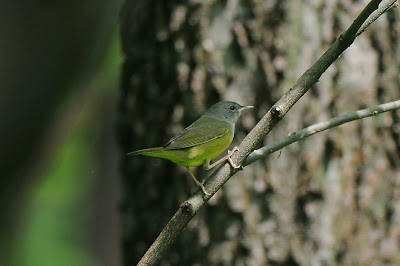 So both parks combined to yield 19 species of warblers this morning:
Golden-winged Warbler
Tennessee Warbler
Nashville Warbler
Northern Parula
Yellow Warbler
Chestnut-sided Warbler
Magnolia Warbler
Palm Warbler
Blackpoll Warbler
Blackburnian Warbler
Black-and-white Warbler
American Redstart
Ovenbird
Northern Waterthrush
Connecticut Warbler
Mourning Warbler
Common Yellowthroat
Wilson's Warbler
Canada Warbler
The number of MOURNING WARBLERS and OVENBIRDS was impressive to me, I tallied 8 MOWAs between the two parks (4 at each).  The first four at EMLP were all singing this morning.  I estimate a total of 14 OVENBIRDS between the two parks and yet very few were heard singing.
Thrushes were in good numbers today with easily 30+ SWAINSON'S THRUSHES between the two parks.  I also had 6-10 GRAY-CHEEKED THRUSHES including several that were in full-song (which was a first for me here in Iowa).  Lastly, I had my second VEERY of the spring at Brookside.
Empids were around in big numbers as well.  Brookside Park had at least 7-8 YELLOW-BELLIED FLYCATCHERS, some at eye level.  The ACADIAN FLYCATCHER remains at EMLP; it was singing again this morning.  Other empids such as LEAST FLYCATCHERS and WILLOW/ALDER FLYCATCHERS were also numerous today.
Regarding vireos; besides the common species, I also had a PHILADELPHIA VIREO at Brookside Park: 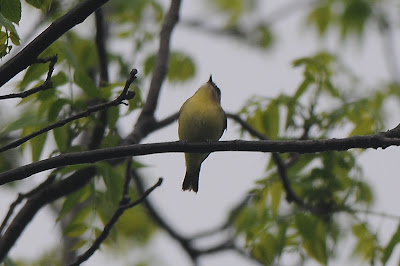 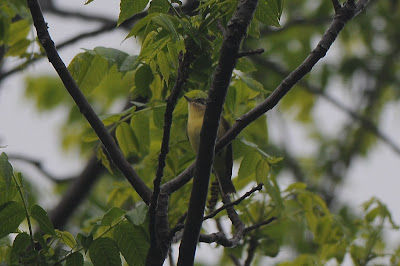 The PALM WARBLER is almost getting-late so I snapped a grainy picture of it: 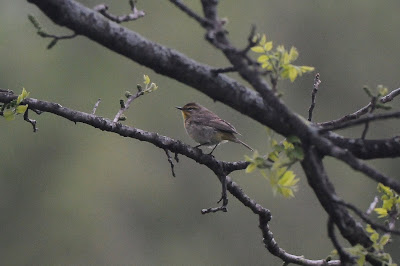