The birding at CLNWR has all but slowed to a standstill. Although it is June already, I was lucky to have a couple new birds for the season.

We had our first CASSIN'S SPARROW of the season back on 2 JUNE. This date is one day earlier than my previous early date. Unlike sightings in previous years, this bird seemed to be preferring a sandsage/grass habitat. Previously, I had CASP's only in yucca-dominated grasslands.

A first for the refuge for me, we also had a couple CALIFORNIA GULLS up at Goose Lake. I thought this species would eventually show up... but I think it was a lack of effort on my part instead that kept this bird off my lists the previous 2 summers.

A GREAT CRESTED FLYCATCHER continues to hang out around the headquarters. In fact, I took this picture from my porch: 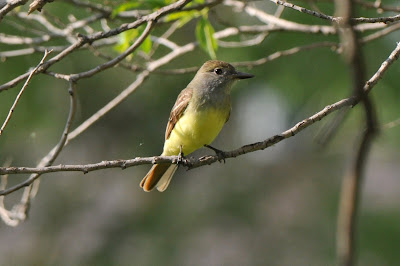 I got excited when I saw this hairstreak sitting open-winged out on some sage the other evening. However, it's just the "common" GRAY HAIRSTREAK. So much for a wierd, sage-specialist: 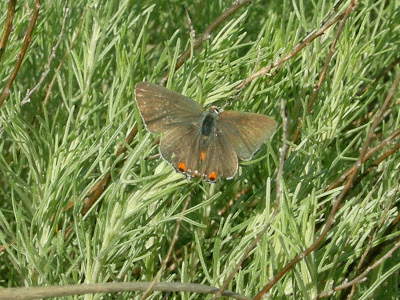