Ashley and I went out birding today around Story County.  The most unexpected bird today was a LOGGERHEAD SHRIKE that we found in NE Story County (it actually flew across the road into Marshall County as well).  See Ashley's photo below: 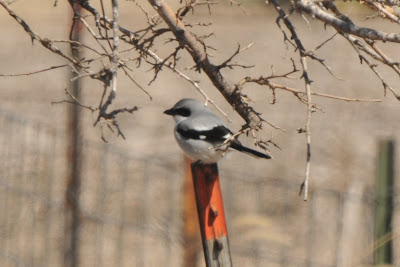 Some of the wetlands around Colo provided some waterfowl including all (5) usual geese species:
Snow Goose (20)
Ross's Goose (20)
Cackling Goose (2)
Canada Goose (10)
Greater White-fronted Goose (~300)
Canvasback
Ring-necked Duck
Green-winged Teal
Blue-winged Teal
Mallard
Gadwall
Northern Shoveler
American Coot
Pie-billed Grebe
The below Pie-billed Grebe also stayed still while Ashley got to photograph it (or maybe it was frozen stiff?  The windchill this morning was about 10 degrees). 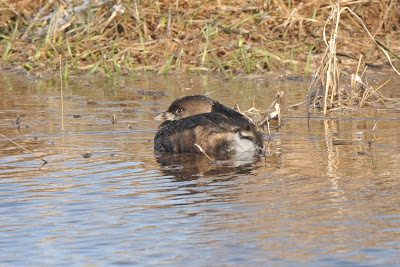 We also found several Wilson's Snipe near Colo.  Later in the day, one posed nicely (see Ashley's photo below): 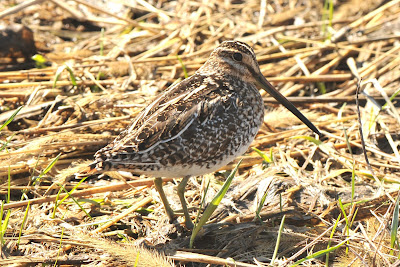 We came across several enormous flocks of LAPLAND LONGSPURS throughout the day.  The day total would easily be a couple thousand.
We also found RUSTY BLACKBIRDS in several locations today which as a treat.  Thinking back, I think it has been several years since I've come across some...
Good Birding,
Cory Gregory & Ashley Casey
Posted by Cory J. Gregory at 3/29/2009 03:59:00 PM