Today was our last day in Mexico.  However, our shuttle didn't come until after noon!   Hence, one last chance at new birds!  Nathan and I headed 20 minutes north in a taxi until we stopped at a coastal lagoon.
The early morning was rather dampened by RAIN of all things.  It was the first rain I had seen the entire week and it happened to fall while we were out birding.  Alas, it didn't last all that long and we were still able to bird a bit.
The actual lagoon had hundreds of shorebirds and a good variety of gulls, terns, waterfowl, etc.  I must admit, I feel a tad obligated to post a picture of a Long-billed Curlew!!  Although I don't work with them on the wintering grounds, it'll be a matter of weeks before I see them on the breeding grounds in Nebraska.  Here is a female:
We heard a curious bunch of scolding birds and after tracing it all down, we found the source, a Colima Pygmy-Owl!  It was obscured by brush but I managed this quick photo before it flew on: 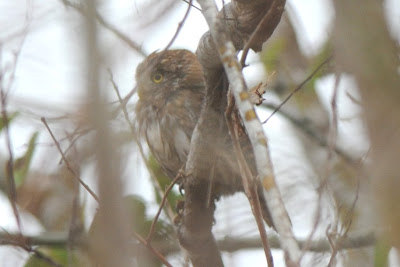 We came upon a tree with several Black-throated Magpie-Jays, a northwest Mexican endemic.  These jays with their incredibly long tails were a treat to both see and photograph:

Last but not least, the Sinaloa Crow was a common species during our stay in Mexico.  Flocks were constantly beeing seen along the road.  I snapped a quick shot in flight:

Overall, we had great luck, even picking up a flock of Elegant Quail along one of the roads!  Unfortunately, I had to quickly return to pack and get ready for the shuttle to arrive.