We went birding first thing in the morning today.  We checked out some of the lagoons further south and were greeted by many new species for the trip.  Considering my new camera gear and the fact that I didn't really wanted to get robbed, I decided NOT to haul it through the city hence the lack of photos from the morning.
However, like yesterday, most of the time today was spent going to talks for the conference.  However, I continued to bird the gardens at the hotel in addition to walking some on the beach.
About 1/4 mile south of the hotel was a rocky outcropping of rocks along the beach.  These rocks provided numerous shorebird species throughout the week.  Pictured below are Surfbirds.  Initially there were a couple, then 8, and then over 50! 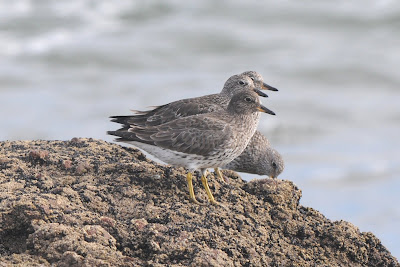 Back at the hotel, I finally caught up to a Cinnamon Hummingbird, pictured below:

Along the beach at the hotel, gulls were never hard to find.  The below Heerman's Gull was one of the species that would frequent the area:
By far the most common species at the hotel, White-winged Doves were easy to photograph:

A little less common than the White-winged Doves but still quite common, Ruddy Ground-Doves would frequent the feeders at the hotel: