We did something rare... we went to a concert: 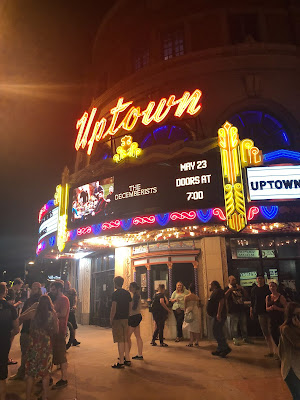 The Uptown Theater in Kansas City was hosting one of my favorite bands, The Decemberists.  Although Ashley and I saw them in Minneapolis many years ago, it was fun seeing them again.

Annnnnnd since you know I can't post without something bird-related, I'll admit that we did some county listing while we were on the west side of the state.  We ventured through a couple of new counties which helped to shade in my Missouri eBird map a little: 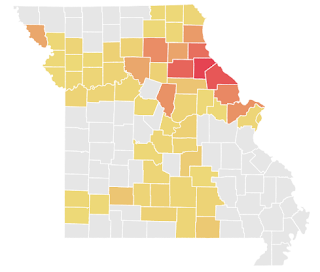 I'd say we had two main stops where we put effort into birding.  First was Swan Lake NWR in Chariton County.  We tallied 72 species in 2-3 hours which seemed decent enough.  Here's our checklist.  Then up in the NW corner of the state, we spent 2-3 hours at Loess Bluffs NWR in Holt County.  Again, our tally was in the 70s but this time it provided a new state bird for us... our first YELLOW-HEADED BLACKBIRDS finally.  It also was hosting some nice shorebird habitat still and we ended up with 10 shorebird species including DUNLIN, STILT SANDPIPER, WHITE-RUMPED SANDPIPER, BLACK-BELLIED PLOVER, etc.  Here's our checklist.
Posted by Cory J. Gregory at 5/25/2018 11:13:00 AM