I'm actually slated to fly to Maine in a few hours... so what better time to throw together a quick blog post!

Although I've spent a lot of my downtime between tours working on various things indoors, we certainly have gotten out here and there.  Sometimes we didn't have to go far to find fun things.  Case in point... I was in the bedroom with the window open when I heard a buzzy song coming from outside... my ears perked up.  I got up, stuck my face right up to the window... heard it again.  Thinking it was worth a better listen, I walked out onto the front porch... there it was again.  Ok, it was time to grab bins/camera, put on my boots, and go find this songster.  I did, next to the driveway.... it was the 1st Ralls County record of CERULEAN WARBLER: 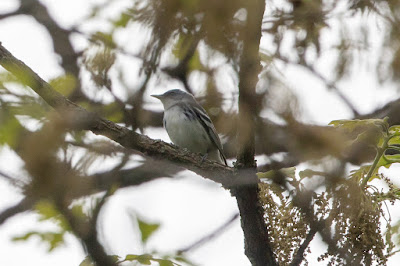 I also got some recordings of him singing and embedded those into the eBird checklist here.  It was pretty cool finding a new species for the county... from the yard.  I'm not too terribly surprised, however; the ravines near here look good to my eye for breeding Ceruleans and I know they breed a short ways to the north in Hannibal.

Not quite as rare on the property (but still certainly uncommon) was this ACADIAN FLYCATCHER we found singing: 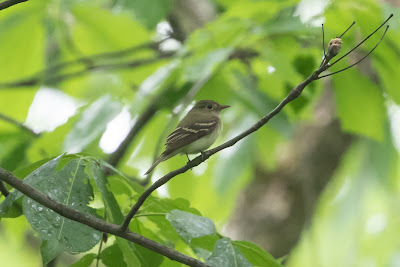 This was only the second one I've had on the property.  Again, I'm not surprised; I think they could easily breed in the surrounding forests.

One species that DOES certainly breed on the property is KENTUCKY WARBLER.  Turns out, they're actually the most common warbler we have here (3-4 territories).  Every morning starts with this songster belting out his chanty song outside our window: 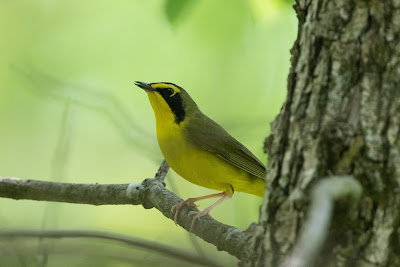 Another skulky warbler species we've had in the yard lately, and this one only a migrant here in Missouri, is MOURNING WARBLER.  He didn't want to pose but I captured an image of him anyway: 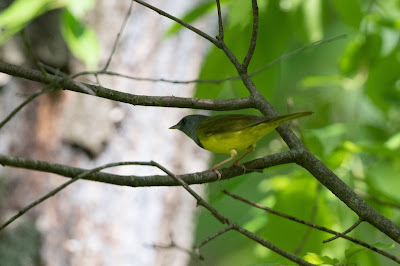 There is a creekbed, which is usually dry, that borders the property.  This year we've been pleased to welcome a breeding pair of LOUISIANA WATERTHRUSHES!  Although these seem quite quiet by this point of the summer (no need to draw attention if you already have a nest/young, I suppose), I did bump into one of them doing some whisper singing: 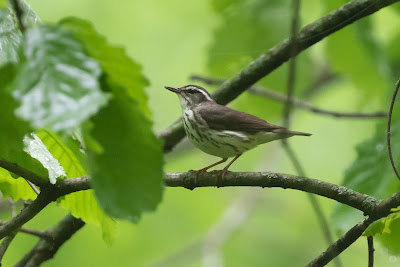 A common breeder here is the FIELD SPARROW.  Here's one from the front yard giving me some cute stink-eye: 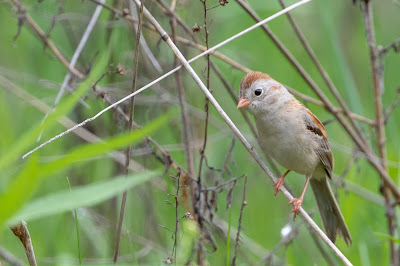 If given the chance, I always like checking out what butterflies are flying here on the property too.  Here's a LITTLE YELLOW that was darting around a clearing back in the forest: 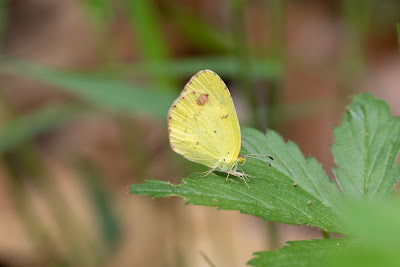 Yep, it was little and it was yellow.  Well done.

Ok, I DID actually leave the yard at some point.  We birded Mark Twain Lake and had a variety of migrant shorebirds still poking around.  One of them, a SANDERLING, was a fairly uncommon sighting (for me, at least).  It's the larger, paler bird coming in for landing here: 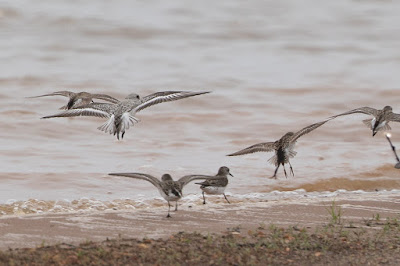 It did a couple of nice flybys too: 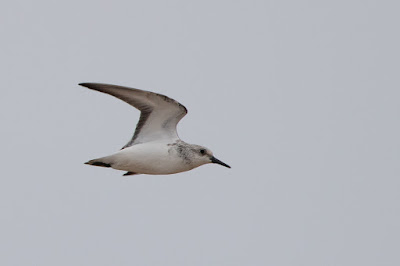 You can find the same photos embedded in the eBird checklist as well.

In driving around various country roads, it's not uncommon to find weedy fields and old barns, like this view: 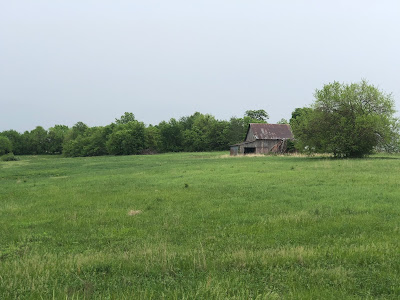 Sometimes the edges have shrubs that attract common species like BLUE GROSBEAKS, ORCHARD ORIOLES, and BELL'S VIREOS.  Here's one of the latter, looking quite wet after a rainy start: 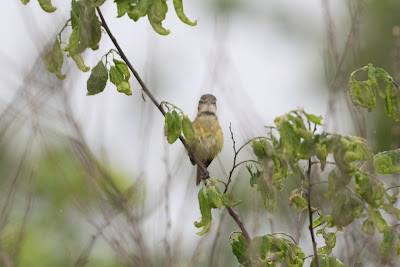 All in all, spring really is a nice time to be in these parts.  The stifling heat hasn't really cranked up yet, you get to enjoy periodic thunderstorms passing through, and a lot of the birds are still in song especially at dawn.  It's downright pleasant.