It's been a month since my last update which, sadly, seems about average.  However, I did do a tour in April though, to Big Bend and the Hill Country of Texas.  I joined Chris Benesh who does that tour every year.  In fact, I did it with Chris in 2016 as well.  You can find more info about this Field Guides tour here.

We start the tour in San Antonio and immediately start driving due west.  It doesn't take long to start seeing SCISSOR-TAILED FLYCATCHERS perched on the the fences and powerlines.  Here's one at a rest area that swooped over, resulting in one of my favorite images: 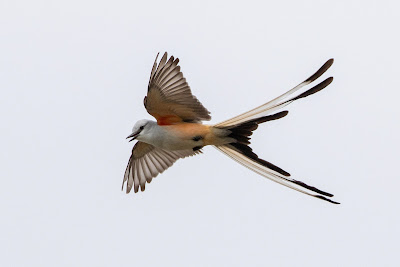 We spent a morning birding in the town of Del Rio which is, not surprising given the name, right on the Rio Grande.  We had a slew of fun and interesting species (checklist here) including this male PAINTED BUNTING: 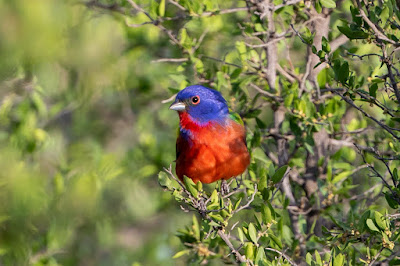 ... and this WHITE-COLLARED SEEDEATER: 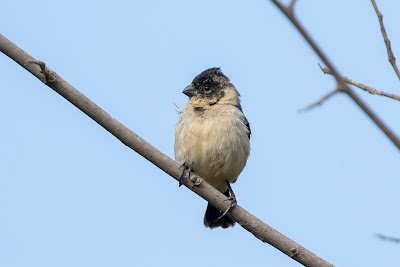 This is about as far north in the US that you can find seedeaters.  It's a local species anywhere in the states and so it was a real treat for us to see these so well.

Once in Big Bend National Park, we spend 4 nights at the Chisos Basin Lodge which is a superb spot; it's host to interesting mammals and birds, incredible night skies, and stunning desert vistas.  Sometimes you can see SCOTT'S ORIOLES from the parking lot.  Here's one from down the trail a bit: 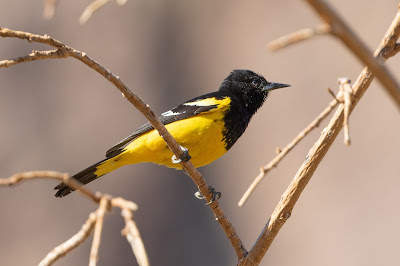 We hiked up Blue Creek Canyon on one of our days there.  Here's our group heading there first thing in the morning: 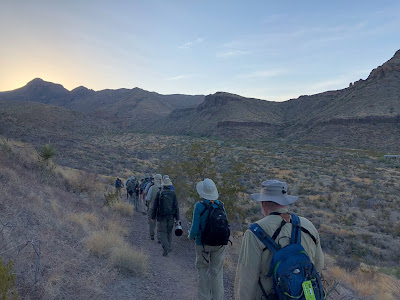 Our main highlight there was finding the rare LUCIFER HUMMINGBIRD, a species that's barely reliable anywhere in the US.  Here's our list for that hike.

One of the main reasons birders visit Big Bend National Park is to hope for the COLIMA WARBLER.  In the US, Big Bend is the only place to see it!  Granted, it's a pretty serious hike, about 5 miles up into the mountains (and then another 5 miles if you want to return to the lodge!).  This year, we were again successful in finding this specialty: 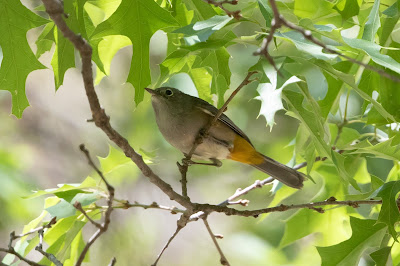 The hike, which we spend all day doing, usually yields a variety of species though like BLUE-THROATED HUMMINGBIRD and PAINTED REDSTART up in the Boot Springs area (checklist here).  There are often HERMIT THRUSHES around too like this one: 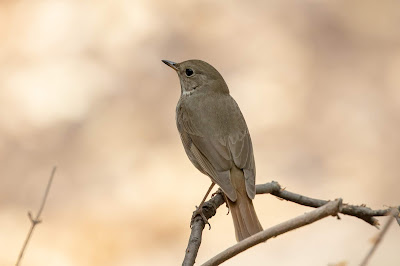 We stayed several days in Big Bend and visited a wide range of the birding spots including the Cottonwood Campground, Rio Grande Village, Sam Nail Ranch, Dugout Wells, etc.  A fairly common species at many of those spots is the bright VERMILION FLYCATCHER: 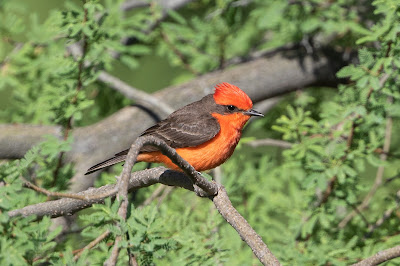 After Big Bend, we drove north to the Davis Mountains to spend an evening/morning there.  Although we didn't cross paths with any Montezuma Quail, we did have a fun encounter with a pair of ELF OWLS at a nest hole.

Then on to Balmorhea Lake which is always a migrant trap for waterbirds and shorebirds.  This year, our rarest find was this sleeping LAUGHING GULL back and left of the FRANKLIN'S GULL: 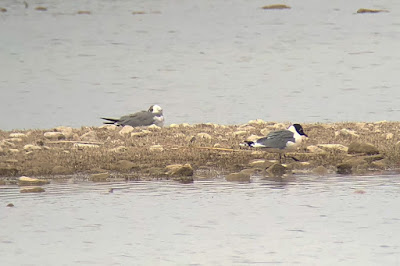 This Laughing Gull was the 5th Reeves County record all-time.  Anyway, here's our eBird checklist for this birdy spot.

Then it was on to the Hill Country back to the east.  One of main targets there is found at Lost Maples SNA... the endangered GOLDEN-CHEEKED WARBLER.  We found this one that performed very well for the entire group: 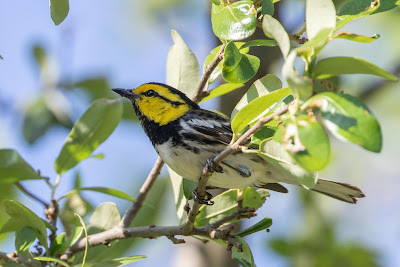 This species of warbler, by the way, is the only species of bird that breeds solely in the state of Texas.

That particular sunny day and abundance of flowers gave way to quite a nice showing of butterflies.  Here's a GULF FRITILLARY on a thistle: 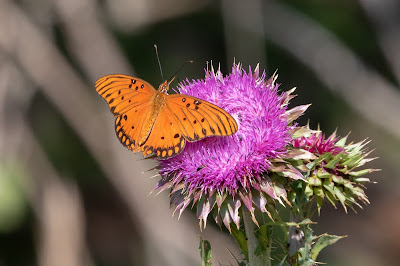 There were also some cool dragonflies around too including this PRONGHORN CLUBTAIL which was new for me: 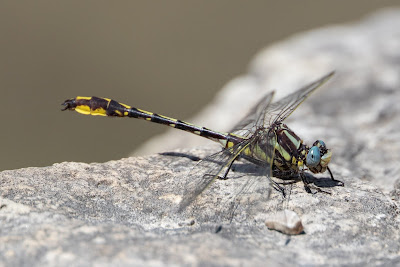 At Neal's Lodges, which was our home for 3 nights, there is a river that we birded along a couple of times.  When the birding was slow, we managed to find some local damselflies there instead.  Here's a pair of COPPERY DANCERS: 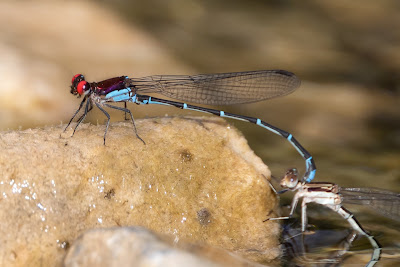 This is a very range-restricted species within the US; it's only found in a small area of south central Texas.  Truth be told, I was pretty clueless about most of these damselflies but thankfully Chris also has an interest in this stuff and kept suggesting I take a look here and there!

We also got to study some parulas at Neal's Lodges.  Here's one we were hopeful was a Tropical Parula: 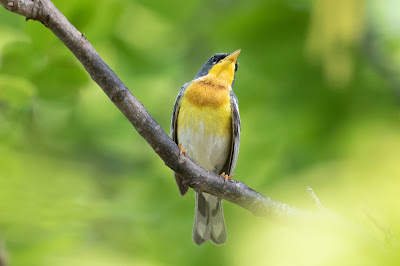 However, you might see a tiny dot of white under the eye.  Significant?  Well, that little dot tells us that this is actually a hybrid between Northern Parula and Tropical Parula (Northerns have white crescents under the eyes, Tropicals don't.  This was a mix).  Interestingly, Chris recorded and analyzed the songs (which can be VERY similar) and found that the song it was singing was a closer fit to Northern Parula (although it looks more like Tropical).  Anyway, if any of the listing purists are paying attention, you better watch what you count as a Tropical at Neal's Lodges!

Another main target in this part of Texas is the now-NOT-endangered BLACK-CAPPED VIREO.  They can be super skulky but this one eventually popped out for all to see! 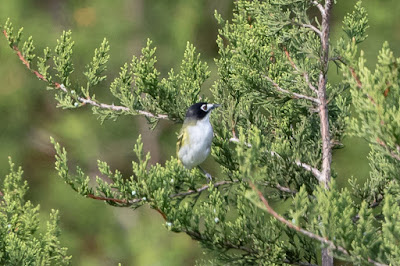 We end this tour with a visit to a bat cave near Concan.  The first time I visited here in 2016, I didn't think it would be that impressive.  But, I have to say, this is one of the more spectacular things I've ever watched.  If you ever get a chance to visit, I highly recommend it.  Basically, you stand near the opening to this cave as dusk approaches.  Then, all of a sudden, thousands upon thousands of BRAZILIAN FREE-TAILED BATS start pouring out of the cave: 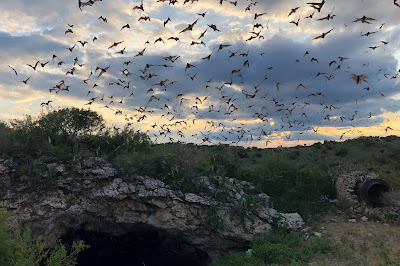 How can you put this into words?  It's a stream of bats that pour from the cave for multiple hours.  How many bats come out?  About 13... MILLION.  It's jaw-dropping. 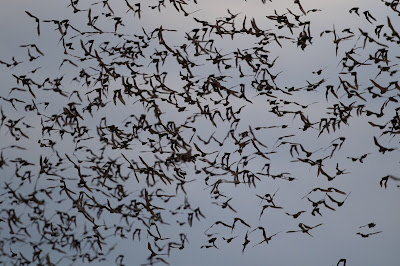 And with that, our tour concluded back in San Antonio!  We tallied 200+ species of birds which is mighty decent for staying within Texas.