Hardly.  The Dorset culture settled in Newfoundland 4,000 years ago.  Hold on, hold on... I'm getting ahead of myself.

It seems to be tradition now to start my posts with "Wow, I'm REALLY behind".  In truth, it HAS been a busy guiding season and, yes, I AM really behind in posting to my blog.

I left off last time after guiding in Maine.  Well, I was lucky to return to the northeast, this time to Newfoundland and Nova Scotia (our Field Guides tour page here).

We started around St. John's, the capital of the province, where we snagged a few oddballs like this TUFTED DUCK that oversummered with a tame flock of ducks.  This species is typically found overseas in places like Europe and Asia.  This one was keeping an eye on me though: 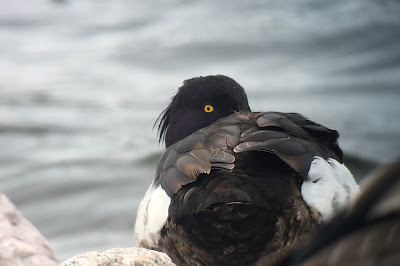 We drove out to Cape Spear (the easternmost point in all of the US or Canada) where it was a beautiful sunny day.  Here's our group looking east.  The next land in that direction?  Ireland! 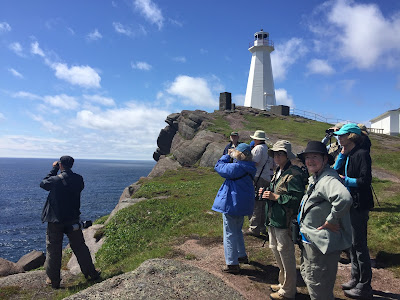 Although we were in Newfoundland in the summer, we still managed to find an ABA Code 3 BLACK-HEADED GULL in St. John's (they're fairly common there in winter though).  At one point it flew right by us... 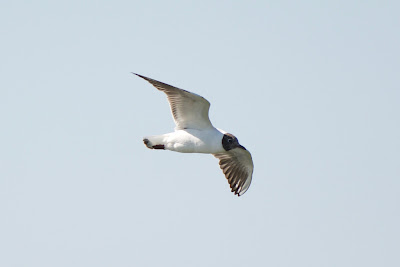 One of the enjoyable aspects of this tour was being in the breeding range of a variety of warblers.  Although BLACK-AND-WHITE WARBLER is a fairly widespread species, and one you probably know well, we enjoyed getting to see these quite nicely: 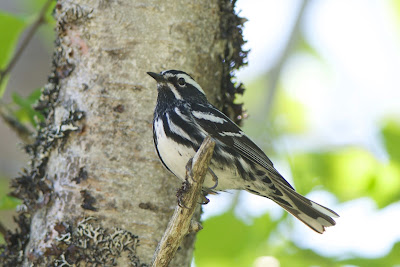 We tallied some nice finches too including PINE GROSBEAK, COMMON REDPOLL, PINE SISKIN, PURPLE FINCH, and some RED CROSSBILLS: 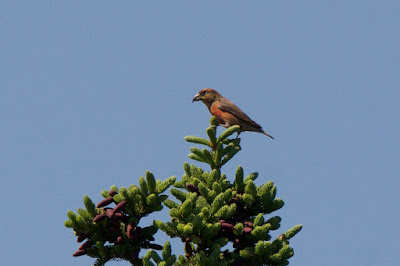 These aren't your average crossbills though... these are the Type 8 birds, L. c. percna, an endangered subspecies that is probably endemic to the island of Newfoundland.  I say "probably" because, although they've never been proven away from Newfoundland, it's thought they might wander to Anticosti Island in nearby Quebec.  Either way, we were happy to see this uncommon finch!

Being in Newfoundland was cool and all but it wasn't until we found ourselves on proper tundra that I felt like we were TRULY up north.  The reason is simple... the tundra was hosting a couple of northern specialties that morning like CARIBOU and this WILLOW PTARMIGAN! 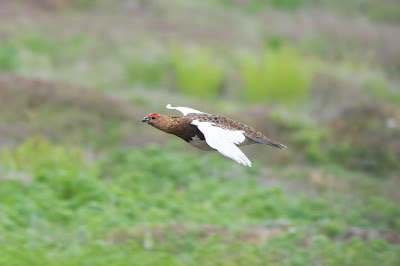 Before this, I had only seen this species of ptarmigan in Alaska!  It put on a great show too, as you can see, flying in right next to us.  This would end up being one of the major highlights of the entire trip.

This tour was a good one for northern terns too.  Here's an ARCTIC TERN that spent several minutes flying alongside our vehicle: 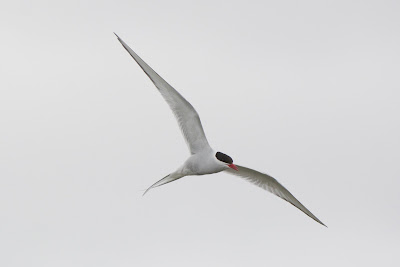 Speaking of northern specialties, it's hard to go wrong with the wheezy-sounding BOREAL CHICKADEE, right?  You can see the brown cap nicely on this bird near Placentia: 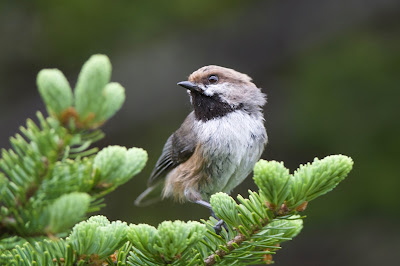 I can't imagine a better place in all of North America to see NORTHERN GANNETS than at the Cape St. Mary's colony.  We found ourselves face-to-face with 20,000 of these large seabirds, one of the largest gatherings in the world.  It was truly amazing! 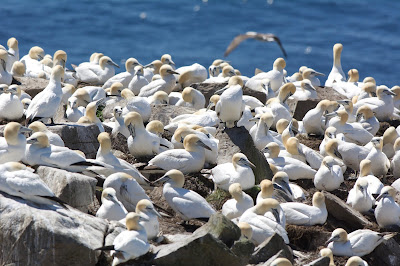 Tucked away from the gannets, this RAZORBILL also was catching some rays at Cape St. Mary's.  It's a sharp-looking alcid, that's for sure: 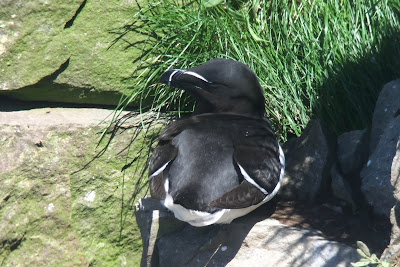 This tour includes a ferry from Newfoundland to Nova Scotia.  Being on such a big boat, it's uncommon for people to get too woozy.  I was thankful of this especially since I was on the lookout for a tiny, dark seabird.  The LEACH'S STORM-PETREL had been at the top of my "most wanted" list for years and this ferry ride is known to have them.  So imagine my glee when I spotted one of these little dudes cruising along just above the wave tops: 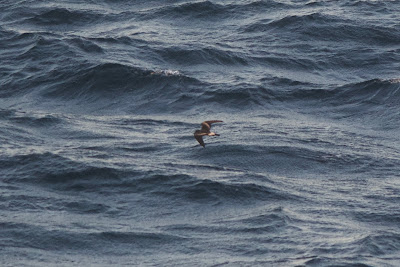 Woo hoo!  As you can see on the sidebar on the right side of this webpage, it's one of only 2 new ABA birds so far for me this year.

Once on land in Nova Scotia, we hit the ground running and saw specialties like GREAT CORMORANT and even some NELSON'S SPARROWS singing from right in front of us.  Our lodge was glorious too... the grounds hosted WINTER WRENS, HERMIT THRUSHES, and even this male BLACK-BACKED WOODPECKER! 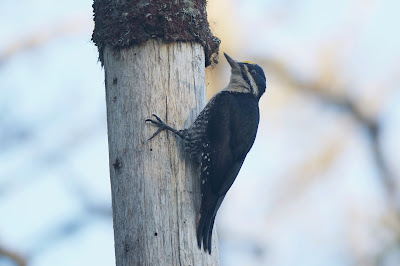 Nearby, the lush, more southerly-feeling forests hosted a whole new range of birds like BLACK-THROATED GREEN WARBLERS, NORTHERN PARULAS, and EVENING GROSBEAKS.  We even found this BLACK-BILLED CUCKOO singing! 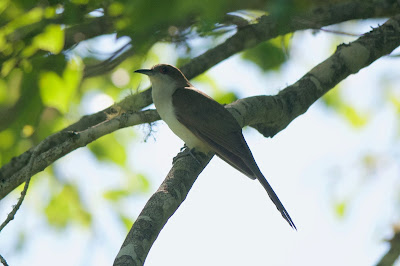 This species is fairly scarce and one you're not likely to bump into too often.  We soaked it up, watching it through our scopes as it sat and sang.  Exceptional!

This MOURNING WARBLER also put on a fantastic show for our participants.  Although usually secretive, this one came out and sang from a perch for several minutes.  Here's a scope view of what we were looking at: 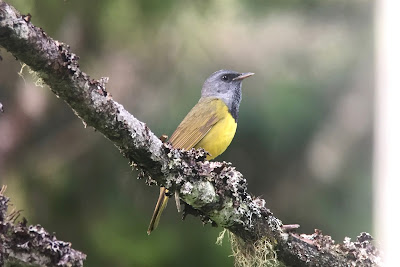 I should mention that we take note of all the mammals we see on tours as well.  Naturally, being up in this part of the world, we were keen to see some MOOSE.  We did just that, tallying 8 or so.  Here's one that's, you know, belly deep in a lake: 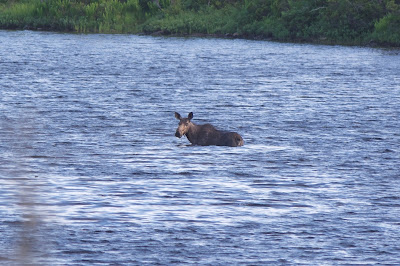 Staying in the mammal theme, this GRAY SEAL looked pretty pleased with herself too, getting the rock-top spot! 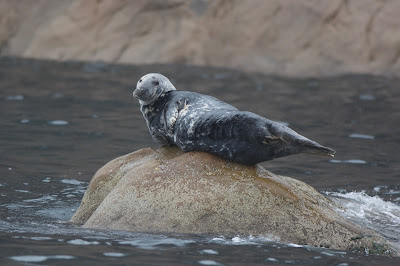 Of course,  I couldn't limit myself to just birds and mammals either!  Here's a FOUR-SPOTTED SKIMMER, a species of dragonfly, that posed nicely for a bit: 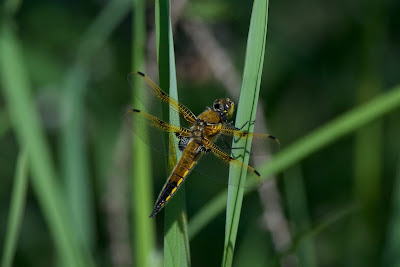 Even the range-restricted SHORT-TAILED SWALLOWTAILS were out in force: 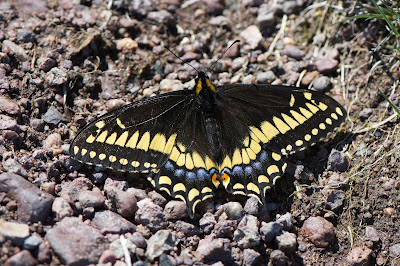 And, ok, you caught me... I'd snap photos of non-living things too once in a while.  For example, here's an iceberg off the east coast of Newfoundland.  I think this was my first East Coast berg!

All in all, it was a fun trip and I'd like to thank the lead guide, Chris Benesh, for his expertise in birding these spots.  As it turns out, I'm slated to join him again for this tour next year.  Interested in joining?  Visit our Field Guides webpage for this tour here.