Arizona: Put some "Second Spring" in your step

You know the drill... I'm here trying to catch up!  I have a few days at home before I'm whisked away to co-lead another Field Guides tour so I thought I'd drop in a few photos from the Arizona tour John Coons and I ran in late July.

Wait... Arizona in the middle of summer?  Are you crazy?!  Not quite (but I might be heading there).  The "Second Spring" tour, as you'll often hear it referred to, focuses on southeastern Arizona during the monsoon season which is marked by thunderstorms that rejuvenate the dry deserts and can turn them into lush green landscapes.

How exactly does that work?  Simply put, the monsoon season is a shift of winds.  Typically the winds that blow from the west and southwest into that part of the state are dry.  However, in July and August, the winds shift to the south and southeast which brings up moisture from the Gulf of California.  That moisture, coupled with the heat of summer, fuels the monsoon thunderstorms.

What that means for birds is a new bounty of food and shelter.  Many species actually begin singing and end up breeding during this lush period of the summer.  The grasslands turn into a gorgeous vistas full of singing birds.  It's spring for them... a second spring.

I flew into Tucson a bit early to do some scouting.  We visited the De Anza Trail where I hoped to find a brand new ABA bird... my all-time nemesis, the ROSE-THROATED BECARD.  This time, the nemesis fell... and HARD.  Check it out: 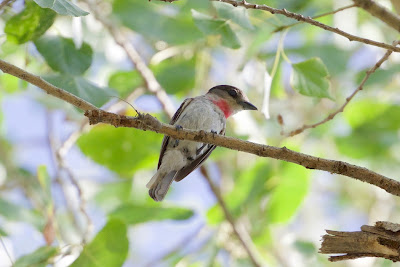 Pretty amped from that success, it was pretty easy to stay psyched for our incoming clients.  We birded near Tucson our first afternoon and came face-to-face with some gorgeous desert species like this BLACK-THROATED SPARROW: 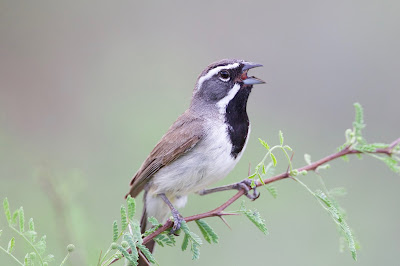 Another bird you're likely to see in that part of the US is the tiny and scaly-looking INCA DOVE: 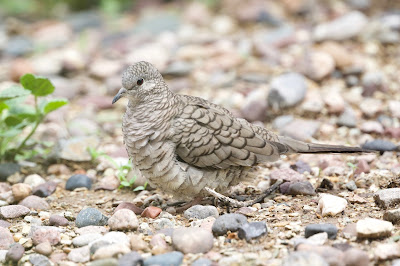 The grasslands I mentioned above really are beautiful during this time of year.  Here's the view early one morning just downslope from Portal:

Those grasslands host species like CRISSAL THRASHER, SCALED QUAIL, CASSIN'S SPARROW, and BOTTERI'S SPARROW, the latter being a regional specialty.  However, it's not until the monsoons hit that the Botteri's become obvious as they sing from low perches.  Here's one doing just that: 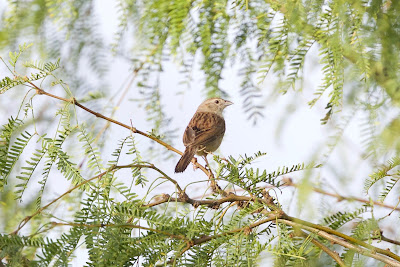 Of course, there is a downside of the monsoon season... the unpredictable storms that can dump huge amounts of water in a short amount of time!  Here is a road that is normally dry but became an impassable river after a storm! 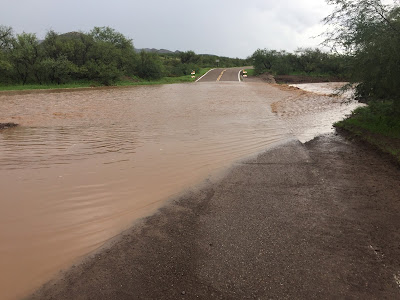 It wouldn't be a tour of southern Arizona without spending time looking for ELEGANT TROGONS!  John, a long-time resident of AZ and our lead guide, had their locations dialed in.  Beautiful looks were had by all! 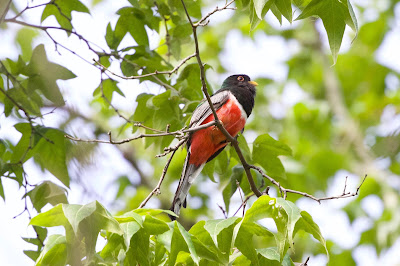 We spent an evening at Mary Jo's feeders in Ash Canyon, a must-stop place if you're ever in the area.  Her feeders were hosting a couple of the rare LUCIFER HUMMINGBIRDS much to the delight of all the birders present: 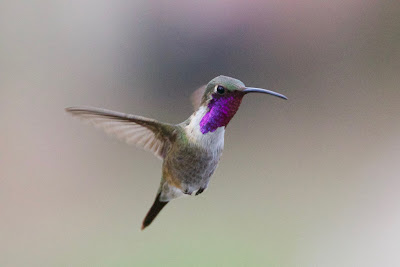 Note that the name is "Lucifer" and not "Lucifer's".  It's not named AFTER someone (or anything religious), it's named after the word lucifer which, in Latin, means "light bringing" or "morning star".  Clearly the hummingbird is an attractive, light-bringing bird!

Although Field Guides has a tour specifically targeting the nightbirds of Arizona, we poked around for nightbirds on this tour too.  We ended up with a nice collection of owls including this WHISKERED SCREECH-OWL in Miller Canyon: 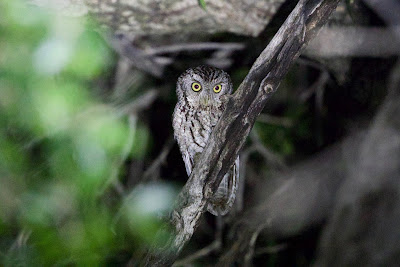 In the above photo, note the pale bill.  Compare that to the dark bill on this WESTERN SCREECH-OWL near Portal: 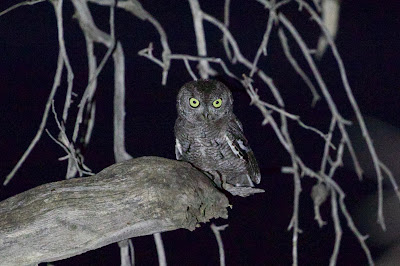 If you've seen a MEXICAN CHICKADEE in the US, you almost certainly saw it in the Chiricahuas of southeastern Arizona.  This regional specialty put on a great show for our tour and we saw many high up in the Chiricahuas: 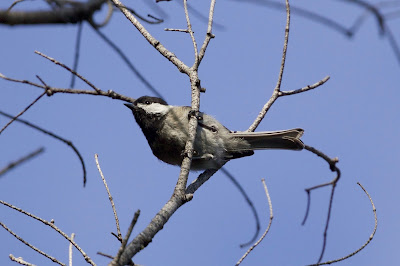 Spending a fair bit of time leading tours in Arizona this year, I've heard about one species in particular over and over again... one quail that jumps to mind when thinking of targets.  The secretive (and often hard to spot) MONTEZUMA QUAIL.  Some people have looked for these for years without luck.  Our tour, I must say, was tuned in because we found these cryptic quail 5 different times in less than 2 hours!  Here's one of the 9 birds we spotted in Cave Creek: 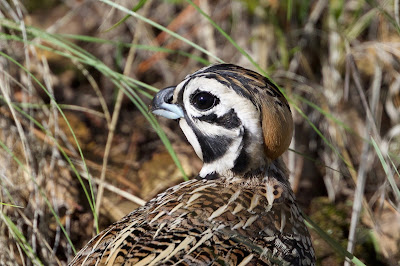 It has a pretty intricate pattern on the head, huh?

It might not be a stop-press kind of bird but we spent a lot of time around the WESTERN WOOD-PEWEES that call the dry Arizonan mountains home.  Once or twice, they perched up nicely within reach of our cameras: 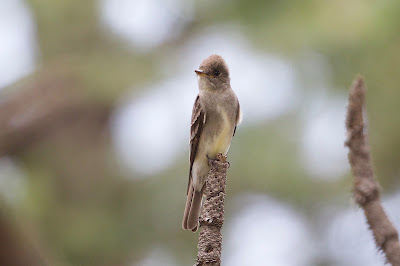 Another regional specialty of Arizona, and a target one is likely to have when you visit, is the THICK-BILLED KINGBIRD.  There has been a pair nesting in Portal lately and we connected with the pair one morning: 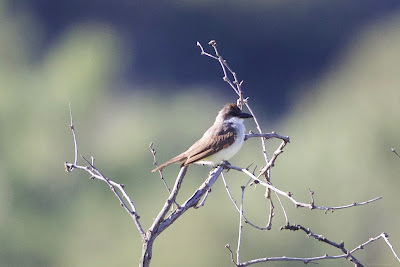 Let's talk Greek for a second...

What do you get?  The PHAINOPEPLA is a silky-flycatcher with a very sleek-looking robe, one could say: 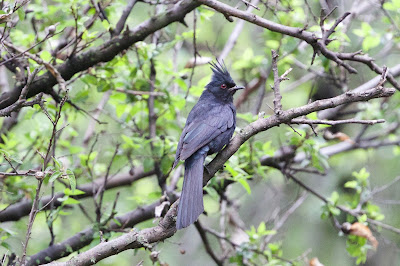 Perhaps one of the most limited breeding ranges of any bird species that nests in the US belongs to the FIVE-STRIPED SPARROW.  In fact, most years birders have to take the bumpy road out to the remote California Gulch to hope to see them.  We made the drive and were rewarded with excellent views of this AZ specialty: 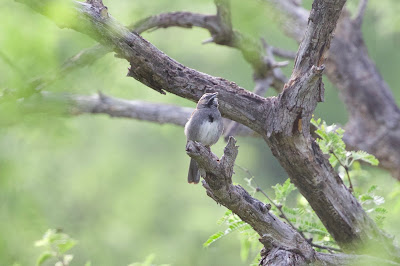 In recent years, southern Arizona has hosted a couple of breeding pairs of BLACK-CAPPED GNATCATCHERS.  This species, which can be completely absent from the US in some years, performed well for us and we ended up seeing at least 2 different birds.  Here's one from Montosa Canyon: 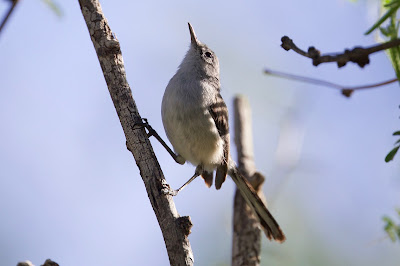 The rarest species we saw was this buffy flycatcher high in the Huachucas: 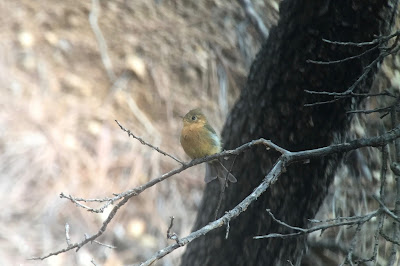 This aptly-named gem is a TUFTED FLYCATCHER and it's only one of a few that have been found in the US.  If you follow the ABA codes of ranking rarities... it's a Code 5, essentially the highest rarity ranking possible.  Lucky for us, a pair or two have been in Arizona in recent years and we caught up to one of them much to the delight of everyone present.

When one thinks of BROWN PELICANS, they often think of them soaring along the coast of an ocean or something.  This one, however, had found a sewage treatment pond near the small town of Amado.  I can't imagine there was a ton of food for it there... which might explain why it was sitting on the bank asleep: 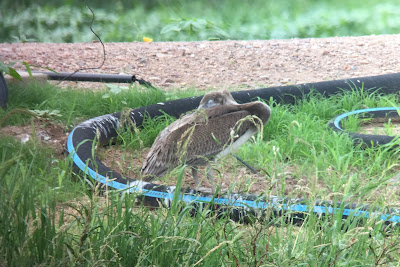 The forests of these southern Arizonan "Sky Islands" host so many other cool creatures too.  Here's a BEYER'S SCARAB, a huge species of beetle that is found in Mexico and southern Arizona: 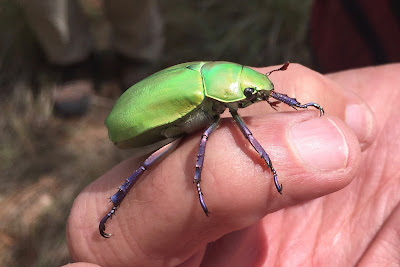 Not to creep anyone out or anything... but how cool is this view of the Skull Eyes caves in Cave Creek?  Pretty eerie, huh? 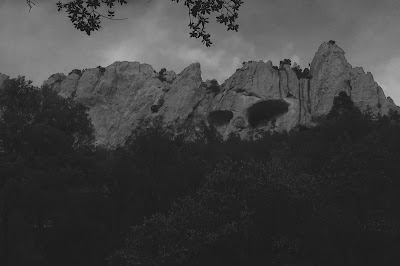 Anyway, it was a fun tour filled with awesome birds, nice scenery, and a fabulous show of the monsoons of Arizona!  Props go out to John, as always, for his expertise in the area.