Some mo' in MO

You know, I've been so preoccupied with photos from tours that I haven't put much time into sharing photos from home.  How about I fix that here and now.

It's kind of an interesting time around here in Missouri, to be honest.  Sure, spring migration IS a distant memory and most of the breeding species are quiet for much of the day.  However, it's in this month, June, that you can start to see the first "fall" migrants (usually shorebirds).  For example, here's a WILLET that Ashley found while we were out birding this morning at Mark Twain Lake (checklist): 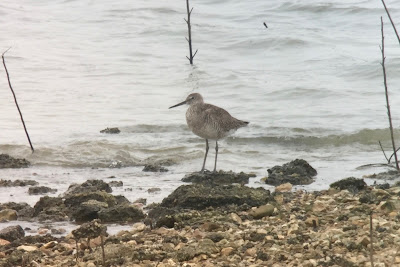 We were pretty happy with this sighting; it was our first ever for Missouri (and kind of an overdue need for us).

Speaking of Mark Twain Lake (a reservoir in northeast Missouri), there's been a COMMON MERGANSER there at the dam that never seems to migrate north like he should.  This is the second summer he's been around so I think he's probably permanently injured and can't migrate.  Here's a terrible photo of him perched on a distant shore: 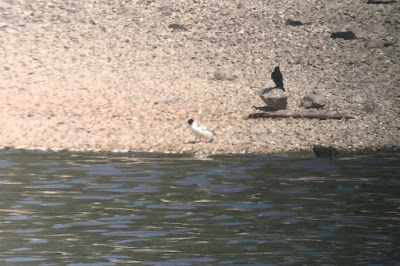 In this part of Missouri, we have tons of PURPLE MARTINS around.  Here's one that posed briefly in downtown Hannibal: 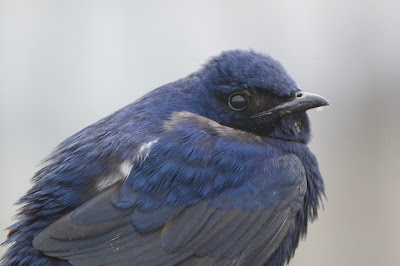 Another common species, the BLUE-GRAY GNATCATCHER, is found in many of the forested habitats around here.  In fact, we have them in the yard.  Here's one in April from one of the better forests near town (checklist): 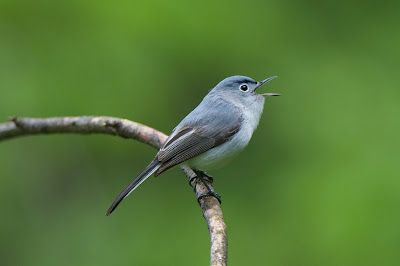 Although not as common as the above two species, BLUE GROSBEAKS are definitely around the scrubby habitats.  In fact, I heard one singing from the yard a few days ago.  Here's a female from earlier this summer: 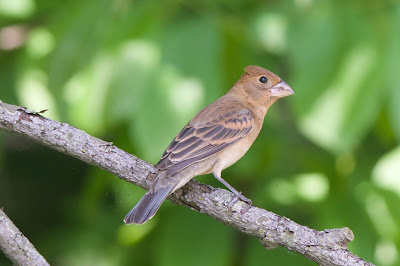 We feel fortunate to live in the company of NORTHERN BOBWHITES, a type of quail.  In fact, we sometimes hear them calling from the yard.  Here's one that Ashley photographed: 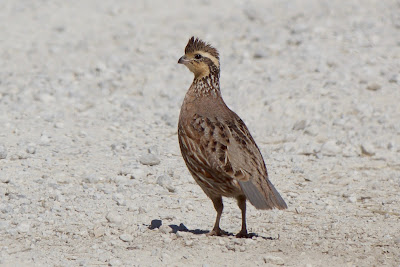 Of course, one of the bests sounds of summer come from the lonely gulping caws of the YELLOW-BILLED CUCKOO during the hot and humid afternoons.  Here's a pic of two of these slinky cuckoos (oddly enough, rather low and in more open habitat than usual... they were probably migrants): 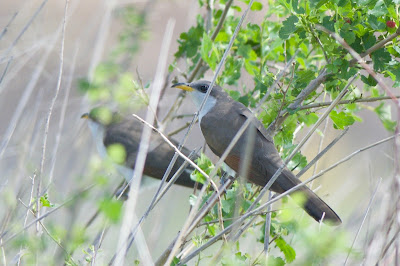 We have done a tiny bit of traveling within Missouri to target some easy state birds.  For example, here's our first WESTERN KINGBIRD; I guess the ones near Columbia are shy and won't show me their faces?  Lame. 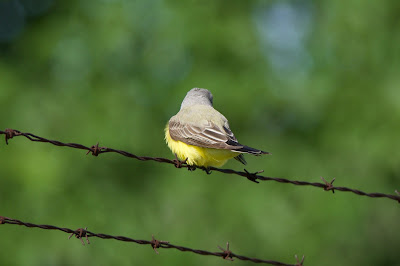 The pugnacious EASTERN KINGBIRDS though, they don't mind! 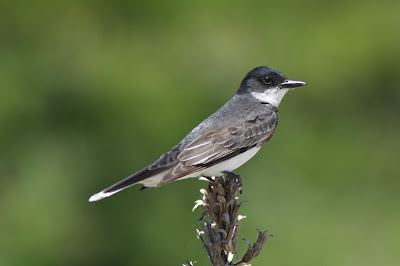 One of the main targets for our wander to the southern reaches of the state was for this bland but rare breeding warbler, the SWAINSON'S WARBLER.  It took some effort but we eventually heard and then saw one: 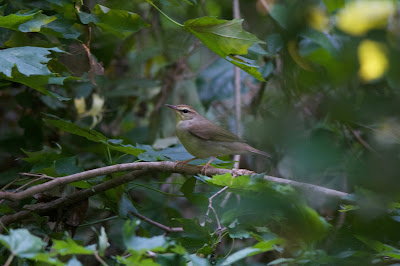 For reference, this was only the 4th time I had seen this species in my life.

While down there, we took some time to enjoy the many SCISSOR-TAILED FLYCATCHERS that ended up being abundant: 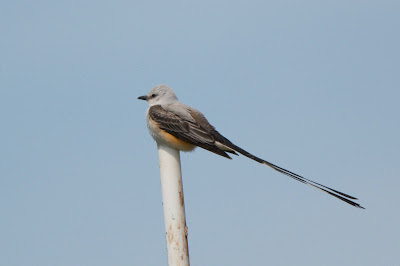 We even snagged a few other state birds like SWAINSON'S HAWK and this BLACK VULTURE: 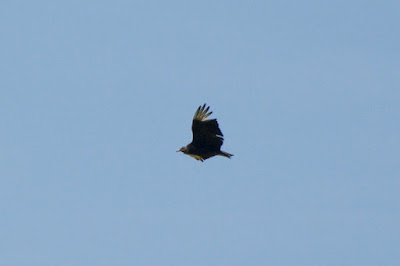 Back home in northeast Missouri... we've enjoyed the many HENSLOW'S SPARROWS around.  Here's a screen-capture of all the eBird records this June.  All of the pins you see, 10 different spots, are from Ashley and myself: 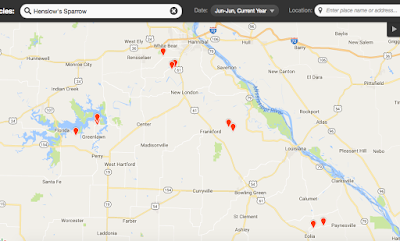 Although I haven't worked on photographing these uncommon sparrows lately, we really have enjoyed stopping at good-looking fields and, more often than not, finding them!

Missouri is the first place I've lived where MISSISSIPPI KITES are in the mix of breeding species.  Although we have yet to see one from the yard, they're findable over by the Mississippi River.  Here are a couple of shots of this aerial predator: 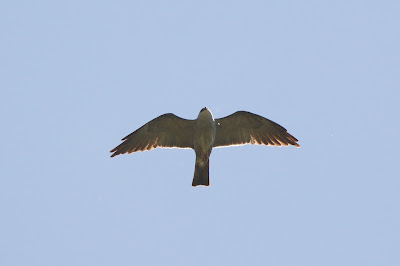 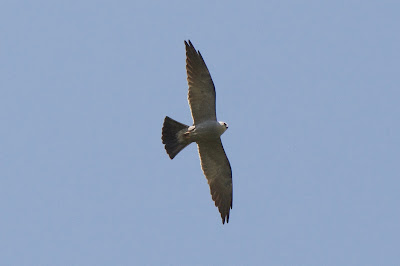 Although I was away on tour, that didn't stop Ashley from finding a LEAST BITTERN at Ted Shanks Conservation Area in Pike County.  Thankfully it was still around when I got back and we managed to sneak a look at it: 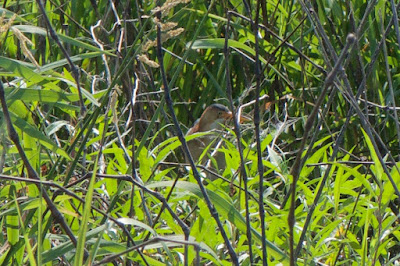 Better yet, we took notice when a pair of BLACK-BELLIED WHISTLING-DUCKS was reported between us and St. Louis.  Wow, that's a quality bird for this part of the Midwest!  We decided to chase them and, lucky for us, we found them right away sleeping up in a tree (as this species often does).  Here's an iPhone photo we took through the scope: 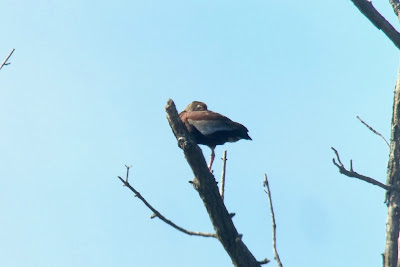 The warbler diversity around northeast Missouri isn't half bad during the summer.  For example, a species we bump into rather often (including on the property) is the PRAIRIE WARBLER: 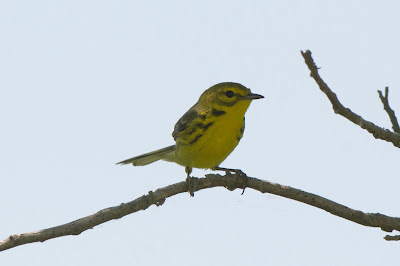 One of the more uncommon warblers around is the BLUE-WINGED WARBLER; here's one that may have attempted to breed here on the property (I haven't actually heard him in a while): 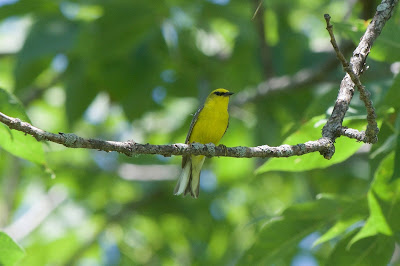 Thankfully, the YELLOW-BREASTED CHATS are common and vocal as ever.  Here's one in the yard: 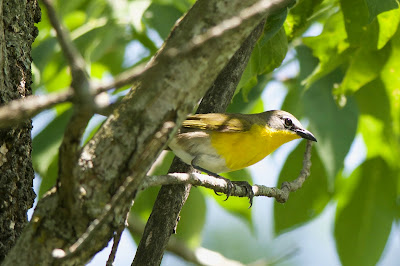 It's a close call, deciding which we hear more often from the yard: chats or KENTUCKY WARBLERS.  I think the latter wins; we hear this species every single day even from our bedroom window (actually, I'm listening to one as I type this).  Here's one of the territorial males we have: 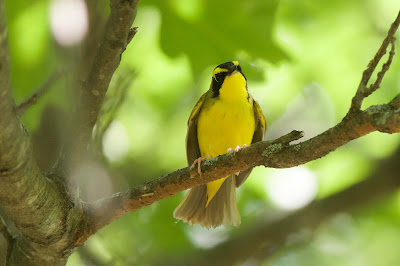 Although we have Kentuckys around, we don't ever seem to have nesting OVENBIRDS on the property.  No matter, we can find this streaked warbler in other nearby forests: 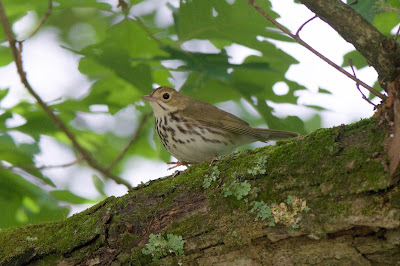 One of the highlights of the summer season for me are the thunderstorms.  Why?  Well, take a look!  Here's a photo from the yard one evening!  What a gorgeous sky. 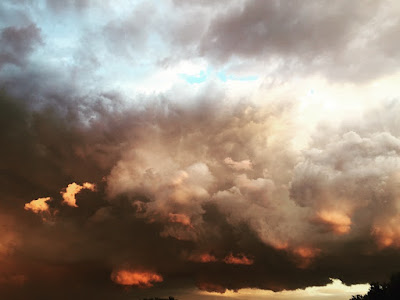 I haven't had the opportunity to spend much time with butterflies these days but did enjoy an encounter with this BANDED HAIRSTREAK here on the property.  A nice-looking butterfly and not one I see often: 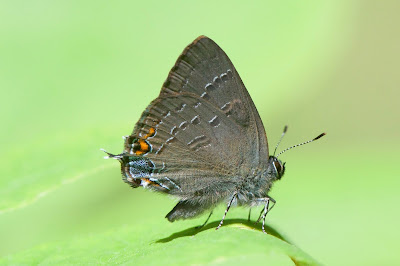 Anyway, that's all for now.  My next post will probably be highlighting our Field Guides tour to Newfoundland and Nova Scotia.  Until then, get outside!
Posted by Cory J. Gregory at 6/29/2017 06:54:00 PM