Even if you were living under a rock... you would have noticed something weird going on.

Of course you've probably heard about the total solar eclipse that happened yesterday, August 21 across much of the US.  Ashley and I were lucky to be home in Missouri because the "zone of totality" sliced right through the state.  If we drove south a little ways, not only could we see some of the eclipse, we'd have one of the best seats in the country for it.

We ventured south... then west towards Columbia but then the doppler showed THIS: 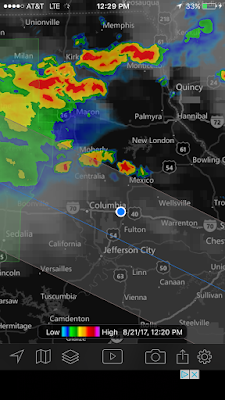 Hmm, that weather to the west did NOT look conducive to skywatching!  We turned tail and fled back to the east on I-70 for a ways before heading south towards the town of Fulton.  In the above map you can also see the zone of totality with the blue line running through the center of it.  We ended up extremely close to that blue line which ensured some of the longest views of the total eclipse.

We pulled off, had a rural road (complete with corn fields) completely to ourselves.  Before long, we noticed the light getting more and more eerie.  It wasn't like the sun was setting... it was more as if a giant spaceship had flown in overhead like in Independence Day or something.

We looked up during the totality phase and literally gasped.  It was gorgeous: 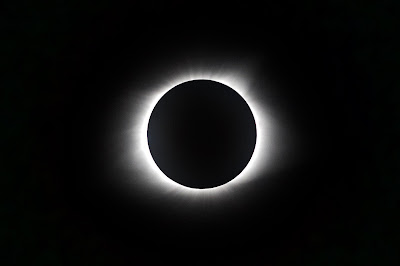 We also made an eBird checklist during the eclipse but it didn't have much on it to begin with.  We did notice that during the couple minutes of totality that things got REALLY quiet.  Somewhere distantly a Northern Cardinal chipped.  The crickets were going.  Eerie stuff.
Posted by Cory J. Gregory at 8/22/2017 09:59:00 AM