Did you know that Field Guides has a tour to Maine???  Yep!  Lucky for me, I recently joined Eric Hynes and we ran this popular tour together.  Being my first Field Guides tour to the area, I was eager to see what the northeast had in store.

We used Portland as our hub and man, it's nice working with a small airport like that!  After we all arrived and got settled in, we set out for a couple of days of birding there in southern Maine.  It was really fun getting species like UPLAND SANDPIPER, BLUE-WINGED WARBLER, and PRAIRIE WARBLER in the plains, not to mention many more coastal species near the Atlantic.  We visited several spots along the coast netting us species like the dainty LEAST TERN: 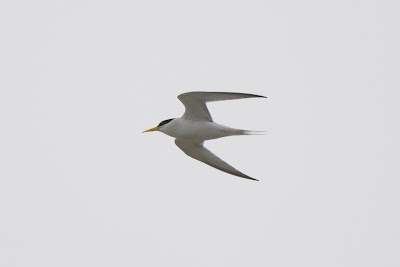 As is often the case... where there are Least Terns, there are PIPING PLOVERS.  Well, it was true in this case, at least; we had beautiful looks at this pale plover species: 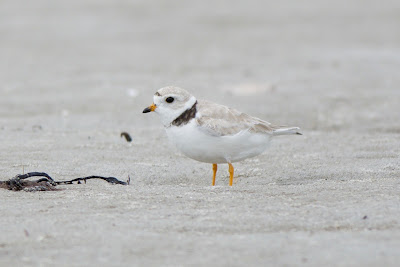 It was along the coast that we found a nice flock of sandpipers swirling around a beach, feeding feverishly on the sand before taking flight again and again.  But what species were involved?  We got to work sorting through things.  Mixed in with the 100+ SEMIPALMATED SANDPIPERS were a couple of WHITE-RUMPED SANDPIPERS.  Here you can see the latter on the left: 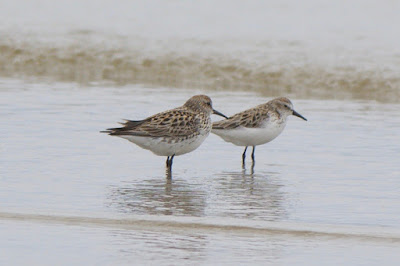 Note the larger size and streaking down the flanks of the White-rumped.

When the flock took flight, it was fun trying to sort them out on the go.  Here's a photo showing the two species side-by-side: 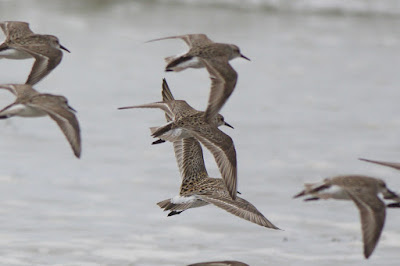 The WHITE-RUMPED is the bottom bird; note the white that wraps around the entire rump.  Compare that to the SEMIPALMATEDS above it which show the dark streak through the rump.

Anyway, we eventually headed for more forested regions in the Portland area.  Below is a singing GRAY CATBIRD, a member of the Mimidae family (along with thrashers and mockingbirds): 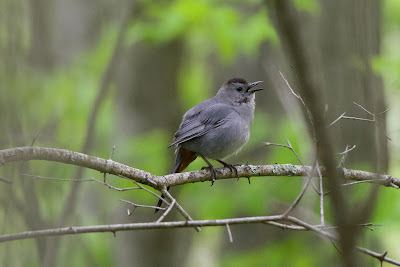 The sunset capping our first full day of birding was especially nice: 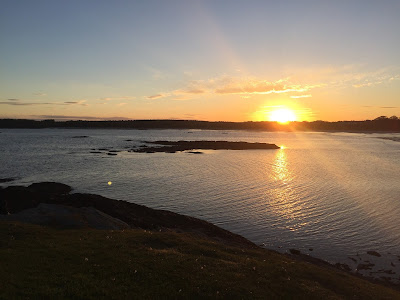 We then headed north and spent some time birding on Mount Desert Island (where Acadia National Park is).  Here's a panorama from the scenic Southwest Harbor area:

Of course, the highlight for many was the boat trip out of Bar Harbor to see seabirds, whales, etc.  The whale-watching company took the boat out to the island of Petit Manan which is part of the Petit Manan National Wildlife Refuge.  The small island, seen below, has a lighthouse, a small crew of bird researchers, and a whole lot of birds: 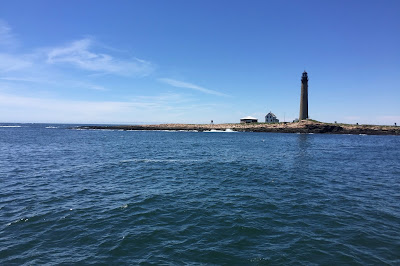 The main target here was, of course, the ATLANTIC PUFFIN.  Here's one flying by the boat: 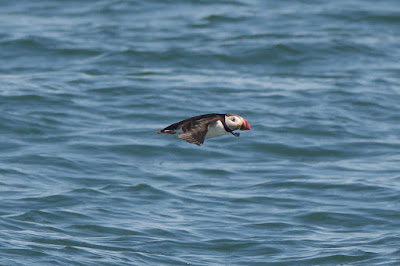 Besides the nesting puffins, there was a selection of ARCTIC TERNS, COMMON TERNS, and RAZORBILLS.  Here's the latter, a chunky black-and-white alcid: 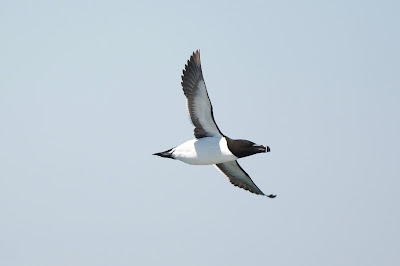 After quite a bit of looking, yes, our trip found whales!  Two HUMPBACK WHALES gave us quite the show.  In fact, it was a known female with her calf (photos can help ID the animal down to the specific individual).  Here's a shot with both in view: note the small dorsal fins: 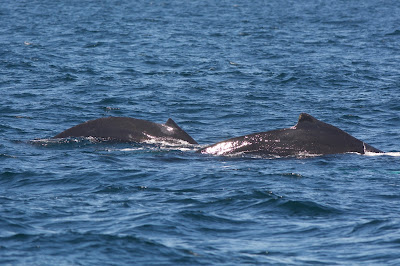 As was typical for our time along the coast, we saw lots of COMMON EIDERS as well.  Eiders are very hardy, northern sea ducks.  Here's a male in flight with the distinctive black belly: 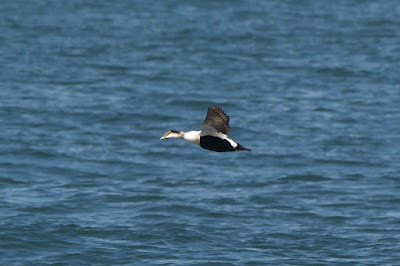 I'm not sure everyone got on them (meaning... got their binoculars focused on them), but there were some NORTHERN FULMARS out at sea as well.  Here's one in flight: 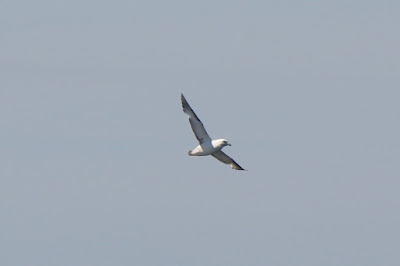 The fulmar is related to shearwaters and albatrosses in that they have the distinctive tubed nose.  No, you can't really see that from this distance!

We chanced into a couple of NORTHERN GANNETS on the wing during our boat ride as well.  The distinctive black-and-white patterning was evident even from a distance: 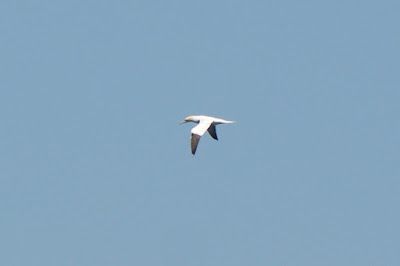 We also saw a number of loons winging it as well.  Here's a RED-THROATED LOON with its short legs and small bill: 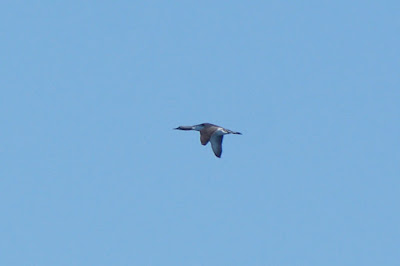 While we were motoring back into shore, I snapped a picture of the distinctive lighthouse on Egg Rock (originally built more than 130 years ago): 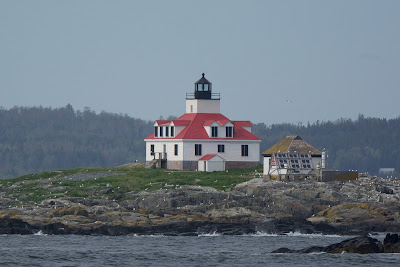 And just before reaching the dock this BLACK GUILLEMOT popped up.  Note the striking black-and-white plumage with bright red legs: 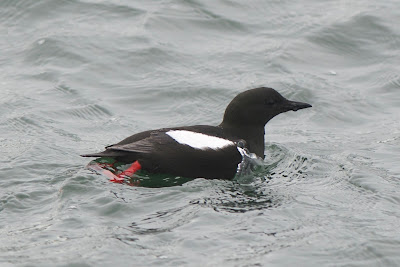 Our tour eventually headed inland to bird different parts of Maine including the more northerly bogs. These northern bogs were really cool too, full of YELLOW-BELLIED FLYCATCHERS, MAGNOLIA WARBLERS, a few skeeters, and some really nice photo opportunities:

Some of these "sprucey" areas hosted boreal specialties like GRAY JAY and BOREAL CHICKADEE.  Here's the latter that we were able to coax into view: 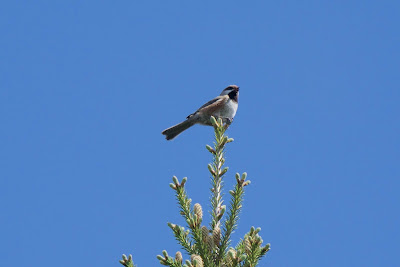 Not widespread but still a target, we tracked down just a few PALM WARBLERS on territory: 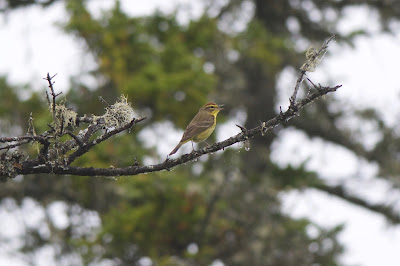 The vistas, like this one in Rangeley, albeit cloudy, were still nice: 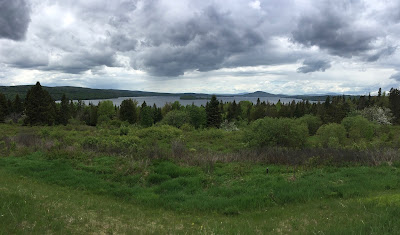 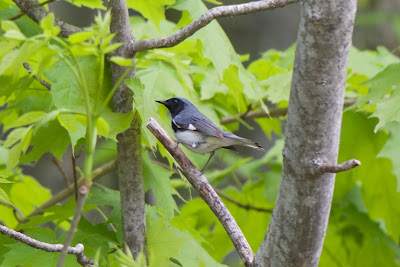 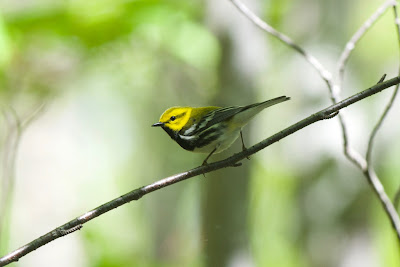 This PILEATED WOODPECKER was impressive as ever as it flew over.  Sometimes it's easy to forget that we have crow-sized woodpeckers! 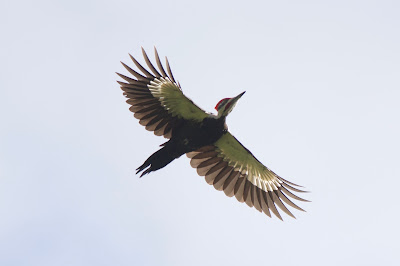 Although it's the "Maine" tour, we do actually dip into a different state for a night:  New Hampshire.  The reason is simple; we visit the high slopes of Mount Washington hoping for the uncommon and local BICKNELL'S THRUSH.  Although the weather was very dicy this year (they were reporting snow, sleet, rain, and wind topping 40 mph)... we braved the elements and ventured up one evening after all the other visitors had left.  Although the wind was howling, we found a sheltered spot to give it a try.  Much to our delight, a BICKNELL'S THRUSH zoomed in!  We couldn't believe our luck... what a relief considering the weather!  Our group was all thumbs-up: 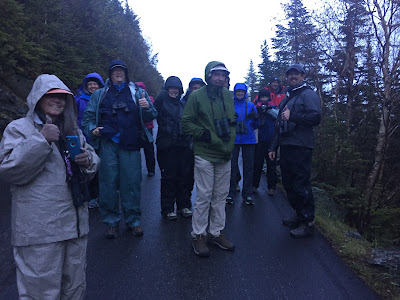 However, making things even more goofy... we would end up finding ANOTHER Bicknell's Thrush farther up the mountain.  This time, the bird even came out and foraged low along the shoulder of the road!  Crazy. 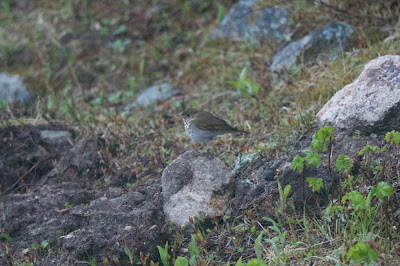 Anyway, after the high wore off we realized that by this point the tour was wrapping up.  We found our way back into Maine and thankfully a few of our remaining targets fell into place nicely.  Among others, we snagged WILLOW FLYCATCHER, WILSON'S SNIPE, and this YELLOW-THROATED VIREO: 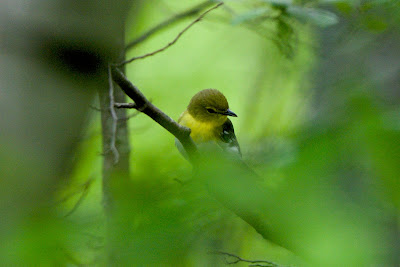 Although this species breeds in my yard in Missouri... they're fairly local in Maine and so we were happy to add it to the triplist.

After it was all said and done, it was a successful trip with a great bunch of folks.  We nearly reached 180 species for the trip which is nothing to sneeze at!  I'll leave you with a photo of our group, probably a bit sad to be leaving the wonderful birds of Maine: 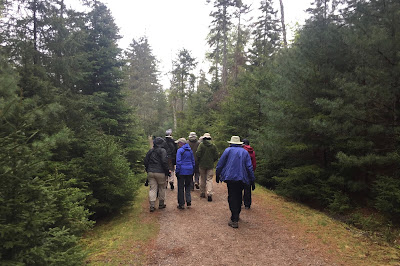