"Birds of New Guinea: Distribution, Taxonomy, and Systematics" by Bruce M. Beehler and Thane K. Pratt was published in 2016 by Princeton University Press. It's a 668 page hardcover that runs $75.00. You can find it online here.

In some sort of nasty shade of irony, this book review will actually be shorter than my others... even though the amount of material hiding between the covers of this tome surpasses almost any others on my shelf. Why? Well, we'll get to that shortly. Let's start with a brief run down of its physical attributes.

Many of you have a good grasp on the size of the Sibley. Here's the book side-by-side with it: 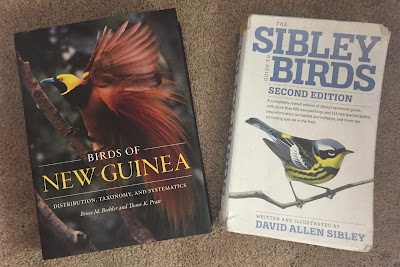 Chunky book, yeah? Here it is in terms of thickness (the worn Sib on top): 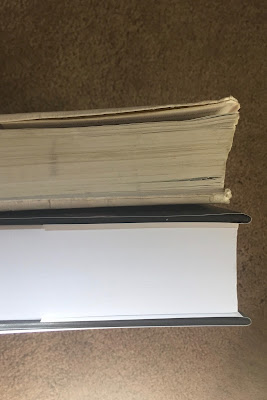 Yep, thicker than Sib (not that size is a detractor in this case).

You take the sleeve off and its naked self is far less exciting. Go figure: 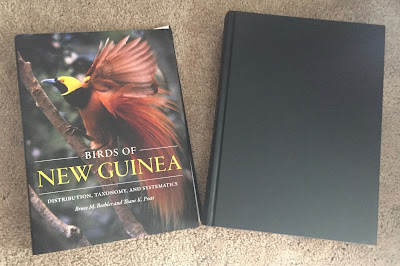 So why does size not make a difference? Right off the bat when you flip through this book you realize that this book has NOTHING to do with being a field guide. No, this is 100% a reference guide. So breath easy, you won't be hauling this into the field!

Inside the front and back cover... a map greets you: 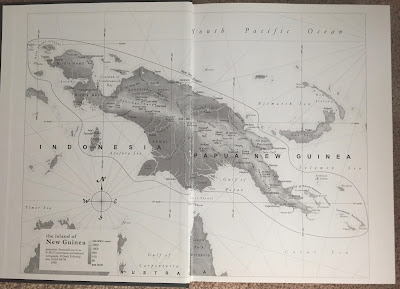 Flip a couple of pages in and you find yourself face-to-face with the contents. Things are ordered taxonomically: 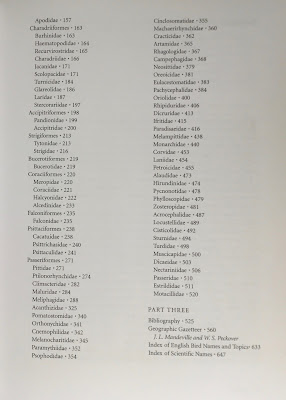 So you'll see the order Strigiformes starts on page 213. Indented below that are the different families within the order. Pretty simple (assuming you know some of the names!).

Let's take a look at this sample page: 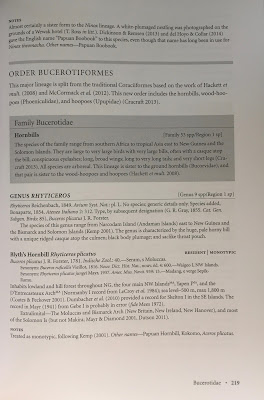 What do you see? It has a brief intro for the Order Bucerotiformes where it mentions how this lineage was split from traditional works based on several papers. Below that is a shaded area where it mentions a bit about the Family Bucerotidae (Hornbills). It shows that there are 53 species in this family and only 1 species in the region (New Guinea). It goes on to give a very brief description of hornbills. For example... "They are large to very large birds with very large bills, often with a casque atop the bill; conspicuous eyelashes; long, broad wings; long to very long tails; and very short legs (Cracraft 2013)."

Below that, it mentions the genus. In this case, genus Rhyticeros. Again, it shows that there are 9 species in this genus worldwide but only 1 species in the region. It continues with a tightly-packed paragraph of references, papers, who named the genus, what year the genus was named, mention of the type specimen, etc. There's a lot of research that goes into that tightly packed section!

Then comes the actual species account for the Blyth's Hornbill Rhyticeros plicatus. It mentions it being "resident" which basically means non-migratory. Next to that it says "monotypic" meaning, in this example, that it's the only species in that genus.

The information continues with what it was named originally and by whom, the date that happened, and where it was published. Next it briefly mentions distribution: "Inhabits lowland and hill forest throughout NG, the four main NW Islands, Yapen I, and the D'Entrecasteaux Arch." It continues for another couple of sentences including mention of any extralimital reports followed by a brief notes section.

So that, essentially, is what is covered in each species account. Here's another sample: 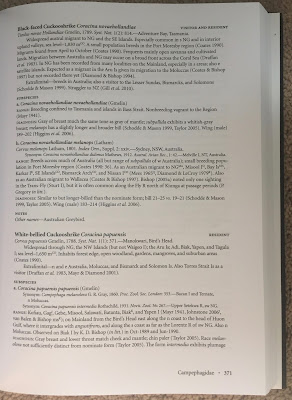 The above page covered a bit regarding a couple of species of cuckooshrikes including the Black-faced Cuckooshrike. The header shows how it's a "visitor and resident" meaning some migrate out of New Guinea during the nonbreeding season, some stay. Then it shows what it was originally called... "Turdus novae" by Gmelin in 1789. This species has 2 subspecies which, as you can see above, the authors delve into thoroughly.

Here's another sample page. At the top is the "Jacky Winter"... a species I just saw last fall in Australia. I'll leave it to you if you wanted to peruse through another species account: 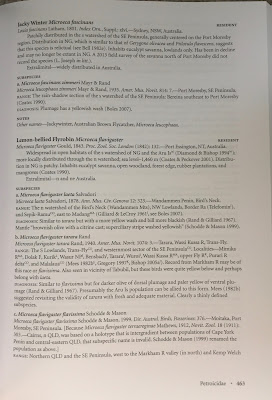 After the 480+ pages of species accounts you come to Part III. First up is a 34-page bibliography followed by a gazetteer. This 72-page tome, created by Jennifer L. Manderville and Williams S. Peckover, is a simple (but hefty!) spreadsheet of locations. For each entry, you'll find its name, lat & long of location, elevation, bird region, and alternative names, researchers, and references: 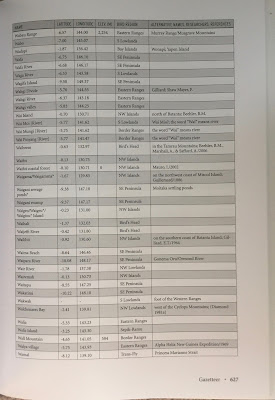 Therefore, if you're in need of the lat and long of Mount Sigul Mugal in the SE Peninsula region, you'll know where to go. Except I'd avoid that area because it sounds like something from the wrong part of Middle Earth, probably just east of Mordor, over the bypass. Real estate is much more affordable there but unemployment is high (probably due to the high rate of orc-related deaths). Moving on...

So in the end, this book is... just...wow. If you're looking for reference material for the bird species of New Guinea, look no further! New Guinea is no joke either, there have been nearly 800 species of birds recorded there and more than 350 of them are found no where else on earth. This collection of data, the first since Earnst Mayr's checklist was published 1941, is downright impressive. Pick up a copy and see for yourself!


Disclaimer:
I received a complementary copy from the publisher for review purposes, but the viewpoint expressed in this article is entirely my own.
Posted by Cory J. Gregory at 6/27/2017 07:17:00 PM