When I was recently in northern Arizona, I had to make a judgement call; do I delay my flights back home (substantial $$ to do so) so that I could chase some rarities in southern Arizona?

Well, yes, you knew the answer would be yes!

I had my sights on 3 particular rarities... Pine Flycatcher, Slate-throated Redstart, and Tufted Flycatcher.  All of those would be ABA lifers for me and since, yes, I play the game of ABA listing a little, I figured it was well worth the time/money.

Thanks to the willingness of John Coons to drive his 4x4 and Chris Benesh to navigate, we three ventured up to Aliso Spring to look for this first-ever ABA record.  In short, Pine Flycatcher has been on the list of potential first records that might show up... and sure enough, this year it happened (actually found and identified by the pros at Field Guides).  Furthermore, this bird is apparently nesting!  Well, she's been on a nest but it's anyone's guess who she mated with.  When we arrived, this was the scene, a broader look at the rustic campground area known as Aliso Spring: 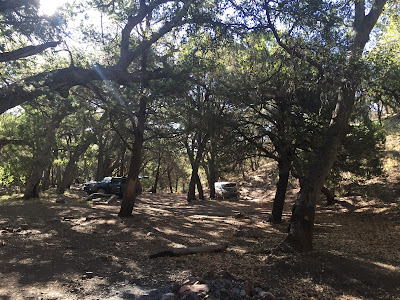 As for the flycatcher, all we could see was the underside of her bill as she incubated: 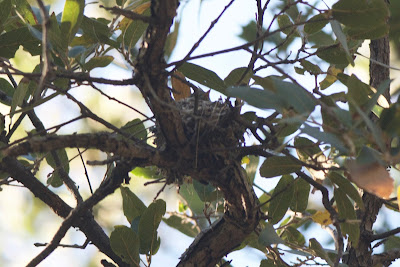 ... but that didn't stop me from looking at it! 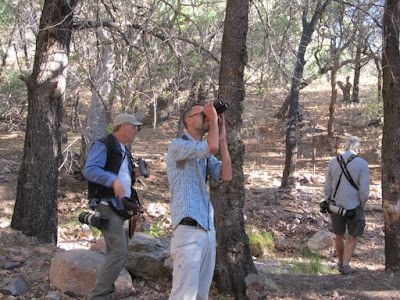 Fine, we'd play the waiting game.  I went off and photographed some other things instead like this awesome butterfly known as a Nabokov's Satyr: 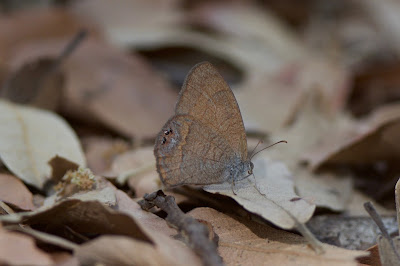 I'm not positive but I'm pretty sure this was a new species for me.  And besides, I really enjoy the satyrs with that gemmed look to the hindwing below.

Aliso Spring also had a couple of SULPHUR-BELLIED FLYCATCHERS out and about and they're always a fun bird to have on the side! 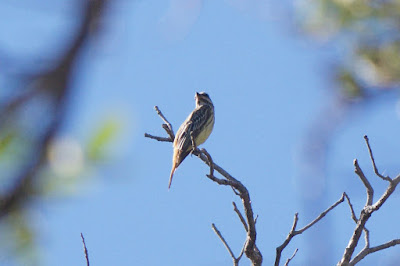 And sure, why not, here's a damselfly that I haven't looked up yet.  Still, pretty cool looking dude: 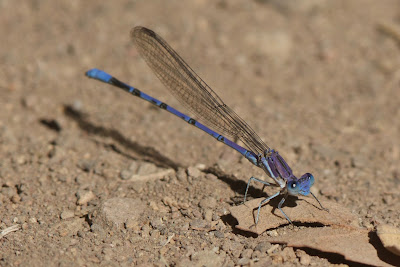 Finally, the PINE FLYCATCHER went on a foraging break and we got to see her away from the nest: 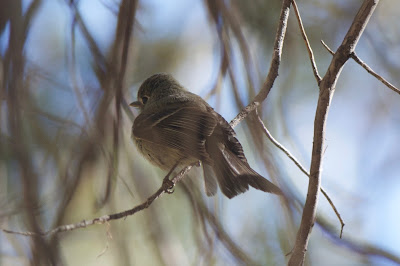 However, as you can see in this blurry photo, there was a local DUSKY-CAPPED FLYCATCHER that wasn't a fan and we watched it attack her at least once! 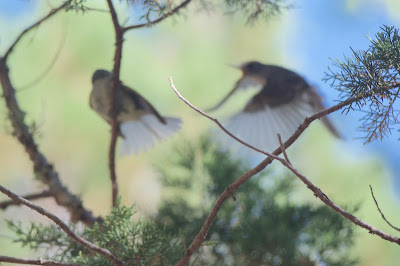 Poor girl.  She was fine though and she instantly resumed normal activity: 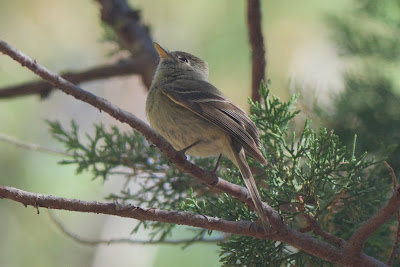 In the end, we all got great looks as it foraged around us: 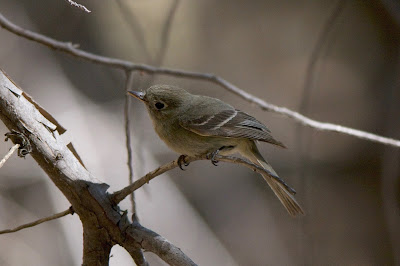 Its was pretty vocal too and that's key given that the call note is one of the big factors in determining this was a Pine instead of a more normal species.  Here's a last parting shot of this rarity: 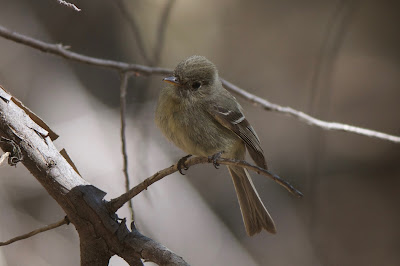 On our way out, the three of us birded another area or two down the road seeing more things like the bright red belly of this PAINTED REDSTART: 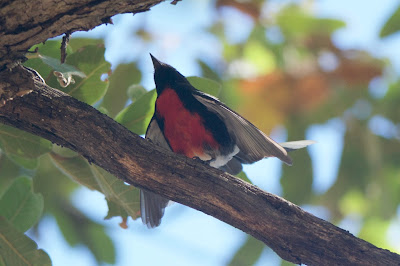 It's a bit ratty but there were plenty of BRIDLED TITMICE around too: 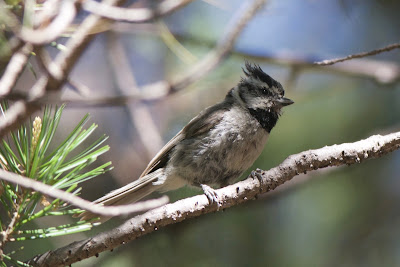 The next day brought a new target.  Chris and his son joined me (actually, the other way around!) and we ventured up to Pinery Canyon in the Chiricahuas to chase another long-staying rarity.  When we arrived, there wasn't much waiting to be done; the bird was super active as it ventured out for food, returned to its nest to feed young, and ventured off for food again: 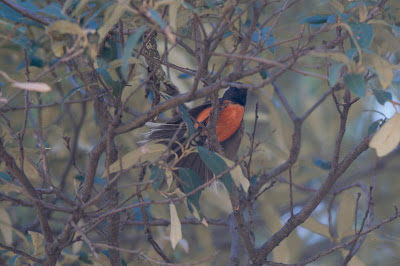 Sometimes it would forage fairly high up, like this: 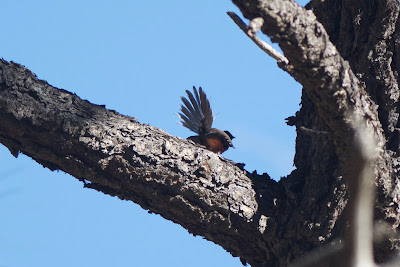 This photo was almost sharp... and I almost had the whole bird in frame.  Oh well! 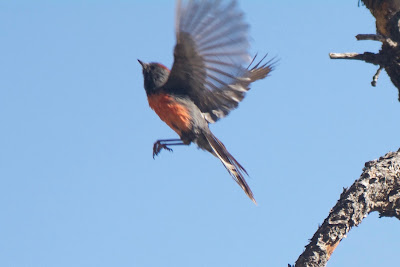 The one time it popped out cleanly in the open, I was shooting at too slow of a shutter speed: 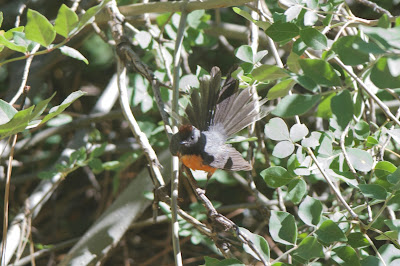 There were other things around too, of course.  The buzzing of BROAD-TAILED HUMMINGBIRDS was commonplace.  Here's one perched where I wanted the redstart to perch!  :-) 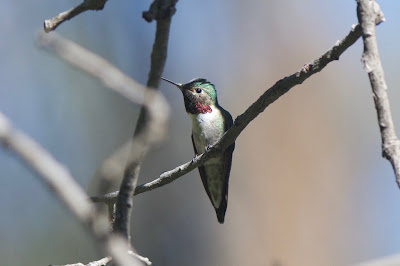 But in the end, I was super happy.  After all, I was 2 for 2 on these chased lifers!  Now the question was all about the next day....

I was on my own for this adventure.  I had stayed in Sierra Vista and was at Ramsey Canyon right at 8:00 AM when they opened their gates.  The hike up for this rarity is nothing to sneeze at; although it's only a couple of miles up... it is UP.  But hey, I took my time, enjoyed some birds on the way up, and before I knew it, I was getting close to where the Tufted Flycatchers (yes, two!) have been hanging out.

Thankfully, I found both birds without trouble (although I had initially passed the cairn that was marking the spot).  I didn't approach the birds at all, I was content to watch from the trail.  Here's some proof that I got to see these warm-colored and distinctive tropical flycatchers: 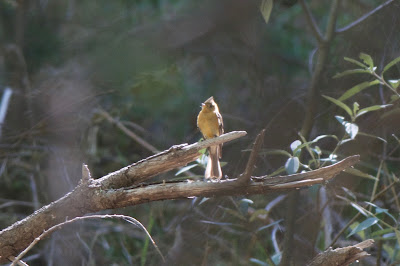 The pair was quite active; I'm not sure if they might have been feeding young in the nest or not.  They were certainly vocal though giving their rough double-notes.  Such a neat species to have nesting in the US! 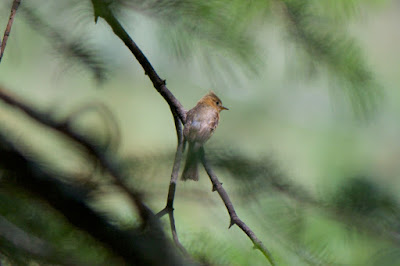 After soaking up another successful twitch, I eventually meandered back down the canyon towards my car that I was sure was cooking in the heat.

Not being in any hurry though to cook myself inside it, I stopped along the way back down to admire some butterflies.  First up is a super cool species called an Orange-edged Roadside-Skipper: 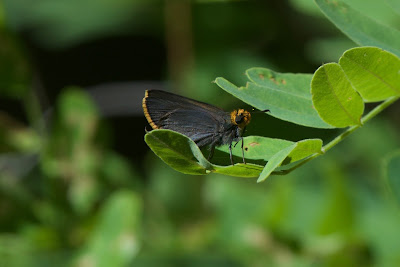 This species is actually quite limited here in the US, found in only 2 counties north of the border.  Although I had seen them once before in the Chiricahuas, I was happy to study them some more.

The most common species of butterfly that day though was the ARIZONA SISTER, a bold and attractive species: 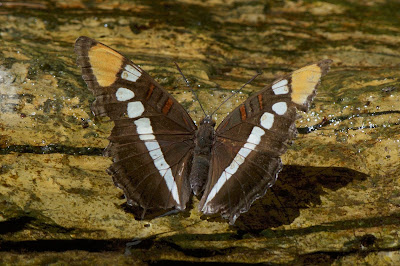 But yes, I eventually made it out of the canyon (and into my cooking car).  Sweaty but pleased, I went 3 for 3 on my chases; definitely a quality side-trip!

So some final thoughts?  Besides Arizona hosting a wealth of exciting rarities right now...  I've concluded that dust devils in Arizona deserve some respect! 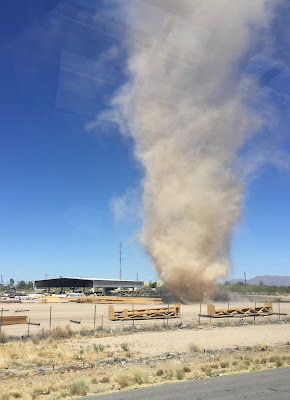 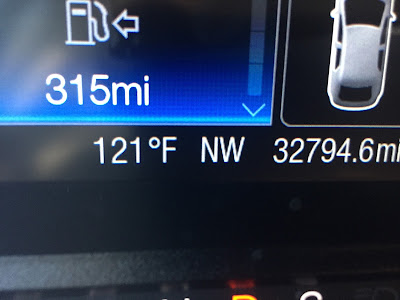 In fact, I saw bunches of cars sidelined on the interstates by blown tires.  Being in a rental car, I was concerned that I might be next... but I survived.  And then I survived the flight back to Missouri.  Now, I'm back in the land of singing Yellow-breasted Chats, Prairie Warblers, and White-eyed Vireos.