Oy!  I'm still in Missouri but there should be a big, fat asterisk with a footnote saying I'm only going to be the Lower 48 for another 2 days.  Then... five months in Alaska.

But first, I really have been having a blast being in this part of the country at this time of year.  I can't decide which I've enjoyed more... having some migrants around or being able to sit and watch thunderstorms roll through (as one is doing right now).  Either way, here are some pictures from the past week or so.

We have done just a little bit of exploring locally but some of the spots we've birded have been productive.  For example, there is a wooded area north of Hannibal called Steyermark Woods and because it was a hotspot in eBird, we decided to take a look around one morning.  The forest was lush and the birds were noisy; it was a good time.  Here's a Jack-in-the-Pulpit: 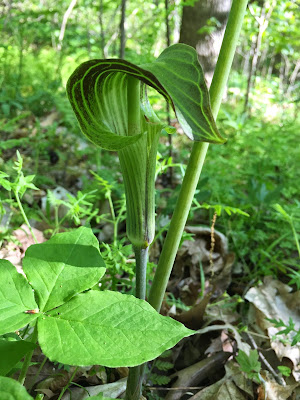 You can see our checklist here.  You'll notice some fun warblers like the many WORM-EATING (they were busy counter-singing each other) and a whole slew of KENTUCKY WARBLERS.

We also ventured up into Iowa for a day or two to visit family.  If you know where to look, like my sister did, there are some very stunning, bluebell-filled woods near Waterloo:

On our drive south back towards Missouri, we stopped at a few spots in SE Iowa to revisit some former haunts of ours.  Click the name for the checklist:

Lacey-Keosaqua State Park.  We actually camped here one night (and enjoyed some crazy strong thunderstorms in the process) and awoke to some fun birding.  We ended with 70+ species, 15 species of warblers (including at least 6 KENTUCKYS, 1 WORM-EATING, 4 GOLDEN-WINGED), and even a BLACK-BILLED CUCKOO that was singing in the middle of the night after the storms passed.

Shimek State Forest -- Donnellson Unit.  Highlights here included another BLACK-BILLED CUCKOO and 11 species of warblers including HOODED, BLUE-WINGED, and GOLDEN-WINGED.  The Chorus Frogs were fun too: 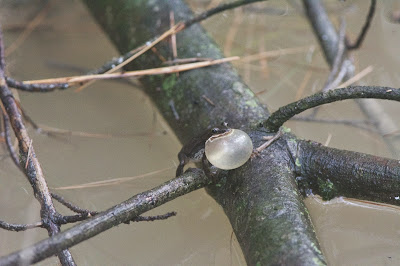 Shimek State Forest -- Croton Unit.  This is usually a reliable spot for some neat SE Iowa birds and it didn't disappoint on this visit either (despite it being after noon).  We had things like YELLOW-BREASTED CHAT, WHITE-EYED VIREO, WORM-EATING WARBLER, and a couple of KENTUCKY WARBLERS.  Here's one of the latter that perched up: 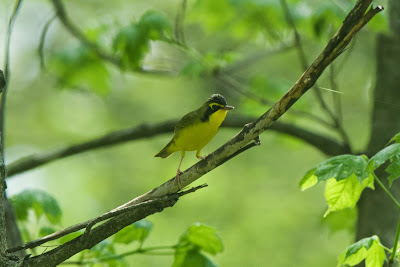 The land where Ash's family lives has been alive with all sorts of birds.  Highlights from the last couple of days include about 15 species of warblers, both GRAY-CHEEKED and SWAINSON'S THRUSHES, and even several BLACK-BILLED CUCKOOS that seem to be setting up camp.  In fact, this cuckoo photo I took caught someone's attention on Flickr: 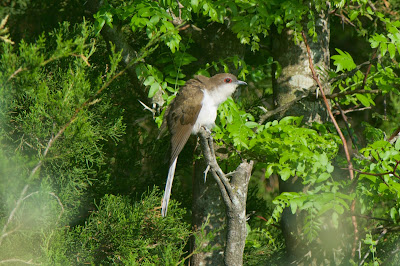 Most of my photos get maybe a hundred views (and that's if I'm lucky) but someone apparently thought this was worthy of being added to some Flickr group and because of that, it's already amassed 6000+ views.  Ha!  What a joke.  Wickedly cool species though, I'd have a hard time denying that.

We also went birding in St. Louis.  More specifically, there was this field that was supposed to host a reliable flock of cardinals.  We spent several hours observing and, indeed, they were there: 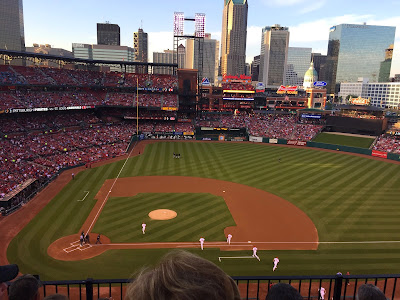 .... and because I'm a nerd who never stops looking for real birds, I made an eBird checklist for our time there, seen here.

I know I mentioned my county map in a previous post.  I added ~40 new counties on the CA --> MO drive which was a fun chunk of county listing.  I also visited 5 new counties in Iowa on my recent drive through.  Here's the up-to-date May version (not that anyone finds this that interesting!):