I haven't done a lot of birding in the last week or so.  With a couple of main projects at work coming to a close, I've been in the field a lot less lately as well.  Regardless, I have tried to collect some pictures from the last 10 days or so.
Remember the small urban lake near where I live?  I checked it a couple of more times.  You can see below that most of the birds I've been seeing are CANVASBACKS and RUDDY DUCKS: 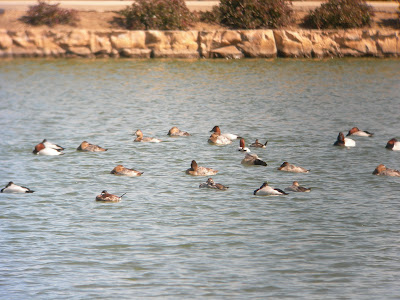 There are always a couple of COMMON GOLDENEYES present as well.  Here is a digiscoped male: 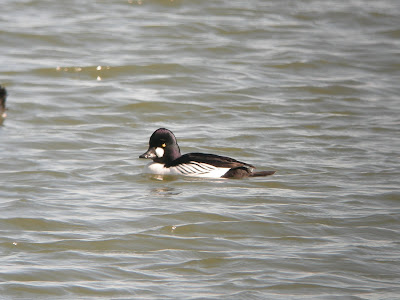 One of my checks yielded the female BARROW'S GOLDENEYE again: 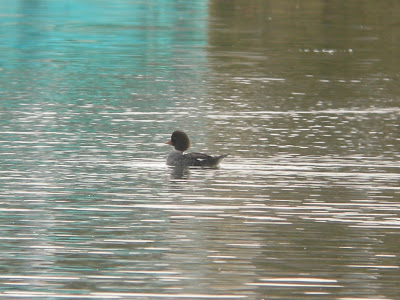 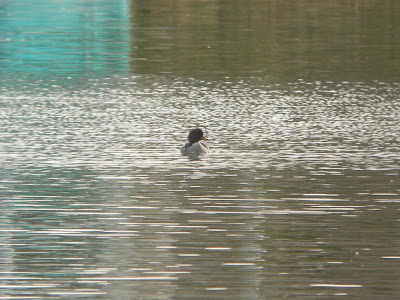 The few times I've been out in the field lately have been out to Staten Island where I conduct surveys every week.  As the farmers in the area prepare for the planting season, they're draining the fields that have been flooded all winter and bulldozing down the earthen levees that held that water in place: 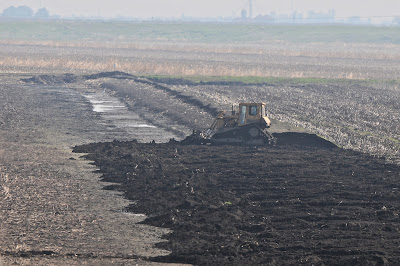 As the fields drain, it creates a lot of food-rich habitat: 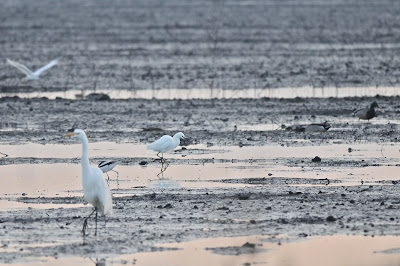 Here is an AMERICAN AVOCET taking advantage of one of the draining fields: 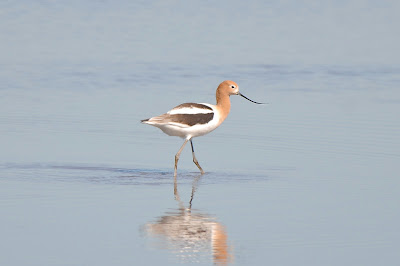 And these SNOWY EGRETS seem pretty content just chilling there in the mud too: 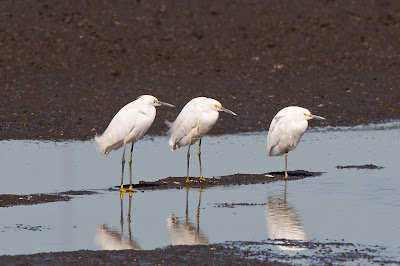 There were about 50 GREATER YELLOWLEGS in one of the fields yesterday.  Here's one: 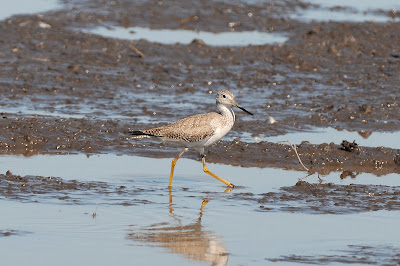 All the commotion attracts a lot of gulls too.  I've seen 5 species of gulls on Staten Island this winter including a couple of MEW GULLS, one here on the far left: 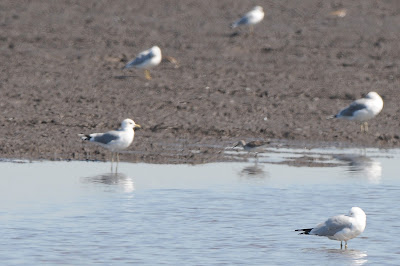 With the recent draining of water, most of the TUNDRA SWANS have already departed.  I only saw 5 yesterday and they were all together in one of the last remaining flooded fields.  Remember, I used to see thousands of swans in a single day here: 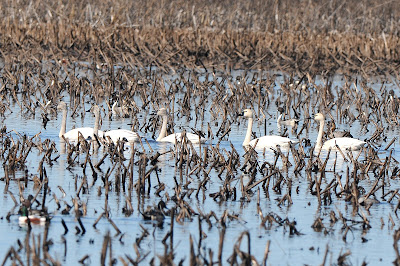 On the other side of the spectrum, NORTHERN PINTAILS are a huge presence right now.  I'm not sure how many thousands there were in this field.  Can you see any other species of ducks? (Answer will be at the end of the post) 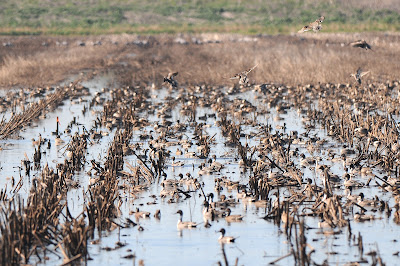 I've continued my quest to get more photos of the Central Valley race of HORNED LARK: 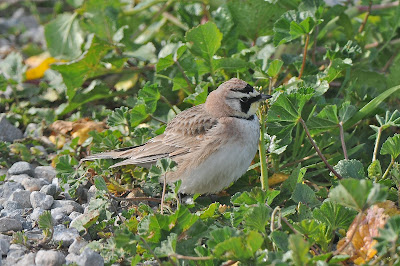 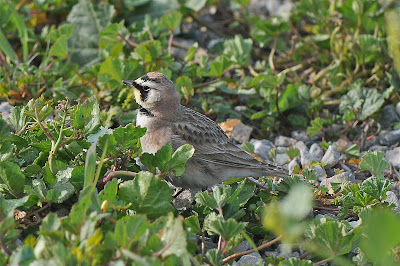 Birding from the levees surrounding Staten Island is always a bit of an adventure.  Who knows what weird thing you'll see.  Earlier this winter I even saw a CALIFORNIA SEA LION from one of the levees.  Much more regular though are NORTHERN RIVER OTTERS.  This one was snorting loudly at me... so I snorted back.  It was not impressed: 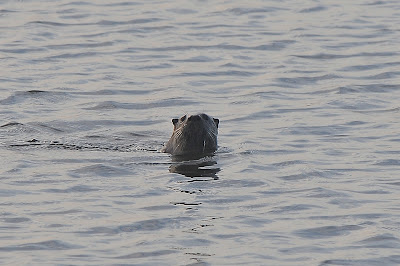 I also have great luck in stirring up AMERICAN MINKS out there.  There must be a healthy population in the area or something.  Here is an inquisitive one from the other day: 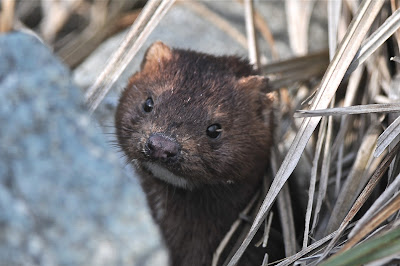 What I HADN'T seen out at Staten Island before were two AMERICAN MINKS chasing each other.  Weird. 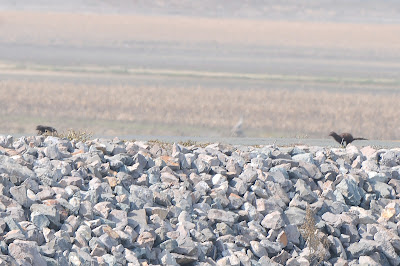 Also from the levee is this quiz bird preening on a rock.  Any ideas (answer at the end of the post)? 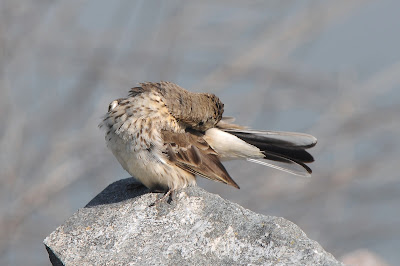 We've noticed a big drop in numbers of waterfowl on Staten Island.  As many of the birds start leaving the Central Valley and heading north, I have to remember to appreciate all the SANDHILL CRANES before they leave.  Here are three: 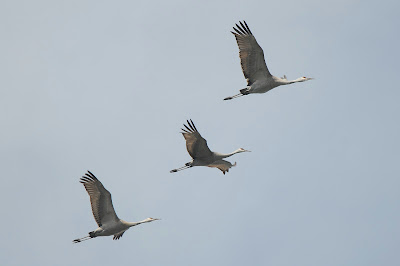 This most recent visit to Staten definitely felt like spring with temps in the 70s.  Here is another sign that it was really warm out: 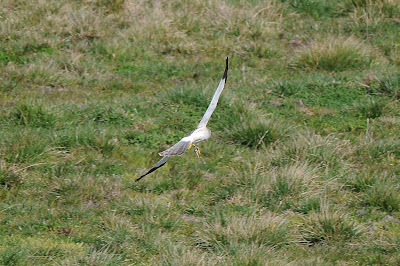 What exactly?  Well, you'll notice that this male NORTHERN HARRIER has caught a lizard of some kind.  It was my first day seeing lizards around again.  It's warming up indeed.

This DOUBLE-CRESTED CORMORANT was actually showing off those double crests: 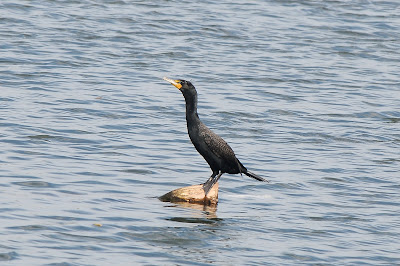 If you get lonely on Staten Island, there are still hoards of sparrows to keep you company.  Here are a couple of SAVANNAH SPARROWS, the most abundant species of sparrow out there (IMHO): 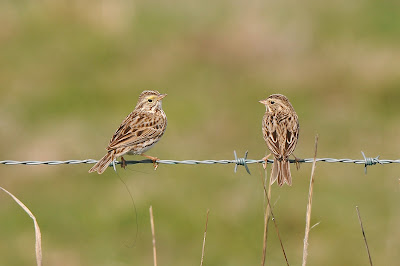 Here is a closer look at one: 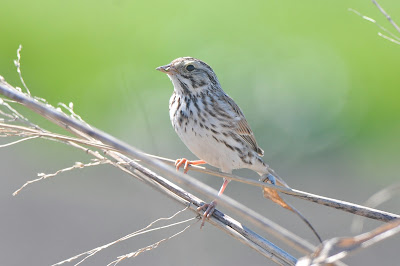 WHITE-CROWNED SPARROWS are probably the second-most abundant species of sparrow out there: 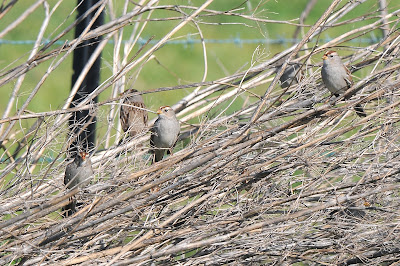 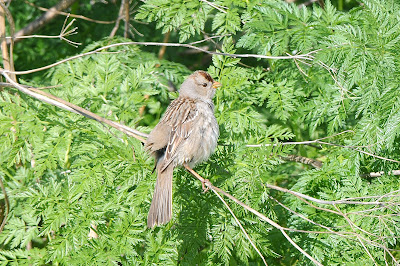 You can relax, the most abundant species of raptor out there is still the NORTHERN HARRIER: 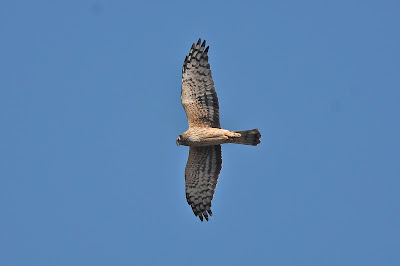 Oh right, answers to the above questions.  First, yes, I see at least some AMERICAN WIGEONS mixed in with the giant NORTHERN PINTAIL flock.  Secondly, the bird preening on the rock is an AMERICAN PIPIT: 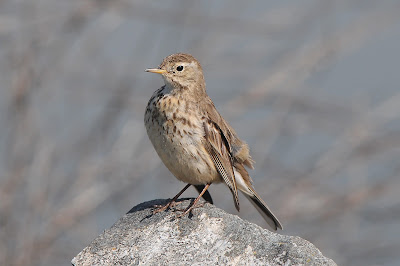