It's hard to believe that I haven't appeased the masses by updating my blog in the last 10 days.  Maybe it's simply because I'm too hard at work birding (work).  Enough of the jibber jabber, let's see some pics.

First up is a EURASIAN WIGEON that was out at Staten Island last week.  Ok, at least it gets called a Eurasian Wigeon here in CA.  Would it pass as a pure bird elsewhere?  I'm sure it wouldn't get looked at twice overseas but what about Iowa or Michigan?  I'll leave that to you guys.  In the meantime, it was really fun to finally pick out a red head amongst the AMWIs: 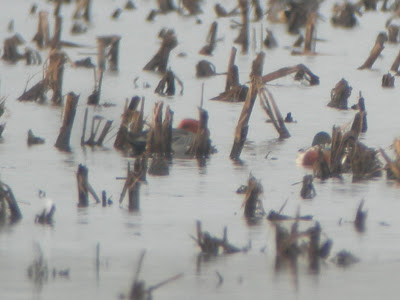 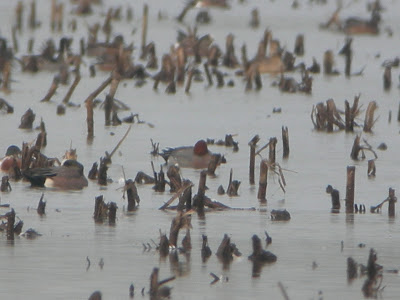 There is an urban lake about 1500 feet from our apartment here in Elk Grove that has hosted a surprising diversity of waterbirds this winter.  I only recently started paying more attention to it... and as soon as I did, I started seeing BARROW'S GOLDENEYES.  Kinda cool even though they aren't very uncommon in these parts.  Here is a female with a COMMON GOLDENEYE: 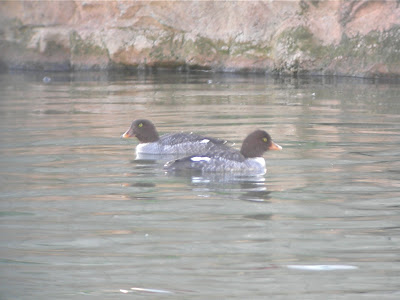 Here is a map of the lake.  Because it's man-made to maximize waterfront property, there are a lot of nooks for birds to hide in.  Birds can be almost anywhere on the lake which makes birding it pretty tough.

View Urban Elk Grove lake in a larger map
Trees around here are budding (and some are blooming).  A sign of spring, sure.  Another sign was an ANNA'S HUMMINGBIRD hard at work on a nest in the tree right outside our patio.  I see that ANHUs can build as early as January so this isn't much of a surprise.  Here is her nest: 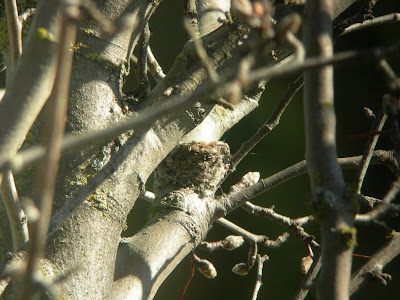 Remember that little lake in town?  I continued to check it later in the week.  Alas, I couldn't relocate either of the BARROW'S GOLDENEYES but this COMMON GOLDENEYE was obliging enough for me to digiscope it: 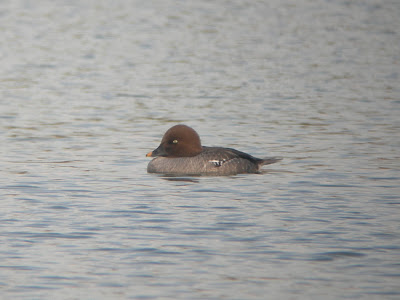 On Staten Island (where I work), it's not uncommon to see thousands of waterbirds in a single visit.  However, scaup are rarely seen there.  I suppose it's because of that that I really enjoy finding scaup flocks on the local lake.  Here are two LESSER SCAUP along with a RUDDY DUCK: 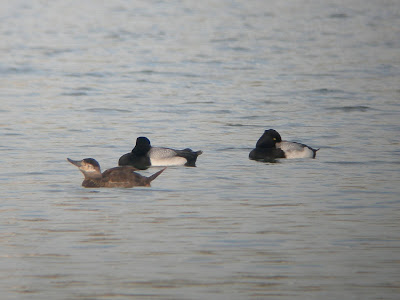 The lake hosts a small flock of COMMON MERGANSERS as well.  Here is a male: 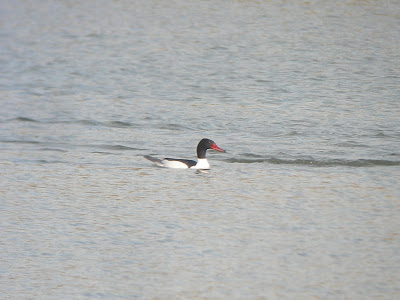 There are a couple of local spots we check on from time to time, one of them being Stone Lakes NWR one exit south of us.  It was there that I snapped this pic of a shorb flock.  Shouldn't be too hard to pick out the lone weirdo, right? 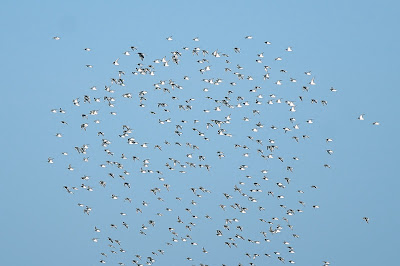 Nothing fancy about the next two photos; two of our most common species.  First up, a SAVANNAH SPARROW: 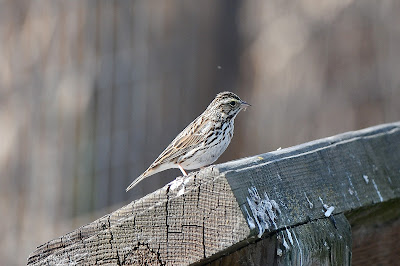 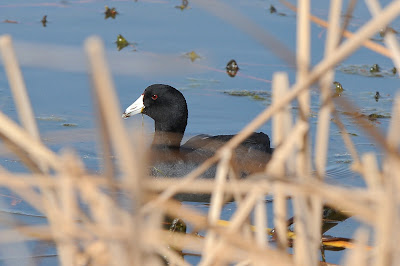 We also check a local park that borders along Stone Lakes NWR (see this post for a map).  There isn't much habitat in the park itself but the path there borders a nice stretch of pasture.  We almost always find the local SAY'S PHOEBE flycatching along the fence: 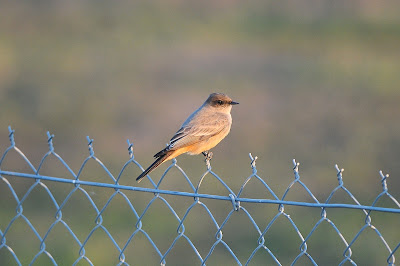 Be sure to check the powerline towers; we spotted this PRAIRIE FALCON keeping watch over the grasslands.  This gives me slight hope for actually seeing a PRFA from the apartment (although we already have PEREGRINE FALCON so I suppose I might be asking a lot). 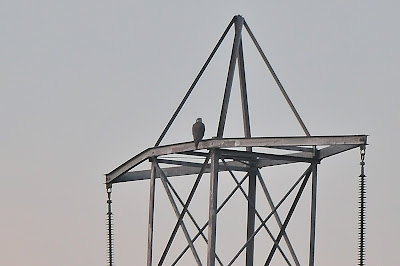 The same grassland hosts a flock of LONG-BILLED CURLEWS that roost every evening in the pasture.  The flock size varies but we've seen several hundred drop in on various evenings.  Here is one on its way: 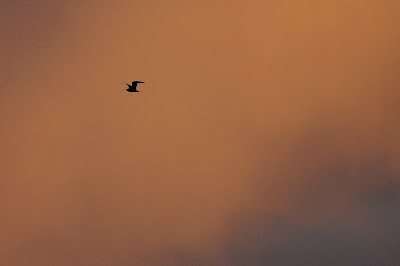 There are no birds in the following two pictures from that park.  Brace yourself.  Just a little fun with the iPhone: 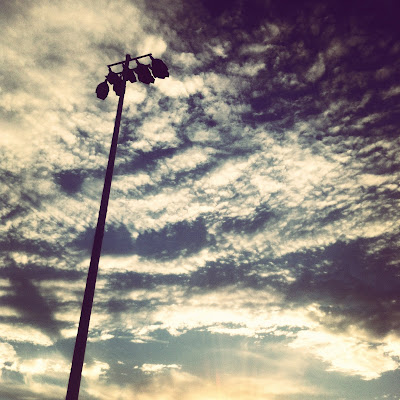 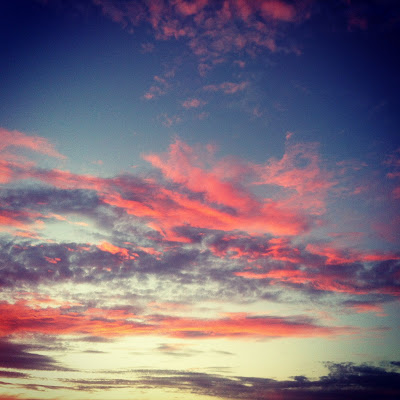 I recently decided to give my 1.4x teleconverter a try again.  Although it gave me a lot of trouble in the past, it hasn't misbehaved yet.  Specifically, I tried it out one morning at Staten Island, first taking a couple of pictures of the endemic subspecies of HORNED LARK that is found in the Central Valley: 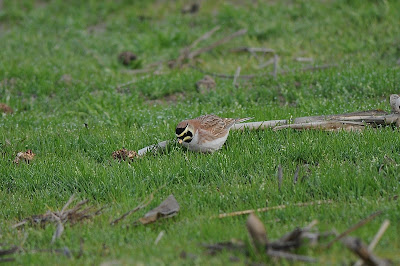 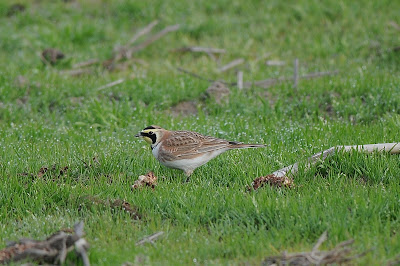 I snapped a pic of this AMERICAN AVOCET just because I was bored and shutter-happy.  I very rarely see this species on Staten Island for some reason: 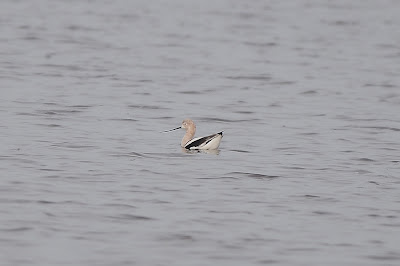 Here is a drake NORTHERN PINTAIL: 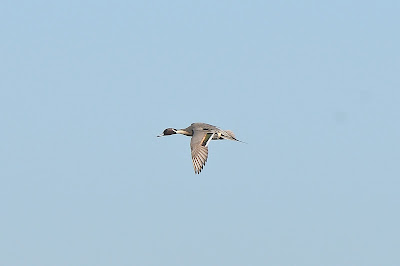 ... and a pair of NORTHERN SHOVELERS: 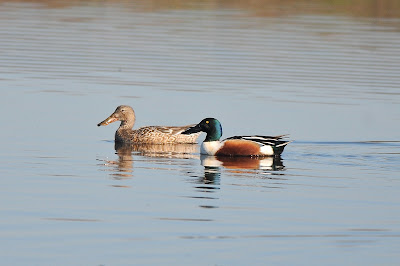 The best picture from that day came from this cooperative SONG SPARROW: 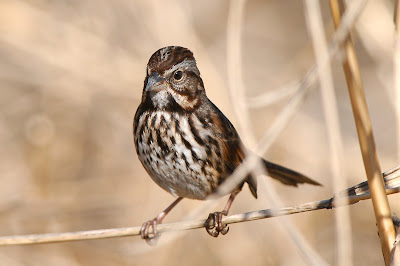 This weekend we zipped down to Kern County for a very specific target.  Thrashers.

Ashley and I looked for LE CONTE'S THRASHERS in Arizona last August but, if you know thrashers, you know that August is NOT the time of year to be looking.  I got lucky and stirred up a very skittish LE CONTE'S near Buckeye, Arizona (where everyone sees them).  However, we didn't get great looks and pictures were out of the question.  I suppose there might be some debate on which thrasher is the "most skulky" but the answer I would give 8/10 times would be LE CONTE'S.  Maybe CRISSAL for the other 2/10?  Anyway....

Some of you know that I started keeping track of the species I have photographed during recent years.  I'm not looking for good photos, just "a photo".  I don't mind that most of them are crap, I'd like to stay more of a birder than turn into a photographer.  Anyway, LE CONTE'S THRASHER was my last thrasher to get a crappy picture of and I kinda wanted to wrap that group up.  Now back to the weekend drive to Kern County....

I used eBird to see where folks were seeing LCTHs.  The first stop instantly (yes, I mean that) yielded a singing thrasher.  Take a look: 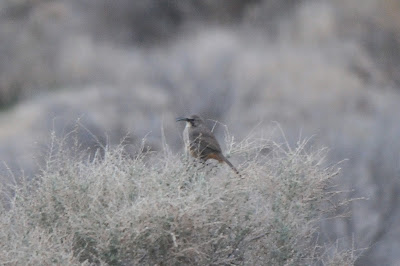 As you can see, the problem is that it WASN'T the kind of thrasher we were looking for.  This was a CALIFORNIA THRASHER.  Double checking the checklists from that spot yielded no records of CATH, only LCTHs.  I don't know the observer and I'm not looking to step on feet... but this makes me wonder.  By the way, this was at the intersection of Gardner Field Road and Gas Company Road just east of Taft.  Moving on to our next stop...
Thanks to the tip from my friend J. Rycenga, we headed south a few miles to the intersection of Cadet Road and Petroleum Club Road to continue our search for LCTHs.
We got out of the car and within a minute heard the song of a distant thrasher.  But where was it coming from?  We both thought it was coming from northwest of the intersection.  We headed that way.  When you see a sign like this, maybe you should turn around? 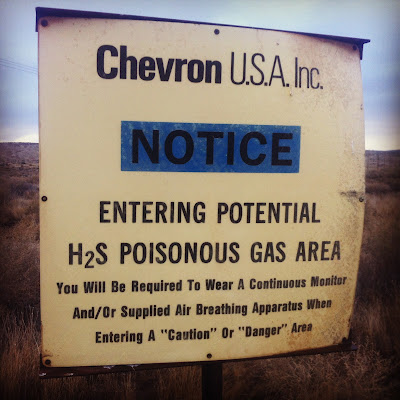 Nonsense.  Before long, we were able to scope a singing LE CONTE'S THRASHER that was perched at the top of a bush.  Success.  Oh, and I got some pics to wrap up the thrashers: 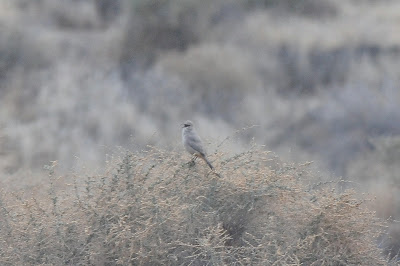 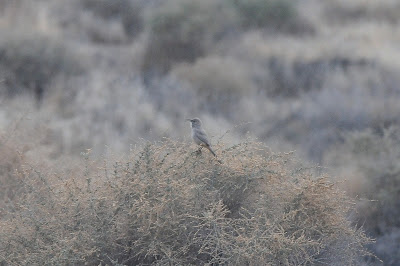 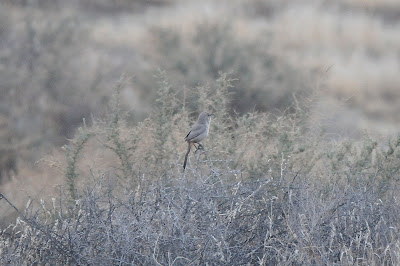 We ended up hearing three different LCTHs from that area.  Here is a map of where we had the perched bird in the scope:
View LCTH in a larger map
After the thrashers, we stopped at a pull off that supposedly had 3-4 LARK BUNTINGS.  I was skeptical on how easy they would be to find.  Here's a pin of where we were headed:
View LARB in a larger map
As we approached the pull-off, I stopped the car on the highway (yeah, it wasn't busy, relax); there was a chunky bird on the barbed-wire fence.  It so happened that this was the bird we were after, a LARK BUNTING: 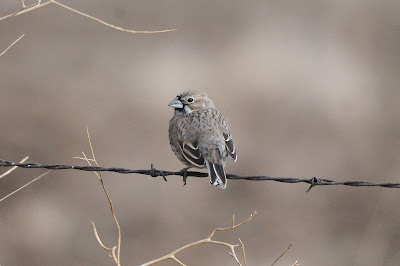 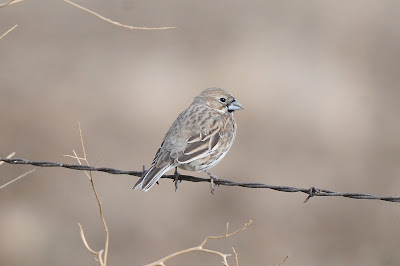 After we enjoyed it for a few seconds, we safely continued to the pull-off where we found sparrows everywhere.  There were dozens (100+?) of WHITE-CROWNED SPARROWS present, such as this one: 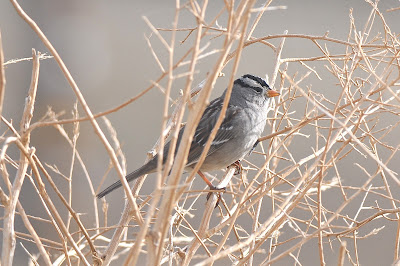 There were also dozens of LARK SPARROWS: 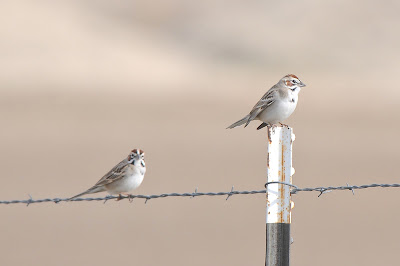